Hello from the other side of Christmas! How was your holiday? We had a great one (as you will see below) and as much as I wish the season could last just a *little* longer, I’m feeling ready to close out the month—but first, a recap! 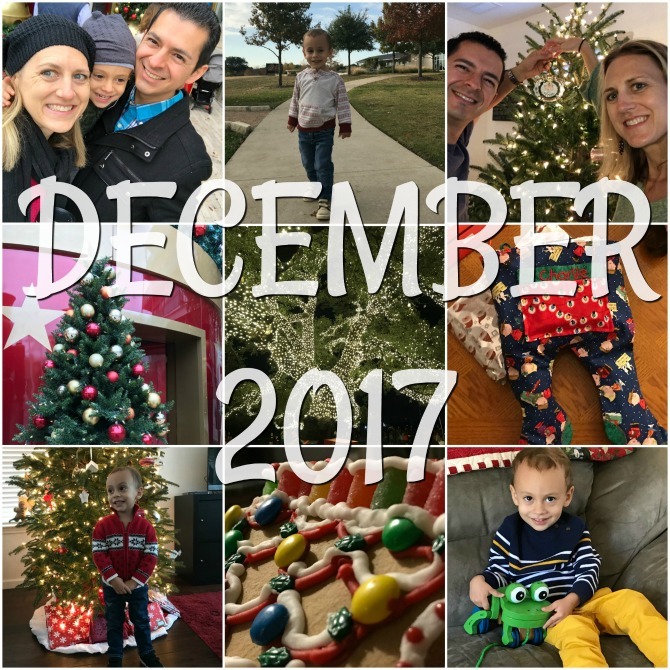 I had expected my reading would slow down a bit during this busy season, but all I’ve wanted to do lately is curl up in front of our Christmas tree with a good book. This month I suffered through the worst book I read all year as well as one of the best. I learned everything I needed to know about the art of negotiation and was touched by the story of an adult son who connected with his dying mother through books. I’m currently reading this delightful novel as well as this parenting book, which will check off the first category of my 2018 Reading Challenge (more to come on that next week!) 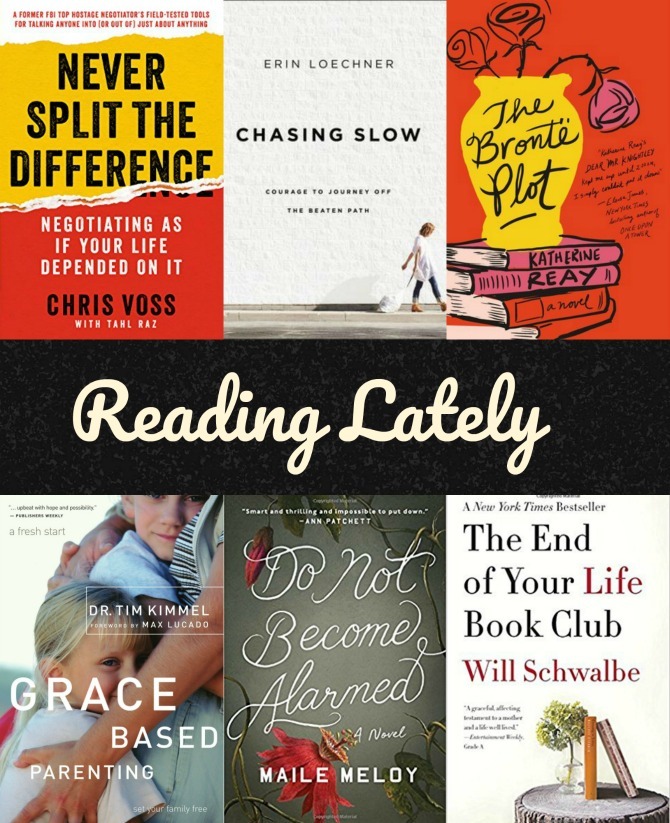 We took Charleston to see Coco for his first movie theater experience! He’s been watching the trailer for months and we’ve all been looking forward to seeing it. Unfortunately it wasn’t a big hit with him (although he did enjoy the theater’s reclining seats), but Luke and I LOVED it.

The story of a boy visiting his dead ancestors and trying to reconcile his loves for music and family is humorous and sweet. I enjoyed the window into Mexican culture, which is something that has always interested me. And the film is so beautiful! Even the skeleton characters are tastefully rendered rather than gruesome. With its vibrant colors and soulful music, Coco is a true celebration of the arts.

I was on the fence about seeing a movie about the Day of the Dead, but I’ve learned to trust Pixar’s creative genius, and the studio pulled through once again! 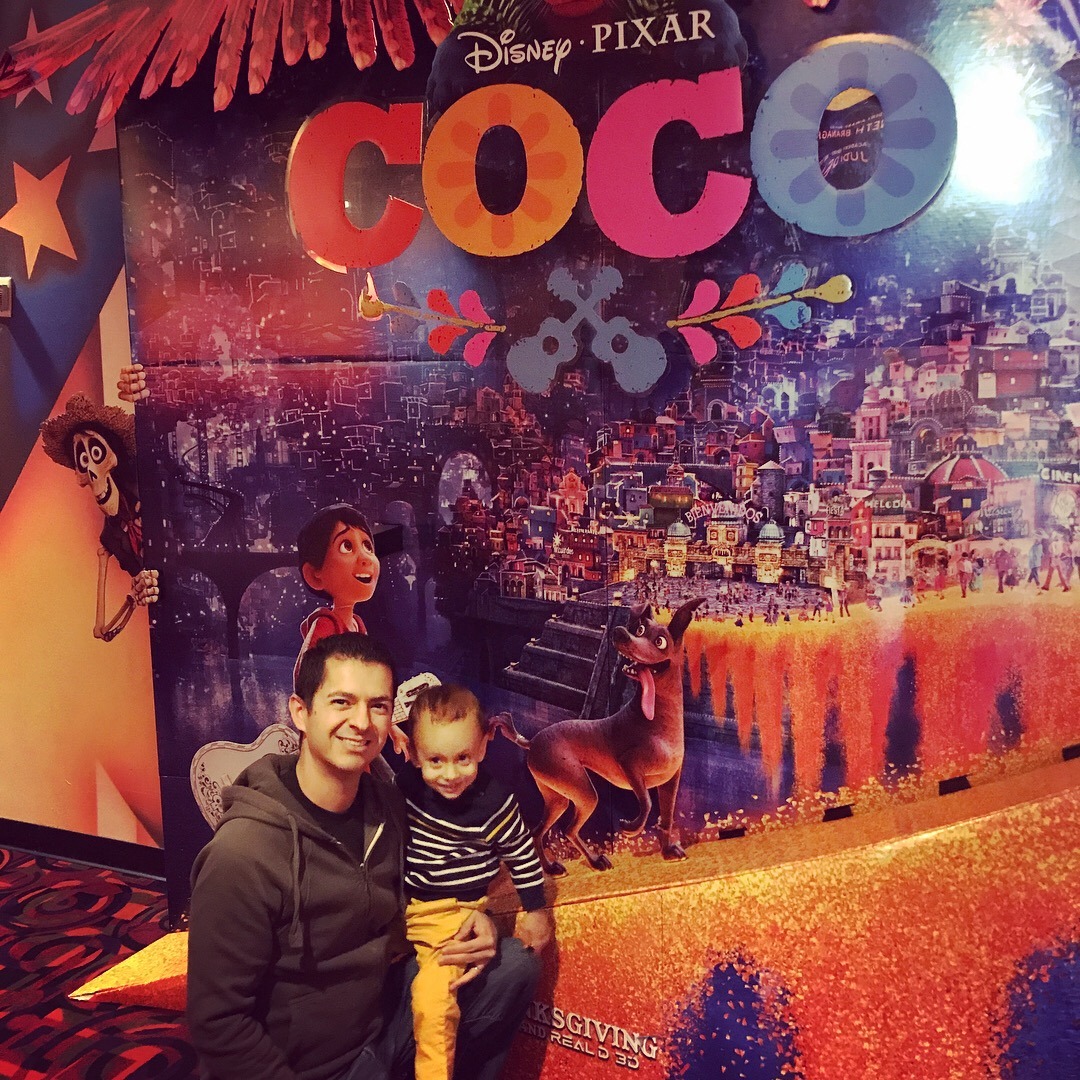 We’ve also been doing our part to expose Charleston to as many Christmas movies as he’ll sit through. (This has been a big shift from our normal no-screen policy; he’s in for a rude awakening come January!) His favorite has been Elf, but we’ve also watched Rudolf, The Santa Clause, The Muppet Christmas Carol, Frosty, and A Charlie Brown Christmas. I haven’t been able to resist showing him parts of my two favorites (White Christmas and It’s a Wonderful Life) and he can’t get enough of the classic scene from IAWL where everyone dances to a song “named after him” and then ends up in the pool. 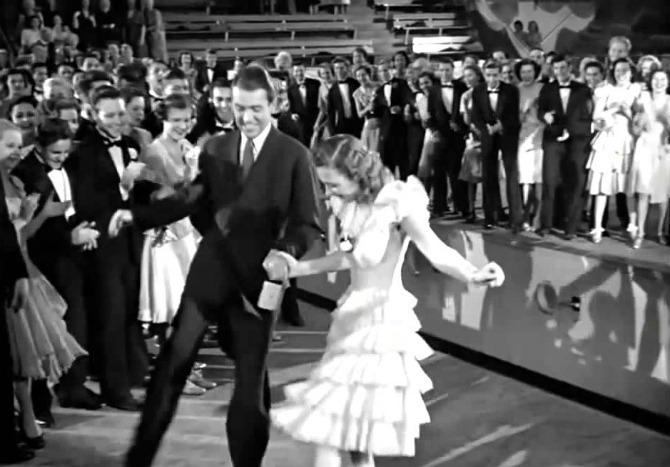 The month of December means ALL Christmas music ALL the time in our house. We’ve been listening nonstop since Thanksgiving and will continue to listen at least through New Year’s, and I’m not anywhere close to getting sick of it. I have my favorites, but really almost any Christmas music will do. We’ve been streaming various Christmas stations through Google Music (there are forty of them!) from morning til night: Classic Family Christmas Tunes in the morning, Cozy Christmas Hits for midday, Instrumental Carols at night. I think the music is what I’ll miss most about the season coming to an end. 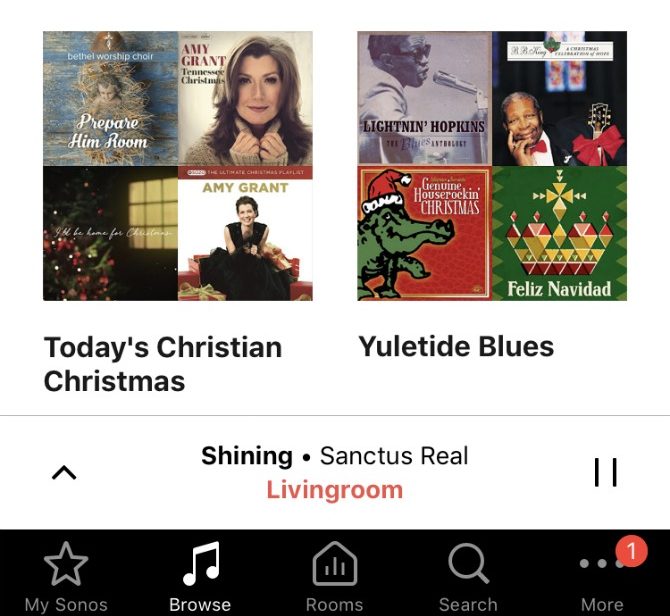 My sweet boy will be three next month—THREE! I’m not remotely close to being emotionally ready to have a preschooler in my home, but I must say that I absolutely love this late-toddler stage. It might be my favorite! (I think I’ve said that every month since he was born….) The best part about this age is that he really is saying the funniest things.

+ Charleston asked when he would get married like Mom and Dad (yep, he’s moved to calling us mom and dad. . . .sob) and I answered, “when you are an adult and you find a girl you really like.” He responded, “but I like YOU the best.”

+ Charleston, needing to get cleaned up after lunch: ”Dad, get the wipes.” Luke: “Can you say that more politely please?” Charleston: “Daddy, can you go and get the wipes to wipe my hands while I sit here with Mama and wait for you to come back?” Looks at me, “that was a lot of words, did you know that?”

+ We had been doing a craft and I asked Charleston to go throw the scraps in the bathroom trash. He went into the bathroom and I heard the toilet flush, then he came out looking bashful. I asked if he had put the trash in the toilet and he tearfully said, “yes, because I just forgot where it was supposed to go.”

+ The day after visiting Santa: “Hmm, we haven’t seen Santa for a while. I think he must be at his high school.”

+On Saint Nicholas Day I told him it was Santa’s birthday. (Yes, I know that’s not historically accurate, but close enough.) He said, “I think he is probably 3. I hope he gets Menchie’s for his birthday. And Thomas cupcakes.”

+ After he had rearranged some furniture in his room: ”We need to move the rug back because that is how God made our house.”

+ “I’m putting lotion on my shirt so that it is soft.” (While slathering lotion all over his clothes.)

+ While reading the Christmas story: “God became a baby?! That’s so silly!”

+(For context, we sometimes give Charleston a Skittle as a treat for finishing his whole meal; and he says “can I like?” when he means “may I have?”) After polishing off a HUGE cookie: “I finished aaaaallll my cookie! Now can I please like a Skittle?” 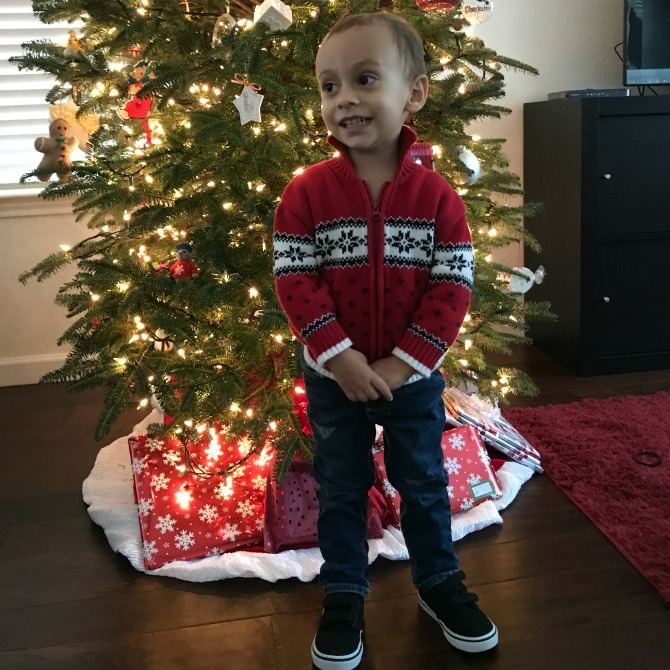 Prepare yourself for lots of Christmas pictures, because holiday festivities took center stage this month. . . .

We inaugurated the season with a trip to the tree lot to pick out a Christmas tree, followed by an afternoon of decking our house out for Christmas. We spent the day munching on Christmas M&Ms and listening to Christmas music while trimming the tree, scattering Christmas stuffed animals around our house, putting out decades-old Christmas knickknacks, and generally transforming our house into our own little North Pole. Every year when we first put our our decorations it seems like too much, but I immediately adjust and by the end of December I’m not ready to go back to our “sparse” home. I’ve always enjoyed a decorated home at Christmas, and it’s even more fun with Charleston, who gets super excited about the lights and all the other decor. 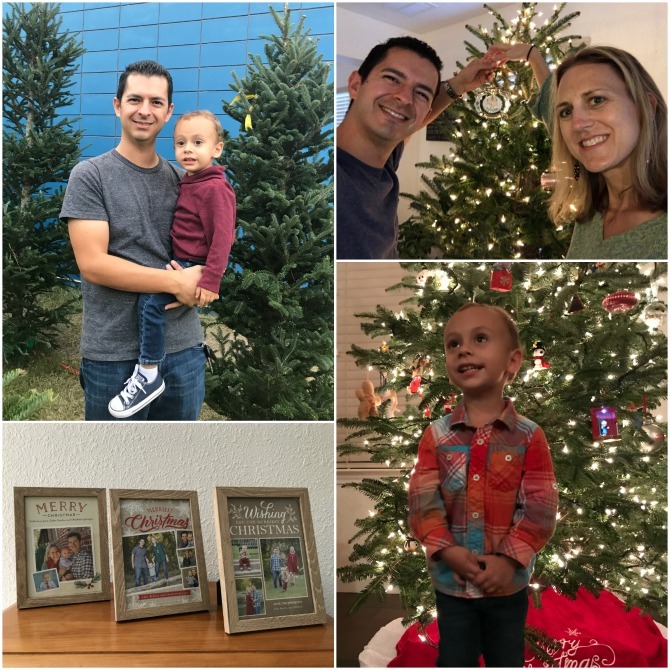 As tempting as it is to go into hibernation mode during this season, we did our share of seasonal activities around town, too. We attended our city’s tree lighting, which was unseasonably warm. We laughed about how cold it was when we attended the same event last year. (We weren’t laughing the following week when we had snow!) It was too crowded to ride in the horse-drawn carriages or go in the bounce houses, but we left with lots of fun take-home holiday crafts that filled many afternoons for Charleston and me this month. 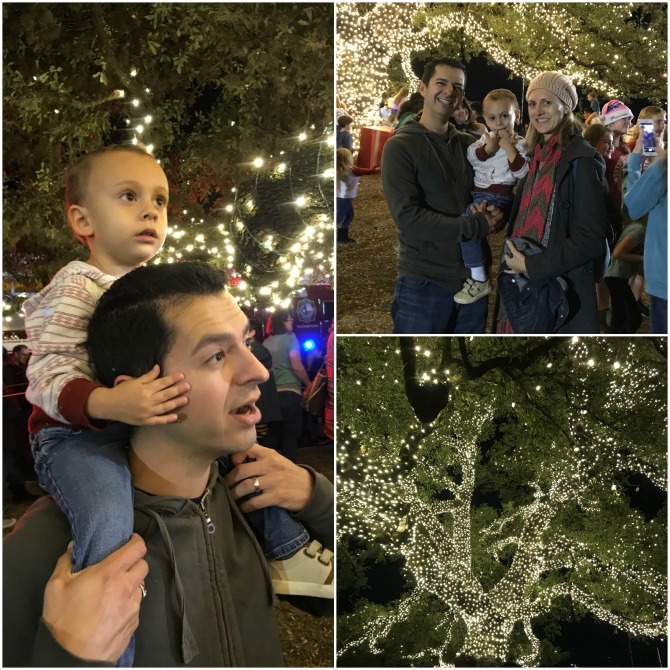 We went to the Christmas Stroll in Georgetown, which has the most adorable town square that was filled with vendors and tons of fun activities. Charleston wasn’t a fan of the (very loud) parade, but we all loved the elaborate Bethlehem walk which had everything from bread-making to crafts inspired by toys from Jesus’ day. The coolest part was when Charleston got to pick a bandana color signifying which tribe of Jesse he wanted to belong to, and was then given a blessing by the woman in first-century costume as she wrapped the bandana around his head. I couldn’t believe there was an activity like that at a secular event! We ended the event with drinks at the sweetest little coffee shop I’ve ever seen; Charleston had his very first cup of hot chocolate (and what would be the first of many hot chocolates over the next few weeks, haha!). 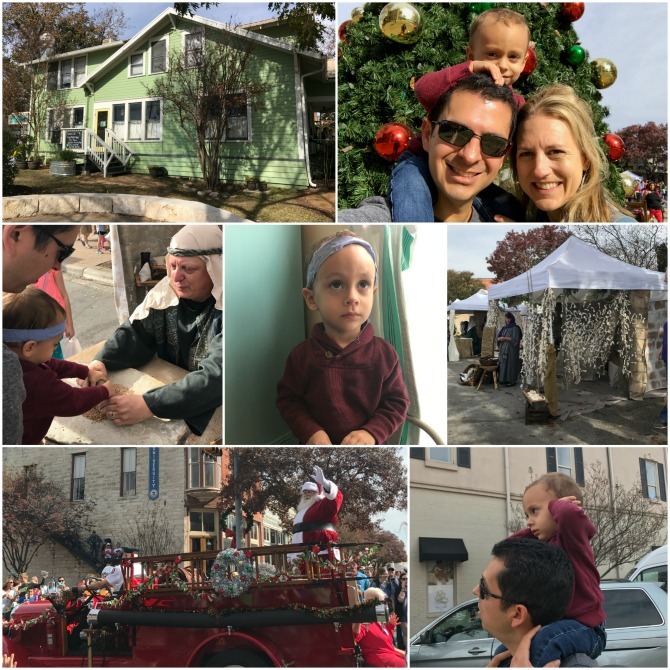 We took Charleston to The Domain to see Santa. Despite arriving at opening time on a weekday morning, we still had to wait in line and Charleston’s excitement turned to trepidation as we waited. But once our turn was up, he was eager to sit on Santa’s lap. They bonded immediately and had the sweetest conversation in between pictures. It’s always a good sign when Santa genuinely seems to enjoy talking with your child. 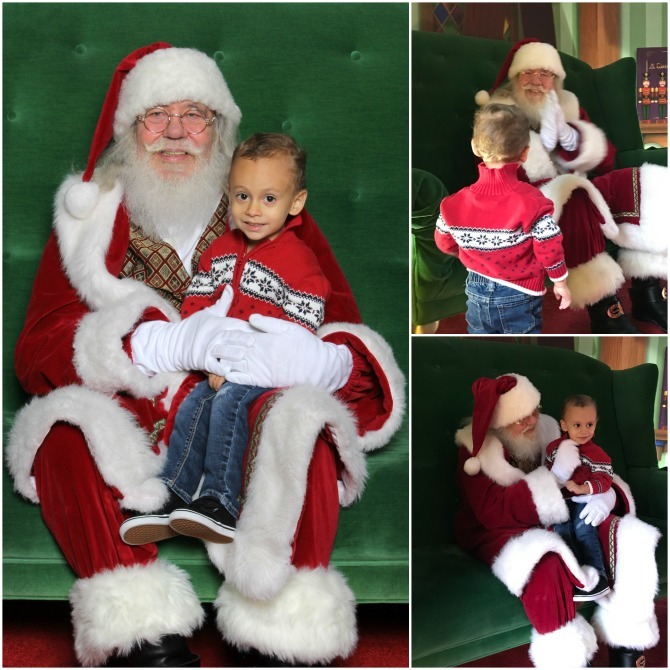 We had SNOW! In Texas! I couldn’t believe it when Luke came bursting out of his home office one afternoon announcing that he’d just seen snow falling outside his window. We weren’t sure how long it would last so we woke Charleston to go outside and experience our first Texas snowfall. (He was unimpressed and just wanted to go inside to get out of the cold.) We were shocked that it continued to snow off and on throughout the rest of the afternoon and evening, and it was cold enough that the snow stuck overnight! We’re a family of cold wimps, so we didn’t actually play in it, but it was such a treat to see. I’ve been in snow while on vacation, but never experienced waking up to snow in my own front yard; it almost made me wish we lived somewhere with actual seasons—almost. 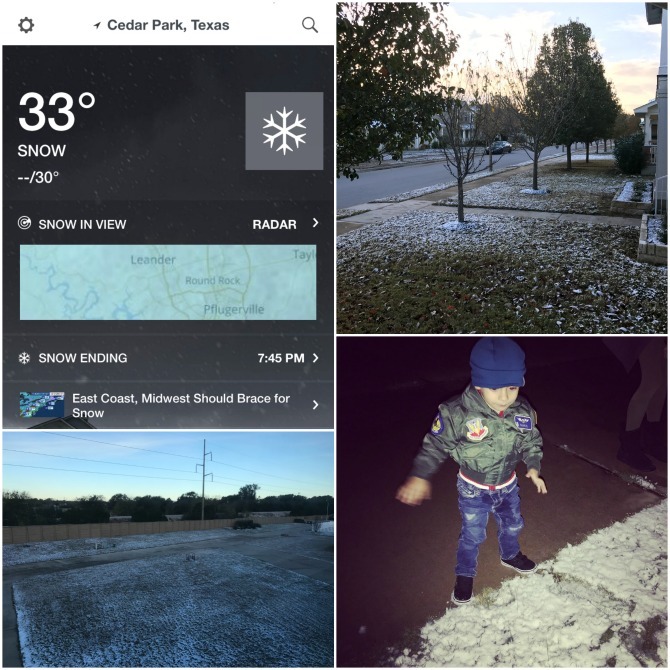 We attended a movie night at a friend’s church, and it was such a fun event! The kids wore pajamas and sat on sleeping bags drinking cocoa and eating cookies as they watched Polar Express. Charleston got scared at a few points in the movie, but he mostly enjoyed it. After the show the children’s pastor led a discussion about Biblical lessons from the movie and gave a few tips to parents on how to have similar discussions with other holiday films. I LOVE this idea! 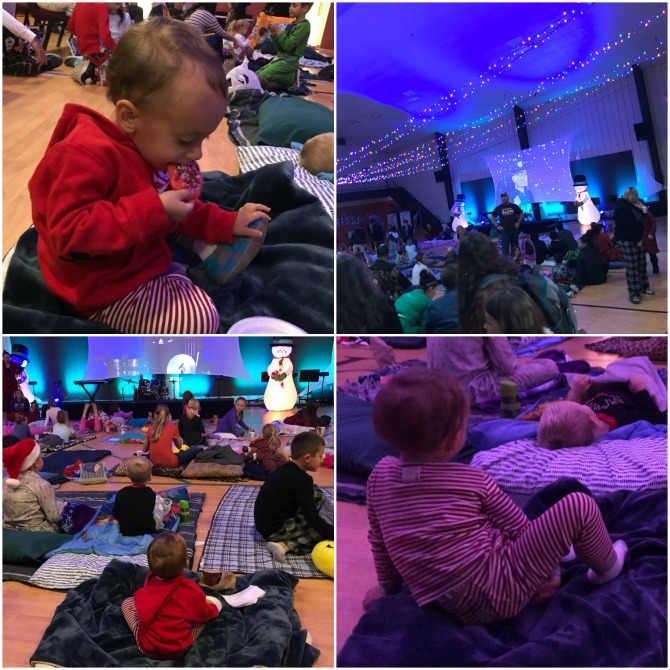 We had so much fun with all of our Advent traditions (which I wrote about here). They truly made the entire month feel special, and Christmas was that much sweeter having counted down the days and spent time discussing the true meaning of Christmas. These were small moments each day, but they were some of my favorites of the season. 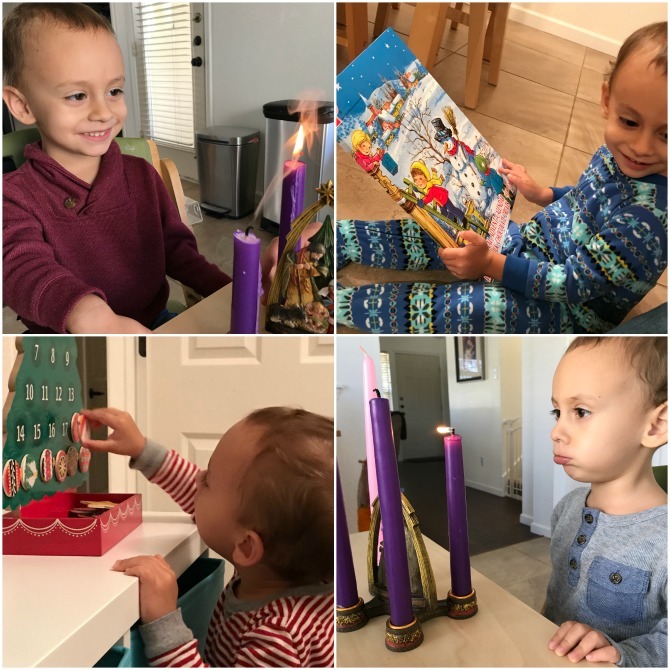 On the morning of Christmas Eve we started what will likely become a new family tradition—we decorated a gingerbread house! I just bought an easy-to-assemble kit from HEB, and the experience was such a fun one! It was the rare activity that kept all three of us engaged for an extended period of time, and we were pretty impressed with our outcome. That afternoon we went to a candlelight service at church, then came home and FaceTimed with my family in California. Before bed we let Charleston open his traditional Christmas Eve gift—a Christmas book and Christmas jammies—and we put out eggnog and cookies for Santa. 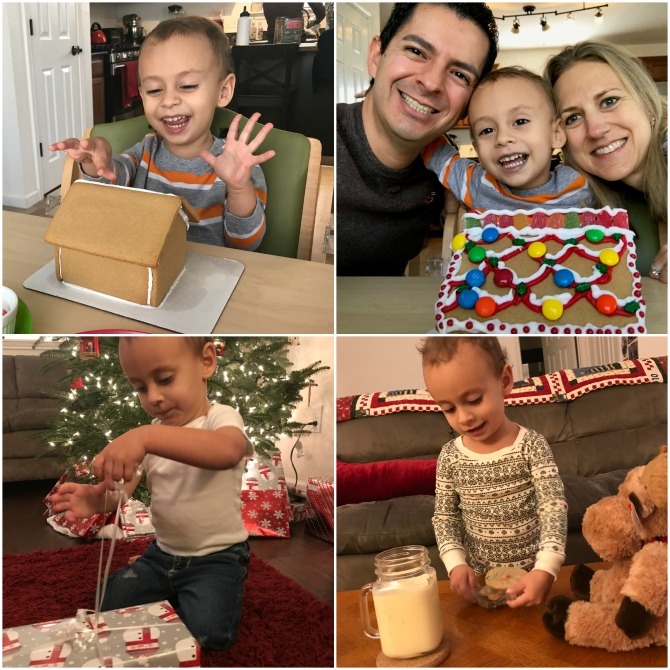 And the next day was Christmas! Charleston let us sleep past 8, but woke up exclaiming “It’s Christmas!” and excited to go downstairs to see what Santa had brought. His excitement turned to confusion and disappointment when he realized Santa himself was not downstairs; apparently he was under the impression that when Santa visited on Christmas Eve, he came to stay! We cleared up the confusion and he perked up with opening presents and then getting excited about Luke and I opening ours. It was a fun and casual morning spent with my two very best Christmas blessings. Christmas afternoon was spent with Luke’s family in Burnet (about an hour from us). It’s still a bit strange and also nice to have family to celebrate with here in Texas. My in-laws spoiled us all with gifts, especially Charleston, who is still the only grandchild—for now; his first cousin will be making his/her debut next July! 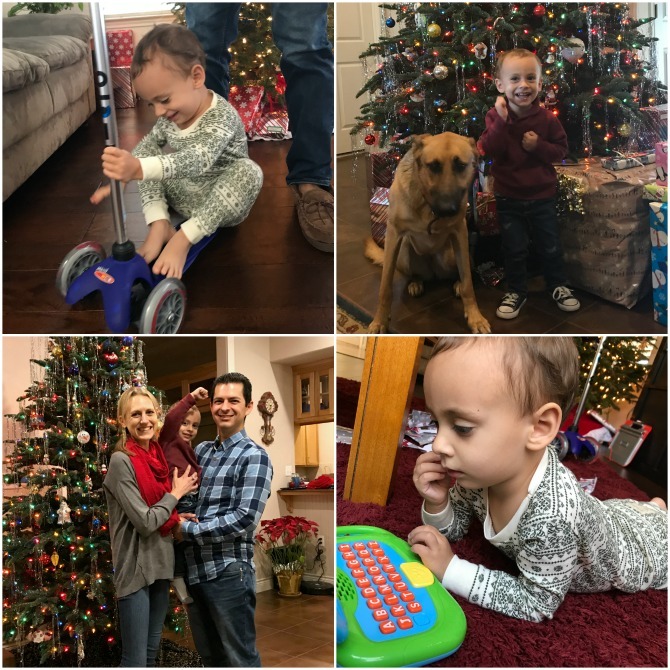 And there you have it—more than you ever needed, or wanted, to know about our family’s December shenanigans. And the month isn’t over! Tomorrow Luke and I will be celebrating our NINTH wedding anniversary. And I still have a couple more reflection-heavy posts for you before the week is up. I’ll see you here Friday for a recap of all I learned in 2017!

As always, I’m linking up with Leigh Kramer to share what we’re into lately!