What comes to mind when you hear the word “tribes”? If you’re like me, this word evokes images of African warriors and ceremonial headdresses. It may bring to mind the Levites, Simeonites, and the rest of the twelve tribes of Israel. But other than that adorable tribal cardigan I’ve been eying, it certainly doesn’t feel like a word with any relevance to me in 21st-century America. And yet, according to Seth Godin, a tribe can be defined as “any group of people, large or small, who are connected to one another, a leader, and an idea.” By this definition, I – along with the rest of my fellow modern Americans – belong to a great number of tribes. As technology – particularly social media – continues to make the world smaller, more and more tribes are being formed. Fueled by the passion that united its members in the first place, a tribe has the capacity to accomplish amazing things; but in order to be of true significance, a tribe needs a leader. In his book Tribes, Seth Godin aims to evoke the leader in each of us so that we are inspired to step up and lead tribes of our own. 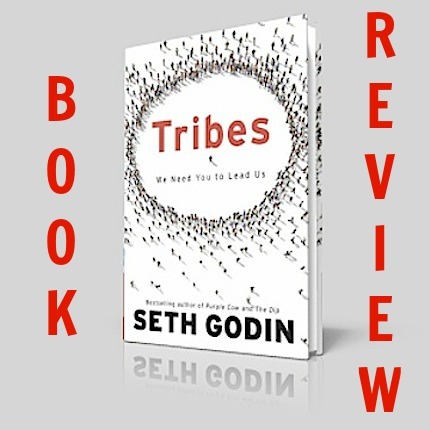 Godin begins his book with an exploration of tribes: why they form, and how the Internet has expedited their growth. From there, Godin moves on to the book’s primary topic: leadership. He elaborates on how to identify and recruit your followers, and encourages leaders to take action, even when doing so feels uncomfortable. Sprinkled throughout the book are real-world examples of unexpected leaders who have effectively led their own tribes.

My initial response upon completing Tribes was, “Wow, only someone with a firmly established tribe could publish a 150-page, chapter-less book filled with redundancies, and sell that book for a suggested retail price $20.95.” Honestly, with its lack of applicable takeaways, Tribes resembles the transcript of a motivational speech more than it does a bona fide self-help book. However, laying aside these first uncharitable impressions, I have to admit that I agree with Godin’s message, and although I don’t necessarily consider myself a leader – and therefore am not the book’s target audience – I did come away having learned a few things. Here are some of my favorite quotes from the book:

“What people are afraid of isn’t failure. It’s blame. Criticism. We choose not to be remarkable because we’re worried about criticism.” —> This point definitely hits home. As a raging perfectionist, I have a crippling fear of criticism that leads me to settle for mediocrity rather than striving to be exceptional.

“The safer you play your plans for the future, the riskier it actually is. That’s because the world is certainly, definitely, and more than possibly changing.” –> An important reminder for those of us who try to micromanage every second of our lives.

“The secret of being wrong isn’t to avoid being wrong! The secret is being willing to be wrong. The secret is realizing that wrong isn’t fatal.” –> Isaac Newton, Steve Jobs, and most successful people were wrong about an awful lot of things before they reached success. There is no failure-free route to altering the status quo.

Tribes was certainly not the book I expected, but Seth Godin is a celebrated leader, and true leaders refuse to be limited by others’ expectations. Despite its brevity and tendency toward repetition, Tribes offers valuable wisdom for the aspiring leader in each of us.