It’s easy for me to become overwhelmed when I think about the vastness of the world and the sheer number of humans populating our planet. In 2012, our world population passed the 7 billion mark—my brain can barely even comprehend a number that large. Amazingly, though, today’s world is becoming smaller than ever. In fact, according to the Six Degrees of Separation theory, every one of us humans is just six steps (or fewer!) from EVERY other person on the planet!

The Six Degrees meme originated in 1929 with the Hungarian author Frigyes Karinthy. Since then it has been explored in many other ways, including books! A few years ago, a pair of book bloggers began a monthly #6Degrees book challenge. Each month, a book is selected as a starting point, and those who wish to join in create a book chain connecting the originating book to six more. This month, in keeping with the March book theme here on the blog, I’m playing along! The designated starting point for the chain is Room, by Emma Donoghue. 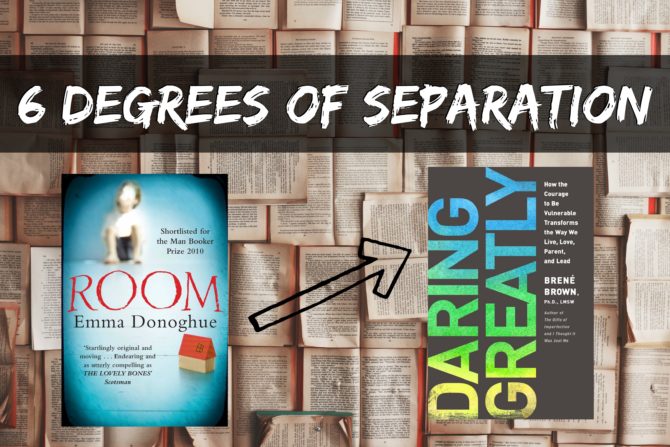 1. Room holds a coveted position on my All-Time-Favorite Bookshelf on Goodreads. Another of my All-Time Favorites is 11/22/63 by Steven King.

3. Big Little Lies was written by an Australian author, as was The Rosie Project by Graeme Simsion.

4. I read The Rosie Project with my book club in California. That year we also read Love Does, by Bob Goff.

5. Another book with the word “love” in the title is Eat Pray Love, by Elizabeth Gilbert.

6. I know from hearing them both interviewed on podcasts that Liz Gilbert is good friends with Brené Brown, who wrote Daring Greatly.

And there you have it: from the story of a child raised in captivity to a book about vulnerability and overcoming shame. Two very disparate books, but—in my world, at least—connected! 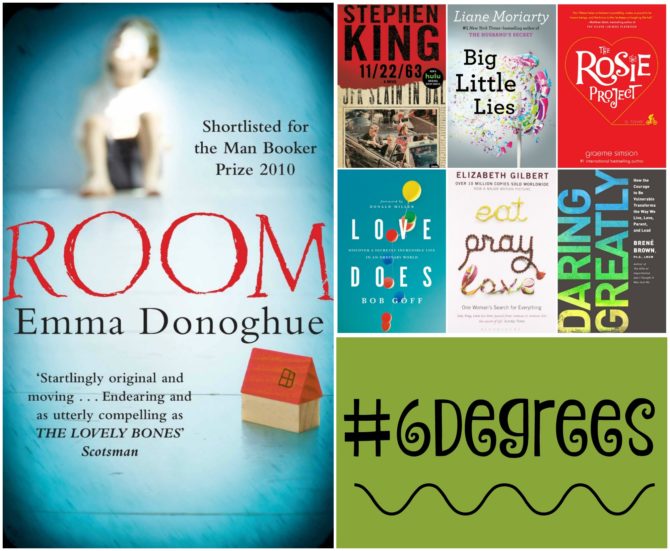 Have you ever played the 6 Degrees game with books? Care to play along with this one? I’d love to hear what your chain would look like: start with Room and let me know where it goes!

This is my final themed post for March’s Month of Books. On Friday I’ll have a monthly life recap for you, and next week I’ll be returning to my usual hodgepodge of post topics. I’ve had so much fun posing as a book blogger this month. Thanks so much for joining me in my celebration of books! (Of course . . . even though today marks the official end of my all books all the time posting schedule, I have zero intention of completely ceasing my book talk here on the blog. For those of you who are here for the books, they will continue to make a very regular appearance—but I’m sure you could have guessed that already!)