America is, without a doubt, a nation of excess. We have grown obsessed with consumption, and our overflowing closets, expanding waistlines, and blacked out Day-Timers are all indicative of our more-is-more mentality. Whether we are trying to keep up with the Joneses or simply trying keep our heads above water, the result is that we are spending too much of our time, energy, and resources on things that society deems valuable. The worst part is that, rather than bringing about the fulfillment we seek, our excessiveness has rendered us fat, tired, and broke, not to mention oblivious to the needs of the rest of the world. If the aim of this overindulgence is to find peace and happiness, we are failing miserably. Unfortunately, we are often slow to recognize our immoderate tendencies, and even more reluctant to curtail them.

Jen Hatmaker was not like the rest of us: not only did she identify several areas of excess in her life, but she fearlessly fought back against them. Hatmaker’s journey toward moderation is recorded in her book, 7: An Experimental Mutiny Against Excess. 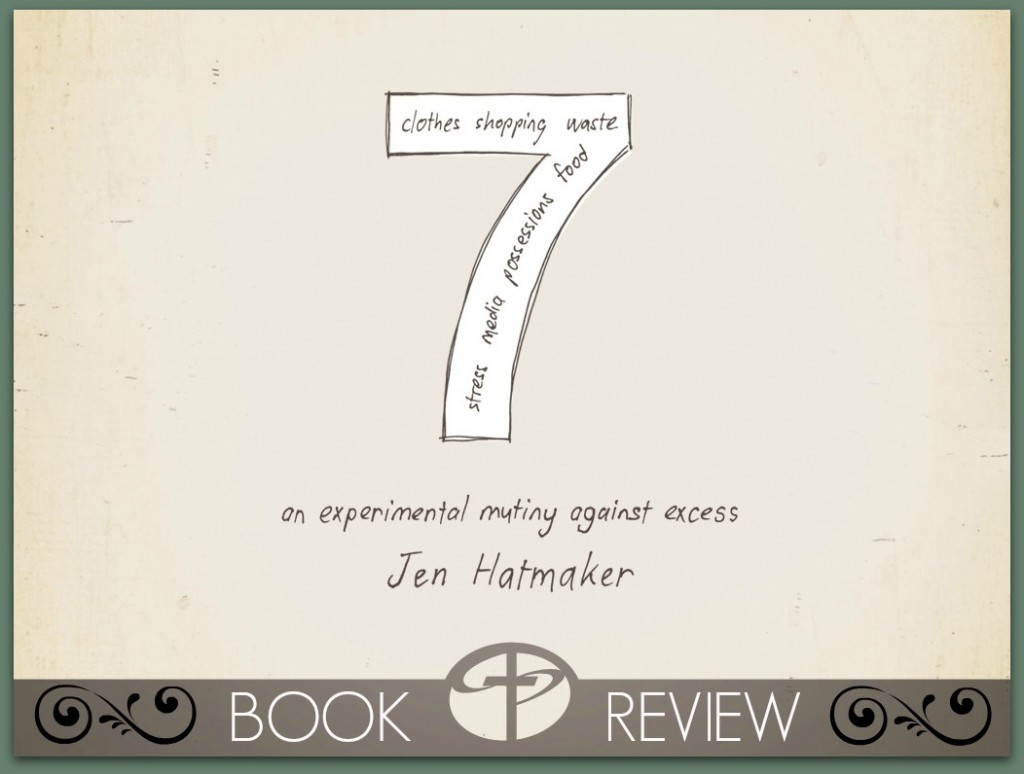 As the wife of a pastor, Hatmaker once thought herself to be above the lure of prosperity and the clutches of consumerism. But when a ten-year-old Hurricane evacuee staying in her home called her family RICH, she realized that he was right: she and her family simply had “too much, and it [was] ruining [them].” The encounter led Hatmaker to identify seven areas of excess in her life, each of which she would address in an experiment entitled – you guessed it – 7. For one month each, she would tackle one of seven topics – food, clothes, possessions, media, waste, spending, and stress – reducing each to seven simple choices. In the first month, she would eat only seven foods, and in the second month she would cycle through seven articles of clothing. On each day of the third month three she would give away seven possessions, and in the fourth month she would eliminate seven types of media. Month five would be about adding in seven new green habits, which would be followed by a month of spending money in only seven preset locations. In the seventh month, she would focus on reducing stress by observing seven sacred pauses each day. Hatmaker, her family, and a group of six friends (“The Council”) would commit to making these sacrifices in order that God may be increased in their lives, transforming them to be more Christ-like in their attitudes and habits.

I admire Hatmaker’s desire for radical transformation, but I have to admit that I found the specifics of her experiment to be rather extreme. That being said, the drastic measures taken by Hatmaker and her friends make for fascinating material. 7 is written in journal format, with semi-daily entries discussing Hatmaker’s progress in the experiment. Delivered in a conversational tone, these anecdotes range from humorous to heartbreaking. While some of the months are easier for Hatmaker than others, she is the first to admit that her “experimental mutiny” is far from perfect: she wears a forbidden jacket on the first morning of clothes month, buys a Suburban when she is working to become more eco-friendly, and cheats during possessions month by hoarding kids’ clothes to be given away. These slip-ups are not only funny, but they make Hatmaker and her experiment feel more approachable.

Interspersed with Hatmaker’s descriptions of her monthly mishaps are her musings and insights related to that month’s topic. Hatmaker comments on how God is using the experiment to transform her own life, and she makes suggestions as to how (and why) her readers might tackle reform. Hatmaker is a talented writer, with an ability to be both convicting and laugh-out-loud funny. Her passion for her subject is sincere, and thought at times her writing strays into “sermon” territory, this occasional preachiness is leveled by large doses of self-depricating humor. It is a rare author who has me both marveling at her wisdom and wanting to invite her to my house to watch cheesy television.

7 is not a book that is meant to be read once and laid aside. It is a book filled with challenge and conviction, designed to uproot the reader from our lives of complacency and overindulgence and propel us toward mutiny against our own excesses. The experiment of 7 is not necessarily a prototype for us to follow (although it could be), but it IS a reminder that shedding excess is not only possible, but imperative if we want to lead the lives God has designed for us. I don’t know yet what my response to 7 will be, but this book definitely has me rethinking many of my personal habits and attitudes.

In the conclusion to her book, Hatmaker writes, “If we say we love God . . . we should live like we believe this. What we treasure reveals what we love.” This message is the heart of 7. We may be made to feel guilty by these words, or we may choose to let them empower us to revolutionize our lives so that they reflect what we truly love.