Items you will find on this month’s list: a few parenting aha! moments, one or two new hacks, and a number of new terms and pithy mantras* that have crossed my path—and made their way into my psyche—over the last few weeks. (*I’m continually amazed by how much I learn from podcasts, the source of most of these “pithy mantras”.)

What you won’t find on this list are the deeper, soul-level lessons that have I’ve been learning the hard way. Y’all, God has been doing some serious work in me this year: just when I feel I’ve arrived at a new level of emotional health or maturity, life throws me another curveball and God and I are back in the trenches, wrestling through issues I’d been ready to cast aside. My friend Cara (a teacher) recently wrote a blog post about relearning old lessons and compared it to what is referred to in the academic world as a “spiral review”. This spiraling back to old lessons and wounds has been brutal, but I am not defeated. The refinement process is never a pleasant one, but I know that God is using it to mold and shape me into the woman He wants me to be. 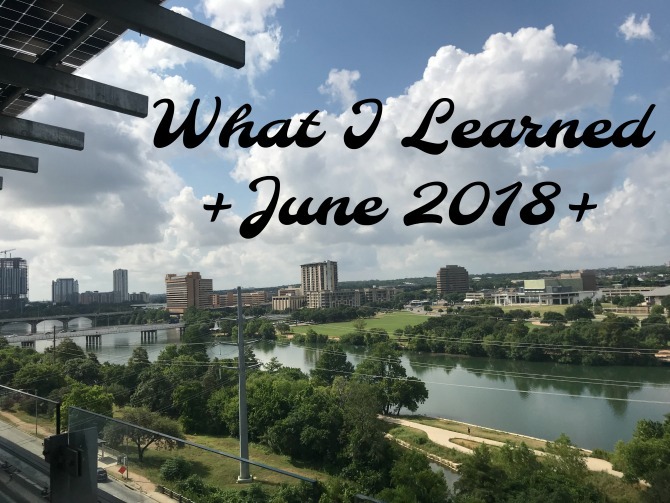 1. The Dunning-Kruger Effect is here to explain why I feel dumber by the day.

It seems as if the longer I live on this earth, the less I really understand it. Apparently, it’s a natural phenomenon, in life and also with specific subjects and skills. Coined by two psychologists in 1999, The Dunning-Kruger Effect is a cognitive bias in which people of a low ability fail to perceive their own ignorance or incompetence. In other words, we’re able to feel smart because we don’t know what we don’t know. (Think: know-it-all teenager.) Only as competence increases do we become aware of how much we have yet to learn. Hence the feeling that we are becoming less competent/learned/experienced, even though the opposite is true.

2. “Sidewalk theology” leads to black-and-white conclusions, and I’m more than a little guilty of it.

Jen Hatmaker recently interviewed Brett Trapp, a homosexual Christian who shared his story on the blog and podcast Blue Babies Pink. During the conversation, Brett describes the problem with what he refers to as sidewalk theology: “There is a category of people in evangelicalism who, they do theology recreationally, even though it has no bearing on them, their person, their livelihood. And listen, when you do theology that way, you can come to very easy black-and-white conclusions, particularly for things that don’t fall in your orbit, so to speak.” My heart sank when I heard this, because he is 100% right. It’s easy for me to have strong opinions about polarizing issues (including gay marriage), because in the end, my opinion doesn’t affect me personally; I don’t have any skin in the game. I’m fairly certain that backpedaling on my beliefs is not the answer, but I do need to remember to approach my beliefs (and especially my presentation of them) with empathy and nuance.

3. Long hair is no match for a toy train.

Last week Charleston was driving his trains across my head (totally normal) and a train got stuck in my hair. So terribly stuck, in fact, that I couldn’t get it out. Thankfully Luke was home and was able to untangle most of it; after about fifteen minutes I gave him permission to cut out what he couldn’t set free. Train: 1, Mama: 0. But from now on, my head is a train-free zone. 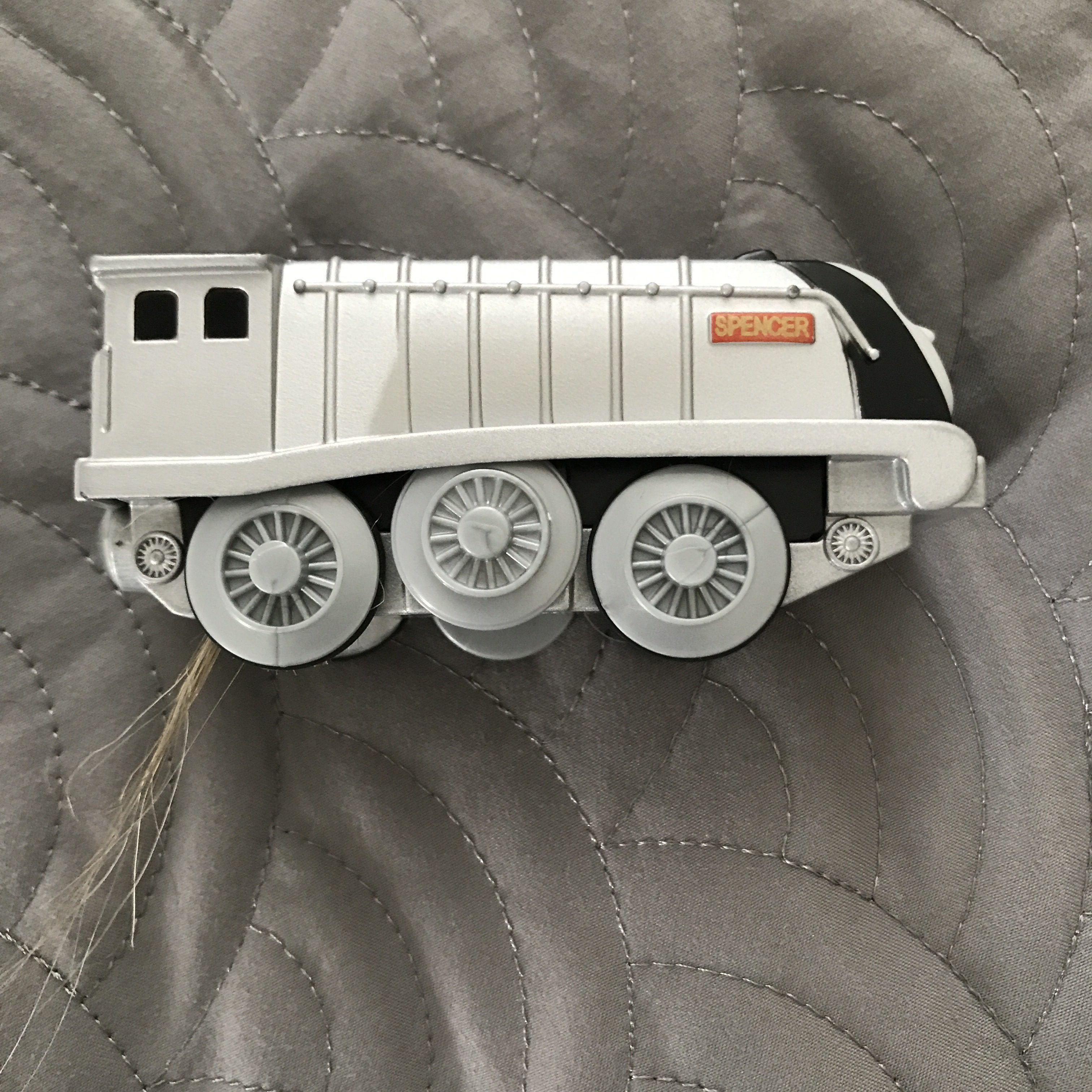 4. The right tool (or toothpaste flavor) can make all the difference.

Toothbrushing is a regular battle with Charleston, which I’m sure is not abnormal with the preschool crowd. Last week we ran out of his usual toothpaste and decided to go with something different. I even let Charleston help me pick out the new paste (of course he picked one with some fun characters on the tube) and it’s been a huge hit. In fact, now he asks to brush his teeth, multiple times per day.

5. It is unrealistic to expect an annoyance-free life.

This is obvious, but I hadn’t realized how intolerant I’d grown of annoyances until I heard this concept mentioned recently. It’s true: in our highly convenient world, we have all grown so accustomed to getting things our way that we are impatient with the slightest annoyance. Unfortunately (or fortunately, if you’re hoping for character development), the one area of life that will always have the potential to annoy is our interaction with people. If we want to be in relationships that go deeper than the casual acquaintance, we’ll need to come to terms with the idea that people WILL annoy us. Sometimes, those annoyances can be ignored, sometimes they may need to be addressed, but most of the time we will probably just need to learn to accept them.

6. Poetry is having a moment.

I’ve been more drawn to poetry lately (thanks in part to my Reading Challenge) and was excited to learn that it’s been experiencing a renaissance of sorts. Nearly 12 percent of adults read poetry last year; apparently that’s a record high. This article explores the reasons behind poetry’s resurgence and offers some great ideas for finding good poetry.

I just finished reading this book by Bush’s twin daughters, Jenna and Barbara. I learned so many fascinating things about our former president, including the fact that he has published a best-selling book containing his paintings of American heroes—his tribute to America’s armed forces. Another fun and totally endearing fact is that he and his daughters send Scripture-inspired texts daily, and that these texts are emoji-heavy. Check out the screenshot of Barbara’s text thread with her dad (pictured below). However you feel about Bush’s politics, I dare you to read those texts without a smile. 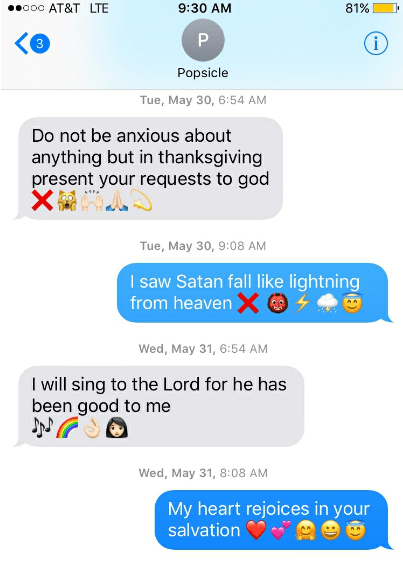 8. A task expands to fill the time available for its completion.

Like the Dunning-Kruger effect, this is another phenomenon I had experienced but not had a name for. Apparently it’s known as “Parkinson’s Law”, and it explains so much: from why composing a blog post takes me a fraction of the time now than it did in my leisurely pre-motherhood days, to how I always seem to have just enough time to complete my necessary to-do’s, but never enough time to fit in the nonessential ones.

9. My quest for the perfect snack bar may be a futile one.

I like to keep a few snack bars in Charleston’s backpack as healthy on-the-go snacks. The problem is that Charleston and I have very different opinions on what makes a good bar. He enjoys a sweet, highly processed bar (he loves these) while I’d prefer him to eat something a little more wholesome, or at least something with less than fifty ingredients. Unfortunately the few bars that we can agree on (like these or these) contain chocolate which is doesn’t hold up in the Texas heat the bars are forced to endure, hanging out in my car. At this point we’ve tried over a dozen different bar varieties and I’m finally accepting that I’m going to have to start making the bars myself, or find a totally different snack.

10. Lace-up shoes for preschoolers just aren’t worth the hassle.

This is yet another parenting battle where I’m accepting defeat. Charleston has a couple of oh-so-cute lace-ups, but now that he’s old enough to handle his own shoes, I just can’t anymore with the laces. I’m slowly replacing all of the old shoes with velcro: not as cute, but you win some, you lose some. And speaking of what I learned about shoes this month . . .

Our MOPS group scheduled a playdate at a bowling alley this month. I was skeptical about the idea of putting a bunch of toddlers and preschoolers in a confined space with all that “heavy equipment” but the kids were able to manage those 8-pound balls, no problem. The alley had bumpers and special ramps so that even the youngest kiddos were able to participate, and they had a ball! Bonus for us moms: they all were positively precious in their little bowling shoes. 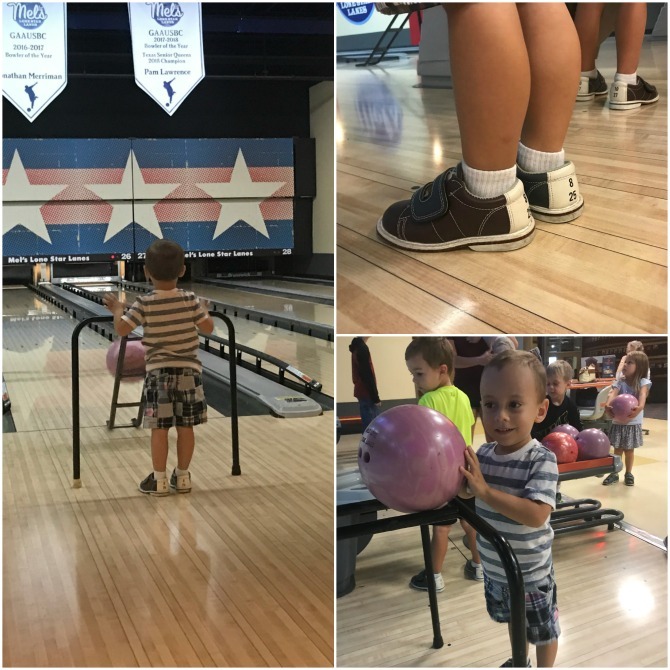 Now it’s your turn: what is one thing (or five things or eleven things) that you learned this month? I’d love to hear about it!