If you’ve been around my blog for long, you know that I read fairly broadly and with many purposes: to be entertained, to learn, to step into the shoes of people whose lives and experiences I would otherwise never understand. . . . One item that is not on my list of priorities when opening up a book is staying on top of current events. For one thing, I find political (and other current event) books stressful and frustratingly polarizing. I also feel that books written about contemporary issues lack the perspective that a time delay can offer.

If the bestseller lists are any indication, I’m in the minority. It would seem that MANY (maybe even most) readers are turning to books to inform their political and cultural worldview. I can see the allure: there is certainly value in staying up to date on contemporary issues, and a book can go far deeper into a subject than a cursory perusal of Internet News Feeds (my own method of staying informed) ever could. Including “a book about current events” in my 2018 Reading Challenge was my way of getting a little more comfortable with this genre—one that I’d like to spend more time with. 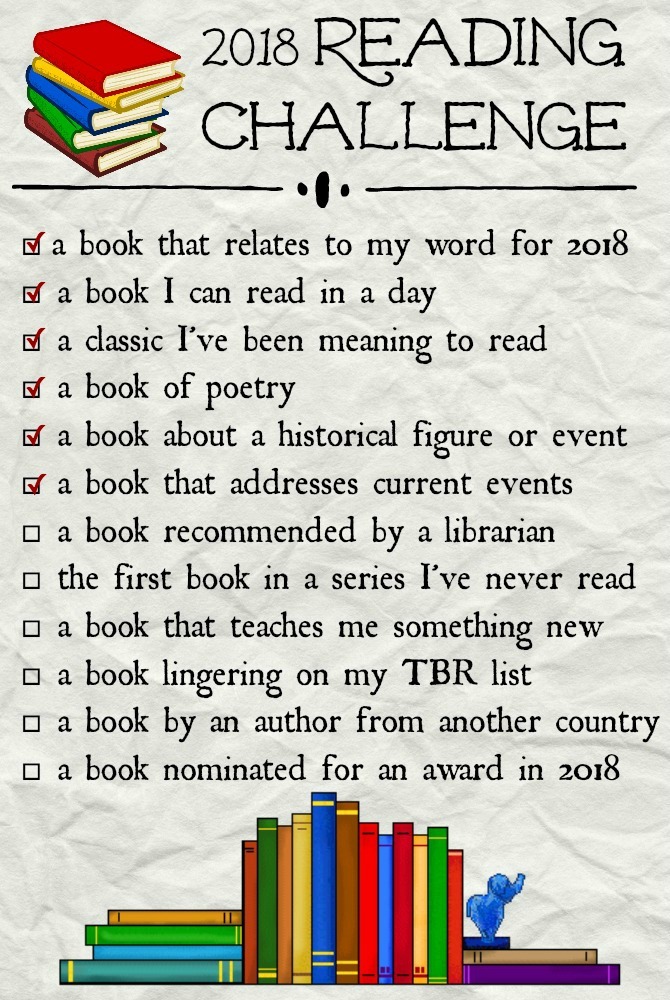 I could have gone any number of directions with this category, but I quickly settled on a topic that I’ve been running into a lot lately: that of racial justice and what it means to be black in America. I’m embarrassed to admit that, until a few years ago, I didn’t realize that racism was still a problem in our country. I considered myself to to be someone who “didn’t see color” and assumed the rest of Americans were of the same mindset. My opinion was rooted in my personal inexperience with racial tension, and it seemed to be corroborated by examples at a national level (such as Oprah’s success and Obama’s presidency). It was only when the most recent instances of police brutality made headlines and the Black Lives Matter movement began to gather steam that I recognized how naive and misguided I had been. I had a lot to learn about the racial landscape in our nation.

Since then I’ve read a number of novels that have touched on race relations (Jodi Picoult’s Small Great Things made a huge impression, as did An American Marriage and That Kind of Mother ). I’ve also made an attempt to read more fiction from authors of color, and I’ve been learning about the subject through podcasts (such as this one). I wish I could say that I was learning first-hand about these issues through conversations with my African-American friends; unfortunately, I do not have any. That needs to change, but for now I’m relying on outside sources for my education. Many of these sources have cited Ta-Nahisi Coates’ Between the World and Me as required reading on the subject of race, so I figured this book would be a good next step. 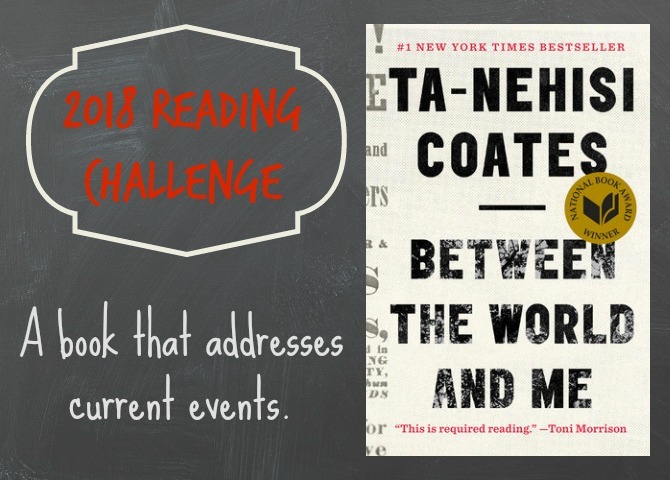 Between the World and Me is written in the form of a letter to the author’s teenage son. In it, Coates shares from his own experiences, as well as from his studies of history and culture, to articulate what it is like to live in a black body in America. Coates begins with a recounting of his youth in Baltimore, where he learned at an early age how to survive in a world where the streets were dangerous and even the schools used fear and violence to marginalize and disempower black individuals. Though he mistrusted the education system, Coates found solace in his personal studies (“I was made for the library, not the classroom. The classroom was a jail of other people’s interests. The library was open, unending, free.”). He went on to attend Howard University where he underwent an intellectual awakening as he studied black history and came to terms with the bleak reality of his heritage. Coates was forced to confront these truths head-on when he learned of the death of fellow classmate Prince Jones. The book ends with a description of Coates’s visit to Jones’s mother, who offered her son all that she could in life and saw that it wasn’t enough to compensate for the color of his skin.

Coates’s writing is poetic and bleak, building on striking imagery and violent metaphors to paint an unflinching portrait of the racial divide that exists in America. Coates’s tone is passionate and unequivocal, refusing to let white people off the hook for the crimes they have committed toward black individuals. Coates believes that race is a construct, reinforced and promoted by those who benefit from a racial hierarchy. This is an unpardonable sin, especially in a nation that prides itself on its promotion of equality. 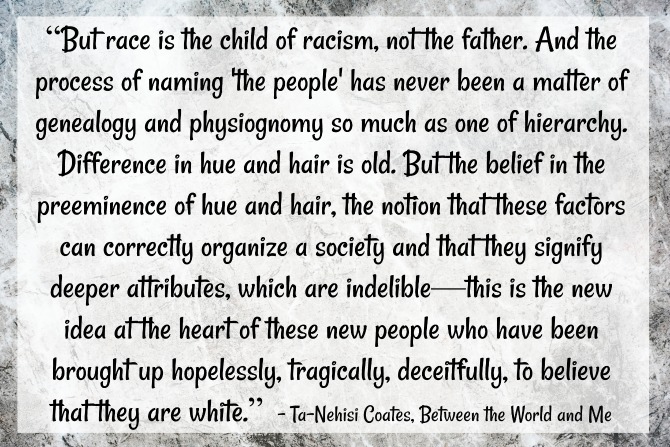 Coates is a powerful wordsmith, and I admire his ability to share his story so vividly and to convey his point so forcefully. His writing left me feeling incredibly uncomfortable, and I believe that that was his intention: to force white Americans to acknowledge our white privilege and to see our complacency for the sin that it is. I was frustrated, though, by the book’s angry and demoralizing tone. There is no inspiration here, no ideas for a plan of action. Coates views white supremacy as an indestructible force and leaves no room for white Americans to make amends. He succeeds in illustrating the existence of a massive problem, but refuses to acknowledge the possibility of a solution.

I am thankful to Between the World and Me for opening my eyes to an issue that needs to be faced. I’m also mindful of the fact that this book is the work of a single individual. Ta-Nehisi Coates cannot speak for all black Americans any more than I can speak for all women, all white people, all Christians, or any other demographic to which I belong. His is one voice among many; it’s a loud voice and a powerful one, and one that we all need to listen to and acknowledge, but it would be dangerous to allow his despairing song to drown out the chorus. I refuse to accept the impossibility of racial reconciliation. I don’t believe that the world between Ta-Nehisi Coates and me is an unbridgeable one. Unabashed truth-telling and the sharing of experiences, as Coates has done here, is a first step towards building bridges. But we cannot allow a basic rehashing of pain and wrongdoing to be the end of our story.

My Rating: 3.5 stars. (Although I’ll admit to feeling very uncomfortable about putting a rating on a person’s experiences, especially those as fraught as the ones shared here.) 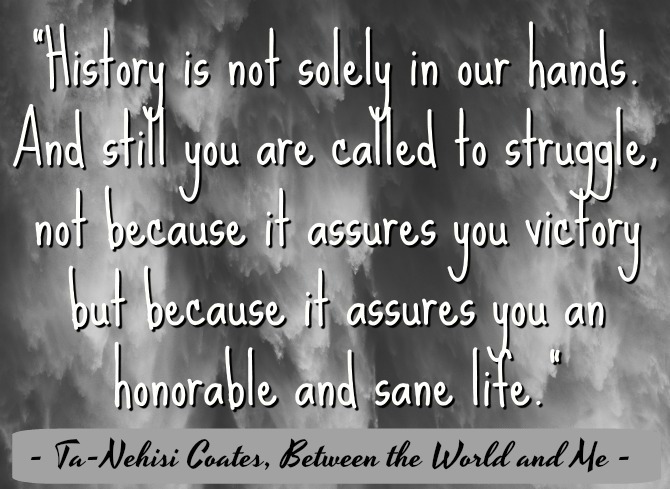 The New Jim Crow: Mass Incarceration in the Age of Colorblindness, by Michelle Alexander

I’m Still Here: Black Dignity in a World Made for Whiteness, by Austin Channing Brown

A Higher Loyalty: Truth, Lies, and Leadership, by James Comey

Evicted: Poverty and Profit in the American City, by Matthew Desmond

Nickel and Dimed: On (Not) Getting By in America, by Barbara Ehrenreich

The Evangelicals: The Struggle to Shape America, by Frances Fitzgerald

Trump’s America: The Truth About Our Nation’s Great Comeback, by Newt Gingrich

The Heart of America: The Battle For Our Better Angels, by Jon Meacham

So You Want to Talk About Race, by Ijeoma Oluo 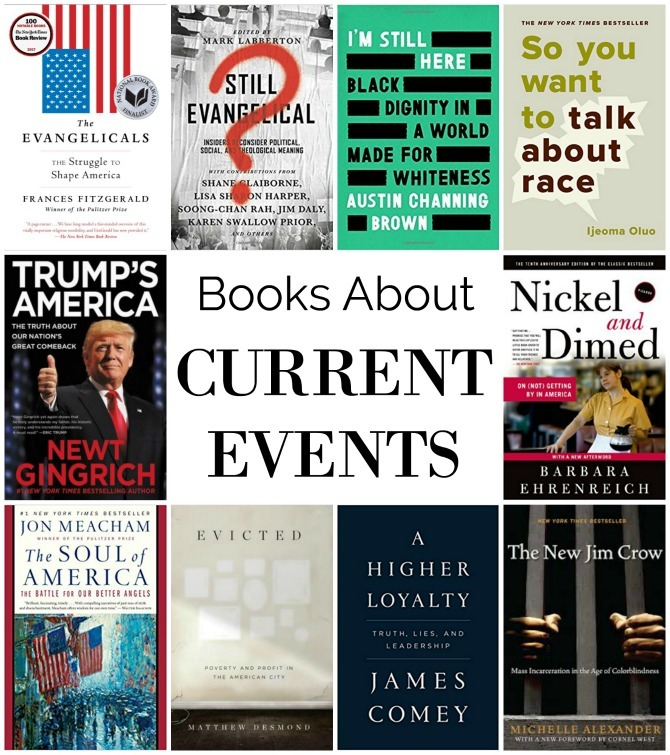 Do you read many books related to current events? Have you read any of the titles on my list? What would you add? Have you read Between the World and Me? If so, what did you think?