After a long and blissfully low-key summer, the month of September—with its whirlwind of activities and new routines—seemed to practically fly by without my realizing it! Life is busy, but definitely in a good way, and the busyness has been accompanied by a plethora of learning opportunities! Here is my random assortment of things I learned in the month of September, broken into three categories. 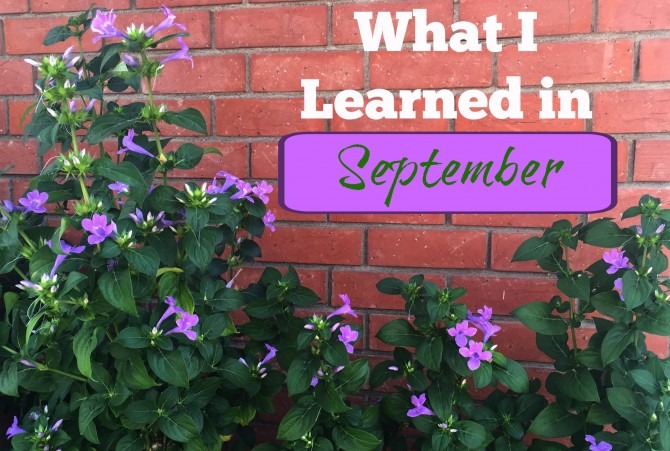 Part One: Books and Reading

1. Every day, 4.75 billion posts go up on Facebook. To put this number into perspective, there have only been 129 million books (with an average length of 64,000 words) published since the beginning of time. In other words, we are publishing more content every day on Facebook than is contained in every book that has been published since the beginning of recorded history!

2. According to one survey, only 76% of Americans 18 and older read at least one book in the past year. This is down from 79% in 2011. One reason for this might be the increased use of screens, which have “changed our reading patterns from the linear, left-to-right sequence of years past to a wild skimming and skipping pattern as we hunt for important words and information.” Advocates for the “slow reading movement” recommend spending 30 to 45 minutes each day immersed in a traditional book.

3. In the year 2011, the United States invested $11.4 billion in public libraries. This number may seem large, but averages out to only $31 per taxpayer, one third the amount the average American spends annually on candy. (Check out this nifty infographic for some more interesting library trivia.) 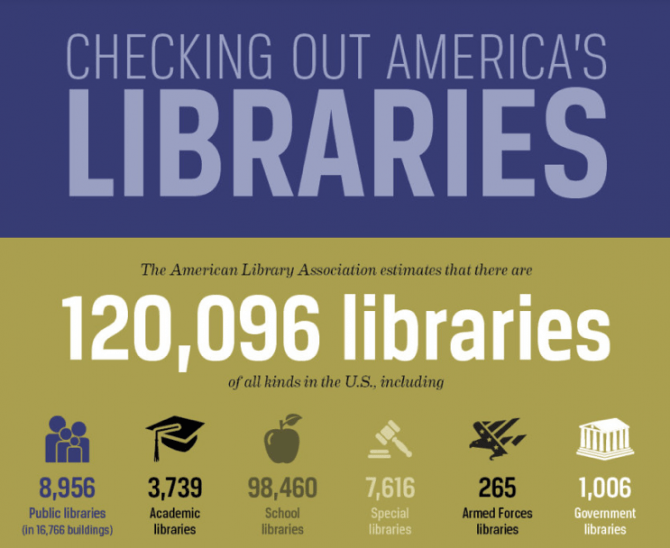 4. An incredible new library project is under way in Norway, where a forest was recently planted that will reach maturity in 100 years. At that time, these special trees will supply paper for the printing of an anthology of books. For every year until then, one author will contribute a text that will remain unpublished until the project’s completion in the year 2114. Margaret Atwood (author of The Handmaid’s Tale) has been named the first contributing author. How I wish I could be alive to witness the culmination of this project; unfortunately, a lifespan of more than 130 years is probably too much to hope for.

5. No president of the United States has ever been raised as an only child. Five presidents (George Washington, Franklin Roosevelt, Gerald Ford, Bill Clinton, and Barack Obama) were technically only children, but all were raised with half-siblings. (For comparison, there are some 14 million only children in America today, representing about 20 percent of all kids. This percentage has doubled in the last fifty years.)

6. Throughout much of the twentieth century, presidential names surged in popularity during a candidate’s election year or first term of office, but since Kennedy, no president has had a perceptible impact on baby-naming trends during his administration. The one exception is Jimmy Carter, whose presidency had a negative impact on the name, causing it to drop out of the top 1,000 in 1978 and 1979 (the only years it hasn’t charted for more than a century).

7. The Obama White House refuses to comment on the source of its coffee and how it is prepared. Regardless of the administration’s coffee preferences, the White House’s chief occupant is supposedly not partaking: President Obama is not a coffee drinker, and instead is partial to tea.

8. It is very difficult to complete a baby registry without knowing the baby’s gender! We tried to register at Babies R Us before we knew we were having a boy, but were overwhelmed by the number of items that come in only pink or blue. Our initial plan was to keep our registry entirely gender-neutral so that all of our purchases would be relevant for future children, but this proved to be an unattainable goal. We ended up registering for the basics, and returning to the store to finish up after finding out that we have a BOY in our future.

9. It’s always a good idea to wear waterproof mascara to a wedding, especially if the groom happens to be your younger brother. This is even more essential if (hypothetically speaking….) you are pregnant and predisposed to involuntary tear fests. I may or may not have learned this lesson the hard way.

10. Junior Highers are actually pretty awesome. Earlier this year, I shocked myself when I accepted a job teaching Junior High Language Arts for a homeschool immersion program; I’d never worked with this age group before, and I spent the summer terrified by the prospect of wrangling a classroom of hormone-ridden adolescents. My fears proved completely unfounded: the students in my class are smart, enthusiastic, and a whole lot of fun. I love how far I am able to go with them academically, and though they may not be as cute as the little guys I’m used to working with, our classroom conversations are much more fulfilling. It’s still pretty early in the year, but I think I might have found a new favorite age group!

I hope you, too, had a wonderful September filled with memories and lots of learning! Here’s to a great October! And head on over to Chatting at the Sky to read what other bloggers learned this month.