This weekend our family will celebrate our Two Month Anniversary as Puppy Owners. To be completely honest, it has felt much, much longer. These two months have been a huge learning experience for me, and I wanted to share a few lessons and takeaways here—both for personal documentation purposes, and also to inform any of you who might be thinking of getting a puppy. For those of you who have personal puppy experience, this post will likely give you a good laugh, or at the very least bring back some memories of your own days with a pup; I just hope it doesn’t stir up any traumatic ones! 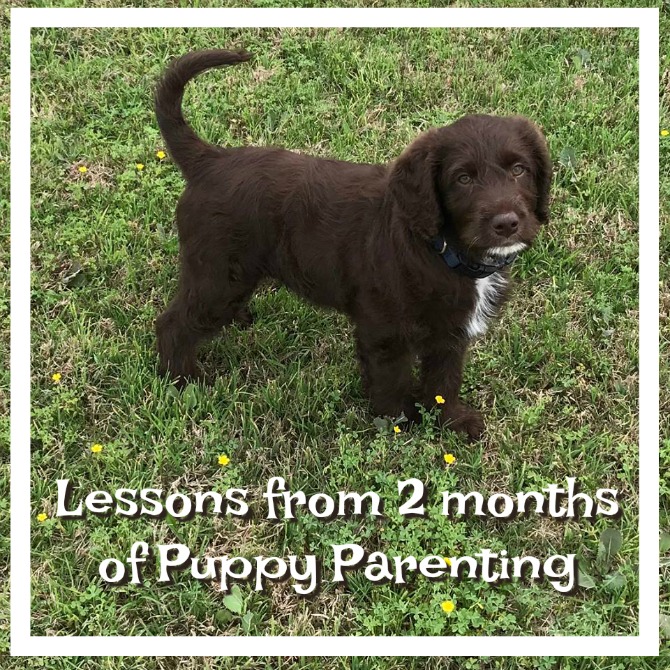 I’ve never owned a puppy. I grew up with a Golden Retriever, but my parents had gotten her a few years before I was born, so she was well into adulthood by the time I came along. When I was in college we adopted a 2-year-old greyhound; he was a great dog, and though he had his own unique set of issues, he was well beyond the puppy stage. As for Luke, he had many dogs growing up, and a number of them came into his family as puppies. But they were all outdoor dogs, being raised alongside other older dogs; we now realize that Luke’s puppy experience was very different from our own situation of having an indoor puppy, and raising him as a singleton. 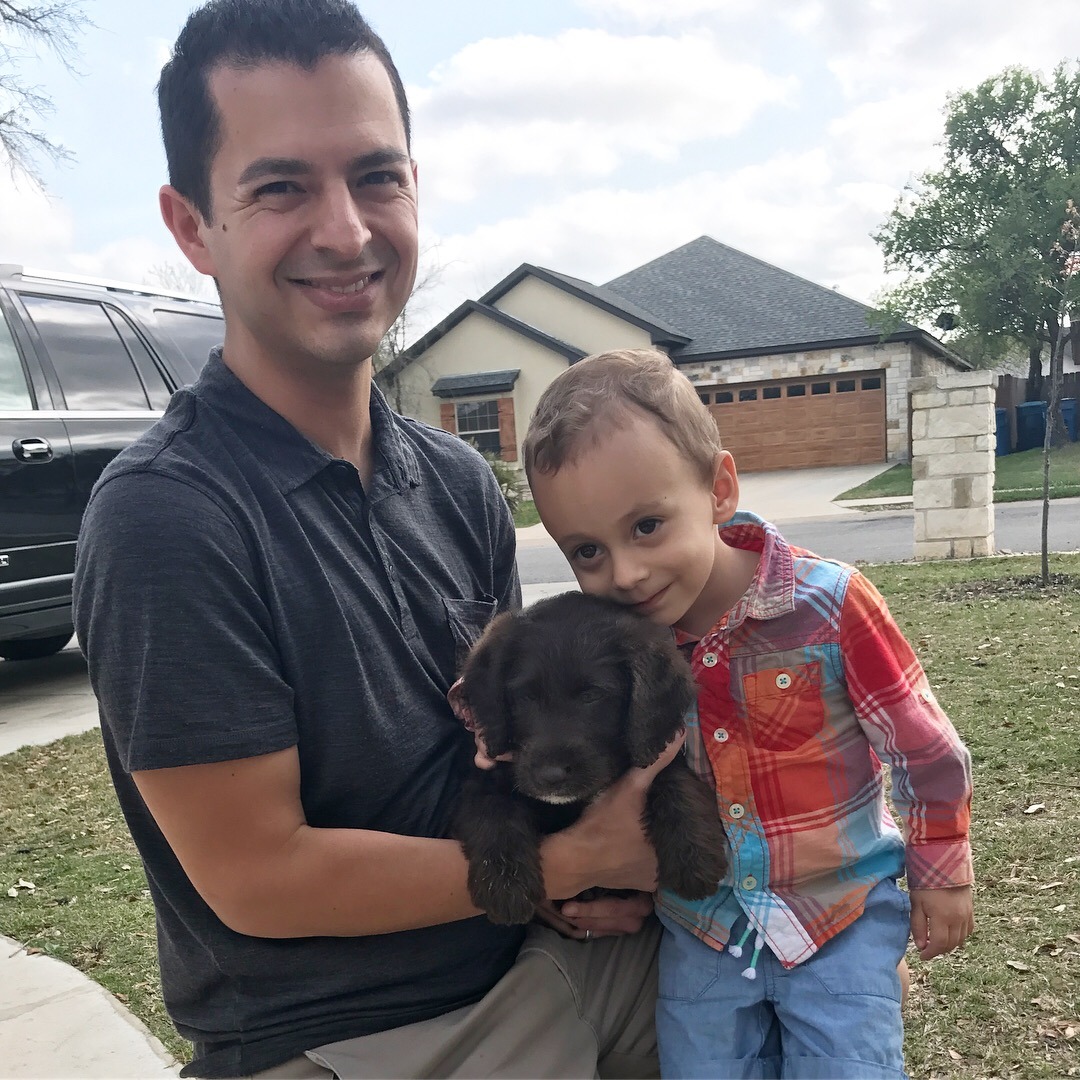 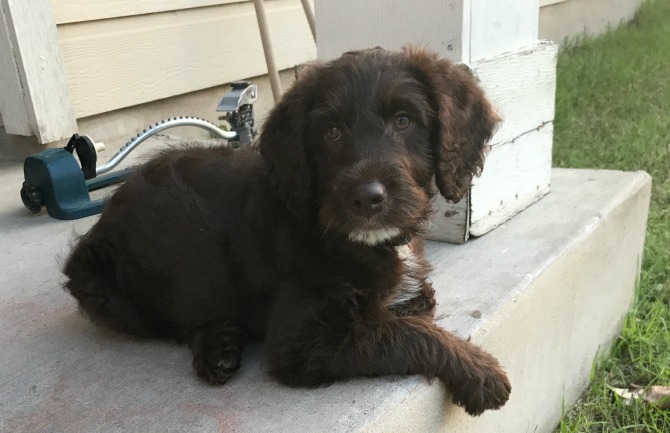 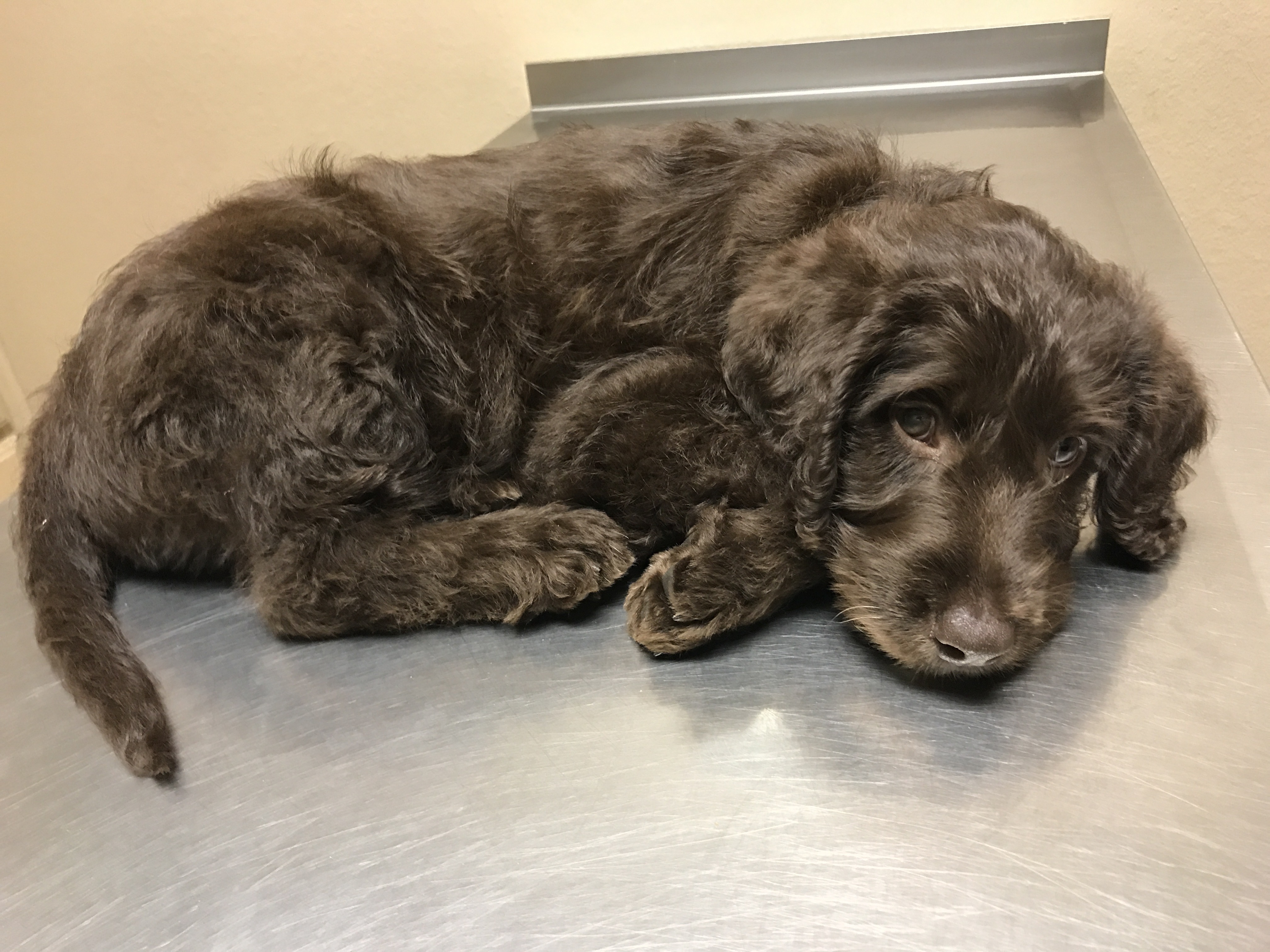 How Puppies Are Like Babies (And How They’re Different)

Before we brought Arlo home, we were constantly told by other dog owners that bringing home a puppy was exactly like having a newborn. I was skeptical. How could a (mostly self-sufficient) four-legged little fur ball be anything like parenting a brand new human? I’ve spent the last two months thinking about ways that parenting a baby is similar to parenting a puppy, and how they are different. Spoiler: I’ve determined that a puppy is much more like a toddler than a newborn. 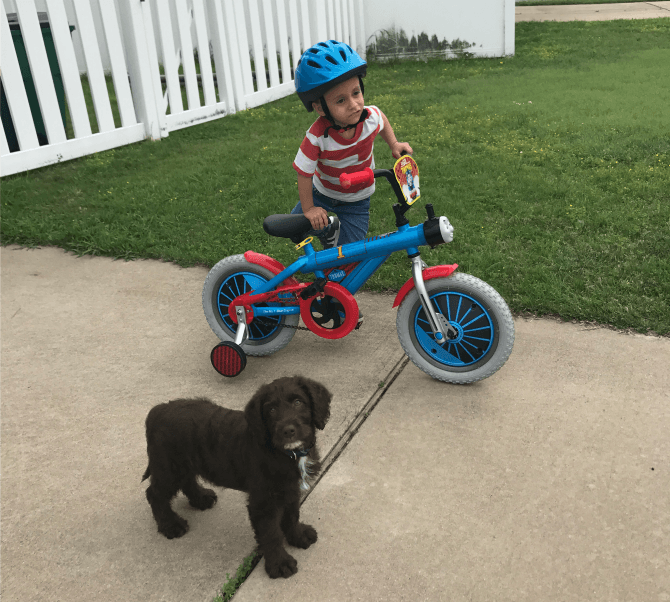 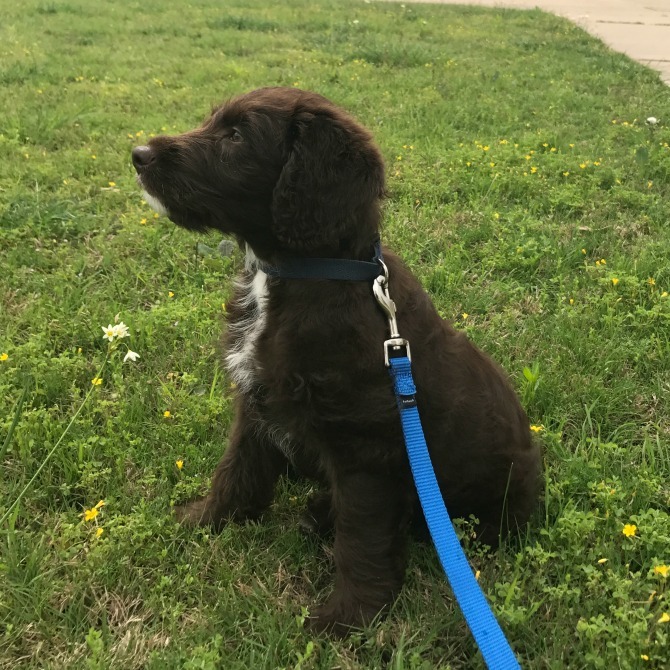 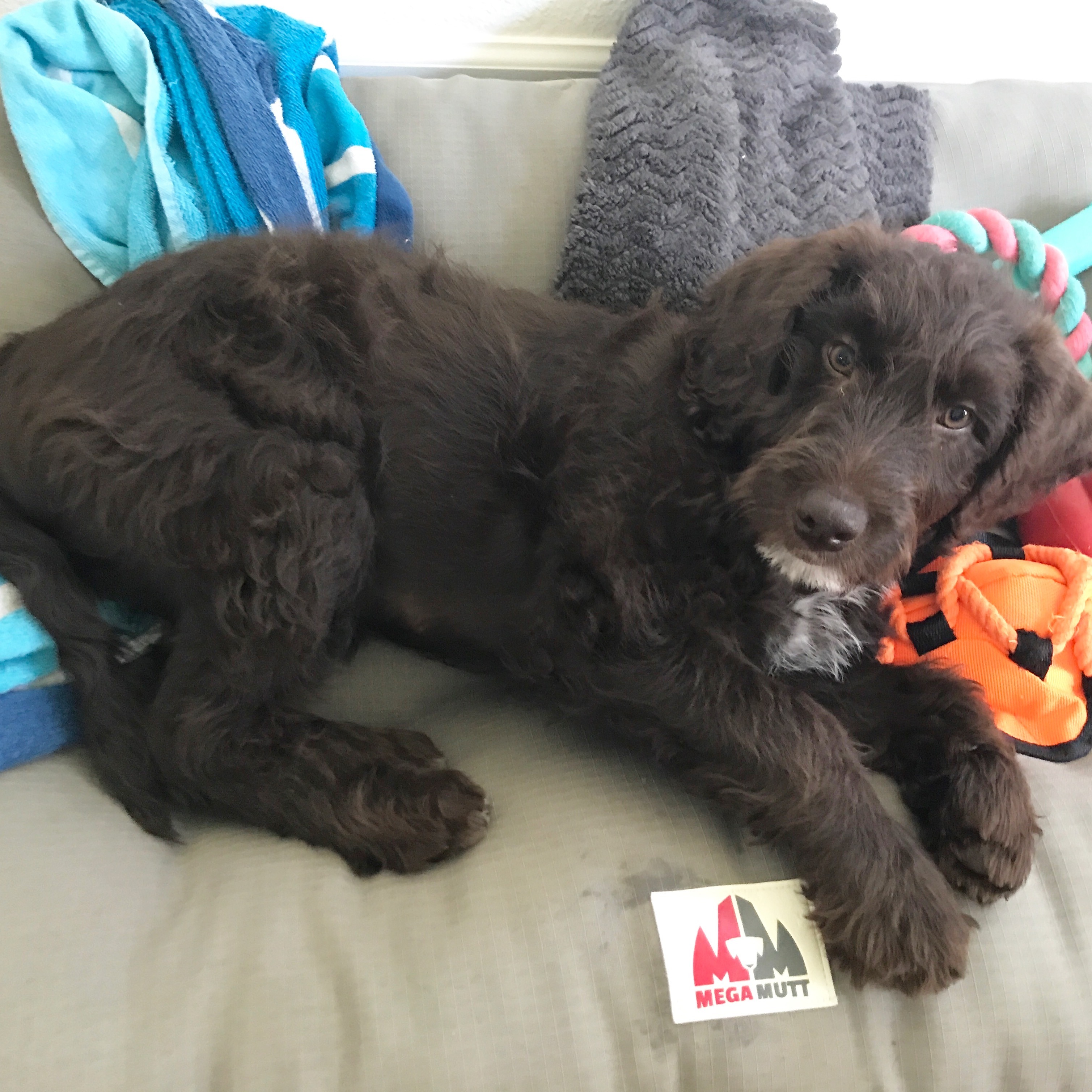 Like children, puppies are expensive (those pesky vet bills!) and require quite a bit of gear. Here are few of the items we (and Arlo) have loved, as well as a couple of additional resources and recommendations.
How to Raise the Perfect Dog, by Cesar Milan: We’ve read quite a few dog books, but this one was the most helpful. You can read my full review here. We haven’t entirely adhered to Cesar’s methods, but this book gave us a great foundation.
Dog Training: After our first few VERY rough weeks with Arlo, we knew we needed to bring in some extra help, so we hired a dog trainer to come to our house. (For local readers, this is the company we used.) I realize this was an indulgence, but it’s one I would highly recommend. Nina was able to see our space and give us specific recommendations for changes we could make. She helped us with general behavior issues and introduced us to specific skills to teach Arlo using clicker training (something I would have had zero clue about how to do on my own). She worked with us for three weekly sessions and got us off to a great start. We plan to do more thorough training sessions when Arlo gets a little older, but the puppy sessions were a huge lifesaver in those early weeks. 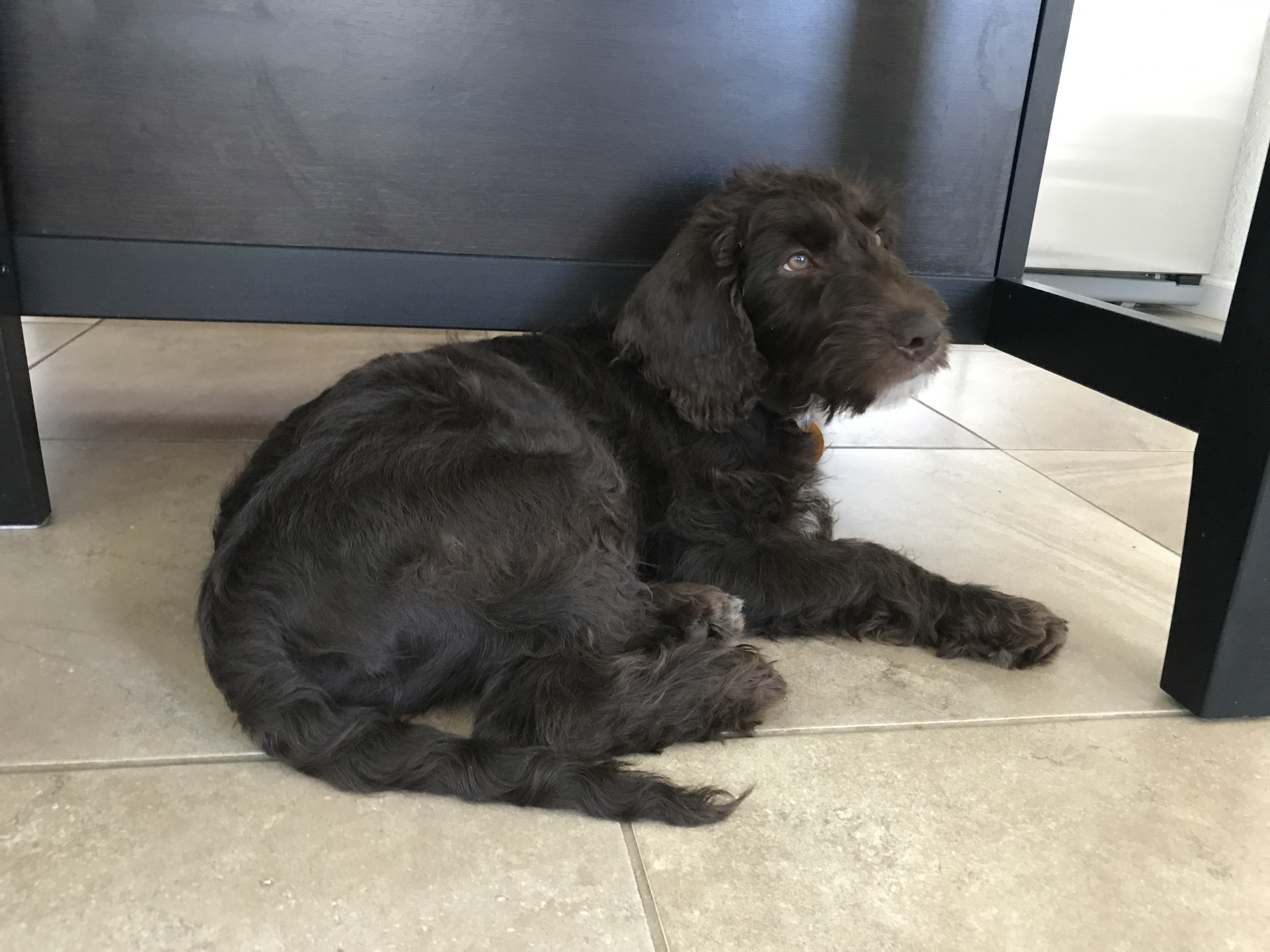 Crate: I was a little reluctant to use a crate, as I didn’t have personal experience with using a crate and it seemed cruel to confine Arlo to a cage. However, crate training is recommended by nearly all dog experts (as well as all of our friends) and I’m glad we decided to get one. Arlo doesn’t love his crate and still barks quite a bit when we first put him in at night, or when we leave the house, but he rarely gives us much difficulty when it’s time to put him in, and after a little barking he generally settles down. The crate has made nights a lot more manageable, and it gives us a place to put Arlo when he’s getting too rowdy with Charleston and needs a time out. The crate we have has an adjustable panel that has allowed us to expand the crate as Arlo has grown.
Pet Playpen: When Arlo’s behavior is getting out of hand, but he’s barking too much to keep in his indoor crate, we move him to this playpen which we’ve set up in our yard. We can’t leave him in our yard unattended since he’s a digger, so this gives us a safe place to keep him outdoors.
Dog Food: We started off feeding Arlo HEB’s Heritage Ranch food because that’s what his breeder had been giving him. We have since transitioned him to Nature’s Domain Puppy, a grain-free food from Costco that was recommended by our trainer. We transfer the bags of food into this container, which we store in our laundry room. When we first got Arlo we were feeding him three times per day, but now feed him in the morning and at night (he doesn’t always finish his food, but we remove the bowl as soon as he shows signs of being done). 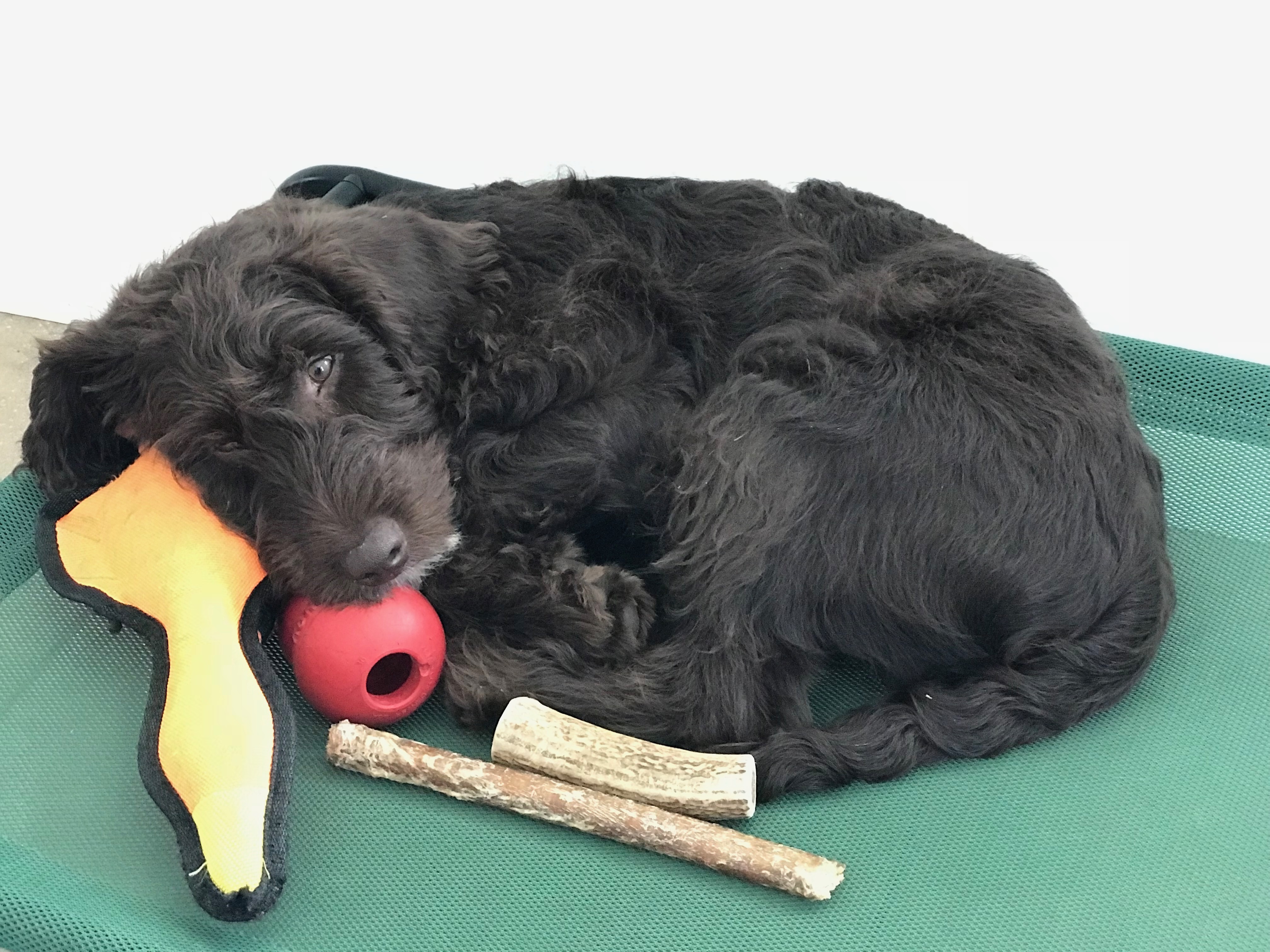 Cadet 12″ Bully Sticks: Arlo is obsessed with his bully sticks and chews on them all day long. I’ve linked to the product on Amazon, but I was able to find them much cheaper at Costco (a 12-pack for under $30).
Ziwi Dog Treats: We use these for our clicker training with Arlo. (We use this clicker.) They’re pricy, but the perfect size and make for a good reward. We keep the treats in this pouch during training.
Elevated Dog Bed: When we brought Arlo home, we had a small soft bed for him in his crate. That was demolished within a week and we haven’t replaced it. However, our trainer recommended this cot and it’s worked out great. Arlo likes hanging out on it (or sometimes sleeping underneath it) and it works well for training—it’s an easily distinguishable “place” to send him to and expect him to stay.
Duck Dog Toy: Arlo has quite a few toys, but this simple nylon duck (picked out by Charleston) is his favorite. It’s held up to endless chewing and tug-of-war and is super easy to clean.
Stain and Odor Remover: We’ve had a lot of house accidents (though thankfully they have become much less frequent). As soon as Arlo has an accident on our floor or in his crate, we spray the area down with this enzyme formula. He’s never peed in the same place twice (other than his crate) so I’m guessing it really does work to remove odors. 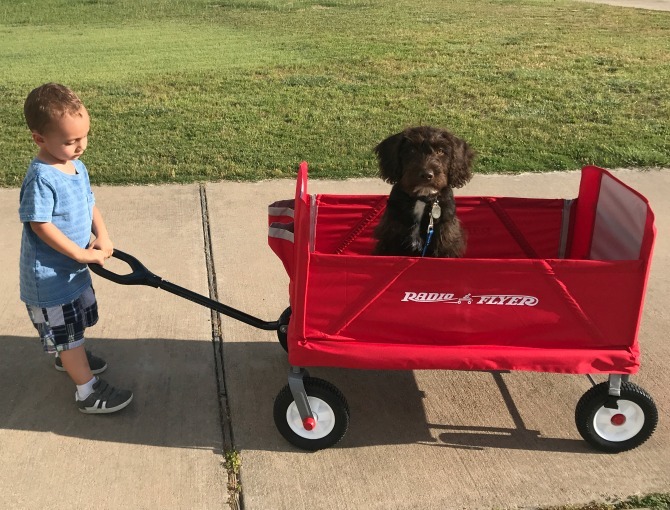 Like I said at the start of this post, it’s been an exhausting couple of months. Life with Arlo has gotten a lot easier, but we still have a long way to go. We would eventually like for him to roam freely in our house, but he still hasn’t moved beyond the kitchen. He also hasn’t gotten to the point where we can leave him unattended unless he’s in his crate. I hadn’t realized the initiation phase would be so long and arduous. However, I’m hoping that a year from now, these days confined to our kitchen will be a distant memory, and that all of our housebreaking and behavior-training efforts will have been proven worthwhile. For now, we are spending lots of time in the kitchen with our puppy who doesn’t like to be more than a foot away from his favorite humans at any given time. (As I write this, he is sitting at my feet—his usual spot.)
Even now, when we’re still in the thick of the puppy stage, I have no regrets about becoming puppy parents. Arlo is adorable and so much fun. He’s playful and affectionate and hilarious to watch. And Charleston ADORES his puppy, which has been the absolute best part of these past two months. Even when Arlo jumps on him and bites him, Charleston wants to smother his puppy with hugs, introduce him to all of his books and toys, and play with him as much as possible. Charleston has gotten pretty good with Arlo’s commands, and I think Arlo listens better to him than he does to Luke or me! It’s so rewarding to see Charleston stepping into his role as Big Brother to Arlo, and he has matured so much through this process. There have been numerous moments when Luke and I have wished we’d gotten a dog before having a child, so that we could have devoted our full attention to his training and care. But we would have missed out on seeing our two kiddos grow up together, and that is proving to be priceless.
I’d love to hear from you: if you are a dog owner, what are some of your best and worst puppy memories? What resources proved essential? If you have any advice you’d be willing to offer, I would definitely appreciate your feedback! 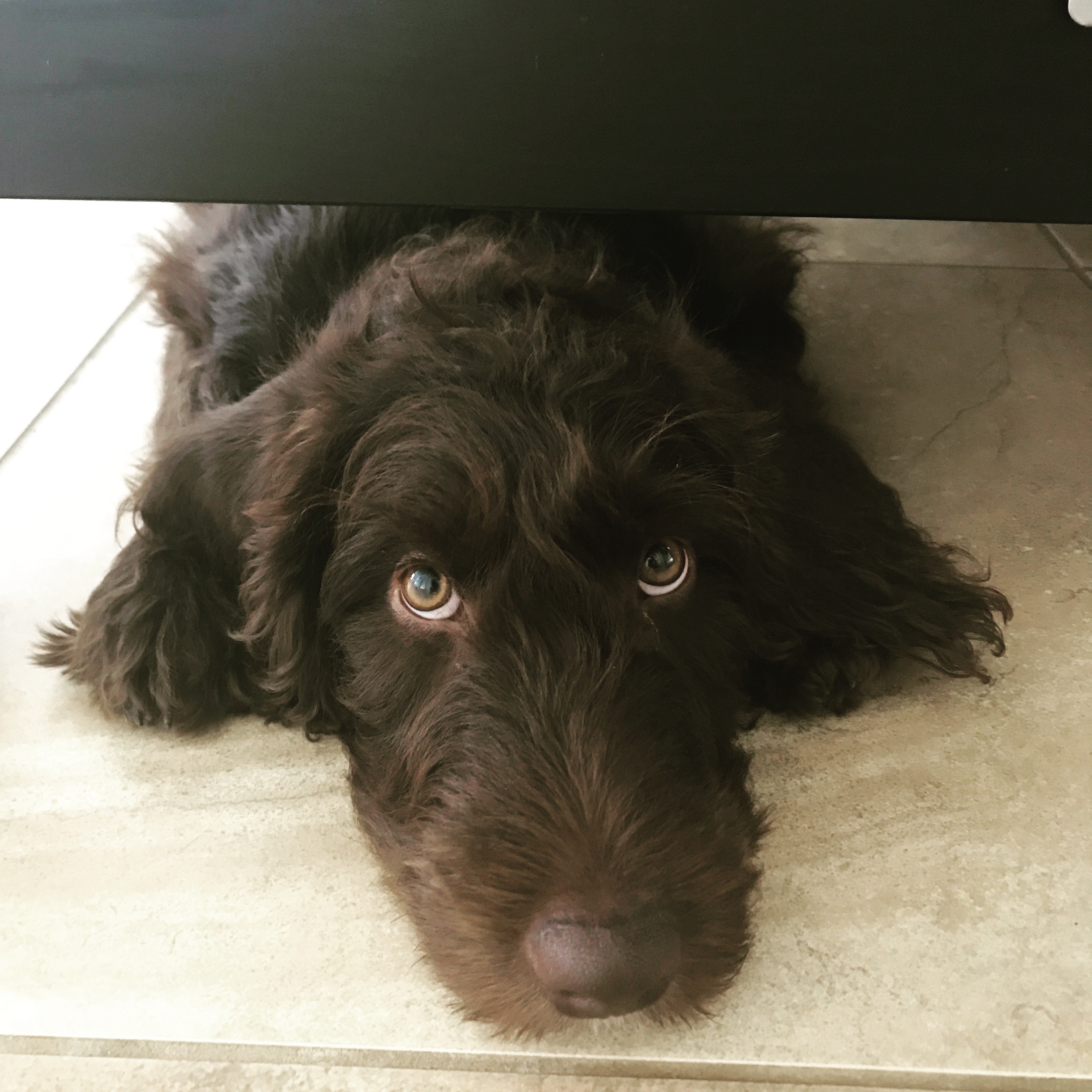 ← Sharing From Our Scars
Quotable // from Benjamin Disraeli →