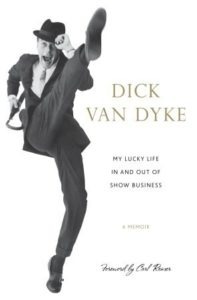 In my mind – and, I’m sure, the minds of countless others who grew up living and breathing all things Disney – Dick Van Dyke will forever be associated with the movie Mary Poppins.  Despite the fact that, since becoming an adult, I have watched every episode of the Dick Van Dyke Show, numerous episodes of Diagnosis Murder, and several of the actor’s other movies, to this day I cannot see a picture of the man or even hear his name without visions of frolicking penguins and acrobatic chimney sweeps flooding my brain.  I don’t mean that in a negative sense; on the contrary, Mary Poppins continues to be one of my all-time favorite movies and, as a result, I consider myself a huge Dick Van Dyke fan.  So I was thrilled when I discovered that the actor had written a memoir.  Even better: there was an audio version of the book recorded by Van Dyke himself!

In My Lucky Life In and Out of Show Business, Van Dyke chronicles his professional and personal life, beginning with his “scandalous” birth (he was conceived out of wedlock).  Van Dyke is quick to note that this is one of the only scandals that he will recount: he will not spend his autobiography spilling Hollywood secrets or bashing other actors.  True to his word, Van Dyke maintains a respectful attitude toward the other celebrities and individuals involved in his narration, an aspect of the memoir that I found quite refreshing.  Van Dyke is much more forthcoming with details of his own life, weaving funny anecdotes and insightful reflections into his conversational narration.  Some of the revelations in this memoir were a bit shocking (this self-proclaimed family man left his wife for another woman!), others were surprising (Van Dyke actually paid Walt Disney to play the role of Mr. Dawes Senior in Mary Poppins), and still others were truly heartwarming (he considers his children and grandchildren his greatest work).  Perhaps my favorite anecdote of the book was Van Dyke’s admission to having a crush on Mary Tyler Moore; nothing ever happened between them, but as he puts it, who didn’t love Mary?

There is always some risk involved when reading the biography of a beloved figure: what if everything you thought you knew about that person was a lie?  What if, after learning about the individual’s personal life, you can no longer admire or even tolerate the subject of the book?  Fortunately, this was not the case for me with Dick Van Dyke.  After listening to the beloved actor share his story, I am a bigger fan than ever!  Not that Van Dyke is perfect.  But he is open and honest about his mistakes and flaws, and I came away admiring him even more for them.  Combined with what I already knew about the actor, this memoir left me with a sense that Van Dyke is a genuinely thoughtful, good-hearted man and I can be proud to consider myself a fan.