As of today, we are officially two weeks into the year 2014.  Which means that it has been two weeks since countless individuals committed to New Year’s goals and resolutions that they hope will transform their lives over the next twelve months.  For many, it has been two weeks of fastidiously adhering to these resolutions as they run and read and diet themselves toward self-improvement. Others have likely found themselves slipping up just a bit, and some may have already given up on their goals altogether.  And then there those for whom the whole issue of resolutions is completely irrelevant because they never made any resolutions to begin with.

This year, I found myself in that third camp: resolution-less, and happy to be that way.  New Year’s resolutions have never really worked for me – and not for a lack of trying.  For most of my life, I have begun each new year with optimism and purposefulness, determined to adhere to every resolution on my long list of things I felt needed to be transformed in my life.  I set a high standard for myself, and would settle for nothing short of perfection.  And then, inevitably, I would fail: my goals would prove too daunting to perform to my unrealistic standards, so I would scrap them altogether and wait for another year to come around so I could try again.

After years of suffering through this soul-squelching cycle, 2014 was the year I decided I would elude failure by simply avoiding resolutions altogether.  Sure, I did outline some “light” goals for myself, but these were mostly along the lines of maintaining my personal status quo – every item on my list was simply something that I wanted to continue doing.  I figured that aiming low was the only way of guaranteeing my personal success and, consequently, my peace of mind. 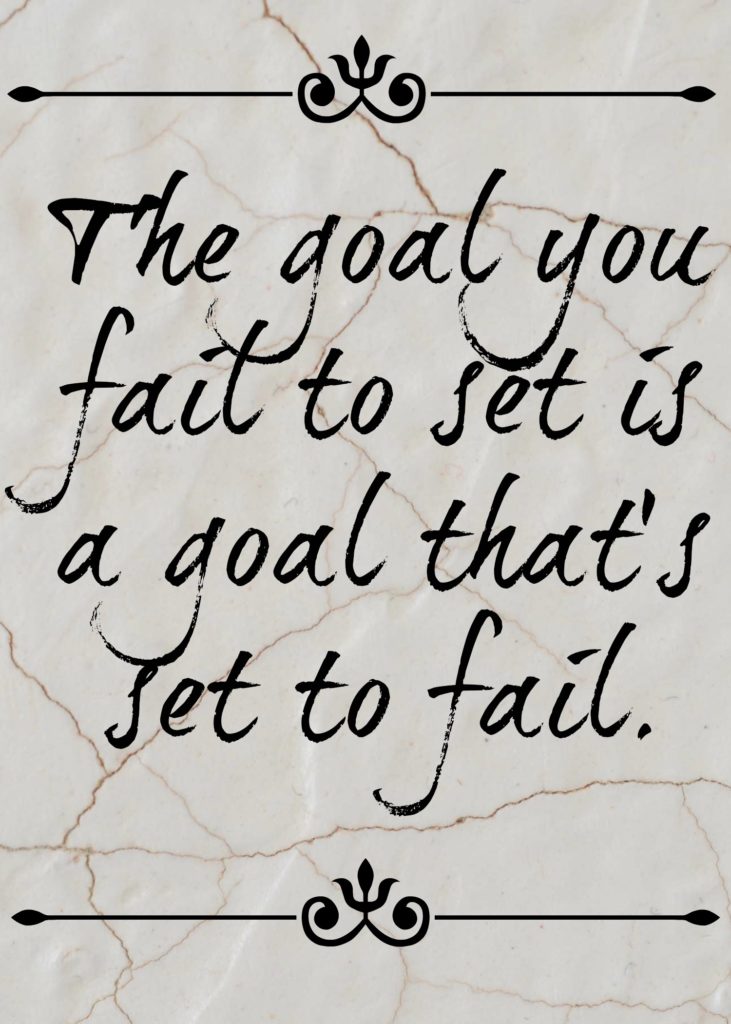 And then I heard something that caused me to question my new-found beliefs regarding goals.  I was listening to a Michael Hyatt podcast on goal-setting (podcast #078, if you are interested in hearing to the whole thing; it’s a worthwhile listen!).  In this particular episode, Michael was answering listeners’ questions about setting and keeping goals, and one of the questions really hit home: “How do you regroup and get motivated to achieve a goal that you missed previously?” Michael acknowledged that every time you set out to accomplish a goal, there is a risk involved that you will not succeed. However, failure to achieve a goal does not mean that you are a failure, and though it should inform your future goal planning, it should not keep you from striving to achieve something you find meaningful.  Michael pointed out that people who are high achievers frequently miss goals; Michael even noted that in 2013, he himself only hit about half of the goals he had set for himself at the start of the year – BUT, if he had not set those goals, he wouldn’t have accomplished ANY of them.

Ultimately, goal-setting is about much more than achieving a specific outcome: the value in setting goals is that it stretches us to accomplish more than we would have accomplished had we not set them.  Goal setting shouldn’t be safe; instead, our goals should take us outside of our comfort zone, which is where growth, happiness, and fulfillment reside.

Michael’s words have me rethinking my abandonment of New Year’s Resolutions.  In playing it safe with my goals this year, my intention had been to avoid failure, but ultimately, this self-preservation technique served only to keep me firmly within my comfort zone.  I might have eliminated my risk of failure, but in doing so, I sabotaged my opportunities for growth. Perhaps it’s time for me to set some truly risky goals.  I will likely fail at some of them (or perhaps even all of them), but I am willing to experience a few setbacks on my journey toward personal development.  2014 might be the year that I fail, but it won’t be the year that I simply didn’t try.