Wouldn’t it be wonderful if there was a magic bullet of health – one small change that you could make to your diet or lifestyle that would solve all of your metabolic, psychological, and digestive woes?  According to cardiologist and author William Davis, the elimination of wheat is that magic bullet.  In his bestselling book Wheat Belly, Davis takes a strong stance against this ubiquitous ingredient and outlines the miraculous health benefits that he insists can be achieved through simply avoiding wheat. With such a lofty premise, it’s no wonder that this book has garnered so much attention.

When Wheat Belly was first released in 2011, I immediately disregarded it, simply because I do not fall within Davis’ target audience: I do not need to lose any weight, and since being diagnosed with Celiac Disease two years ago, I already follow a wheat-free diet.  I continued to hear more and more people citing this book, though, so eventually I decided to read it myself to see what all the fuss was about. 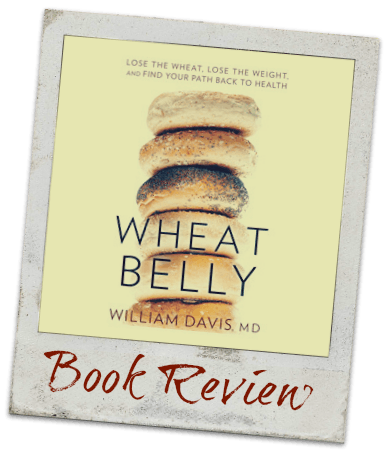 Wheat Belly begins with a history of modern wheat and how it is not the same as that which was eaten by our ancestors, or even by our grandparents.  Davis goes on to outline the impact of modern wheat on our bodies, with each chapter addressing a different health concern and explaining how wheat elimination is the panacea for each of these woes.  In the final section of the book, Davis elaborates on his prescribed diet and gives tips for leading a wheat-free lifestyle.

Prior to reading Wheat Belly, I was skeptical of its broad claims and sweeping generalizations; after reading it, I am shocked that so many Americans are buying in to what Davis has to say. Davis’ writing is not only repetitive and hyperbolic, it is also incredibly demeaning towards overweight Americans.  Such insults are particularly hard to swallow given the fact that Davis is a cardiologist, not a registered dietitian.  I would be willing to overlook Davis’ tactlessness and lack of qualification if his content was sound, but it, too, is deeply flawed.  Davis maintains that his assertions are backed by science, but most of his examples are purely anecdotal, derived from his experiences with his cardiovascular patients.  When Davis does cite specific studies, they are often misinterpreted or taken out of context.

Not being a dietitian myself, I realize that I am in no way qualified to analyze Davis’ claims; but much of what I was reading in Wheat Belly seemed off to me, so I did a bit of online research.  I found that, while Davis does have his supporters, a majority of the experts within the dietetic (and even the glueten-free) community find Davis’ claims to be overinflated, if not completely unfounded.  One of these experts is Dr. Julie Jones, a licensed nutritionist and professor of nutrition at St. Catherine University.  In her thorough review of Wheat Belly, Jones uses scientific literature to analyze – and mostly discredit – each of Davis’ points.  Her analysis is long, but I found it to be a very helpful companion piece to Davis’ diatribe against wheat.

Perhaps the most disillusioning aspect of Wheat Belly is the diet outlined in the last section of the book.  After spending nearly 200 pages insisting that simply eschewing wheat is all one needs to do to achieve superior health, Davis prescribes a diet that eliminates or severely limits not only wheat, but also corn, rice, potatoes, legumes, dairy, soy, fruit, all other grains, and all snack foods and desserts. If wheat is really the single culprit behind our society’s weight and health problems, why should any of these foods be off limits?  Apparently, to reach Davis’ high standards, one must live a life that is not only wheat-free, but practically food-free!

While Wheat Belly offers ample opportunity for criticism, I am not sorry I read it.  Amid the shoddy science and repetitive rants were some definite points of interest: I found the chapter on Celiac disease to be particularly informative, as was the section on hidden sources of wheat and gluten.   It was also enlightening to read a book that is informing many people’s opinions about food in general, and wheat in particular. And despite having spent this entire post discrediting Davis, I must admit that I am not in total disagreement with his premise.  The obesity epidemic in America is an indisputable fact, and due to wheat’s ubiquitousness in the American diet, it has undoubtedly played a role in the overall decline in our health.  And yet, although I cannot eat wheat myself, I believe that for most people, moderation – with wheat, and with all food – is the true key to health and weight management.  The solutions offered in Wheat Belly might seem enticing, but ultimately, this book presents more problems than solutions.