Fifteen Things I Learned in August {2017}

August was a good month for me. It was also a tremendously challenging month. These past four weeks have been a time of emotional and spiritual refinement: I’ve peeled away layers of protective covering and begun the painful process of growing a new, healthier skin. I’ve stared down many of my fears, bending beneath the pressure of some, while conquering others. I’ve spent time reflecting on my personal values and truths, and come away with more questions than answers. I’ve shed tears of agony, but also experienced levels of peace and joy that have been absent from my life for far too long.

I don’t have many details to share, at least not right now. I recently heard a Brené Brown podcast interview in which she discussed the importance of not oversharing our stories before they have done their work in us and we are ready to present them to the world. There are times when writing and sharing my story are part of the healing process for me, but this isn’t one of them. My period of catharsis is not yet complete, and I suspect it will be some time before I’m ready to write candidly about this journey that I am on. So, while August has been an incredible month of personal learning and growth, this list contains just a few glimpses into my inner journey, along with plenty of lighter fare—because even the heavier months involve lots of fun trivia! 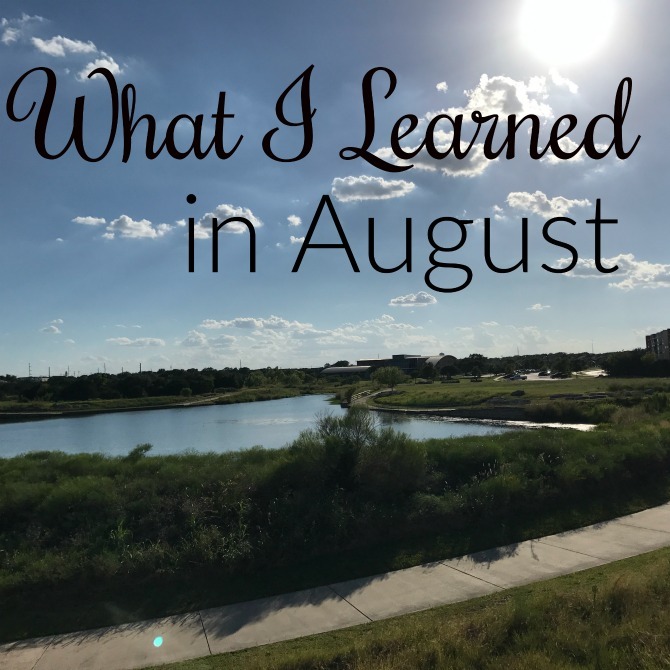 I heard this term on a podcast and it immediately resonated. The top definition on Urban Dictionary describes it as “you’re enjoying what you’re doing in the here and now and not on social media broadcasting or seeing what everybody else is doing.” I feel like this is hard to attain in today’s culture, but I’ve found that the amount of time I spend on social media is inversely proportionate to how happy I am with my own life.

Another form of JOMO: the feelings of excitement I experience when social plans are unexpectedly canceled. Please tell me I’m not the only one who secretly loves when this happens!

I’ve been gradually increasing my podcast speed in order to get through my ever-growing queue, and I’ve worked my way up to double speed. The only problem with this is that whenever I end up listening to somebody talk on regular speed (on the radio or even in real life), they sound a bit. . . dull.

3. Jane Austen is on the Bank of England £10 note (which is called a tenner).

As an Austen fan, I find this amazing and am a bit jealous of the Brits and their fancy new money; but apparently many Austen loyalists are up in arms about the new note because the Pride and Prejudice quote (“I declare after all there is no enjoyment like reading!”) is spoken by an unlikable character (Caroline Bingley, who says the line just to impress Mr. Darcy). Despite the source of the quote, I think it’s a pretty good one and wouldn’t mind having a Jane Austen tenner of my own hanging up on my wall. 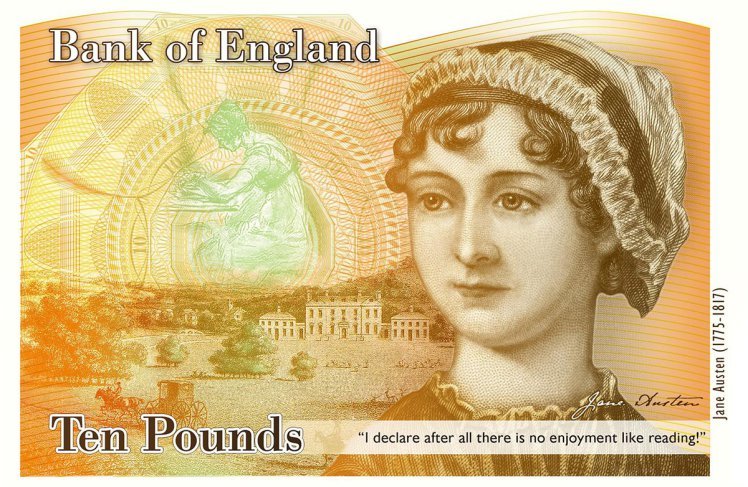 This article about a woman whose DNA results prompted her to dig deeper into her family’s history—resulting in a shocking revelation about her father—absolutely blew my mind. I’m intrigued by the concept of these tests, but had never thought about the ethical and legal ramifications to the answers they might provide. It seems to be yet another instance in which scientific developments are outpacing society’s ability to handle the repercussions (and are even aware of what those might be).

5. Returning to therapy was definitely the right decision.

I dedicated a whole post to this last week, but I would be remiss not to include this item on August’s WIL list because it was truly my biggest takeaway of the month. Having someone—a professional—to help me process the inner workings of my emotions and my brain has been hugely beneficial. My therapist has been helping me identify which of my hangups are truly unhealthy (and in need of some work), and which are simply part of being human. My only regret is that I didn’t start seeing someone sooner.

This is another of August’s Aha! moments that I’ve already written about. Learning that being a slow processor is totally normal for an introvert has allowed me to embrace this aspect of myself and stop trying to circumvent the journey. It’s also prompted me to create space in my life for that processing to occur.

Prior to our move we had settled into a good routine of eating dinner together as a family, but somehow Luke and I lapsed back into the habit of feeding Charleston earlier, then waiting to eat dinner ourselves until after he was in bed. This was no longer working for our family for a number of reasons, but I was reluctant to make a change: mealtime with a toddler isn’t exactly a relaxing experience and I really enjoyed eating my dinner in peace—even if that meant we weren’t eating until 10:00 at night. We’ve officially made the shift, though, and we are all thriving with the new routine. My original plan was to head to bed earlier since our evenings had shifted up. That hasn’t happened, though, because I’ve discovered that. . . .

8. The 9 o’clock hour is my most productive writing time.

Luke gets up WAY too early, so he has been going to bed at the same time as Charleston. That leaves me with a few extra hours of quiet before my personal bedtime, and I have found that this is the best time of day for me to write. In the past I would try to squeeze writing time into whatever spare hours I found during the day, and it often detracted from playtime with my son. Lately I’ve been waiting to blog until my boys are in bed, and I really like the new routine. I’m a night owl by nature, so it’s no surprise that the words flow more freely for me at night, and it doesn’t hurt that I’m not trying to blog with a toddler who wants to “help.”

9. Eight of the American presidents have been left-handed.

10. The hashtag is only ten years old.

A technology evangelist named Chris Messina proposed the use of the hashtag on August 23, 2007, with the tweet, “How do you feel about using # (pound) for groups. As in #barcamp [msg]?” Today, the most commonly used hashtags on Instagram are #love, #instagood, #me, #cute, and #tbt.

11. Our Myers-Briggs personalities impact our relationship with food.

As a personality junkie I spend more than the usual amount of time pondering the ways in which our personalities factor into our lives, but it had never occurred to me that our personality types could dictate the way we feel about food. This article about the Myers-Briggs/food correlations pegged my own food experience as an INFJ. I was amazed to learn (but suppose I should have expected) that INFJs are the most common type to have an eating disorder. In one study, they comprised 18.5% of patients with eating disorders; this is especially shocking given that INFJ is the rarest of the sixteen types (1.5% of the general population).

12. The eclipse was pretty anticlimactic.

I realize this statement is pretty controversial since it seems like the entire nation is still basking in the greatness that was the eclipse. Maybe it’s because Austin wasn’t along the path of totality? We weren’t able to find eclipse glasses, but Luke made a box projector so we could witness the event without going blind. Even with the box, I wasn’t all that impressed. On the plus side, the fact that it was essentially a nonevent kept me from feeling any guilt about not waking Charleston from his nap to see it. 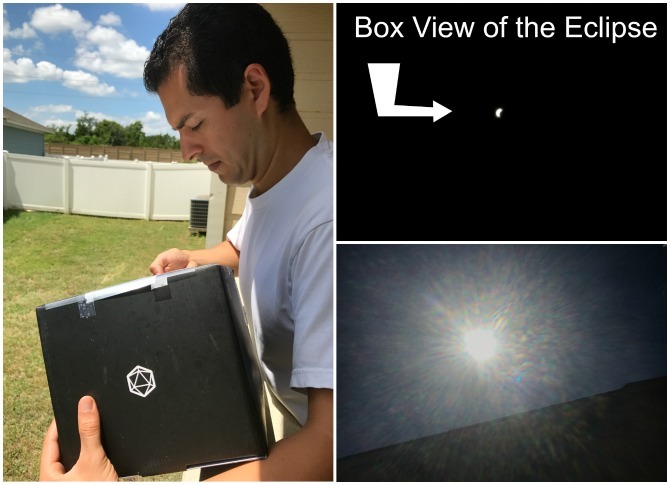 13. Reading a good page-turner is an instant mood-improver.

For the first two decades of my reading life, I read mysteries and thrillers almost exclusively. Over the past few years my reading tastebuds have expanded, and these days I read very few true page-turners. However, in a month that was emotionally heavy for me, I found myself in need of an escape, and spellbinding fiction fit the bill. Diving into a riveting story not only diverted my attention for the periods when I was reading, but left me feeling refreshed for hours afterward, and I was reminded of why this genre was my first literary love.

14. Witzelsucht is a clinical term for an addiction to making bad jokes.

15. August is a big month of personal anniversaries.

I’m a sentimental soul and enjoy recognizing personal milestones and important dates; I somehow hadn’t realized until this year how many of those fall in August. August 9 is the anniversary of getting my driver’s license (17 years ago this year) and the day Luke proposed (9 years!); I love that it also happens to be National Handholding Day. On August 28 I celebrated the day I was baptized (23 years ago). August is also the month when I recognize my “recovery birthday” (when I went to treatment for my eating disorder six years ago). And August is this blog’s birthday month: KendraNicole.net is officially four years old!

I’m linking up with Emily P. Freeman to share what we’ve been learning lately. I’d love to hear about a thing or two you learned this month!