Our summer is off to a fun and very busy start. Amidst all the activity, I haven’t had much time to step back and process all that has been going on around me and within. However, I’ve learned over the years that, for the sake of my mental and emotional well-being, it’s in the busiest times when it becomes particularly essential for me to pause and reflect.

For me, part of that soul-saving reflection involves looking back over what I’ve been learning. I’m thankful for this space, which holds me accountable to doing just that—even if it’s just once per month. Here’s a look at a few of the things I learned in June. 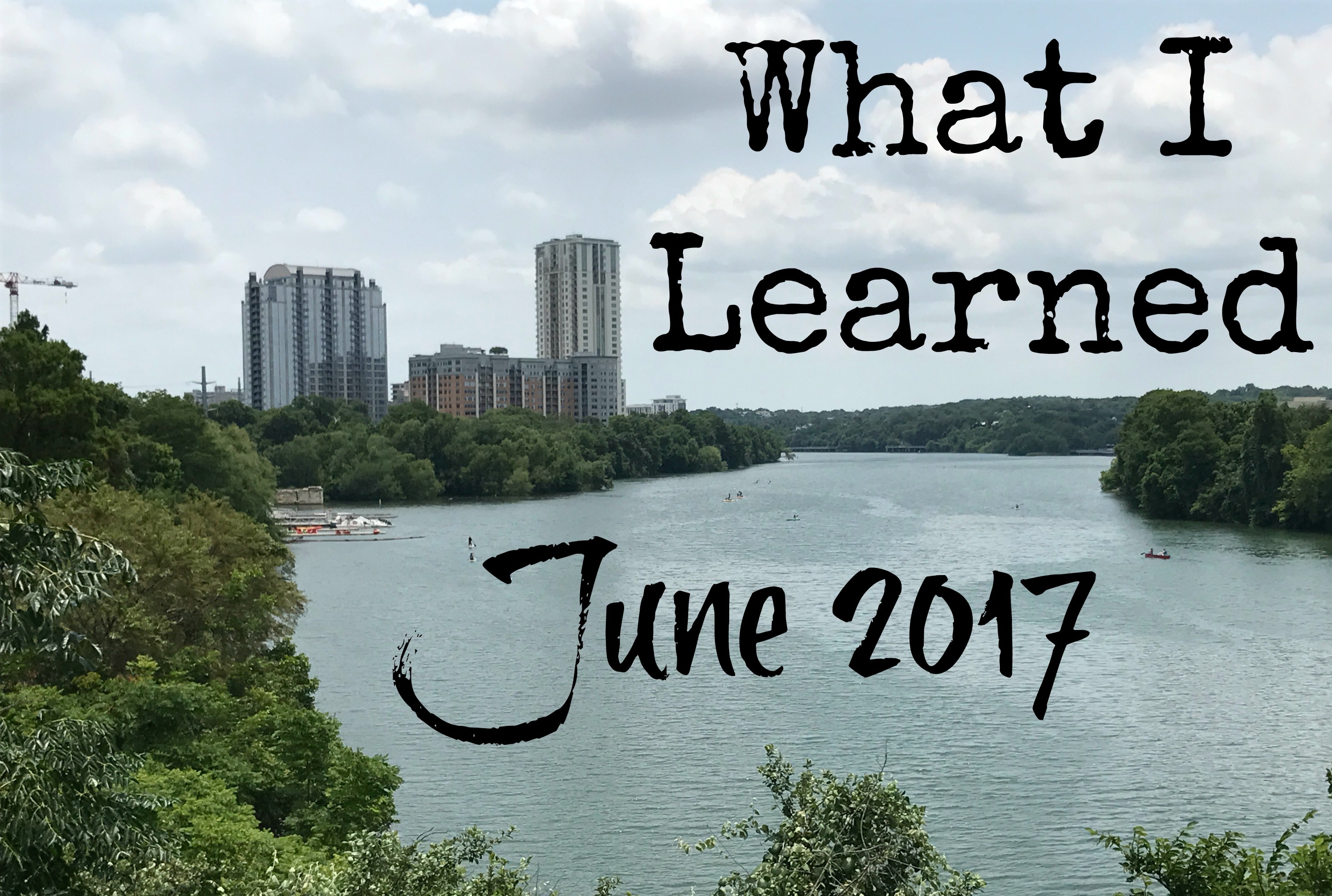 An odd quirk about me (that I think I’ve shared before) is that I wear very little makeup, but I love mascara and almost never leave the house without my lashes done up. I enjoy testing out a new brand of mascara every couple of months, and this month I decided to splurge on a new-to-me brand I’d been hearing a lot about. At $30, it cost quite a bit more than I generally spend on mascara. And though I like it a lot, I haven’t noticed much of a difference from my usual $5 drugstore brands—at least not enough of a difference to justify the cost. It was fun to try something new, but next time I’ll be going back to the cheaper mascara that does the trick at a fraction of the price.

Since moving to Texas, my very favorite restaurant has been Verts Mediterranean Grill. We were still in the process of unpacking boxes when I picked up my first falafel salad from our neighborhood location, and it was love at first bite. After that I found myself eating at Verts almost every time we went out (I would grab Verts and meet Luke and Charleston at a nearby restaurant of their choice, either Pieology, Chipotle, or In-N-Out—all of which are in the same center, a few blocks from our house). Even on days when we didn’t go out to eat, I would frequently stop in at Verts to grab a side of falafel or sweet potato fries to have with dinner at home. I enjoyed the food, but I also came to know the employees and considered them friends. I was there so often, they almost always gave me my food for free!

Well, I’m speaking of this in past tense because two weeks ago, my beloved restaurant closed, out of the blue! It was open one day, and the next day there was a sign on the door saying that they were “relocating”, though a quick online search informed me that this wasn’t a relocation, but a true closing, and that Verts is closing most of its Texas stores (supposedly to give more attention to their stores in other states?). As silly as it may seem, I’ve been going through a mild grieving process over the abrupt loss of my favorite restaurant. I will miss the food, the people, and the convenience of having a comfort restaurant so close by. There are a few other locations within a half-hour drive from us, but it definitely won’t be the same. A silver lining is that the foods I ate from Verts probably weren’t the best choices for my diet (I really don’t need to be eating fried food every day!). That one bright point does little to soften the blow, and the experience has been a big lesson in not taking things for granted.

My parents just returned from a two-week Russian River cruise, and the pictures they sent from their journey were positively breathtaking. I visited St. Petersburg with my family before getting married, and I remember finding the city fascinating, but we didn’t get to explore the countryside at the time. Now, seeing my parents’ pictures and hearing of their great experience, I’m dying to go back. 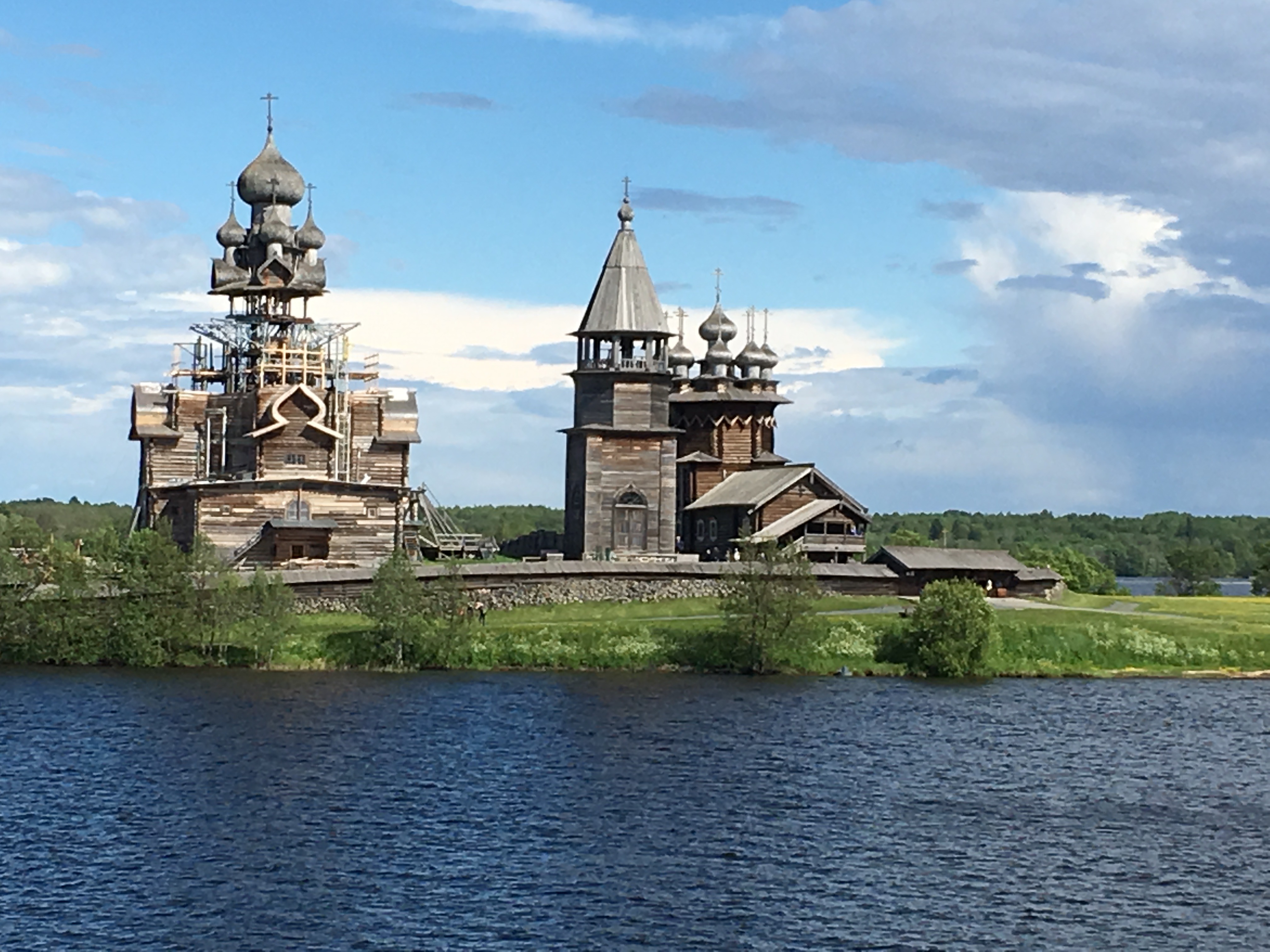 I learned many interesting TED facts from this book (review to come!), but the most basic—and one I probably should have known—was the meaning of the name. I’d always assumed the conference was named for some guy name Ted and I’m a little disappointed that no such man exists. Do you watch many TED talks? My latest favorite is this recent one from Tim Ferriss on achieving success and overcoming depression by defining fears.

5. Double check the address before blindly following a Maps app!

Last week I was heading to an Essential Oils party and made the rookie mistake of simply clicking the linked address in the Facebook invite and driving off. Nearly an hour later, the app said I’d arrived—which I somehow doubted, because I was in the middle of NOWHERE! Thankfully I still had cell reception and was able to put the address into another app that got me to the party (which was actually being held just fifteen minutes from my house). I was late, but I made it! And never again will I blindly follow an address without checking my source.

6. A peck is equivalent to two gallons. Four pecks make a bushel.

I was familiar with the terms “bushel” and “peck” thanks to this song but I’d never stopped to think about what those words meant until I found the conversions listed on the inside cover of my vintage Betty Crocker cookbook. The book was a wedding gift from my mom, who used an earlier copy to teach herself to cook! I rarely cook from it because the recipes are pretty old-fashioned, but it’s still one of my favorite cookbooks because flipping through it is a journey back in time. I had fun poring over it this month in search of some old/new recipe inspiration. (I need to find some new foods to cook now that I’m no longer relying on Verts for a bulk of my meals! 😉 ) Of course it was fun to learn something new in the process. 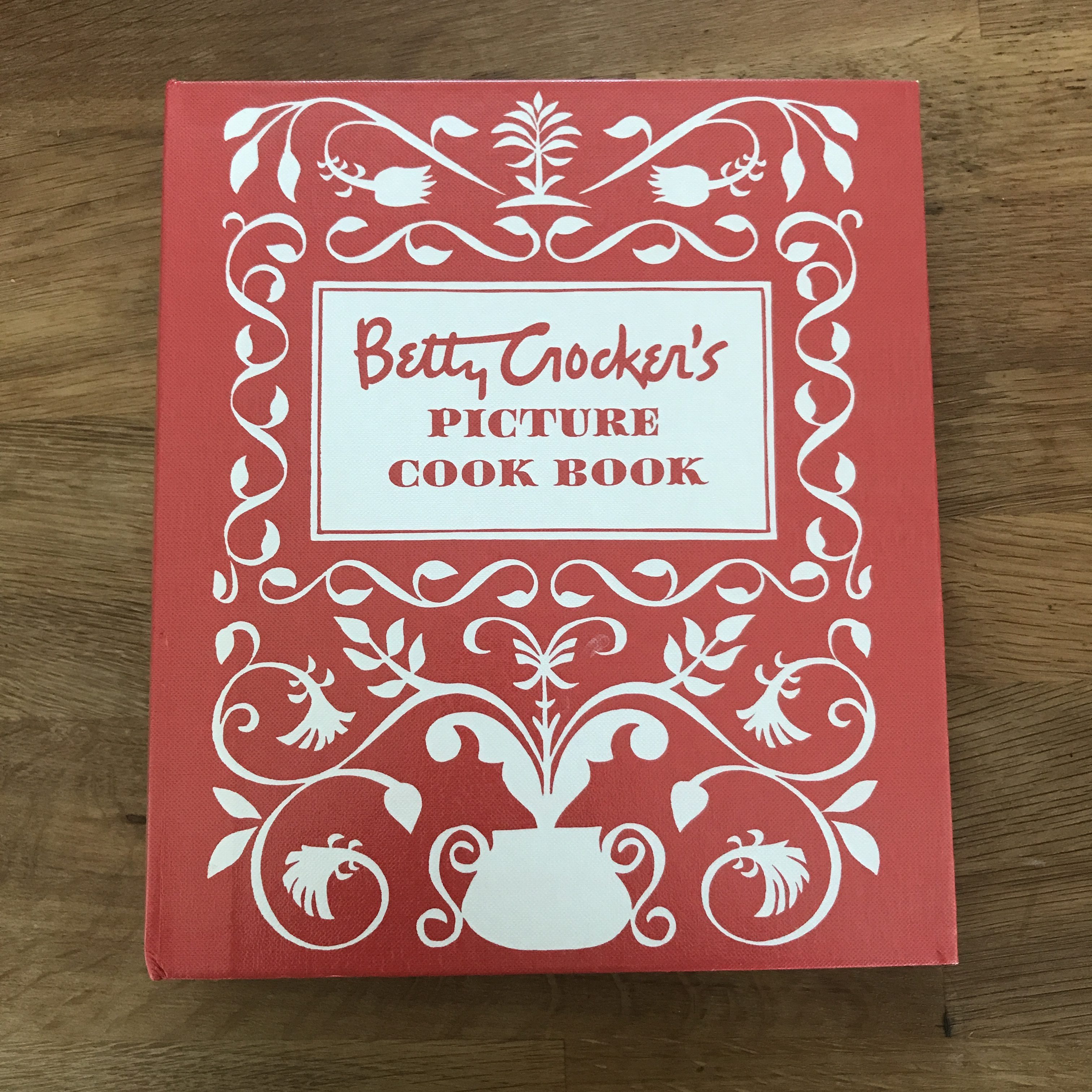 7. Reading amnesia is a thing.

I frequently will look back at a title I’ve marked as read on Goodreads and realize I remember nothing of the characters or even the storyline. It was reassuring to read this article that let me know I’m not alone. Apparently, reading amnesia is fairly common. Unfortunately the article doesn’t offer any suggestions for preventing this phenomenon.

8. The “do it like a big boy” card works really well (sometimes).

I’m often able to convince Charleston to behave a certain way or do something new (like sit on the potty) by telling him it’s what big boys do or even showing him pictures of his older friends as an example. Unfortunately this tactic isn’t working with weaning from breastfeeding. We’ve made little progress on that front, so my latest approach has been trying to reason with him, telling him that “only babies have milkies, not big boys.” Charleston seems on board during our conversations, but once he gets tired he will start tugging on my shirt and tell me “I so sorry Mama. I just want some milkies! I want to be a baby.” Whelp, I guess we need to try a new direction.

While visiting the Lady Bird Johnson Wildflower Center a few weeks ago, it occurred to me that Lady Bird might not be her given name. A Wikipedia search told me that she was christened Claudia Alta; when she was a baby, her nursemaid said she was “purty as a ladybird” and the name stuck. The funniest part to the story is that “ladybird” was the common term for a ladybug at the time. 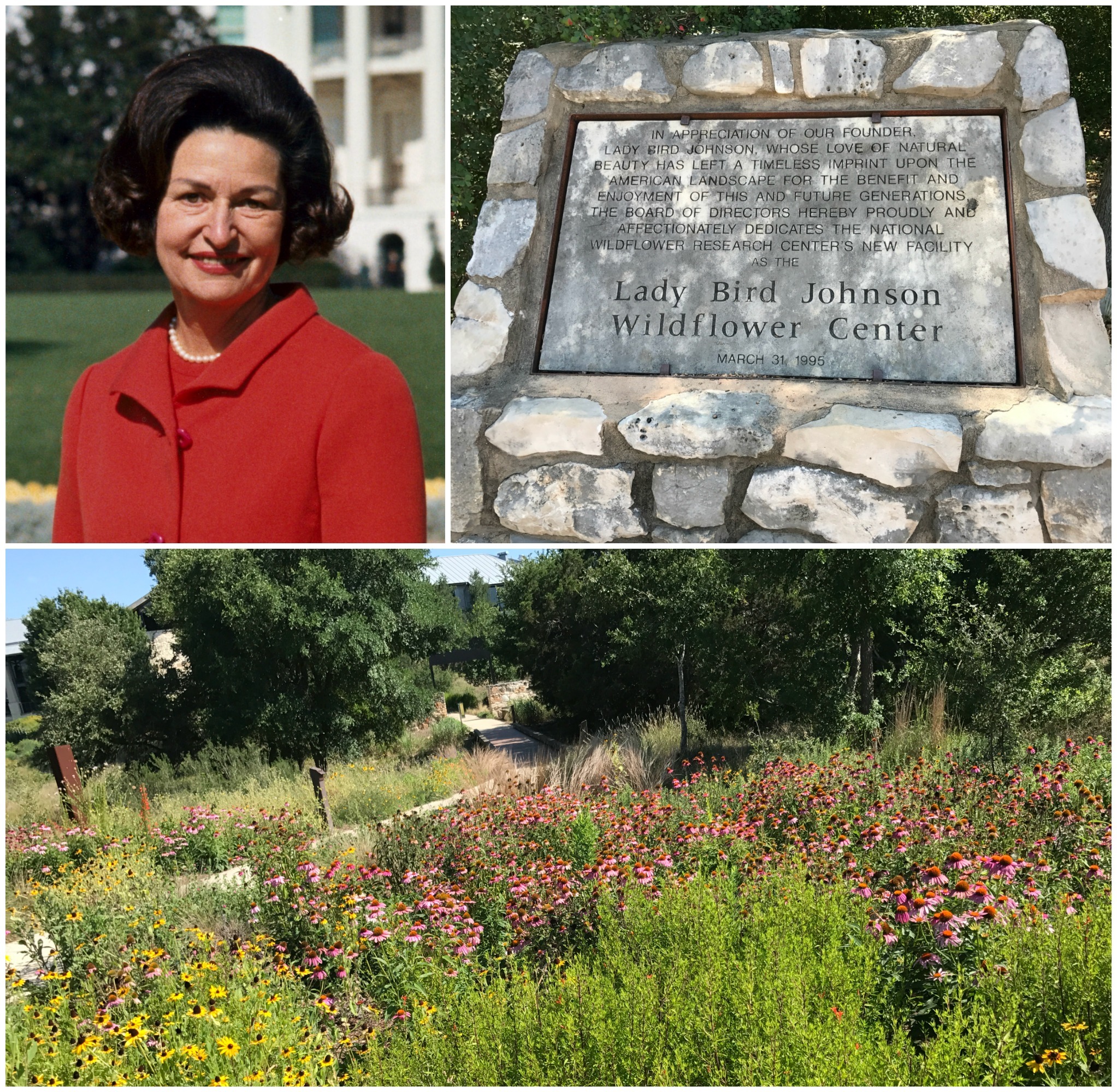 10. Kids make it easier to make friends, but harder to connect with them.

Having Charleston with me when I’m out and about makes it so easy for me to connect with others, especially other moms—we automatically have something to talk about. However, as he gets older I am finding how much harder it is to pursue these friendships when he is around. Phone calls are nearly impossible, and in-person interactions aren’t much easier. I’m thankful that my friends are moms themselves (and are in the same situation) or, if they’re not moms, are still very understanding. We’ll savor those rare moments when we can hang out without our kids, and in between, we’ll rely on texts to stay connected . . . all the while remembering that this is just a stage in life and one day we’ll miss the time when our conversations were peppered with interruptions from squealing toddlers.

11. Planes are not certified to take off at temperatures over 118 degrees.

Luke’s brother is a pilot based in Arizona, so he has been affected by the recent heat wave. I’m pretty impervious to hot weather and forget that it can be dangerous and must be taken seriously.

Is that not just the most amazing fact? In an interview about his mom and the sweaters, Mister Rogers said, “I guess that’s the best thing about things. They remind you of people.” What a perfectly Mister Rogers thing to say. I loved seeing the color chart documenting the sweaters he wore during his time on the air. I wonder if the shifts in color over the years reflect popular colors of the time, his mom’s personal preferences, or something else entirely? 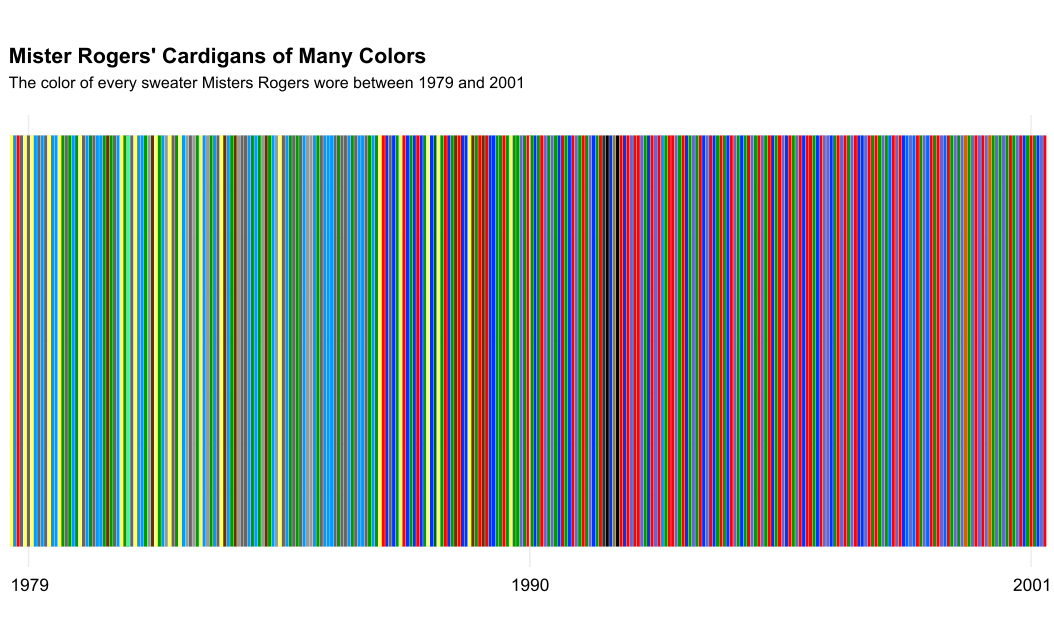 I’d never heard of this holiday until this year, but apparently it’s an American holiday that commemorates the June 19, 1865, announcement of the abolition of slavery in Texas and the emancipation of slaves throughout the former Confederacy. Texas was the first state to establish Juneteenth as a holiday in 1980, and since then nearly all of the states have recognized Juneteenth as either a state holiday or a ceremonial holiday.

14. God loves me—and He’s willing to use some unexpected channels to make sure that I know it!

I wrote all about this in Monday’s post, so I don’t have much more to say—other than that it’s the biggest thing I’ve learned all month, and possibly all year.

This summer, my Bible Study group has committed to reading a book together and meeting once per month to discuss. Although there are more than a dozen girls in the group, only four of us were able to make it to June’s meet-up. At first I was disappointed that so few from our group were able to come, but the four of us who showed had a fantastic evening. God was able to speak to me through each of the other gals there, and we were able to have a more intimate and personal discussion than would have been possible with a bigger group. And we had no shortage of things to talk about—we were still chatting away when the kind Panera employee informed us that the restaurant was closed. God definitely knew what He was doing when he brought the four of us together that night. And we were pretty proud of ourselves for remembering to capture the moment with a picture at the end. 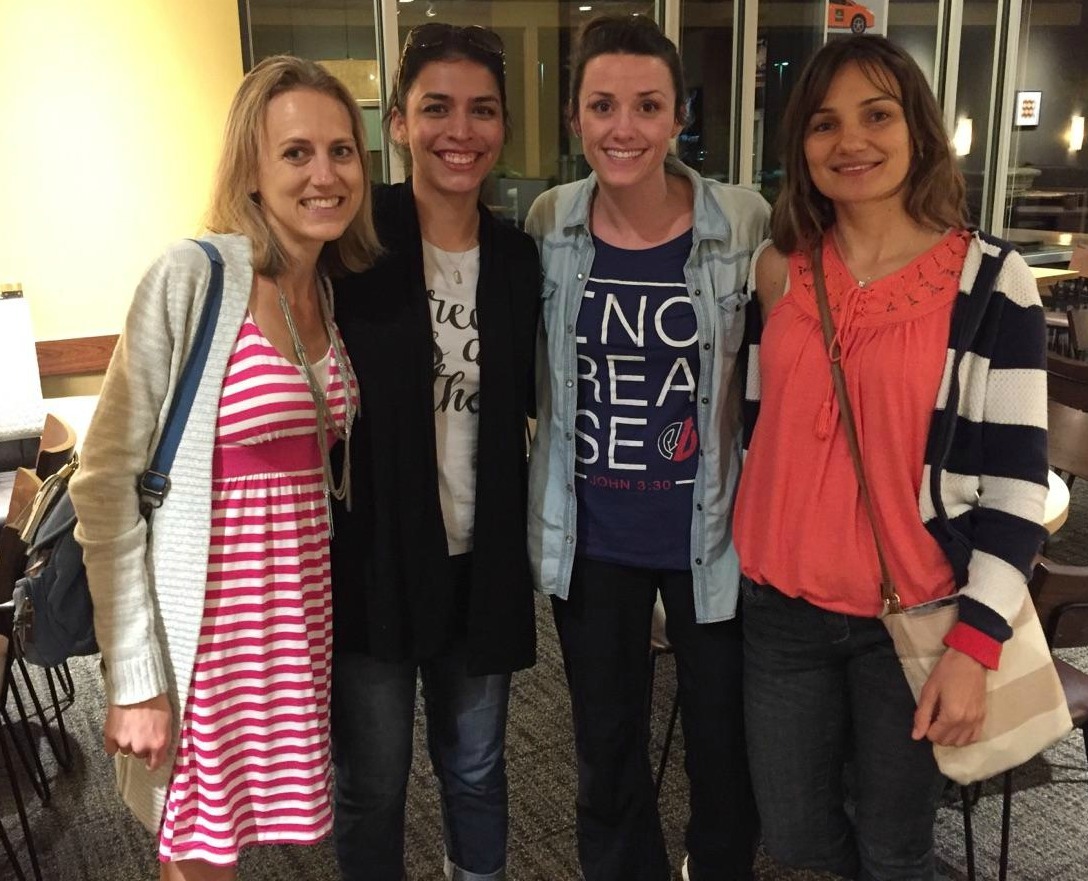 What are a few things you learned in June? Please share one thing with me!