I’ll save you my usual spiel about how I can hardly believe June is nearly over, how I’m in denial that the year is halfway through, how time is flying by WAY too fast! (Though that’s all totally true.) Instead, I’ll just jump right into what I’ve been up to lately. 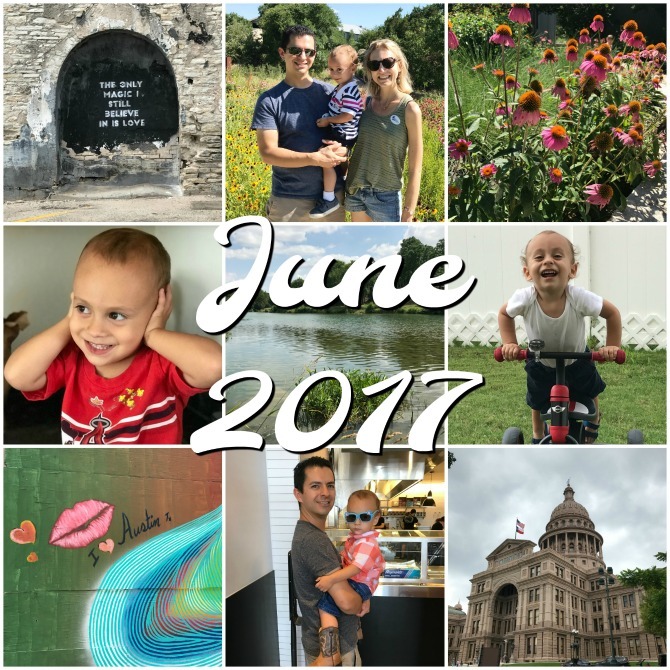 Thanks to some fortuitous timing with library holds, I had the chance to read a number of fairly recently published books this month. Almost Missed You wasn’t the mystery I expected, but was still a riveting read. I was less impressed with The Jane Austen Project, despite its excellent premise (time travel? Jane Austen? It should have been amazing!). Sheryl Sandberg’s Option B is a powerful look at the grieving process and would be helpful for anyone who is currently grieving or who knows someone who is (which is most of us). 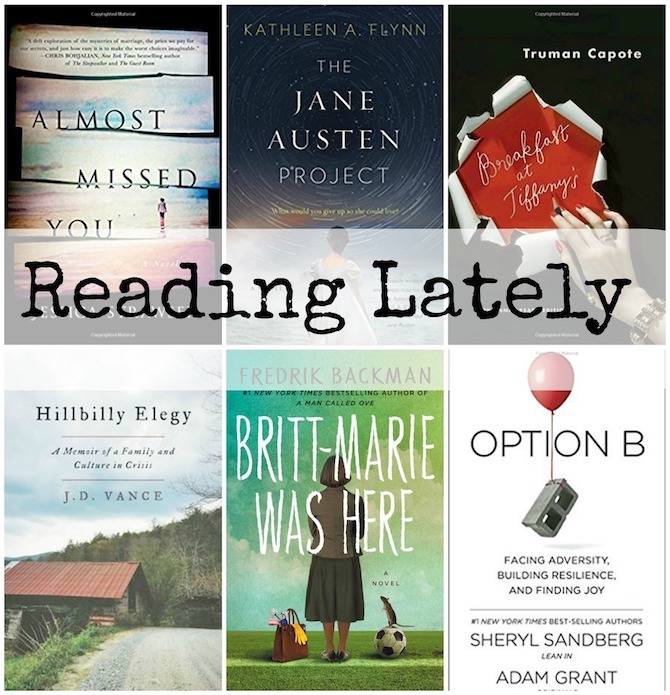 A less recent book, but one I’ve been wanting to read, is Britt-Marie Was Here; it was a delight, though I liked A Man Called Ove even more. I’ve been putting off reading Hillbilly Elegy, but since it was one of the most talked-about books of last year, I figured I should give it a chance. I’m not far enough into it yet to have an opinion, but I’ll share my thoughts (along with full reviews of each of these books) in next month’s Quick Lit post.

My Reading Challenge category for this month was a book written during the 1950s, and I chose Breakfast at Tiffany’s for this decade’s book. It’s very different from the movie, but Truman Capote’s writing is breathtaking.

Jane the Virgin, Season 3: This telenovela-inspired comedy/drama has become one of my favorite shows, so I was CRAZY excited when the third season of Jane came to Netflix soon after the live season ended. I had very mixed feelings about this season. Season 3 is filled with the same mix of humor, drama, and sweetness that make the show such a unique one, and I thought the mid-season time hop was handled well and was a good editorial decision in order to move the story forward. Unfortunately there is a lot more sex in this season, which I wasn’t comfortable with, and a number of the characters made disappointing decisions that were out of line with their previously clean-cut storylines. Final verdict: least favorite season so far, but still a great show that Luke and I both really enjoy. I’m dying to know what will happen in Season 4! 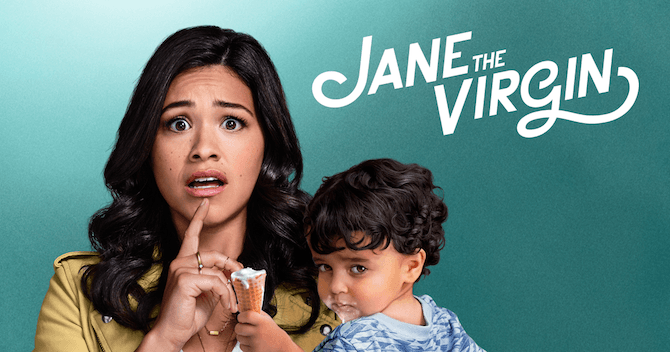 Beauty and the Beast: Since the animated version of this classic story is my all-time favorite, I had very high expectations for this film. And it totally met them! The visuals were perfect, capturing the appearance of the animated version while still seeming realistic. I adored all of the cast, especially Emma Watson; I couldn’t have picked a better Belle. The songs were quite well done  and I was surprised by how much I enjoyed the new additions. The changes to the plot enhanced the story and made me love it even more. Excellent work, Disney! 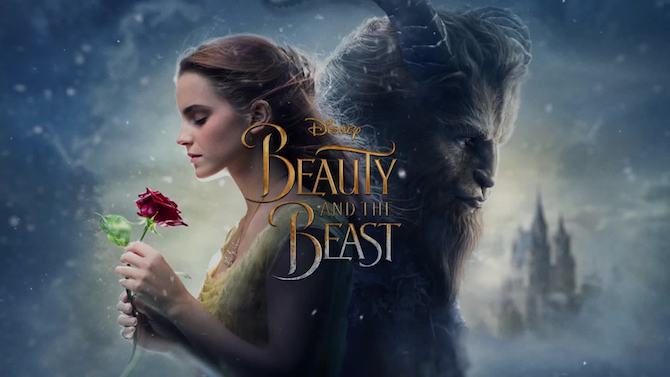 Active Wow Teeth Whitening Charcoal Powder: I’ve been pretty self-conscious about my less-than-pearly-white smile lately, but I have very sensitive teeth that rule out the option for whitening strips or even whitening toothpaste. When I found this powder, which claims to whiten with no sensitivity, I decided to give it a shot. I’ve been using it for a few weeks now (I use a manual brush with the powder first, then follow up with my Sonicare and sensitivity toothpaste). I don’t know if my teeth look any whiter, but they feel amazing. Brushing with black characoal is admittedly a little strange and takes some getting used to, but afterwards my gums and teeth feel smooth and cleaner than ever. Hopefully they will start looking a little whiter, too. 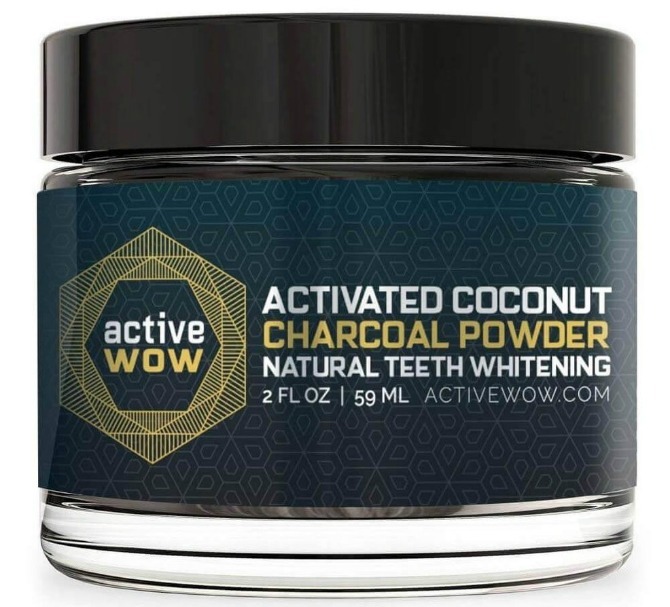 Care-Bear Inspired Moccasins: Just to be clear, I have not purchased a pair of these ADORABLE new moccs from Freshly Picked. Their website shows boys wearing them, but I think they’re a bit too girly for Charleston, and unfortunately he’s so hard on his shoes these days that it’s hard to justify buying him another pair of soft-soled moccs that he’ll quickly wear through. (We still have his other two pairs, but they have small holes in the toes, so we reserve them for indoor days). BUT, even though I won’t personally be buying a pair of these darling shoes, I am utterly in love with them. Care Bears have always held a special spot in my heart, and they seem like the perfect pairing for my favorite kids’ shoe company. If you have a young daughter, could you pretty please buy her a pair of these and send me some pics? Thanks! 🙂 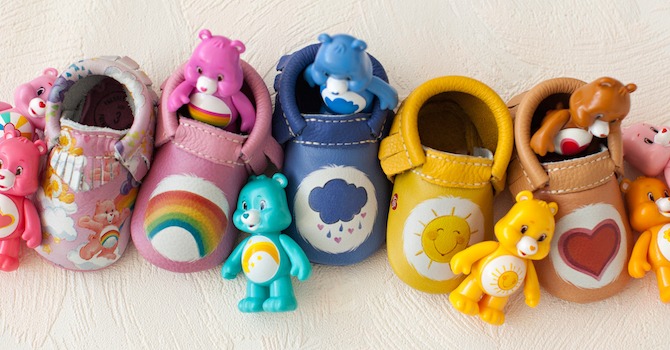 Charlie has been doing and saying the most hilarious things lately. Since I use these Lately posts as a family journal, I’ve decided to document some of those moments here so that I can look back on them in the future—and so you can enjoy some of his cuteness, too. 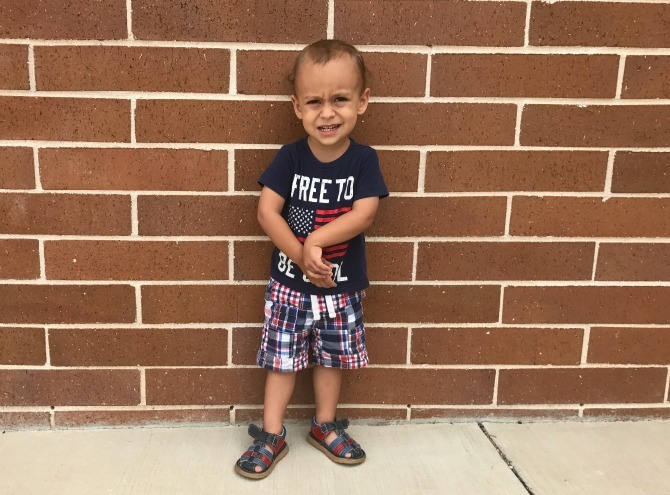 After receiving a few not-so-subtle hints from God this month, I decided a shift in perspective was needed for this month’s iteration of spreading love in 2017. Instead of explicitly trying to love others in new and unique ways, I’ve been allowing myself to be the recipient of love—specifically, God’s love. My time with God has been focused on simply basking in His love and letting the fact of my identity as His beloved child to sink in to my core. I’ve been reflecting on God’s blessings and on the clear ways He has shown His love to me, and I’ve been relishing His goodness without trying to instantly pay it forward. I want to live a life that reflects God’s love, and I’m realizing that in order to do that, I must fully embrace that love and believe it for myself. 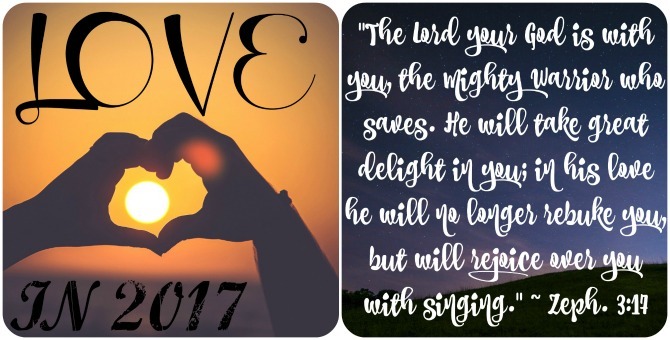 We attended Bubblepalooza at the Long Center downtown. Charleston is finally old enough to appreciate these sorts of events! There were food trucks, lawn games, a huge parachute (a highlight for Charleston) and all sorts of bubble-themed activities. It was really hot, and Luke and Charlie were both getting over being sick, so we didn’t stay long, but it was still lots of fun. 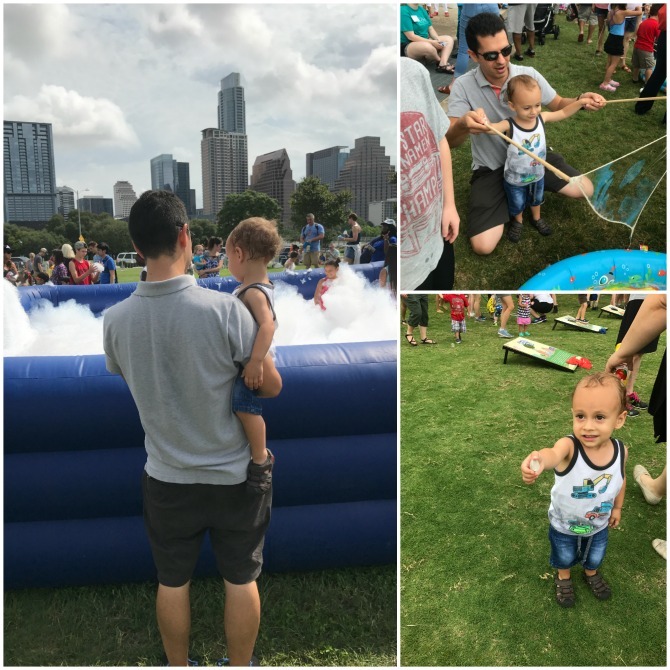 My best friend Cara visited us from California for a few days! This was her second time visiting us, and since we did a lot of the touristy Austin things last time, we spent most of her visit closer to home. She came to storytime at the library with Charleston and me, she attended church with us on Sunday, we hung out at the neighborhood playground, and I got her hooked on the Great British Baking Show. We spent a day in Georgetown (my personal favorite spot), eating lunch at Hat Creek and walking along the trails behind the swimming hole in town. And we took her to lunch at Gordough’s, a donut-themed restaurant that we now visit with all of our out-of-town guests. 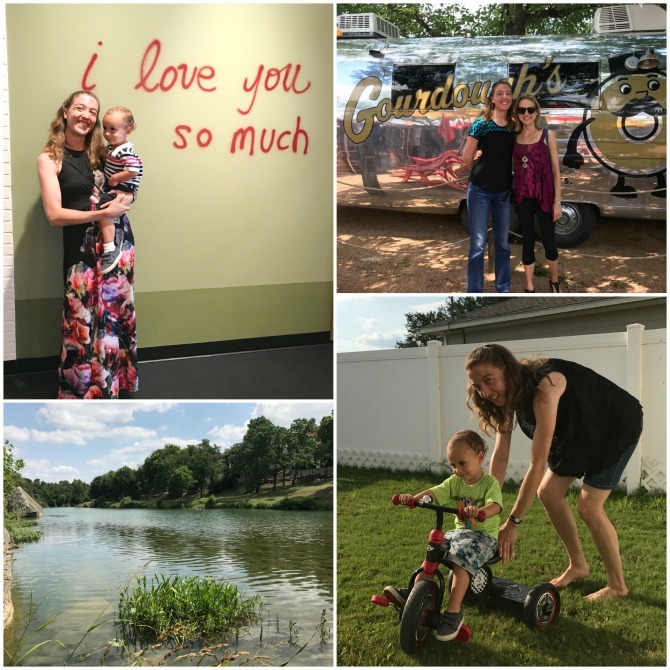 On the Friday while Cara was here, my sister-in-law took Charleston with her to a company family picnic. Luke had to work, so Cara and I had a whole girls’ day to ourselves! We took the train downtown and walked eight miles exploring the city (easy to do when you are kid-free!). We did a tour of the Capitol, explored the SoCo district, and had lunch at Hopdoddy. I enjoyed all of Cara’s visit, and Charleston loved having Miss Cara stay with us (the two were fast friends) but that full, kid-free day together was the definite highlight. 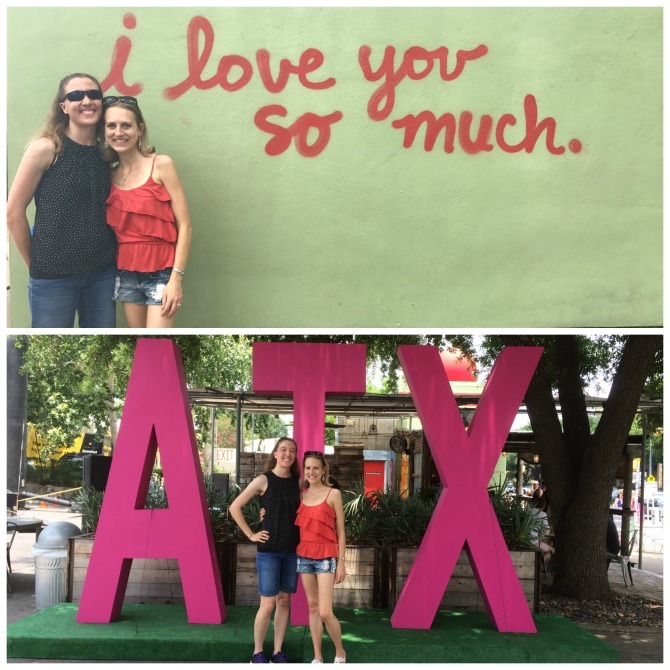 On Cara’s last day here, we had lunch at The Shady Grove, a quirky restaurant we’ve been wanting to try (we all loved it!). Then we went to the Lady Bird Johnson Wildflower Center, a beautiful botanical garden downtown. It’s very different from the Zilker Botanical Garden—more spread out and open, with a prairie feel, whereas the Zilker Garden is more jungly. I would be hard-pressed to choose a favorite between the two, as both are stunning. The Lady Bird Center was probably a better fit for Charleston, as it had more areas for him to run around. I wish we’d gotten to spend more time there (we got there an hour before it closed) and I can’t wait to go back. 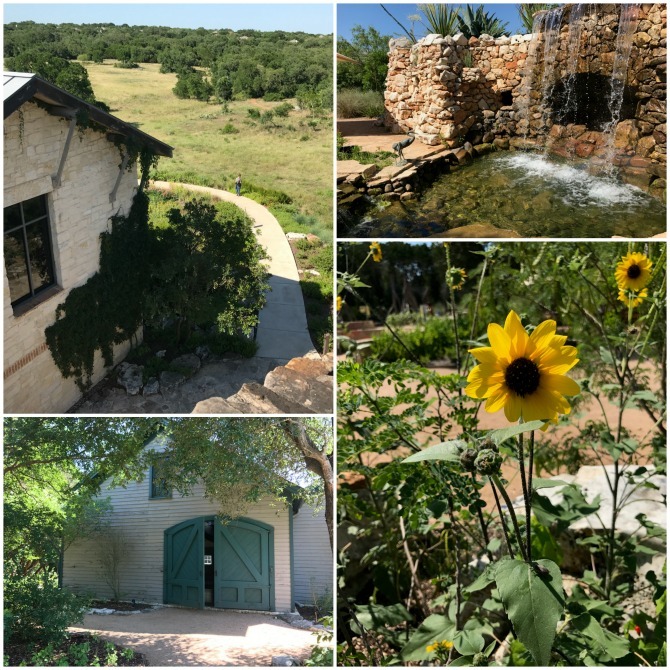 We took Charleston to have his first hair cut. I hated to see him lose those baby curls, especially since he was a baldy for so long, but he’ll be 2.5 next month and I had to admit that a first hair cut probably was in order. (Luke has been begging me to do it for months.) We took Charleston to Luke’s barbershop, and he did great. There were no tears, and I was impressed that he was able to sit still for so long. Afterwards, he was rewarded with his very first sucker (which was a HUGE hit). I can’t believe how grown up my baby looks with his shorter hair! 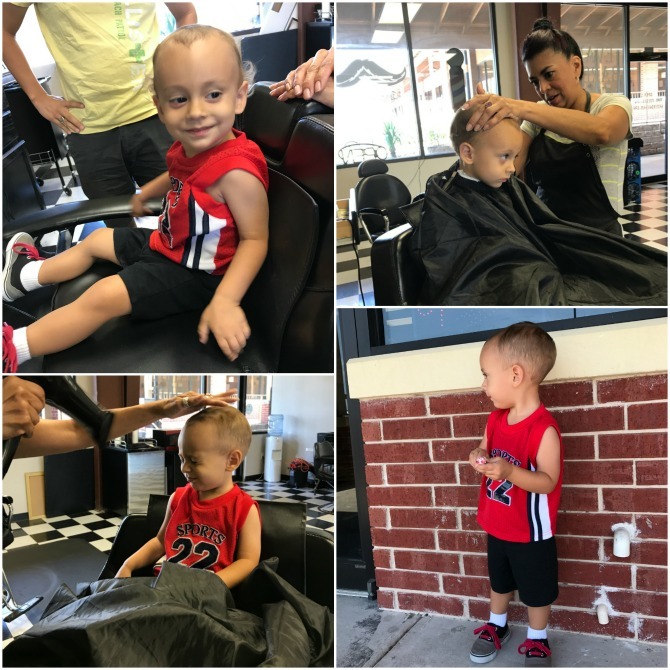 We are in the middle of Week Two of the swim lessons we are taking through our city. I was a little worried about how Charleston would do since he hadn’t been in a pool since last summer, and even then we didn’t swim much. But he’s proven to be quite the little fishy! He fearlessly jumps off the side, dunks his head, blows bubbles, kicks his feet, and generally makes his mama quite proud. The water has been a little cold for me, so Luke has been the parent going in with him, though I’ve joined them on the warmer days and it’s been a fun family event. 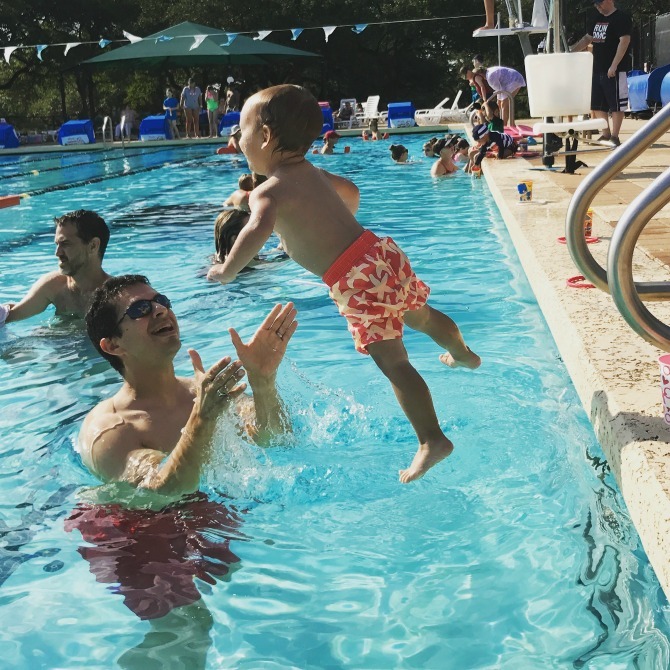 As always, I’m linking up with Leigh Kraemer to share what we’re into this month. What were some of your June highlights?