February has always been my least favorite month of the year. The excitement of Christmas has long since worn off, January resolutions have lost their luster, and the warm days of summer seem depressingly far away. However, this particular February was my first full month as a mom, it’s true what they say: having children change everything; ironically, this once-loathed time of year has proven to be one of the best months of my life. Here are some of my highlights from the past several weeks. 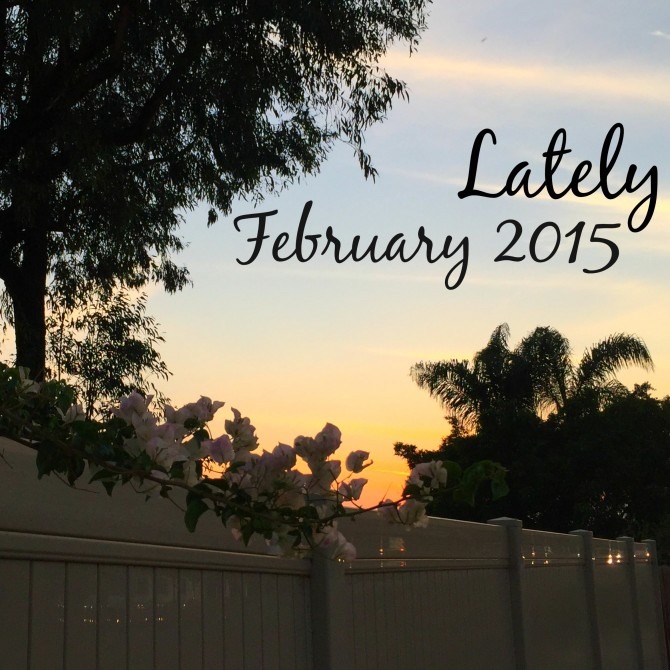 As predicted, my book consumption has significantly dwindled since having a baby—not because of a lack of time, but because I’m so sleep deprived that I’ve been struggling to focus long enough to get through a book! I haven’t stopped reading altogether, though. Here are a few of the books currently on my nightstand (or iPhone). 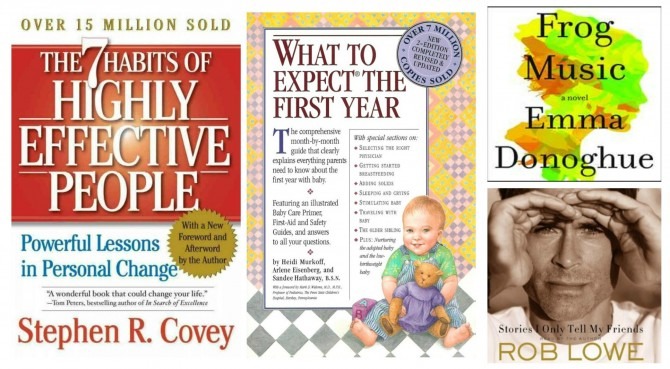 The 7 Habits of Highly Effective People, by Stephen R. Covey: This classic has been on my to-read list for years, and I finally got around to picking it up after multiple positive references from Jess Lively of The Lively Show. I’m only a few chapters in, but I’ve already learned a great deal about the importance of living a values-based life of integrity; there is so much great content here, I think I’ve highlighted at least one quote on every page. I’m looking forward to digging into the individual habits and beginning to put them into action.

What to Expect the First Year, by Heidi Murkoff: What to Expect When You’re Expecting was a faithful companion throughout my pregnancy, but I find I’m liking this follow-up even more (though that’s very likely because I enjoy having a baby SO MUCH more than being pregnant!). While Dr. Sears’ book has become my go-to for answering baby-related questions, I do like this book’s monthly format and I’m reading each month as Charlie approaches it. One difference between this book and When You’re Expecting is that the monthly milestones are visible (as opposed to being hidden inside my belly), so I know I’ll have to keep my mommy angst in check if/when Charlie doesn’t line up with an “expected” milestone; I’m already reminding myself that all babies progress at different rates, and just because Charlie hasn’t smiled/rolled over/talked when the book says he “should” doesn’t mean that something is wrong!

Frog Music, by Emma Donoghue: (Audiobook) I listened to Emma Donoghue’s Room a couple of years ago and it quickly became one of my favorite books, so I had high expectations for the author’s latest novel. Unfortunately, I was sorely disappointed. Set in San Francisco during the summer of 1876, the book tells the story of a French Burlesque dancer who sets out to solve the murder of her eccentric friend, a cross-dressing frog catcher. While the setting is intriguing and I enjoyed the mystery element and even the episodic narrative style, the storyline seemed disjointed and I was disturbed by the copious amounts of perverse sex. I felt no connection to any of the characters and found myself caring little about their plights. This was an ambitious attempt from Ms. Donoghue, but sadly it was a swing and a miss for me. My Rating: 2 stars.

Stories I Only Tell My Friends, by Rob Lowe: (Audiobook) I don’t know much about Rob Lowe and haven’t seen any of his movies, but I loved him in Parks and Recreation and had heard that he was a talented writer, so I was intrigued by this memoir. The book delves into his time in Hollywood and Lowe spends most of the book sharing detailed behind-the-scenes anecdotes of his various film projects. These stories are interesting, but Lowe seems almost obsessed with celebrity name dropping while offering little of himself as a person. I appreciated the few glimpses into Lowe’s personal life, and found his writing about his wife and sons to be particularly touching, but I came away knowing a lot about Lowe’s career and little of Rob Lowe the man. On a positive note, I enjoyed Lowe’s narration, particularly his dead-on impressions of various celebrities that appear in his book. My Rating: 3.5 stars. 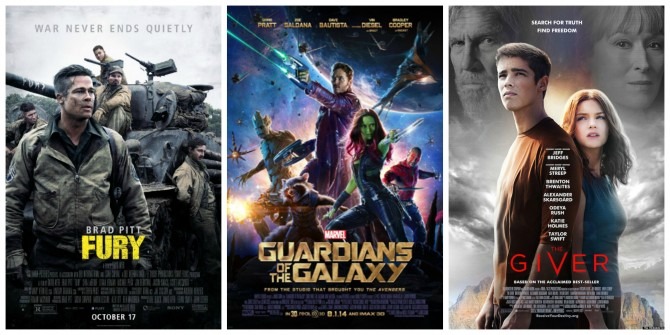 Fury: I would not have chosen to watch this movie myself, but it was Luke’s birthday evening pick, so I went with it. This World War II film is incredibly graphic, almost gratuitously so: I know that war is messy and violent, but the level of gore and viciousness seemed over-the-top (though maybe I’m underestimating the horrific nature of war). The film explores faith themes that add some redemptive value to the movie, and the acting is superb, but ultimately I was turned off by the atrocious language (did people really swear this much back then?) and violence. My Rating: 1.5 stars.

Guardians of the Galaxy: This was another movie I wasn’t eager to see, but Luke had been talking about it since before it came out, so I finally caved. . . and it proved to be even worse than I had expected. The sci-if sets and costumes were way too bizarre for my taste, and the humor was cheesy and not at all funny. Like most movies in this genre, there was too much glitz and action and not enough character development or storyline. The one bright spot to the film was Chris Pratt who I thought did very well with his role. My Rating: 1.5 stars

The Giver: I can’t let Luke make ALL of our movie selections; this one was my pick! The Giver is one of my very favorite books, and I was so excited to finally see it come to the big screen. From what I’d seen in the previews, I expected the film to stray pretty far from the novel, but it actually remained fairly faithful to the original story, and I loved seeing the filmmakers’ interpretation of the society. The film was well produced, and the color transition used to depict Jonas’s coming into the memories worked particularly well. Portions of the movie were different from the book, but I felt it maintained the themes and general feel of the novel, for the most part. My biggest criticism was Jonas’s age: in the book he’s 12, but he’s much older in the movie (and the actor who plays Jonas is 25!). I also thought the romantic relationship between Fiona and Jonas was a bit overplayed. Overall, though, I’d consider this film interpretation a success. My Rating: 4 out of 5 stars. 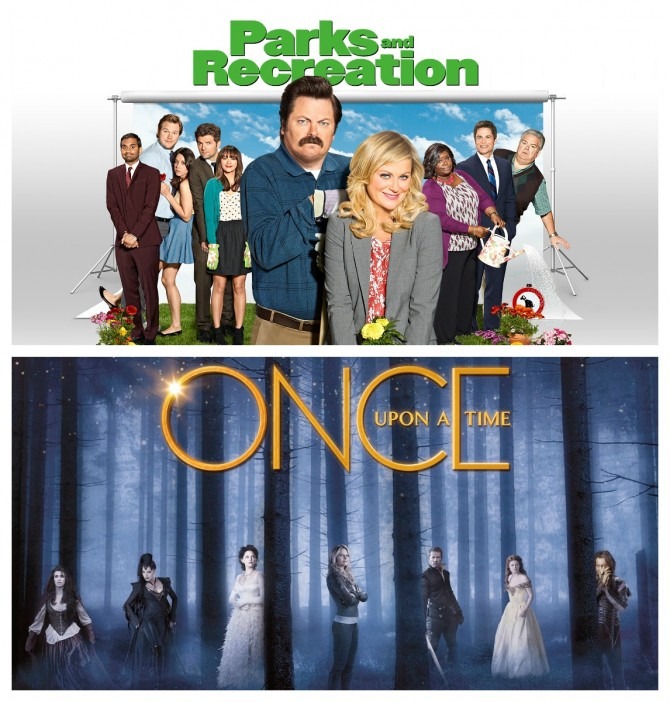 Parks and Recreation, Season 6: With this season, Parks and Rec might have moved into position as my favorite sitcom. The writing and acting are both strong this season, and though I hated to see Ann and Chris leave, their transition away from the show was smooth and believable. I really enjoy the new character, Craig, and was happy to see more of Donna and Jerry. I can’t believe there is only one more season, but I’m excited to see what happens!

Once Upon a Time: I cannot begin to describe how much I am LOVING this show, which I would describe as Lost with a Disney spin. The stories are so clever, the costumes are beautiful, and I’m seriously impressed with the actors’ abilities to swing between their Fairy Tale and modern-day roles. We’re halfway through Season 2 right now, and though I did like Season 1 more, I’m still very much enjoying the show. I only hope that the story lines don’t become too convoluted, à la Lost in the later seasons.

Introducing Charlie to his Great-Grandmother: My “Oma” turned 90 this year, and she celebrated her birthday with a visit to see her great-grandson (on his two-week birthday). Oma is my only surviving grandparent, and it was so special for me to introduce her to my son. 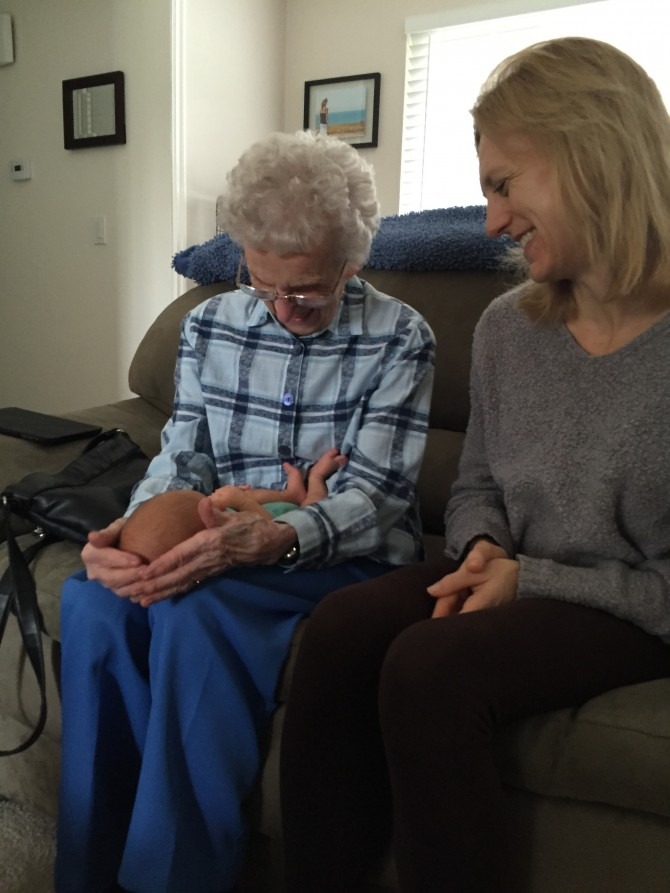 Summer in February: When I first found out I was having a winter baby, I anticipated several long weeks cooped up inside, with chilly weather preventing me from leaving the house with my newborn. Apparently, I had forgotten that I live in Southern California! I couldn’t have asked for better weather over these last few weeks: with temperatures in the 70s and 80s, I’ve been living in shorts and flip-flops, and we’ve been able to take Charlie on walks every day. Having a winter baby hasn’t been so bad after all. 😉 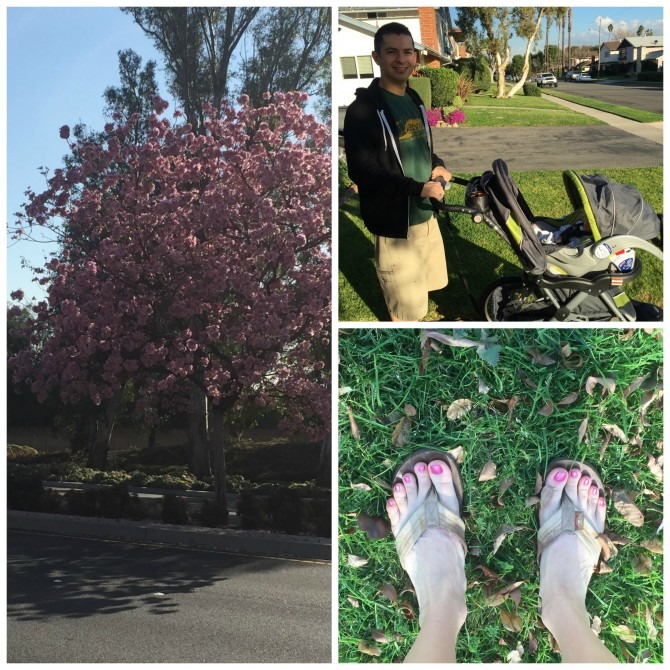 Aidell’s Chicken and Apple Sausages: When Luke started his Whole 30 diet at the beginning of the year, we stocked up on several meat options at Costco. One new-to-us purchase was a package of these sausages. Not only do they have an impressively clean ingredient list, but they are absolutely delicious! I’ve been chopping them up and putting them into stirfrys and on top of salads, but they would also be good on a bun or just on their own. I should probably try some other varieties as well (the pineapple and bacon sausages sound interesting), but this flavor is so good that I haven’t felt the need to branch out. 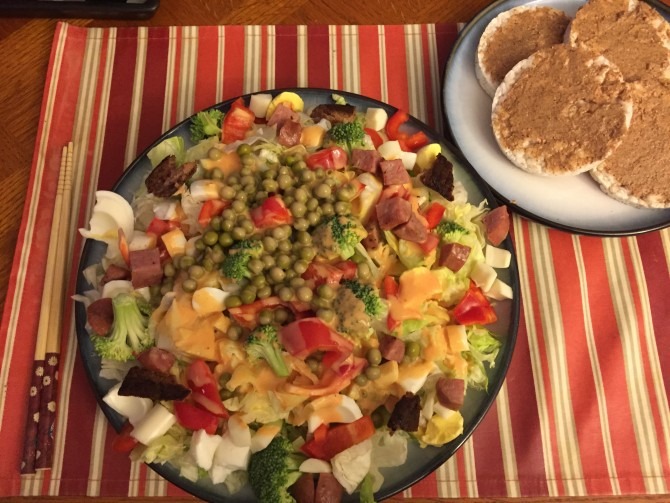 Celebrating Luke’s 31st Birthday: Luke’s birthday is February 7th, and since Charlie was due on the 5th we thought they might share a birthday. Since Charlie came in January instead, it looks like Luke gets to keep his day all to himself! We had a pretty low-key day, but we got in all the important stuff: presents (including a 35-pound kettle bell that was extremely hard to wrap), cards (with one from Charlie!) and our traditional Golden Spoon frozen yogurt topped with the appropriate number of candles (<– impressively, that yogurt was the only dairy or sugar Luke has had since the start of the year). 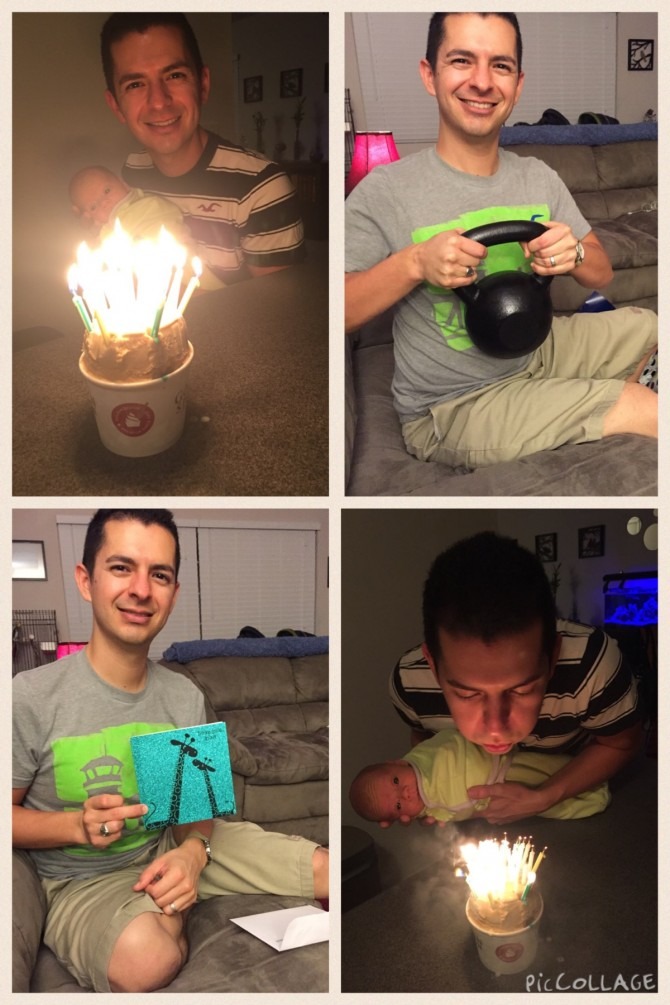 Babywearing: We were slow to enter the baby wearing game since our wraps all said they were designed for use with babies over 8 pounds. Now that Charlie is a bit bigger, we’ve been wearing him all the time. These wraps are a total game-changer! I was able to take Charlie grocery shopping today, and I no longer have to haul our stroller everywhere or wait for Luke to come home to hold Charlie while I get things done around the house. I’m loving our Moby Wrap, while Luke is more comfortable with the Baby Bjorn. Charlie seems to love both of them: he’s just happy he gets to snuggle with his parents all day. 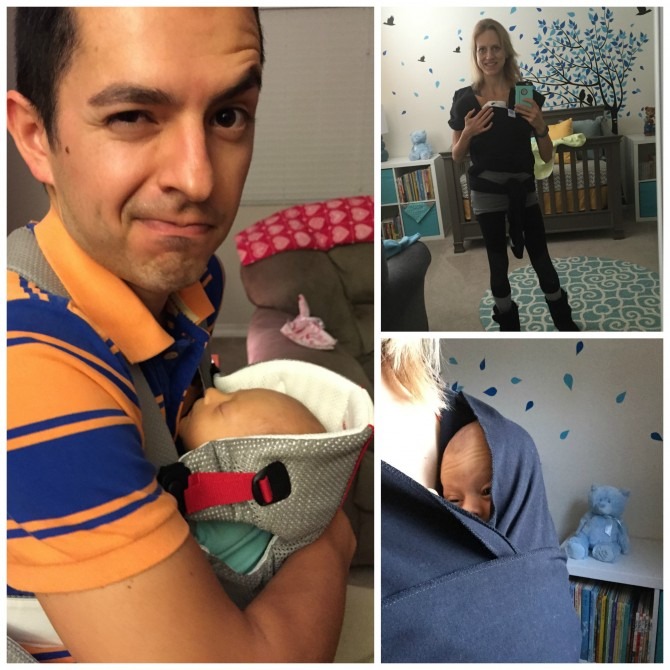 My Valentine’s Day Present: Since it falls shortly after our anniversary and directly between our birthdays, Luke and I usually don’t exchange gifts on Valentine’s Day. However, this year he surprised me with the most amazing present: a wood print customized with photos from Charlie’s first photo shoot. The print, which is gorgeous, came with a free LOVE print that is also beautiful. They look great on our mantle, and I am so happy to have pictures of our little family on display! 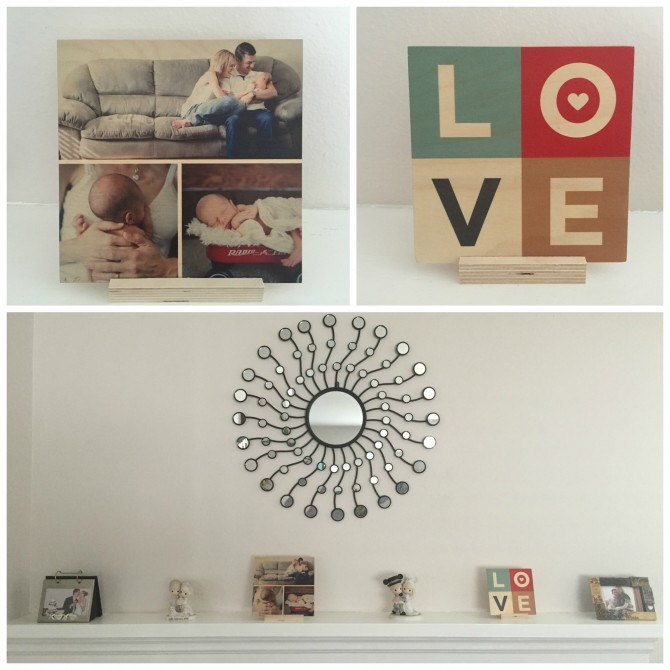 How has this February been treating you? Leave a comment to fill me in on your month’s highlights, and head over to Leigh Kraemer’s site to read what other bloggers are into this month.