At the end of each month, when I look back at what I’ve read recently, I like to search for patterns and themes in the books I’ve been reading. I don’t (usually) set out to follow a theme when making my book selections, but in retrospect I’m often able to see some patterns emerge. However, this month’s selections were a totally mixed bag: there were romances, literary fiction, self-help, history, and even apocalyptic YA. The one common theme was that all but two were published within the last couple of years. Without further fanfare, here are my thoughts on my eclectic mix of recent reads. 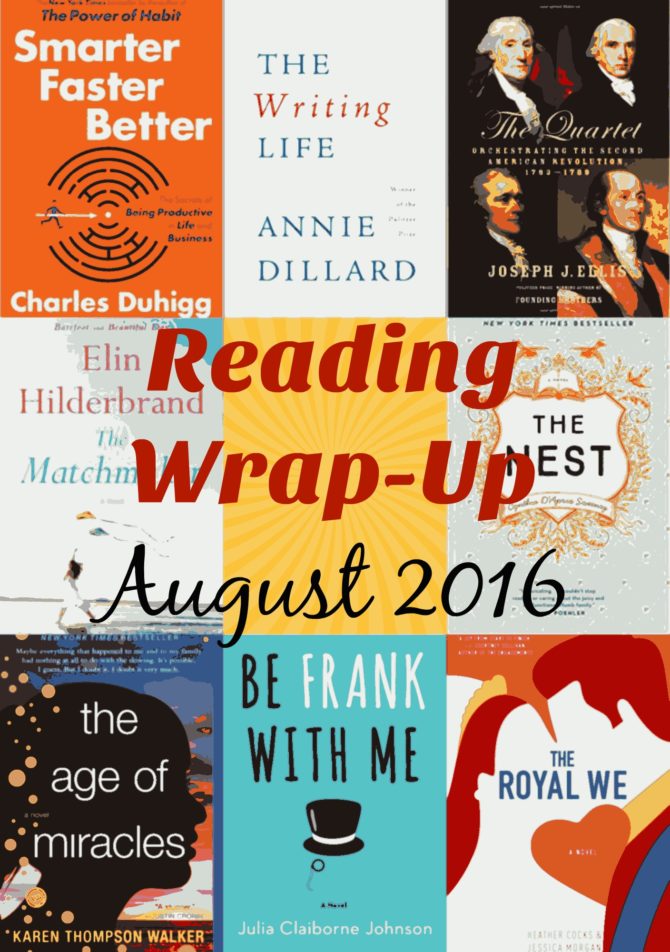 The Royal We, by Heather Cocks and Jessica Morgan: This lighthearted work of Royal fan fiction retells the love story of Kate Middleton and Prince William, with the twist that the book’s version of Kate is an American named Rebecca “Bex” Porter. The novel begins with Bex’s arrival at Oxford, where she meets and falls in love with Prince Nicholas. Their tumultuous, years-long courtship is both funny and painful, and of course is further complicated by the intrusion of various family members (fictional doppelgängers of Pippa, Harry, and even Diana). The main characters are well-developed (though totally unlikable) and I enjoyed both the beginning and end sections of the novel. However, like the Royal family itself, the novel suffers from “too much”: too many side characters, too much sex and drama, and simply too much length. Still, it is an entertaining read and I’m excited to see that it’s going to be made into a movie.

I heard an interview with the book’s authors on The Lively Show when the novel was first released, and I was intrigued to hear about the mechanics of writing with a partner. The authors did a great deal of research on the British royalty to make this novel as accurate as possible, and while I’ve never fully understood the Royal fascination, I enjoyed their take on what life might be like for this highly scrutinized family. My Rating: 3.5 stars. 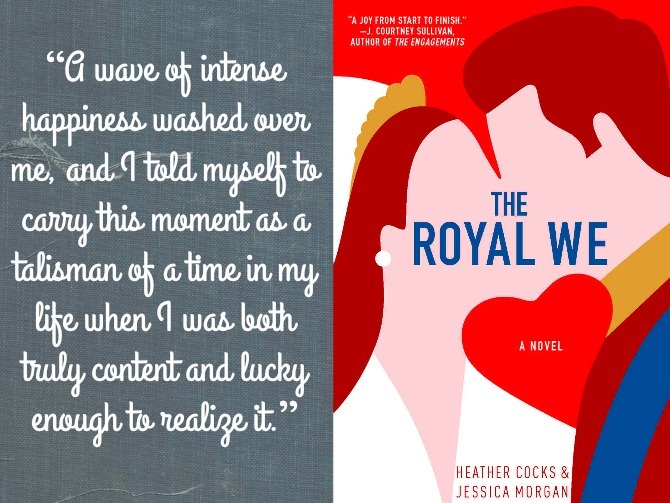 The Writing Life, by Annie Dillard: I always enjoy reading what authors have written about their craft: this meta “writing about writing” serves to inform my reading, and it motivates and inspires my own work as a writer. I haven’t read anything else from Annie Dillard, but I was still eager to hear her experiences as a writer.

In this short, dense collection of essays, Annie Dillard offers a window into her love/hate relationship with her craft. Amid poignant accounts of her own writing experiences, Dillard shares insightful suggestions for fellow masochistic souls who have chosen to engage in the tortured but transcendent life of a writer. This slim collection is an excellent resource for any writer, for both its rich advice and magnificent prose—true examples of writing at its finest. My Rating: 4 stars. 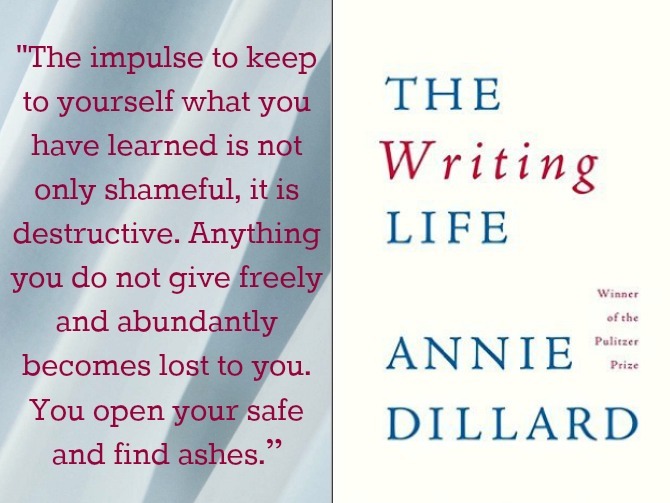 Smarter Faster Better: The Secrets of Being Productive in Life and Business, by Charles Duhigg: For a while it seemed like everyone was talking about The Power of Habit. I read and enjoyed that book (though I preferred Gretchen Rubin’s similar Better Than Before) and I was eager to read more from this insightful author.

Duhigg’s latest book is about the science of productivity and aims to guide readers in using a set of key skills to lead more productive lives. Unfortunately the book fails to deliver on that promise. Duhigg is a gifted storyteller and I did enjoy (most of) his recountings of productive companies and individuals, though some of the stories were admittedly pretty boring. However, the book’s mishmash of stories lacks cohesiveness and purpose; the examples are interesting, but not at all reflective of the book’s themes, and Duhigg offers disappointingly little in the way of suggestions for implementing the strategies demonstrated within the book’s pages. The book’s appendix does include a helpful reader’s guide to using these ideas, but it’s an instance of too little, too late. My Rating: 3 stars. 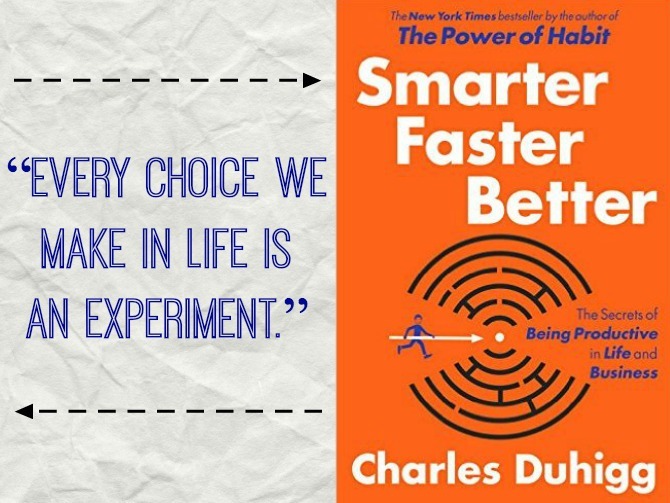 The Quartet: Orchestrating the Second American Revolution, 1783-1789, by Joseph J. Ellis: We all know the story of the founding of our nation. But the facts behind America’s origins are different from the stories we learned in history class. When 13 colonies declared independence in 1776, they were doing so as independent states who joined forces only for the sake of defeating a common enemy. It wasn’t until after the American Revolution that our founding fathers, particularly four men—George Washington, Alexander Hamilton, John Jay, and James Madison—fought to unite the colonies to form the America that we know today. In The Quartet, Joseph J. Ellis describes the momentous task faced by this quartet of American heroes as they paved the way for the UNITED States of America.

The people and events of this book are all familiar, but I have previously viewed them with modern eyes, filtered through the muddying lens of subsequent happenings and ideological shifts. Ellis helped me to understand these men, their actions, and their motivations within the context of their own place in history. Never before have I so fully appreciated the miracle that was the formation of our country. My Rating: 4 stars. 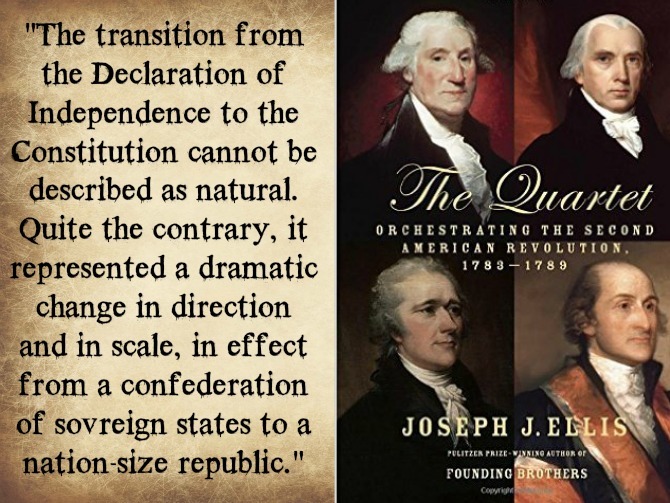 The Matchmaker, by Elin Hilderbrand: Dabney Kimball Beech was born and raised on Nantucket, and she serves as director of the island’s chamber of commerce with a Leslie Knope-like zeal. Dabney’s enthusiasm extends to the residents of Nantucket, many of whom she has helped to find true love. Despite her reputation as the island’s matchmaker, Dabney is unable to find love for those closest to her: her best friend is unhappily single, her daughter is engaged to an abusive man twice her age, and Dabney’s own marriage is tired and loveless. This all begins to change when Dabney’s childhood sweetheart returns to the island, giving her a second chance at true love.

I won’t deny this book’s readability. It’s not particularly well-written, but I wouldn’t expect a literary masterpiece from an author known for summer romances, and the story was engaging enough to hold my attention to the end. However, I was very disappointed with the characters: even those whom we are “supposed” to like are arrogant and morally depraved. (They also have ridiculous names; I’m all about name creativity, but names like Dabney and Clendenin, Agnes and Box really distracted from the story.)

My biggest qualm with the novel is its premise that there is one “perfect match” for everyone. I don’t believe in this idea and think that it is actually quite a damaging concept, particularly when it is used to justify affairs and other unethical choices. I know this is just a book, but it pains me to see this myth perpetuated, even in fiction. My Rating: 2.5 stars. 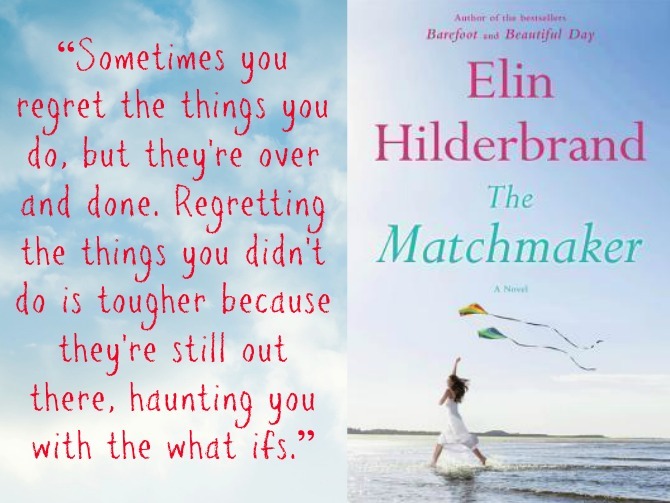 Be Frank With Me, by Julia Clairborne Johnson: M. M. “Mimi” Banning is a reclusive literary legend who hasn’t published a novel since the decades-ago debut of her coming-of-age classic. Now living in Hollywood and facing financial ruin, Banning has promised her publisher a second book if he in turn sends an assistant to provide care for her nine-year-old son, Frank.

When Alice arrives at the Banning mansion to serve as Mimi’s assistant, she discovers that this will be no ordinary nannying job. Frank is an eccentric child with a photographic memory for Hollywood trivia and a wardrobe that resembles the costume closets of a 1930s film set. Alice is both drawn to Frank’s charm, and terrified by his idiosyncrasies. His mother proves to be of no assistance, as the prickly Mimi shows nothing but hostility toward her enthusiastic young assistant. As Alice struggles to stay afloat in her new position, she becomes consumed with solving the puzzles that surround this enigmatic duo.

Be Frank With Me is hilarious, charming, and at times utterly heartbreaking. I loved all of the Hollywood trivia and Los Angeles descriptions, and I immediately fell in love with the character of Frank, whose vivid personality dominates the book. I would have preferred a fuller story and more conclusive finish, but the captivating characters kept me engaged right up to the last page. I’m so glad I read this interview with the author before jumping into the book; it really helped me to appreciate the novel at a much deeper level. My Rating: 4 stars. 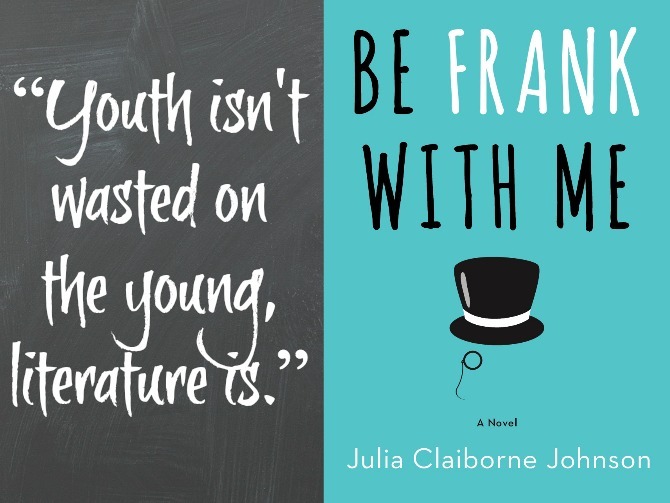 The Nest, by Cynthia D’Aprix Sweeney: It’s impossible to read anything about the literary landscape of 2016 without stumbling across references to The Nest. This highly publicized debut novel tells the story of the Plums, four self-absorbed adult children living out their own unique forms of dysfunction as they await the promised inheritance that is sure to be the answer to all of their problems. Not surprisingly, the anticipated nest egg fails to materialize, forcing the siblings to stumble through the shambles of their fractured family as they confront their various crises.

Based on the attention this book has received, I went in with high expectations that were immediately shattered. D’Aprix Sweeney excels at painting complex and engaging (albeit loathsome) characters, but the plot itself is lacking substance. The narrative doesn’t pick up until the last quarter of the book, and even then the plot is consistently derailed by rabbit trails into the stories of superfluous side characters. Despite some exquisite passages of prose and a surprisingly satisfying (though predictable) conclusion, the moral depravity that holds center stage in this novel kept it from being a real winner for me. My Rating: 3 stars. 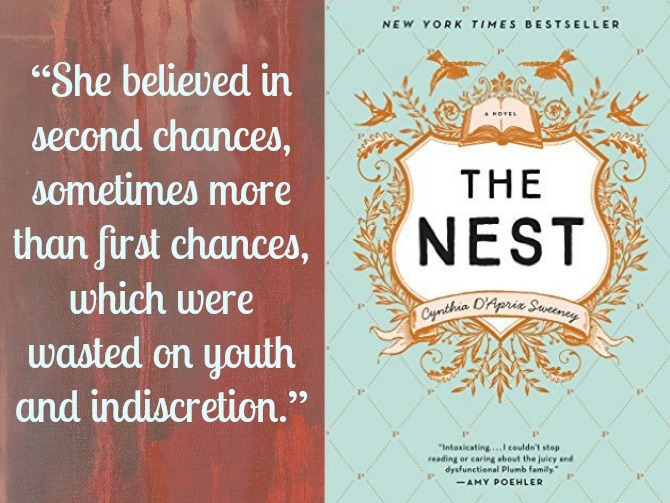 The Age of Miracles, by Karen Thompson Walker: What if the certainty of the sun rising each morning was suddenly not an assurance? What would happen if the days fell out of their natural rhythm, and the seasons were divorced from time as we know it? This is the premise of Age of Miracles, a story told by 11-year-old Julia who is growing up in an unpredictable world made chaotic by the fact that the earth’s rotation has suddenly begun to slow. Julia must face the devastation that is wrecked on the planet and within her own family, while navigating the universal challenges of teenage awkwardness and angst.

The concept in this novel is terrifying and eerily plausible. I love books that force me to think about life in a new way, and this one did just that, evoking many thoughts about the things I deem predictable and true, and what might happen if these certainties were upended. Sadly, I did not care for the novel’s coming-of-age story, which was unoriginal and surprisingly lackluster given the exciting setting. I was disappointed that Age Of Miracles did not live up to its full potential; however, I do think it could provide the source material for an excellent movie. My Rating: 3.5 stars. 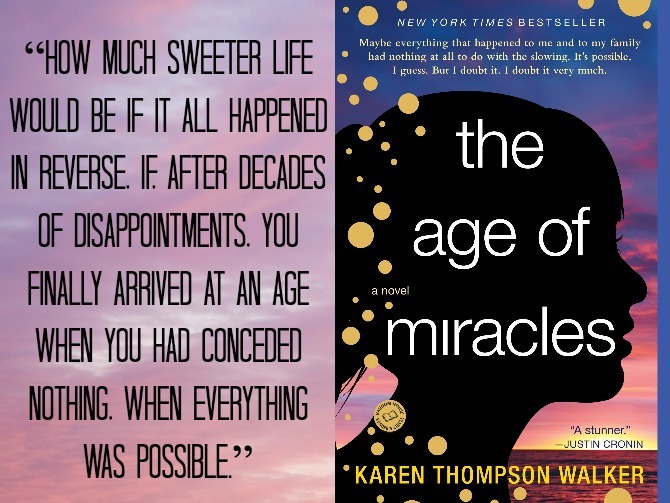 I’m linking up with Modern Mrs. Darcy to share what we’ve been reading this month. What have YOU been reading lately?