I’m back today with a few more quickish reviews of the books I read in the past month. This batch of books contains quite a few titles getting a lot of recognition right now. If you’ve read any of them, I’d love to know what you thought! 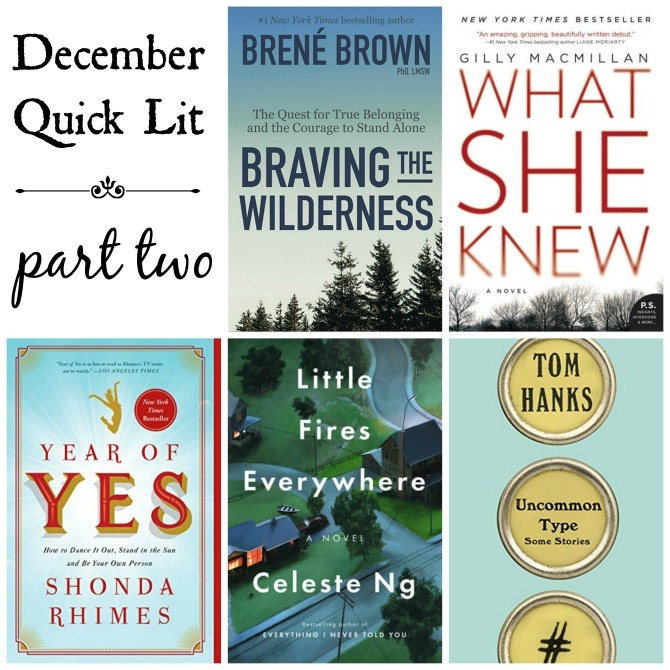 Braving the Wilderness: The Quest for True Belonging and the Courage to Stand Alone, by Brené Brown: I decided to tackle two Brené Brown books in one month. I’m not quite sure what I was thinking—I must have been subconsciously yearning for some emotional heavy lifting. Brown’s works are truly life changing, but the initial reading can be pretty brutal: she requires her readers to confront unhealthy attitudes and actions that are lurking within us, and though she outlines the steps for releasing these interlopers, her prescriptive journeys are rigorous.

In this timely book, Brown argues that our generation is in a crisis of loneliness and disconnection. She explains how we got here and why it is critical that we fight for connection and authentic belonging. Much of the book addresses the current political climate, making the content a little less evergreen than her other books, but also causing it to hit home for me a little more than the others. While the book is very political, it is not at all biased (which is actually one of the premises of the book) and I found Brown’s nonconformity refreshing and bold. She sets a beautiful example of how to address difficult topics without resorting to shaming or fear mongering, but instead taking the high road, treating others with respect and dignity (but also holding individuals and organizations accountable for their actions and words).

This book was an uncomfortable read for me: Brown’s research butts up against a lot of internal beliefs that I now recognize as unhealthy and in need of some recalibrating. There are also a few points that I’m not sure are in line with my own faith and values; however, it’s possible that Brown is on the right path and I simply need to work through a web of cognitive biases before I will come around to embracing these ideas.

A benefit to reading two of Brown’s books back-to-back is that I was able to see how the ideas of this book build on her earlier work. She is such a powerful and insightful thought leader and I am thankful for the ideas she is introducing to a culture that so desperately needs to hear them. 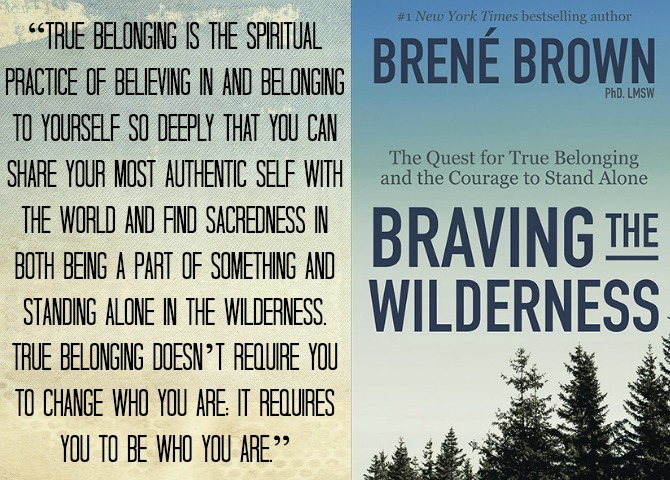 Uncommon Type: Some Stories, by Tom Hanks: Some people truly astound me with their levels of creativity. Tom Hanks is obviously a phenomenal actor, and with this latest short story collection he has shown himself to be quite a talented writer as well. These are mostly quiet stories, providing little windows into the lives of a diverse batch of characters, among them a World War II Veteran celebrating Christmas with his family; a recent divorcée who settles into a new neighborhood; a 19-year-old celebrating his birthday with his dad; and a young boy who is spending time with his mom for the first time since his parents’ split. A thread tying each of these stories together is the presence of typewriters. Apparently Tom Hanks has an obsession with old fashioned typewriters and even wrote this book on one, so it was fun to see how they popped up in unexpected spots within the stories. I also enjoyed spotting aspects of Hanks’ various movie roles in many of the narrators. (I have no idea if this was intentional, or if I have such a hard time distinguishing Hanks from his movies that I was spotting connections that weren’t really there).

Some of these stories are funny, others very sad. Many were quite poignant and almost all of them tugged on my emotions in some way. I do wish there was more plot involved in them, and also some redemption. Many ended just as they were starting to fully grab my attention, and not always in a hopeful place. I was surprised by how much sex and language were included; this definitely isn’t a family-friendly story collection.

Of course I listened to the audio version, and I must say that having Tom Hanks in my earbuds for the course of the book was not at all a bad way to pass ten hours of listening time. 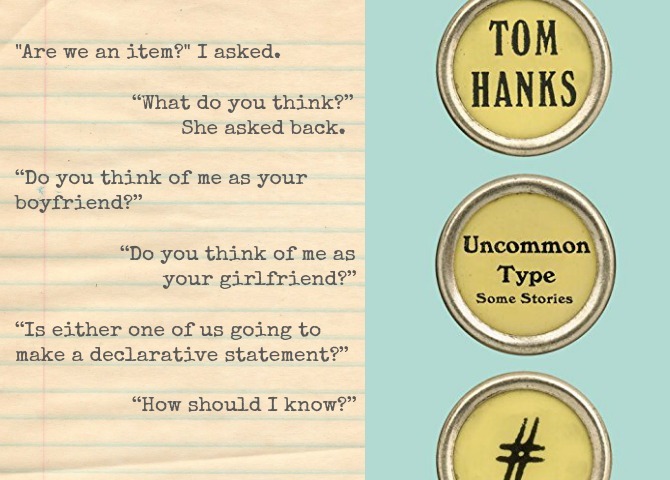 What She Knew, by Gilly Macmillan: The disappearance of a child is every parent’s worst nightmare; perhaps that’s why it’s the premise behind many emotionally charged novels! Books involving hurt or missing children are incredibly difficult for me to read, but it’s likely because they touch a nerve that I can’t quite stay away.

What She Knew is the story of a missing child who vanishes while walking through the woods with his mother. The story is told through the eyes of his mother Rachel, and Jim, the lead detective, both of whom are suspicious and unreliable narrators. As the novel unfolds, the hidden pasts of many involved in the case come to light; whether or not these secrets are relevant to the case remains to be seen, but they deeply affect the ways these individuals cope with the devastating experience.

What She Knew is primarily a psychological thriller, and it certainly succeeded at keeping me glued to the story from start to finish. But the novel offers more than just a cheap thrill, examining intriguing themes such as voyeurism, trauma, and generational damage. Macmillan captures her characters’ emotions and complexities without sacrificing plot. Some of the narration felt a bit contrived, or maybe just too much like many other thrillers I’ve read recently, and I had a hard time with the ending, but overall this is an excellent debut novel and I’m looking forward to reading more from this author. 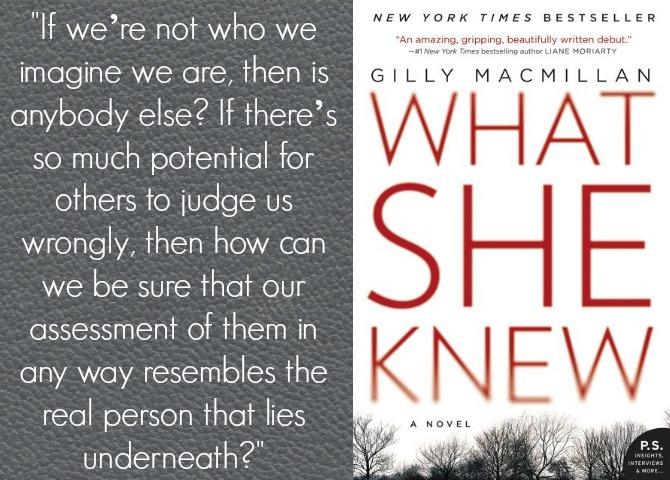 Little Fires Everywhere, by Celeste Ng: The Richardsons are a wealthy family leading a predictable life in Placid Heights, a planned community in the suburbs of Cleveland. Mrs. Richardson prides herself on always following the rules and has high expectations for her four teen children. Life in Placid Heights becomes a little less placid when Mrs. Richardson’s good friend, who has suffered through years of infertility, adopts a Chinese American baby, only to become involved in a custody battle with the baby’s birth mother. Meanwhile, the Richardson’s rental property becomes home to an artist named Mia and her teenage daughter, Pearl. These Bohemian spirits become involved in the Richardsons’ lives, much to the delight of the Richardson children. But Mia and her secret past hold the power to upend the family and even the rest of the community.

The opening chapters of this novel read like a thriller, but don’t be fooled; this book does have some mystery elements, but the centerpiece of the novel is not the plot but the people. Ng offers stunning portraits of each character, delving into the pasts that have shaped them and exploring the little fires trailing each of their decisions and actions. Themes of family (especially the bonds between mothers and daughters), race, ethical choices, and the timeless question of “nature vs nurture” are all present, driving the story in some intriguing ways and offering excellent book club discussion points. (I would love to read the one with a group!) This novel was less eventful than I anticipated, but also more powerful. 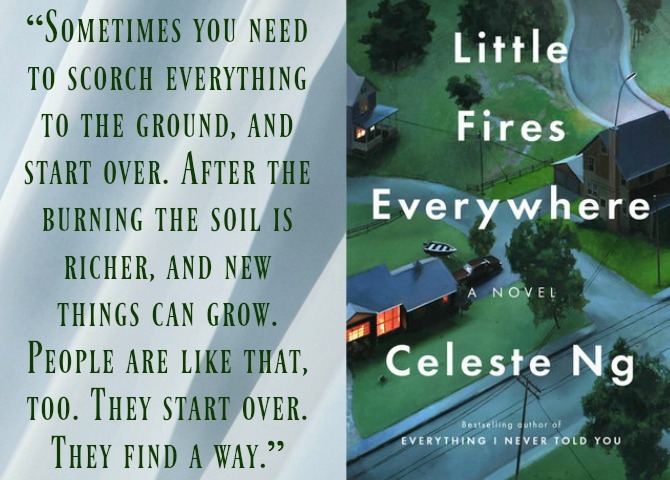 The Year of Yes: How to Dance It Out, Stand in the Son, and Be Your Own Person, by Shonda Rhimes: I’ll preface this by saying that I’m not a Shonda Rhimes fangirl. Prior to this book I had no idea who she was, what she was known for, or even what she looked like; I’ve never seen Grey’s Anatomy or Scandal and didn’t even know the role she played in their creation. But I’m a sucker for a celebrity memoir and this one came highly recommended, so I said yes to the book. And I was impressed! Rhimes is an astoundingly talented writer—witty, smart, and at points downright hilarious. She is an excellent storyteller (go figure! I guess that’s why her shows are so successful, hah!) and shares her journey and her emotions in a way that is surprisingly relatable given her not-so-relatable job title and lifestyle.

The book’s title implies that it is a self-help book. Really it’s just an essay collection with most of the essays focusing on changes Shonda has made in her life over the course of a year when she decided to start engaging in life rather than hiding from it. Shonda discusses motherhood, weight loss, relationships, feminism, and many other hot-button topics. Her views are much more liberal than mine and some of the content (particularly related to feminism) was not at all in line with my own opinions, but I did enjoy hearing her perspective. And I was inspired by her unique brand of humble confidence. Her story is indeed quite inspirational, and demonstrates the potential within each of us to make positive, constructive changes in our lives. 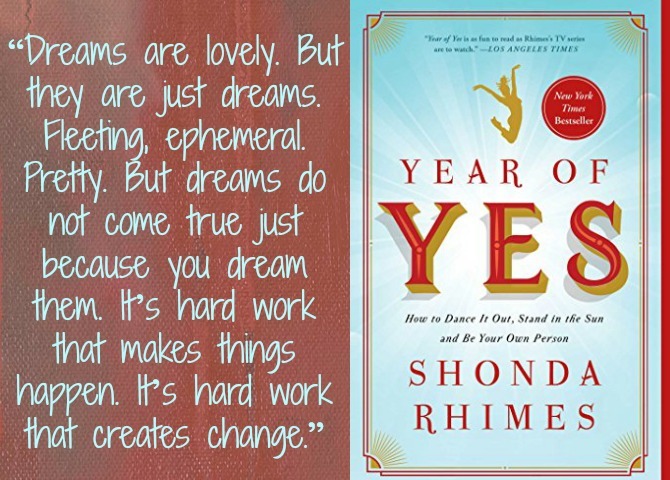 I’m linking up with Modern Mrs. Darcy to share what we’ve been reading lately. If you’re here from the linkup, thanks for stopping by! Be sure to check out Part One of this month’s Quick Lit with reviews of five other books I read this month. 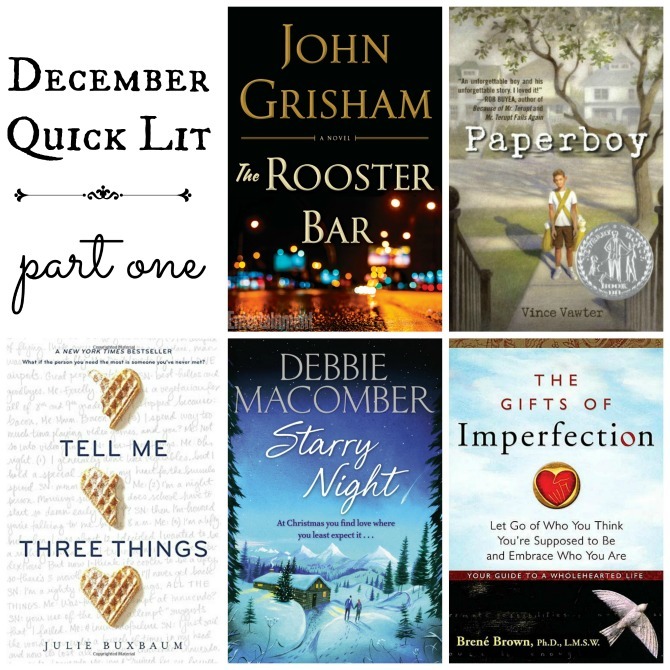