We were out of town for the first week of this month, our biannual trip home to California. It’s interesting how traveling—getting out of our usual routines and spaces—can give us fresh eyes. It’s an unsung benefit of vacation, this accompanying shift of perspective. Even a trip to a place I’ve been numerous times before (a place where I spent most of my life) can teach me new things about my world, and about myself. And the effect can linger, lasting long after the suitcases have been unpacked: a vacation at the start of the month set me up for an August filled with learning opportunities. 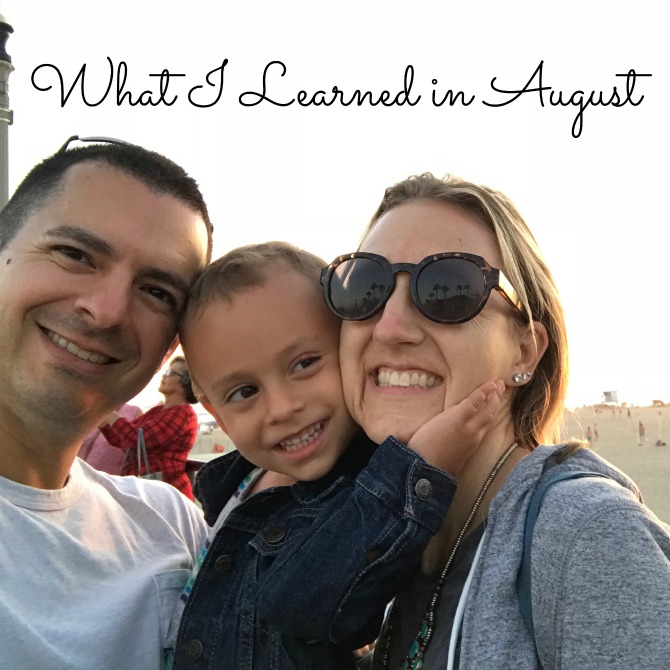 1. Before speaking, I should ask myself:  “is it true? Is it kind? Is it necessary?”

My focus verse this month had me paying special attention to my words, so my ears perked up when I heard a podcaster share this simple litmus test for determining whether or not to speak up in any given situation. I’ll be applying it (or attempting to) in the future when wading into precarious conversational waters.

2. In the South, “rolling a house” means the same thing as TP-ing.

This fun factoid came to me courtesy of this book. I used context clues to determine what the phrase meant when I came across it, but I also looked it up just to be sure. Apparently “yard rolling” and “wrapping” are also common names for this act. I’m fascinated by regional lexicon variations and love stumbling across them in literature.

3. House plants have a lot to teach Luke and me about communication and the division of our responsibilities.

Luke and I like to joke that we have a collective black thumb. Together we have managed to kill every single plant we’ve brought into our home in our ten years together. That includes cacti, succulents, and even a few silk plants. The problem is that we are never clear on whose job it is to keep the plants watered: sometimes both of us water the plants, and we drown them. Other times, neither of us waters (assuming the other has) and they die from dehydration. Before our vacation this month, we both (unbeknownst to the other) watered every single one of our house plants. As expected, a few of the plants thrived with the extra watering, but a few withered during our week away. We are finally acknowledging that we need to set up some guidelines around our plants . . . and around other areas in our life, too. I’m looking at you, child discipline! 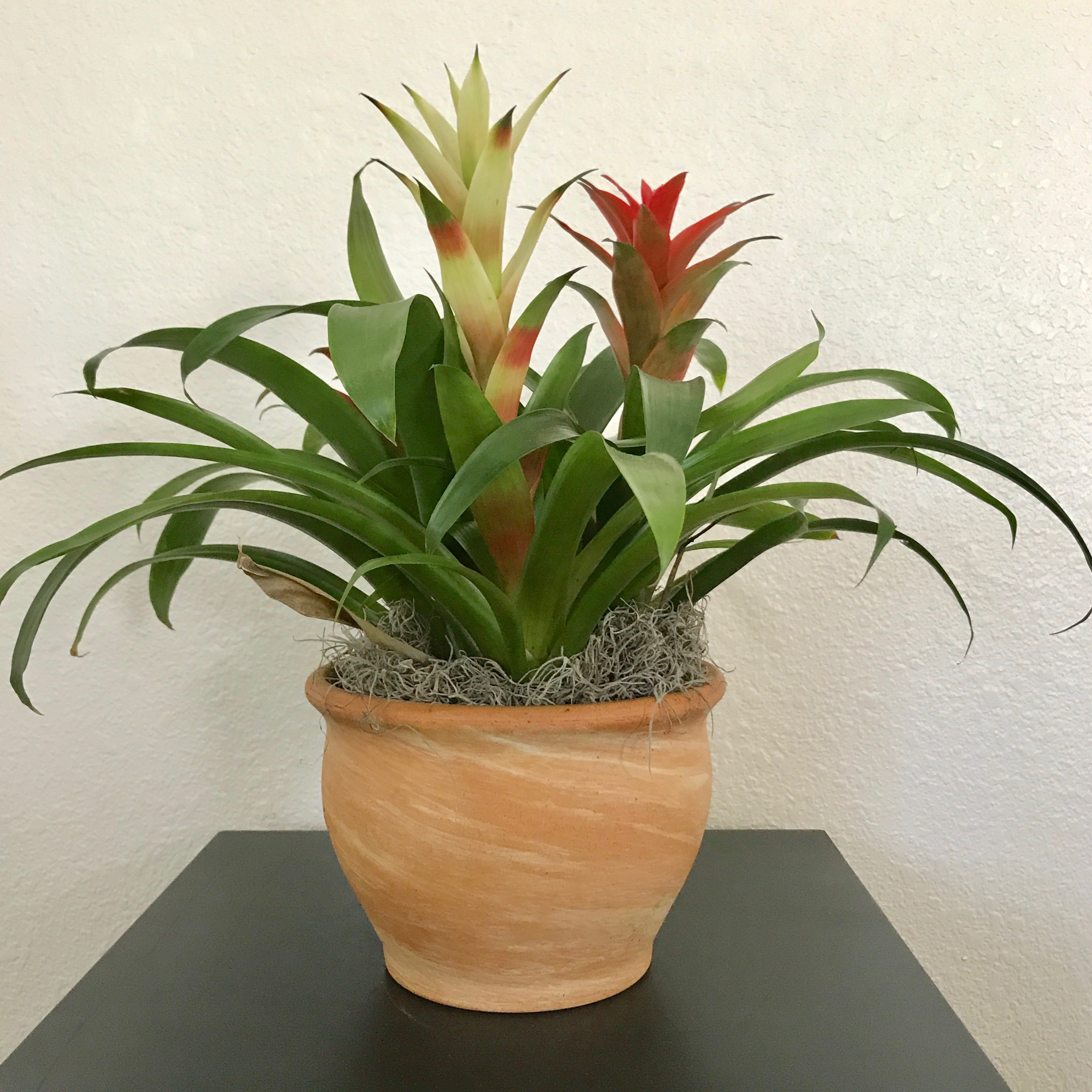 4. “To grow your faith: do what you know how to do and God  will do what only he can do. Do what you can do and then watch what happens in the narrative around you.”

This was my favorite statement to come from my pastor’s mouth this month. It’s a lesson that I explored in this post and that God is continuing to teach me. God doesn’t expect me to act outside of the abilities He’s given me, but I don’t think he wants me to a be an apathetic spectator of my own life. When I take action, while also acknowledging my own limits, it creates space for God to show up in miraculous ways.

5. My opinion of the beach is changing.

I mentioned recently that I have a hard time with change—specifically changes in my own beliefs or perspectives—but that I’m growing more comfortable with acknowledging changes as they occur. One area where this is happening is in my feelings about the beach. Despite having grown up in Southern California, I’ve never been a beach fan: all that sand and breeziness just weren’t for me. However, I think that moving far away from the coast has increased my fondness for what I’m now missing. Every time we return to California, I like the beach just a little more. Having solidified myself as an anti-beach gal, this shift isn’t easy for me to admit, but the heart loves what it loves—and this heart of mine is developing a begrudging affection for that salty sea air. 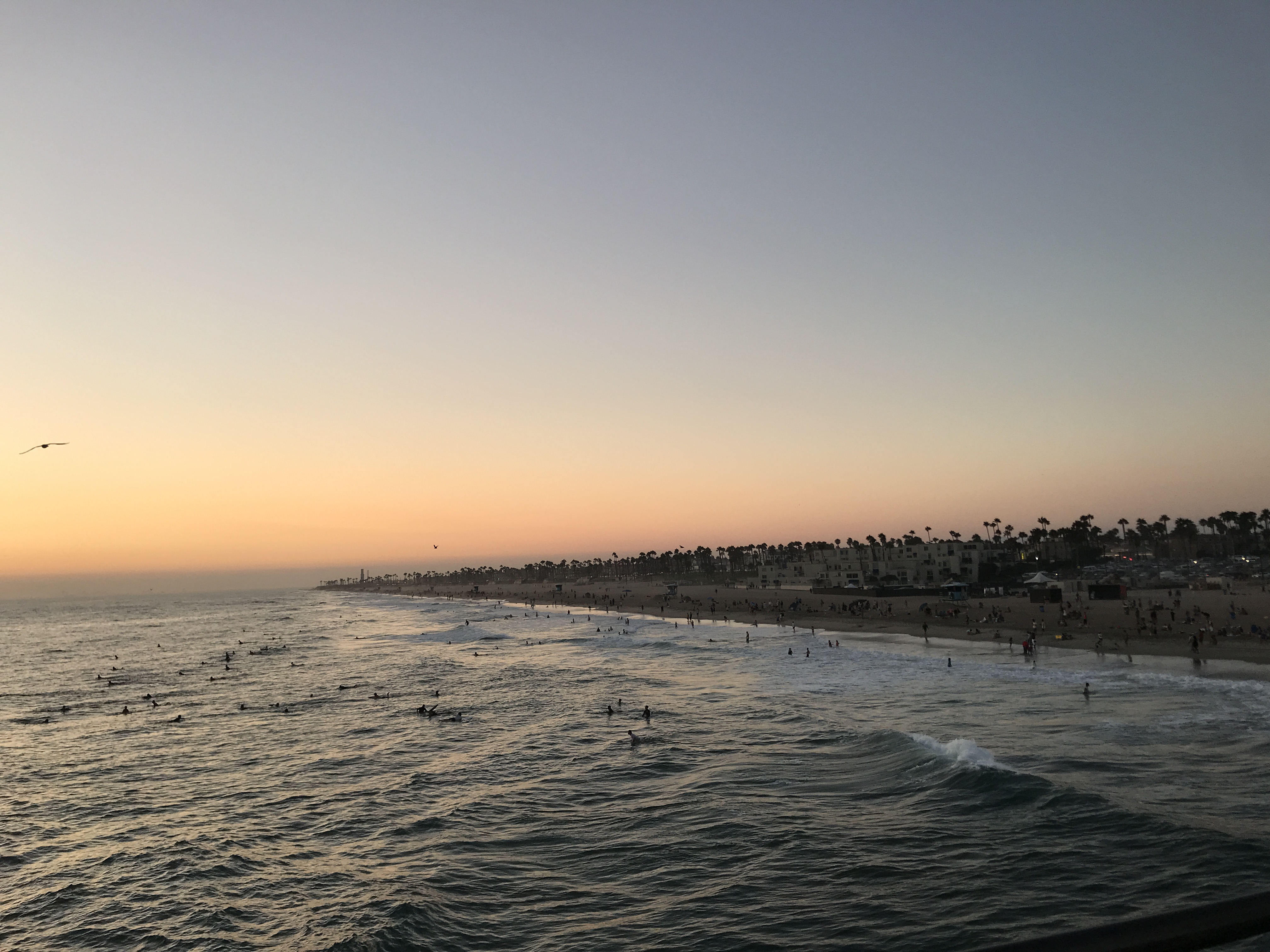 6. Sometimes, changes are not in anyone’s best interest.

While I am becoming better friends with change, I still dislike changes that are made when the status quo is working just fine. Case in point: El Pollo Loco (previously my favorite fast food chicken restaurant) has made quite a few unnecessary changes to its menu since our last visit. It’s our go-to spot on our road trips to California, and we always look forward to picking up a chicken dinner before heading to our hotel after a long day of driving. My standard order is a side salad and skinless chicken breast which, in the past, was a fire-grilled breast with the skin removed. (Because I don’t like the skin, but I also really don’t like having to remove it myself.) Tragically, on our most recent visit I was given the new version of a skinless breast which was not just skinless, but also boneless, undercooked, and unseasoned. I forced myself to finish it because I’d eaten little during our long day in the car, and it was the only food we had in our hotel room; but I felt sick afterwards, and I’m now questioning my loyalty to El Pollo Loco. Demerit to them for changing up a perfectly good thing.

Well, this one is embarrassing, but if I can’t get blog content out of it, the experience has zero redemptive value, so here goes: on the first night of our vacation I went to brush my teeth and discovered that the sample-sized tube of toothpaste I’d packed was awful. I mean, it was truly terrible. Flavor, texture, everything—by far the worst toothpaste I’d ever tried. I had just choked down that disgusting El Pollo Loco chicken (see #6) and was desperate to get its taste out of my mouth, but this toothpaste wasn’t helping. I brushed vigorously, trying to take my mind off the abhorrent flavor and vowing never to return to the dentist who had sent me home with this fowl-tasting sample. Only after I’d spit and rinsed did I look at the toothpaste tube to see what brand it was. It was a new brand, one I hadn’t heard of, called Benadryl. Wait, did I just brush my teeth with Benadryl? It was a sickening revelation. Thankfully I hadn’t swallowed any of the “toothpaste” and didn’t actually get sick (at least not more sick than that chicken had made me feel). I was also VERY relieved to discover that Luke had packed his own toothpaste (real toothpaste, and not a tube of itch cream masquerading as such). My heartfelt apologies for my dentist for the awful things I thought about you while de-itching my teeth! From now on, I’ll be storing my various travel-sized creams and pastes in different containers beneath the sink. I’ll also be entrusting the packing of the toothpaste to my husband from now on.

8. The Lion King is based on Hamlet.

I grew up watching The Lion King but somehow I had no clue that it was inspired by Shakespeare until a friend (an acting major) mentioned it this month. To be fair to myself, I’ve never actually seen or read Hamlet. But it seems like a pretty big aspect of this beloved Disney film to have missed!

9a. The Nordstrom Anniversary Sale isn’t for me.

The internet goes crazy for this sale every year, and this year I did too. I don’t have a Nordstrom card so I loaded up my wishlist with all my favorite sale items, ready to press “purchase” when the sale opened up to the public. Unfortunately, by the time I was granted permission to shop, all of my favorites had sold out. The few items I did buy didn’t work out for me and I ended up sending them back. I realize now that they weren’t items I would normally have wanted anyways, but the allure of the sale prices drew me in. Next year I think I’ll be skipping the sale; it was too much stress without any payoff.

9b. Also not for me: high waisted anything.

The bummer items I did purchase (and returned) from the Nordstrom sale were high-waisted jeans and leggings. It’s a trend that’s showing up everywhere these days so I thought I’d give it a try. But his short-torsoed gal doesn’t need waistlines that are hiked up over my rib cage. Can we please go back to the low-waist trend? (By the way, I’m fine with my low waistlines not being on trend, but I do need to be able to find them in stores, and that’s growing impossible.)

I’ve been seeing the name Nina pop up everywhere these days: in three books I read in the last month alone, and also in two television shows and a movie. I realized that I don’t know a single Nina in real life and thought it might just be the circles I am in. But being the name nerd that I am, I looked up the Social Security name data on Nina and sure enough, it’s far from popular. It only ranked at #322 last year for girls (with just 1,009 girls in the US given the name), and even at its most popular it never dipped below #150. It’s interesting how certain names gain traction in fiction but don’t translate to real-world popularity. 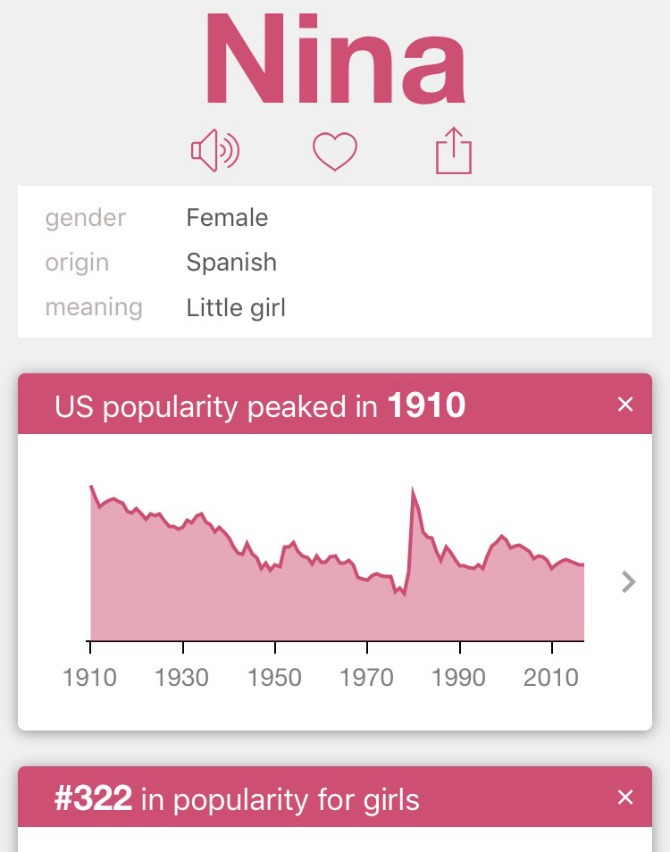 11. It can take a few tries to identify the “sugar” that helps the medicine go down.

Charleston has been fighting some stubborn styes on his left eye for a couple of months now, and the doctor wants us to do four sessions with a hot compress and massage each day. If you’ve spent any time with a 3-year-old, you’ll recognize what a daunting task this is. We tried numerous incentives but each session was met with tears and tantrums and defiance—until we discovered the magic that is Daniel Tiger videos on the PBS Kids app. Now Charleston looks forward to the compress because it means he’ll get a few minutes of screen time (which he doesn’t get the rest of the day). This revelation has proven true with Arlo as well: Daniel Tiger doesn’t work in getting him to take his pills (he has had a LOT of pills in short life); neither do hot dogs or rotisserie chicken skin. But shredded cheese, rolled into a ball with the pill wedged inside, does the trick.

12. Back-to-school in August is the worst . . . except when you aren’t going back to school, and then it’s fantastic!

In my mind, school shouldn’t start back up until after Labor Day. It feels wrong to me that the kids here in Austin have been back in school for weeks now. I feel for them, but as a SAHM to a kid who isn’t in school, the schedule is great! With everyone else hitting the books, we have the pools and splash pads and library all to ourselves! 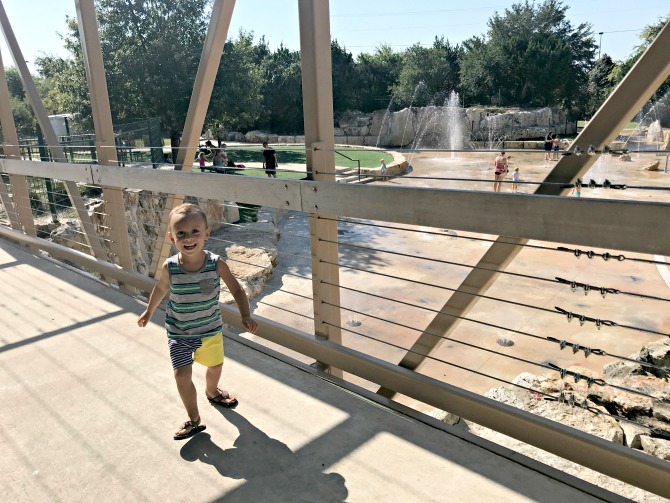 I’m linking up with Emily P. Freeman, who is the inspiration for these monthly lists of what I’ve learned. If you’re stopping by from the linkup, I’m glad you’re here! I was careful not to include any pictures of my bare feet just for you!

What is something you learned this month?