At the beginning of the year, I chose the word “Open” to be my Word of 2015. My hope was that this word would remind me to be more open and flexible in the coming year. At the time, I had no idea how applicable this word would be in my son’s birth story! 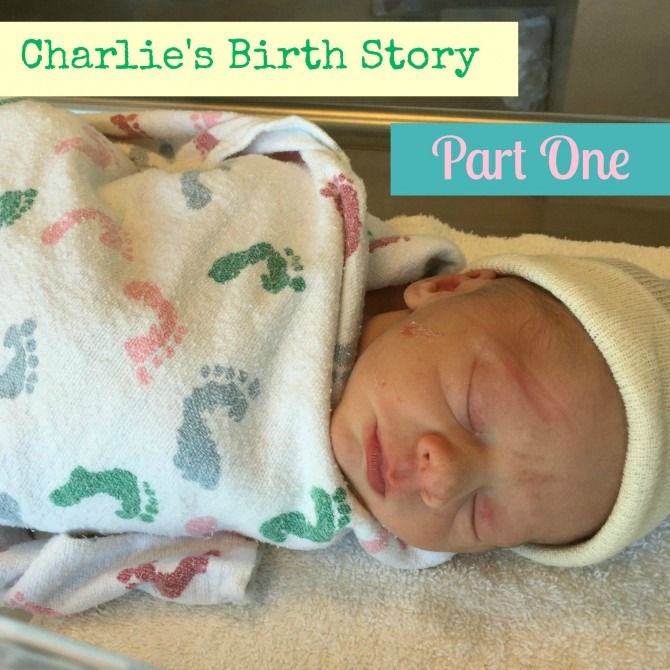 Charlie was born on the morning of Friday, January 16, but his birth story actually began months earlier. Long before I was even pregnant, I knew that if and when I had a baby, I wanted to have a natural birth, preferably with a midwife and outside of a hospital. Ultimately, a healthy baby is the most important outcome of labor and delivery, but having a positive birth experience was also important to me, and I strongly felt that a birth center would be the best place for that to happen.

When I first got pregnant, it was easiest to see the obstetrician referred to me by my primary doctor, but at the end of my first trimester, after weighing our various options, we transferred my prenatal care to a midwife-run birthing center that embraces a holistic approach to pregnancy and labor. Luke and I both loved the warm, personalized care we received at our regular check-ups at the midwifery. Over the course of my pregnancy, we took full advantage of the center’s classes and resources, and we couldn’t wait to give birth to our little boy in the center’s gorgeous birthing suite.

Despite having a nausea-ridden first trimester, and experiencing typical pregnancy-related aches and pains as my due date approached, I had a healthy and uneventful pregnancy. I was measuring small, but because Luke and I are both pretty small people, the midwives assured us that it was normal to have a small baby, and an ultrasound a week before I gave birth showed that everything was fine. However, at my appointment the Monday before Charlie was born, my weight and fundal height measurement showed no increase from my appointment two weeks prior, which indicated that Charlie might have stopped growing. The midwife ordered a diagnostic ultrasound, but we couldn’t get an appointment until the next week. None of us expected that during that week, Charlie would decide he wanted to meet us!

On Wednesday, the day before I went into labor, I felt an overwhelming urge to GET THINGS DONE. Charlie’s due date wasn’t for another three weeks, but I spent the day trying to check off as much of my to-do list as I could: I finished packing my birth center bag, organized the items I’d received at my baby showers the week before, and even went shopping for nursing bras. I think that subliminally my body knew that it was about to go into labor, and it was urging me to speed up the preparation process! When I went to bed that night, I was experiencing fairly constant Braxton Hicks contractions, but I’d been having those for weeks, so I didn’t think it was anything new. Shortly before I went to bed, I wrote this entry in my Day One journal:

Around midnight, shortly after we’d gone to bed, I woke up to go to the bathroom and experienced some abdominal pressure and back pain. I brushed it off, but when the pain woke me up an hour later, and continued to wake me periodically, I began to wonder if I was in labor. I knew that if I WAS going into labor, I should try to sleep because I would need my energy for what was ahead, but soon the waves of pain—what I was slowly allowing myself to accept were contractions—were so regular that I wasn’t sleeping at all. When our alarms went off at 5:00, I looked over at Luke and told him, “I think I’m in labor. We should probably skip our walk this morning.” He immediately sat up, looked at me excitedly, and said, “Well, let’s get up and see what happens!”

In our birthing classes, our coach told us to make a list of things to do when labor began, so I pulled out my list and began tackling the items on it. While Luke started charging the camera and packing up our last-minute bag with snacks and other necessities, I got a load of laundry going and began cleaning my bird’s cage. My contractions were becoming more regular, though, so every couple of minutes I had to stop what I was doing to endure the contraction. I tried the various positions we’d learned in our class—bending over a couch, getting down on all fours, walking—but the only position that really seemed to ease the pain was curling up on my bed (or the floor) with my body pillow. Luke tried to coach me through the contractions, but I was having a really hard time relaxing; I think I was mostly still in shock that I’d gone into labor so early.

I knew I needed to eat something, so I had some yogurt and coconut water, but immediately vomited them up. We were timing my contractions, and they were already about three minutes apart, so Luke called our doula, Kimberly, to let her know I was officially in labor, and Kimberly told him he needed to call the birth center. Luke consulted with the midwife on call, who told us to keep her posted, but to continue to labor at home until my contractions were stronger and closer together.

At just before 9:00, I decided that we should probably head to the birth center. Things seemed to be progressing pretty quickly, and since the birth center is almost thirty miles from our home, I wanted to make sure we got there in plenty of time. As we were walking out the door, I remembered that I had wanted to hang the banner my mother-in-law had made for my baby shower before we brought Charlie home, so I waited at the door while Luke hung the sign. Then we were on our way. It was so surreal to leave our home, knowing that we would return with a baby! 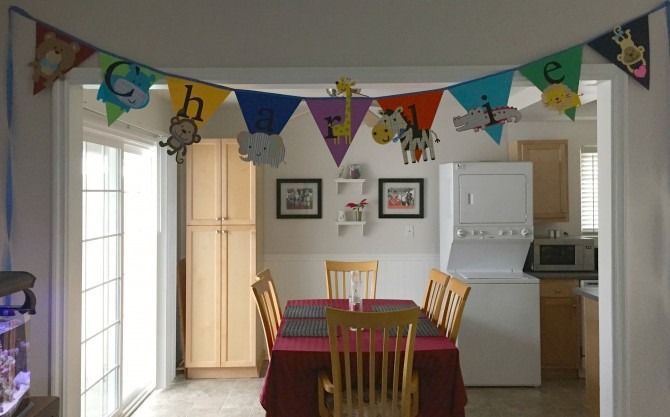 We showed up at the birth center at around 9:30 and hauled our assortment of gear inside with us, thinking we would immediately be admitted and moved into a birthing suite. I felt pretty foolish when our midwife, Nancy, met us in the waiting room and said she needed to do a cervical check on me first to make sure I was at 5 centimeters. I couldn’t believe it when she told me that I was only at 3 centimeters! I felt like my contractions were already so strong, I had no idea how I would make it 7 more centimeters! Nancy swept my membranes to try to get things moving. Then, since they couldn’t check me in yet, and we didn’t want to drive all the way back home, Nancy recommended that Luke and Kimberly (who had met us at the birth center) walk around with me outside. All I really wanted to do was stay on that couch and hug my body pillow, but I allowed them to help me up and we made our way to the picnic table outside the center.

Outside, Kimberly kept me talking to keep me distracted between contractions. We tried walking around a bit, but with frequent stops for contractions and to throw up, we didn’t make much progress. The birth center is in a shopping center, surrounded by banks and other businesses, and there were businesspeople walking around. We must have looked like such a sight: a pregnant woman wandering around clutching her body pillow and pausing every minute to bend over in pain, and another woman and a man walking behind her massaging her back and modeling guttural breathing. (I needed those constant reminders to breathe deeply.) At one point, an older lady walked by and seemed very concerned. She asked if we needed anything, if she could get us a ride somewhere, and the look on her face when I told her it was fine, I was just in labor, was pretty priceless.

After an hour or so outside, Nancy had us come back in to check me again, and I was shocked and disappointed to hear that I hadn’t progressed any further. (Looking back, I believe my apprehension about Charlie’s size, and my disbelief about his coming early, were inadvertently causing me to resist labor. I wasn’t able to give into the contractions—and to let labor progress—because I simply wasn’t mentally ready to be in labor.) Nancy said that since my labor seemed to be stalled, perhaps this wasn’t actually labor and I was just dehydrated, so she hooked me up to an IV and gave me two bags of fluids. That gave me a bit more energy, but the intensity of my contractions wasn’t lessening and I was still vomiting. I was also shaking uncontrollably, probably from the cold fluids streaming through me.

Up until this point, things were moving more slowly than I had expected, but otherwise I thought everything was progressing pretty normally. However, things changed when the head midwife, Lorri, came in to see how things were going. Apparently the midwives like to place bets on how big the babies are going to be, and when Lorri measured me she was very concerned by Charlie’s size. Since my labor had stagnated (dilation, not contractions), and we seemed to have nothing but time, Lorri and Nancy recommended that we drive to the nearby hospital to meet with their overseeing obstetrician. He would be able to do an ultrasound that would determine whether or not Charlie was big enough to be delivered away from the hospital. I was not at all eager to leave the birth center, but I didn’t have any other options, so Luke and I packed up our bags and headed to Hoag Hospital, hoping for a reassuring ultrasound and a quick return to the midwifery.

Since this post is getting really long, I’m splitting it into two. Stay tuned for the (happy!) conclusion to Charlie’s birth story!