I recently listened to a podcast interview with Dan Lerner, a psychologist and strengths-based performance coach who teaches a popular course at NYU called Science of Happiness. In the interview, Lerner mentioned that knowing and utilizing our strengths is a key component to happiness. Lerner recommended a specific test  for identifying your strengths, and I (always eager to check out a new personality test) immediately headed to take it.

Surprise, surprise! According to my test results, my number one strength is “Love of Learning” (described as “Mastering new skills, topics, and bodies of knowledge, whether on one’s own or formally.”) Given that Learning is a key component of my personality, it’s no wonder that I love this monthly practice of taking stock of what I’ve been learning and compiling it into a shareable list.

I’ve been doing these lists for a few years, and as you’ve probably noticed by now, some months’  lists are more lighthearted, dominated by bits of trivia I’ve picked up, life hacks I’ve discovered, or obscure connections that have made their way to my brain. Other months are more introspective, taking a reflective turn as my mind (and therefore my writing) becomes more tuned in to what’s going on inside of me. This month’s list is a fairly even mix of all of the above. 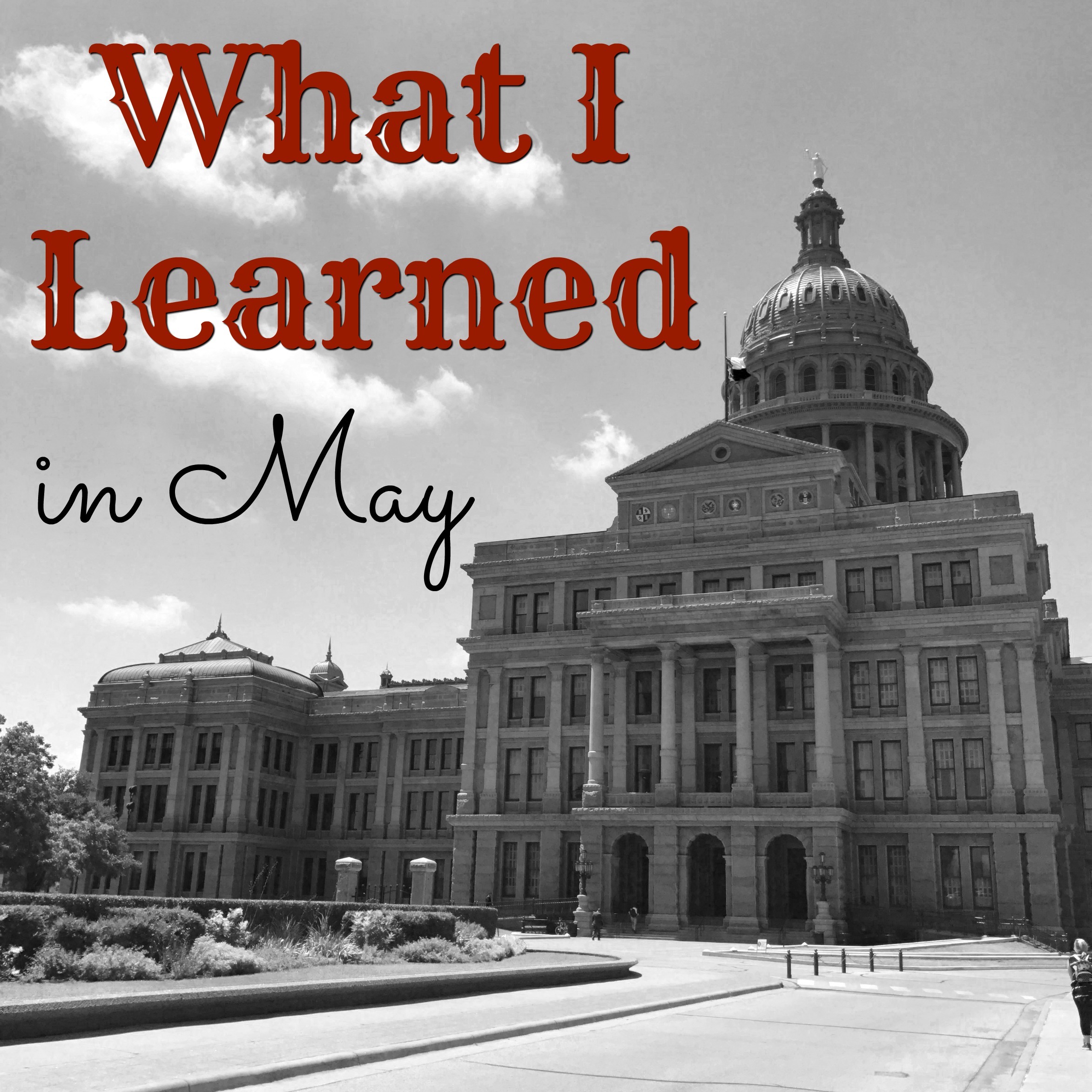 1. In the state of Texas, dentists are required by law to take your blood pressure prior to a check-up or routine cleaning.

I should have learned this fact at least six months ago, but it took me more than a year after moving to Texas to find a dentist and book a cleaning. Better late than never, I suppose. Good news is that my teeth (and my blood pressure) all looked great. I’ve never gone so long between cleanings, so this was quite a relief!

2. Making room for spontaneity can lead to positive opportunities.

I am and probably always will be a planner; I hate changes, surprises, or unpredictability of any sort. But I realize that the rest of the world doesn’t operate on my own schedule. Lately I’ve been experimenting with planned spontaneity, leaving days open in our calendar so that we’re free for playdates, meet-ups, or other invites that might come up. As a result we’ve had some great experiences and informal interactions that less-flexible me would never have gotten to enjoy. It’s a baby step for me, but I think it has me headed in a very good (less uptight) direction.

I’d been hearing a lot of buzz around what I thought were two similarly named shows. It was only when I started watching The Great British Baking Show on Netflix this month that I did some sleuthing and learned they are one and the same. Apparently The Great British Bake Off is the original, British, title of the show. It goes by a different name here because Pillsbury owns the Bake-Off trademark in the US. 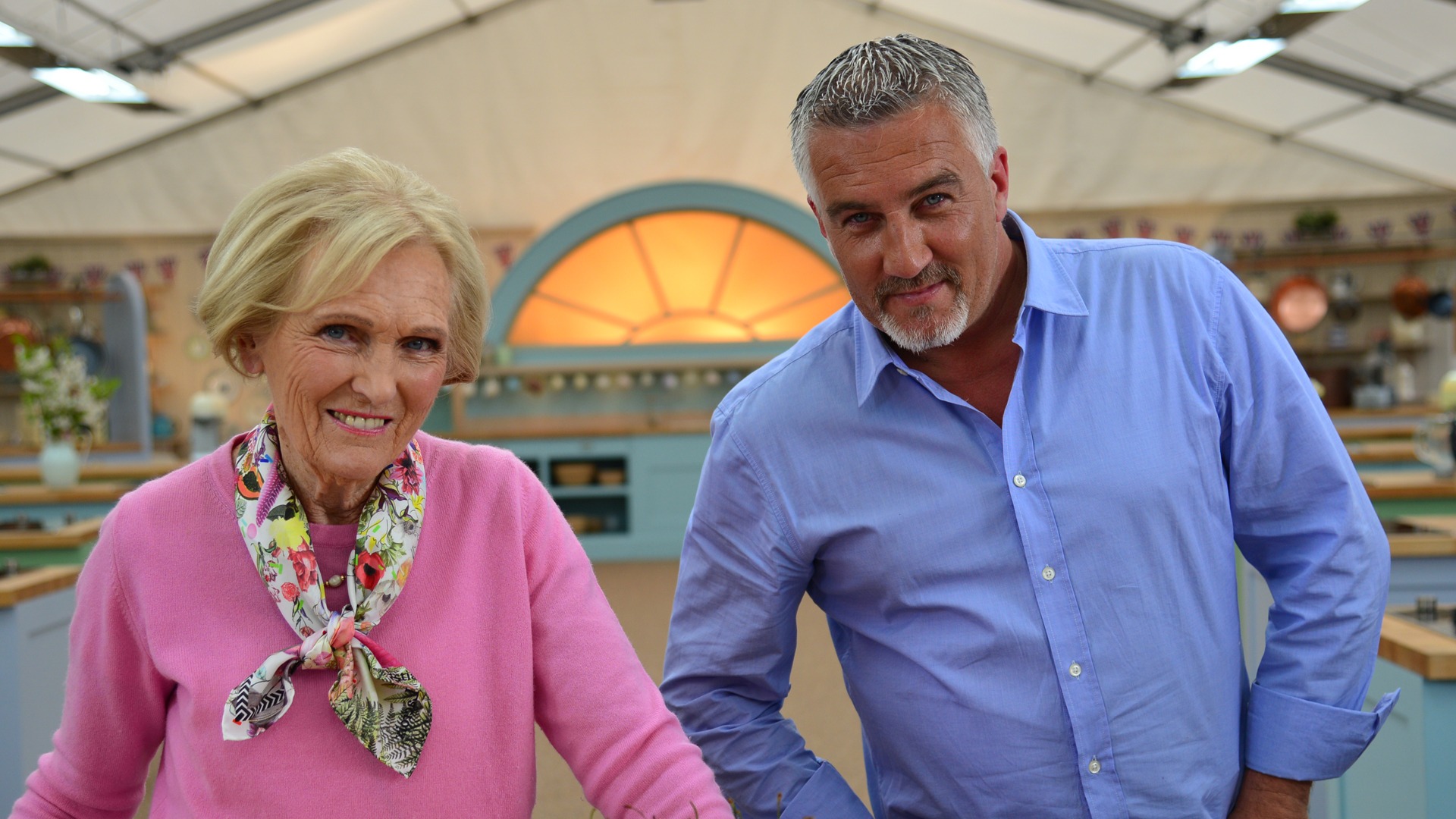 4. I can live without my phone …. but it’s harder than I thought.

After one too many collisions with our kitchen floor, my phone died this month and I had to go without it for nearly 24 hours. I survived, but just barely. It was embarrassing to realize how dependent I am on my phone for everything from checking the time to taking pictures, and even as my flashlight in the middle of the night—not to mention needless scrolling on social media at random points during the day. It felt especially weird to drive around town without access to a phone, and I had to remind myself that for many decades, civilization did not end when people operated their vehicles without GPS or immediate 911 access.

5. A trip to the Apple Store doesn’t have to be a horrible experience.

Sadly, this wasn’t the first time I had a phone die a premature death. In the past, I’ve immediately rushed to the nearest Apple store—and then waited, up to an entire day, for help from the Geniuses. This time my very level-headed husband scheduled an appointment and even revived my phone long enough to do a full back up to my computer, which meant that I didn’t have to wait for an appointment or a phone inspection when I got to the store. The very kind Genius who helped me simply replaced my phone without wasting time trying to identify a nonexistent software problem. The whole experience was night-and-day from my previous emergency Apple store visits, and I left very relieved to be reunited with a working phone.

6. I have not been maximizing the potential of the Kindle app.

Given that I do nearly all of my reading with this app, one would think I’d have spent a decent amount of time exploring its many features. Not the case. I’ve always been annoyed that my Kindle Library cloud still showed the titles of books I’d borrowed from the library but could no longer access. I finally figured out how to delete these titles (by gong to the “Manage Your Content and Devices” page on the Amazon website). I also discovered how to organize the remaining books into collections. I created collections for books I’ve already read, books that I want to read, and books that I read before but will want to return to for reference purposes. I’ll probably create more collections in the future, but just this basic organization has done wonders for countering the overwhelm I used to experience each time I opened up my Library. (By the way, these collections are for books in my Cloud. The only books I keep downloaded to my phone are those I’m currently reading.) 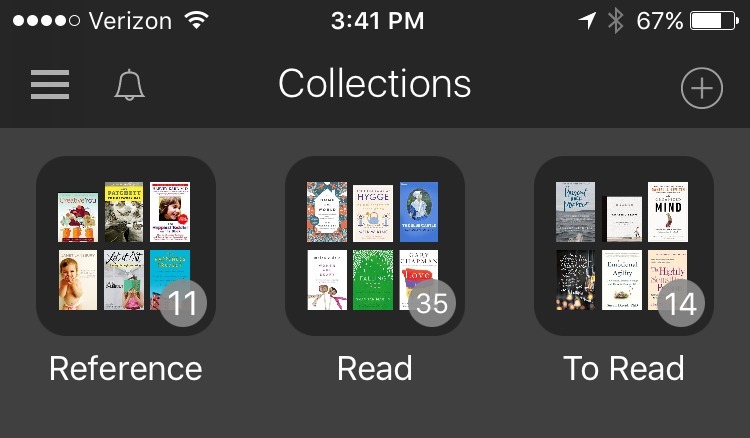 7. One of my greatest pet peeves is when things (and people) don’t work/look/act like they “should.”

I talked more about this in Monday’s post when I shared my (entitled) annoyance over our dishwasher breaking and my toddler not being able to watch television for an “appropriate” amount of time. This pet peeve spills into nearly every aspect of my life, and I’m realizing that it’s a part of my Perfectionism (I’m sure my fellow Enneagram 1’s can relate). I don’t like this component of my personality and wish I could let go of all the “shoulds” so that the things that I perceive as imperfections would bother me less.

8. I don’t have a time problem, I have an energy problem.

I regularly cite “not having enough time” as my reason for not accomplishing more of the things I would like to do. It’s not an accurate excuse, though. We all have pockets of time in our lives that are being wasted on superfluous activities. I’m realizing that I’m not utilizing those time slots because I just don’t have the energy or the drive. If you have a solution that will help me jumpstart my energy levels, please send it my way!

9. I’m either not interested in something, or I’m obsessed with it.

I spotted this quote on Pinterest and it resonated immediately. I have a hard time understanding the mentality of having a passive interest in something: I either embrace an interest wholeheartedly or it’s barely a blip on my radar. 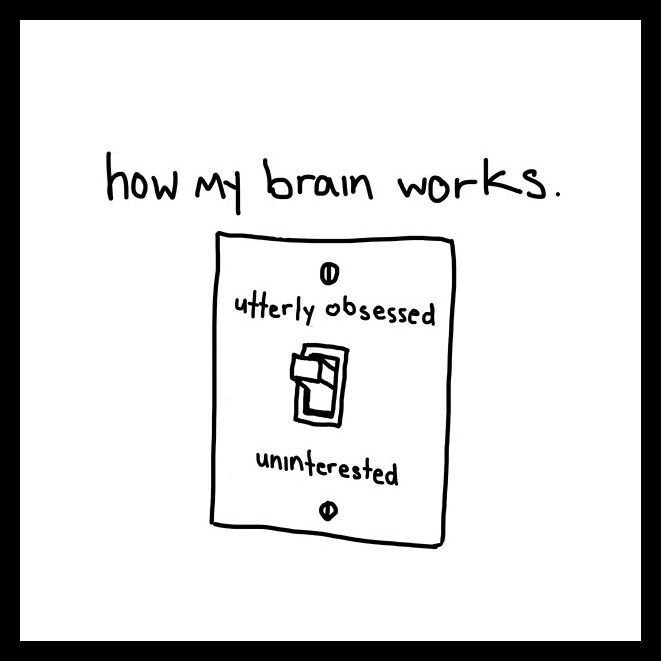 10. The opposite of boredom is not entertainment, it’s engagement.

This insight came from our pastor, and I think it’s perfect. I don’t get bored often, but it’s a good reminder for those times when I do: the solution isn’t to look for something new to entertain me, it’s simply to engage with what’s already in front of me. I intuitively practice this with Charleston and am glad that I now have words to describe something I already do.

11. Ceylon tea isn’t a flavor; the Ceylon label refers to the place where the tea was grown.

One of the employees at my favorite restaurant told me she is from Sri Lanka, and her stories inspired me to do some of my own research on the country. I learned that Ceylon was the formal name for Sri Lanka until 1972, and that the island nation is the world’s fourth largest producer of tea. Any tea that comes from Sri Lanka can be called Ceylon tea, and though many mistake Ceylon tea for regular black tea, it can be white, green, or black. Ceylon tea brings a revenue of $1.5 billion to Sri Lanka each year.

I anticipate the annual release of new baby name data like a kid counting down the days until Christmas morning. This year’s data was a bit of a letdown, with very few changes from 2015. Emma has been the most popular girl name for three years in a row, and this is Noah’s fourth year as the top name for boys. But if alternate spellings were being taken into consideration, these statistics would be quite different; I love Nameberry’s annual Playground analysis which lists the “real” top fifty names based on combined spellings. According to those statistics, Sophia and Jackson hold the top spots. 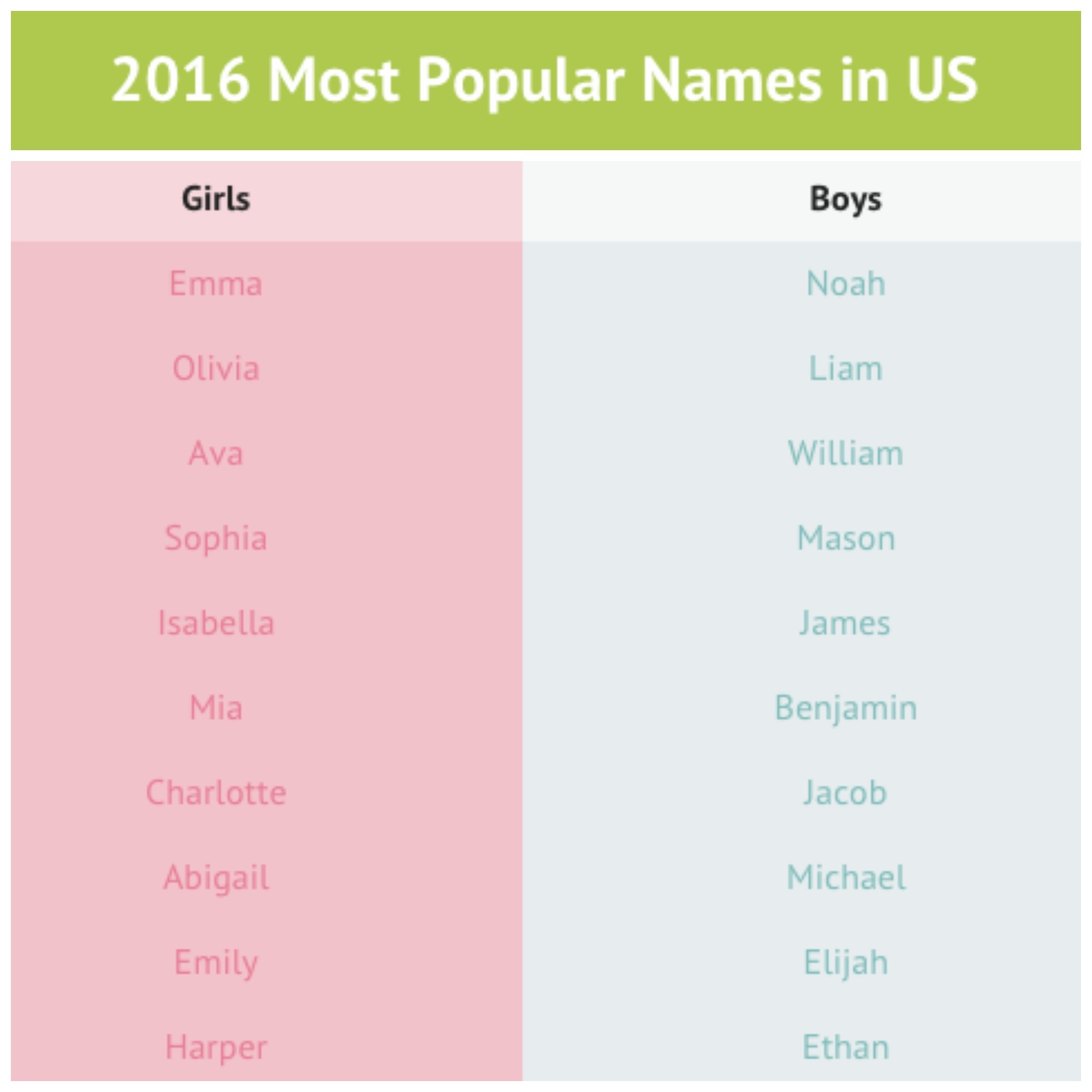 I came across this line in a book I’m reading and it’s stuck with me. In the book, the sentence is describing a former renowned author who is experiencing writer’s block, something I’ve personally been struggling with a lot lately. I wish that I could will my posts to write themselves, but it hasn’t been happening. Sometimes the words just won’t come. It’s comforting to remember that other writers (at least fictional ones) experience the same dilemma.

14. The world will not end if I skip a scheduled blog post.

As a result of this block, I’ve been posting less frequently. Maybe you’ve noticed, or maybe you haven’t. My perfectionist self is convinced that a skipped post is the end of the world, or at least the end of my blogging career. But this month has seen a few Wednesdays when a post didn’t go up. The sun still rose, I’m still here, and apparently I’m still writing. I experienced a bit of discomfort, but I’m reminding myself that the only person I let down was me, and I let myself down in other areas all the time. I don’t like it, but it’s not a tragedy either.

15. Mother’s Day is way better than my birthday.

I’m not the biggest fan of my birthday because I don’t like being in the spotlight, and I really don’t like to think about getting older. But Mother’s Day involves all the good parts of a birthday (extra love, cards, gifts) AND I get to share the spotlight with millions of other women. This year my boys did a great job spoiling me on Mother’s Day (check out my gorgeous gift in the pic below), but the best part of the day was knowing that I am part of such an incredible tribe. 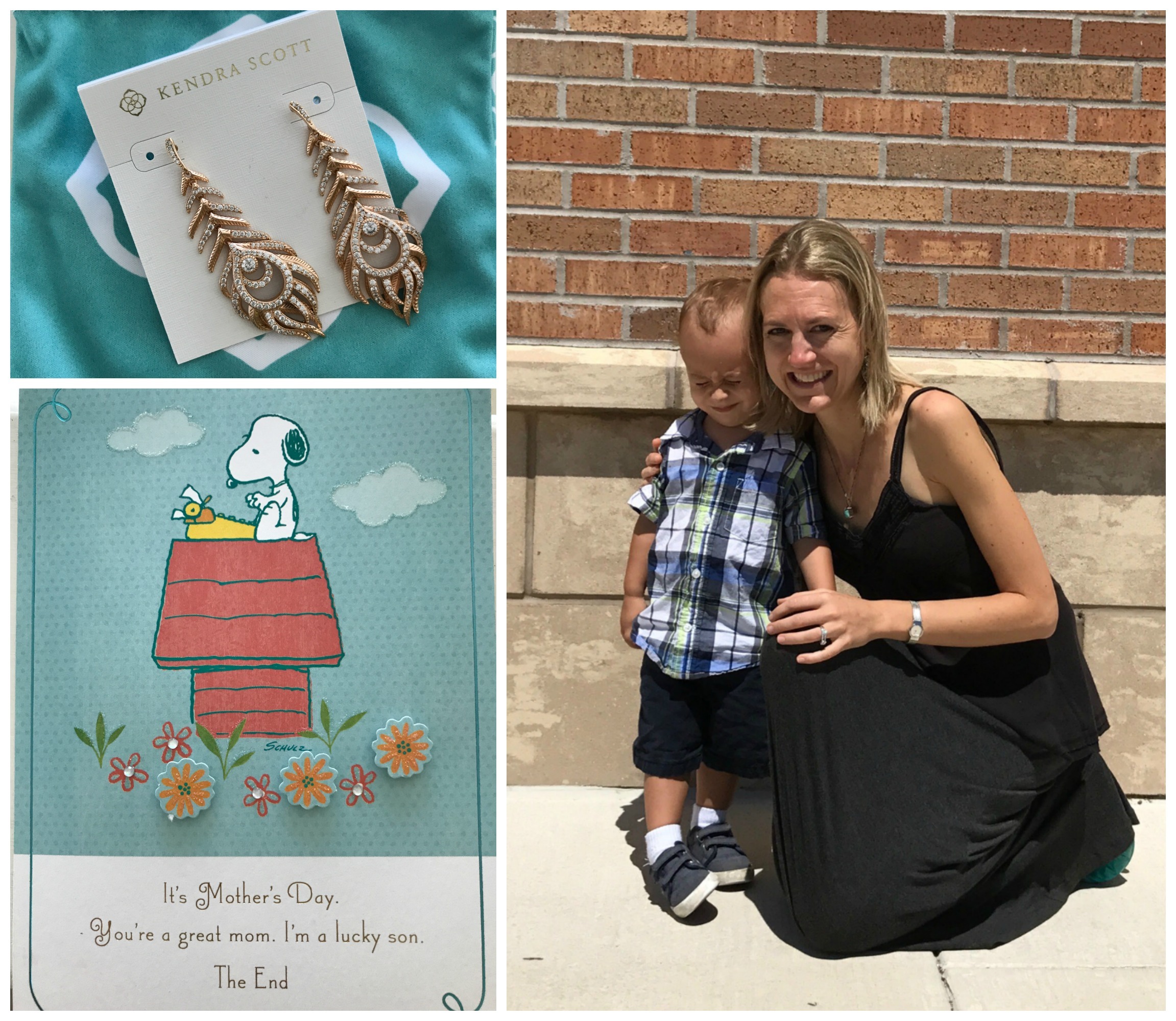 Looking back at my list, I see that I was wrong: this month’s learning was not a mixed bag at all, but very heavy on the reflective side of things. Thanks for indulging all my introspection! If you’d like to read more lists just like this (though probably much more interesting) head to Emily Freeman’s seasonal What We’re Learning linkup. The idea for compiling a monthly list of what I’ve been learning originated with Emily and her amazing blog, and I am honored to be a part of the reflective community linking up there at the end of each season.