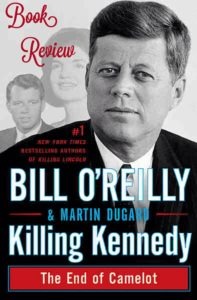 September 11, 2001. It is a date that will forever be ingrained in the memories of everyone who lived through that catastrophic day. For Americans who have been alive a bit longer than me, there is a second date that will never be forgotten: November 22, 1963, the day President Kennedy was assassinated. It is this day that is the focal point of Bill O’Reilly’s best-selling book Killing Kennedy.

Prior to reading this book, most of my knowledge of Kennedy’s assassination came from Stephen King’s 11/22/63 – AWESOME book, but not exactly a comprehensive source of information about this historic event. Killing Kennedy served to round out my education, filling me in on the details of Kennedy’s death as well as his life.

O’Reilly’s biography includes a brief summary of Kennedy’s childhood and military years, but a majority of the book focuses on Kennedy’s years in office. Interspersed with the narration of these White House happenings are glimpses into the life of Lee Harvey Oswald. These vignettes, combined with frequent phrases foreshadowing Kennedy’s ultimate demise, lend an ominous tone to the narration, constantly driving the story toward its tragic climax.

If O’Reilly’s intended purpose in writing this book was to inform the reader of Kennedy’s presidency, he succeeded: I came away from the book with a much deeper understanding of our 35th president and his time in office.  I was sufficiently appalled by Kennedy’s philandering and impressed by how much he grew as a leader in just three years.  However, for a novel titled “Killing Kennedy” there is a surprising dearth of information about Kennedy’s actual assassination. The theory of Oswald acting as a lone assassin is presented as fact, with very little discussion of other possible theories or even of Oswald’s motives. More information on this front would have substantially improved the book.  In spite of these glaring omissions, I found Killing Kennedy to be both entertaining and educational.