I think I begin nearly every one of these updates by talking about how quickly the month has flown, and how I can’t believe another four weeks have slipped by without my noticing. This January was the opposite: it felt like it stretched on forever! We packed so much into a single month that it feels like we should be at least halfway through March, and yet we’ve barely made a dent in this new year! (No complaints here, I rather like this shift in perception and wouldn’t mind if it stuck around.) Our January started off with some travel, followed by some birthday celebrations and then a few weeks of settling into 2017 and all that daily life entails: church, community group, Bible study, play dates, library story time, and plenty of housework and errands to keep my days full. Here’s a look at some of the most noteworthy elements of this past month. 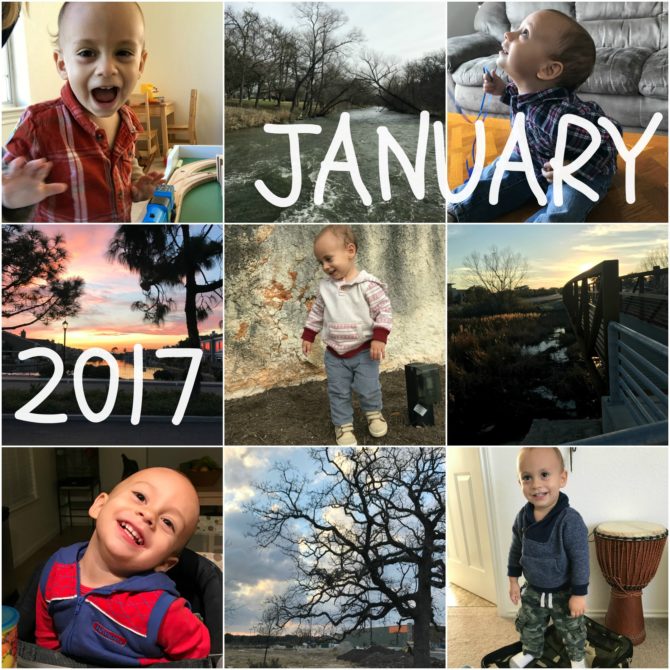 I unintentionally kicked off the year with three books offering different takes on the theme of self care. In The Best Yes, Lysa TerKeurst offers advice for how to say no to life’s nonessentials in order to say YES! to God’s best for us. The Fringe Hours, by Jessica Turner, proved to be a great companion book to The Best Yes in that it demonstrated how we can make time for those things we’ve chosen to say yes to. I followed up these two books with Gift from the Sea, in which Anne Morrow Lindbergh offers her own thoughts on similar topics, with the twist that the book was written in 1955; it seems the topic of too-full lives and too little time is not a new one! 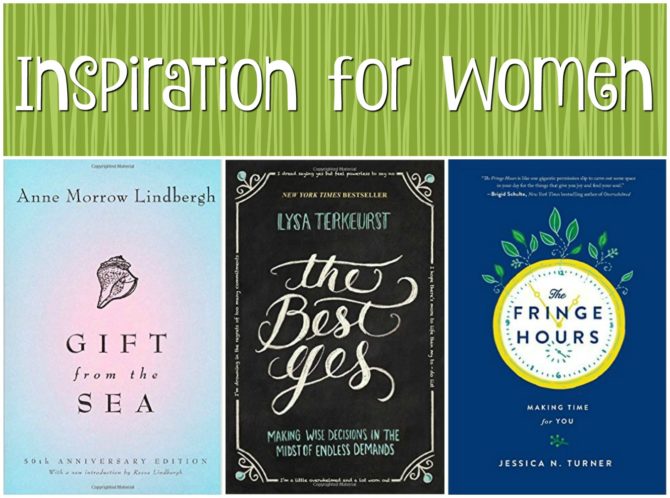 On the fiction front, I read two books—The Nix and Dark Matter—that garnered quite a bit of attention in 2016. I loved one and really didn’t like the other . . . but you’ll have to wait until my next Reading Wrap-Up to find out which is which! I’m currently reading The Girl You Left Behind; I haven’t had much luck with Jojo Moyes’ books in the past, but the historical fiction aspect to this book seemed much different from her usual fare, so I thought I’d give it a chance. I’m less than half way through the book right now, so the verdict’s still out on whether or not this book has managed to redeem Jojo Moyes for me. 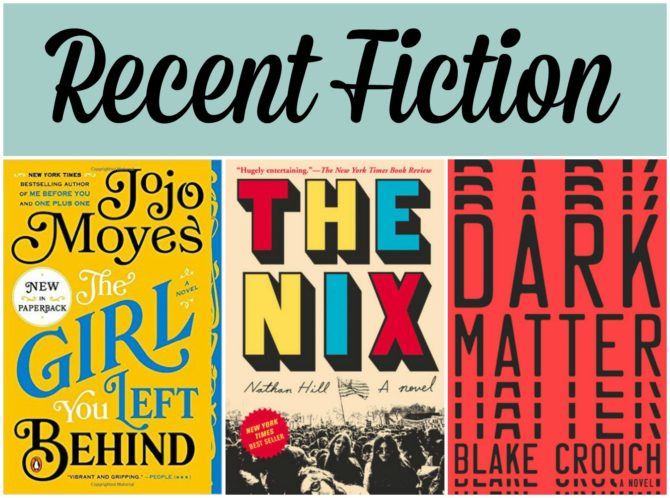 How I Met Your Mother (Seasons 1-9): I’m not sure when Luke and I first binge watched the first several seasons of How I Met Your Mother, but it was several years before the series concluded. It became an instant favorite of ours: though raunchier than many of our other shows, we enjoy the characters, the creative storytelling, and even the off-color humor. For several years, the Netflix release of each new season would find us rewatching the entire series from start to finish—we’re not into a lot of shows, but when we love a show, we love it well!

It had been nearly three years since our last HIMYM binge, so this past fall we decided a rewatch was in order. At the pace of just a show or two per night, it took a few months to make it through, but we finally finished! This time through was our first time watching the whole series while knowing what the outcome would be, and it definitely led me to view the show differently. I was able to appreciate some of the plot choices in a new way, and though I still don’t love the show’s conclusion from an emotional or character standpoint, looking at the overall story through a broader lens allowed me to see the poetic/artistic genius behind the series finale. The final season is my least favorite due to the uneven pacing but I do love that it doesn’t leave off with any loose ends. And even at its worst, the show is still the perfect blend of heartwarming and hilarious. My Rating: 5 stars.

Fuller House (Season 2): I wasn’t allowed to watch Full House when it was on the air, so I was surprised by how much I loved the first season of this spin-off. Even without the nostalgia factor, I found it fun and very entertaining and was excited to see Season 2 being released so quickly. This season got to a bit of a rocky start (a little too cheesy, weak storylines) but finished strong. I especially loved the Halloween and Christmas episodes, which were creative and incredibly touching. A bonus is that I love the outfits they wear on this show, which makes it super easy on the eyes. And I admit I have a bit of a girl crush on Candace Cameron Bure, who totally makes this show a keeper. I’m already looking forward to Season 3! My Rating: 4 stars.

The Jungle Book: I love all things Disney and, like most kids, grew up on the animated classics, but The Jungle Book was never a favorite—in fact, I don’t know that I’ve even seen the full movie. If I had, I think I would have enjoyed/appreciated this latest version much more. It is incredibly well done: the visual effects are amazing, the scenery is gorgeous, the voice actors are a perfect fit; but I found the story pretty dull, even for a movie geared towards kids. My Rating: 3.5 stars. 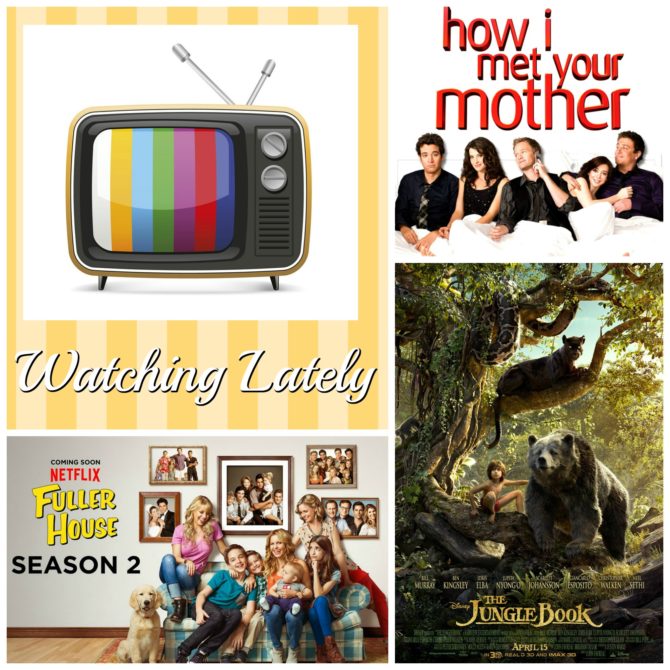 To help me stay focused on my word for the year, I’ve committed to doing one thing each month to spread love in a new or unique way. This month I shared my love with some of my favorite podcasters by writing positive reviews for their shows on iTunes. As you know, I love podcasts and knew this would be the best way to show my appreciation for some awesome shows. My hope is that in sharing my feedback, the hosts themselves received my positive words, and also that my 5-star reviews will help bring them more listeners. I know it’s not an earth shattering act, but every step towards more love and positivity in this world is a step in the right direction!

Two days after Christmas we packed up our car and embarked on the 20-hour drive to California to celebrate the holidays with our families. After our disastrous road trip in August, we’d sworn off long car rides for a while—then we stared looking at flight prices, not to mention the cost of shipping Christmas presents, and decided to suck it up and make the drive after all. Our trepidation was all for not, as Charlie proved to be a fantastic passenger, truly night and day from the last trip. I was so proud of our little road tripper! We made the smart decision to stop for the night, rather than driving straight through, and Charlie was quite literally bouncing off the walls of the hotel room (at midnight); our poor neighbors! 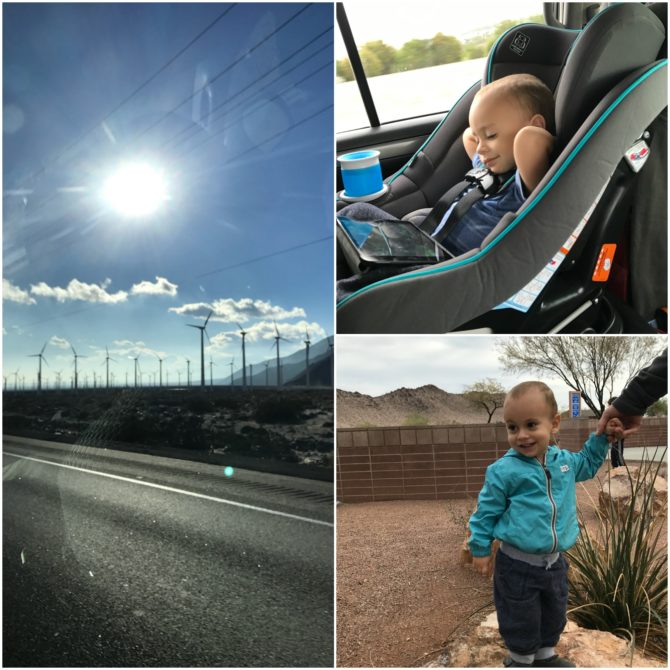 We spent the first four days of our trip with Luke’s parents in Riverside. The time there was bittersweet, as this was the last time we would be staying in that house before it sold (since our visit, my in-laws have already moved out). We opened Christmas presents, got to visit with some extended family, and spent a morning with my friend Cara. Highlights for Charlie included playing with my in-laws’ animals and running around their giant yard. We did absolutely nothing for New Year’s, and it was wonderful: I celebrated the New Year on Texas time, and was in bed before midnight, which NEVER happens (my usual bedtime is closer to 1:00 or 2:00). 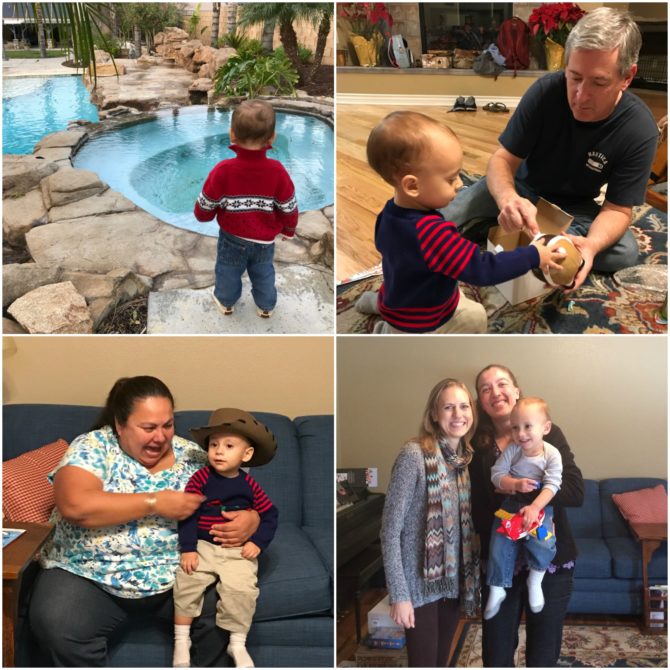 The last half of our California trip was spent at my parents’ new home in Huntington Beach (they literally finished moving out of their Brea home—where I grew up—the morning we arrived!). It was strange seeing all of my parents’ belongings in a new house, and I missed the feeling of being home, but we love their new place and its gorgeous views of the water. During our stay we celebrated Christmas with my grandma and got to see a lot of my brother and sister-in-law; they don’t have kids yet so it’s so fun to see them interact with Charlie and imagine what they will be like as parents. We went to Downtown Disney one evening (Charlie loved all the lights!), got to hang out with Deanna and her daughter (Charlie’s girlfriend) Kate, and took lots of trips to the park. I also spent a morning going through boxes of all of my old stuffed animals that had been in my parents’ garage for the last decade; so many fun memories, and I was proud of myself for keeping just a few favorites (#teamminimalism)! 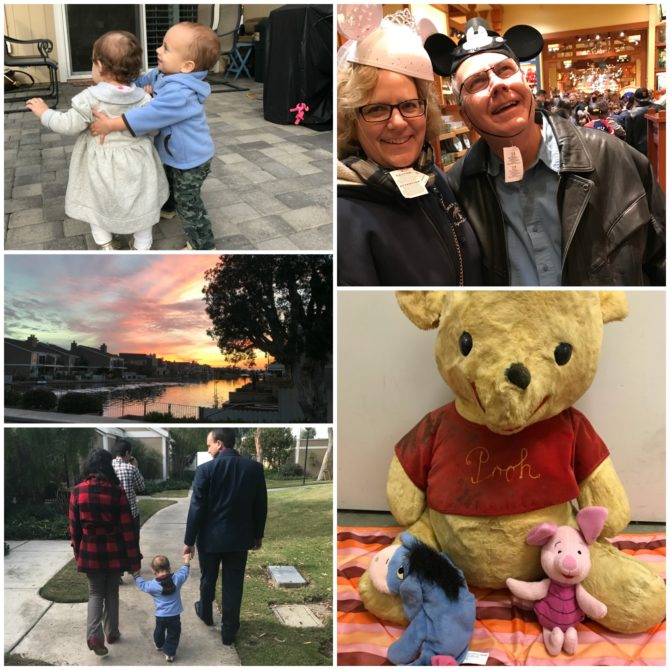 Though our time in California was short, it was so wonderful to spend quality time with our families and some friends. We had lots of great conversations, and I just loved seeing Charlie form unique relationships with each grandparent. He changes so much between each visit that every time we’re together is different and even more fun! I do miss so much about California (did I mention I ate Flame Broiler at least six times while we were there?!), but was glad to come back to Texas which I’ve grown to love just as much. 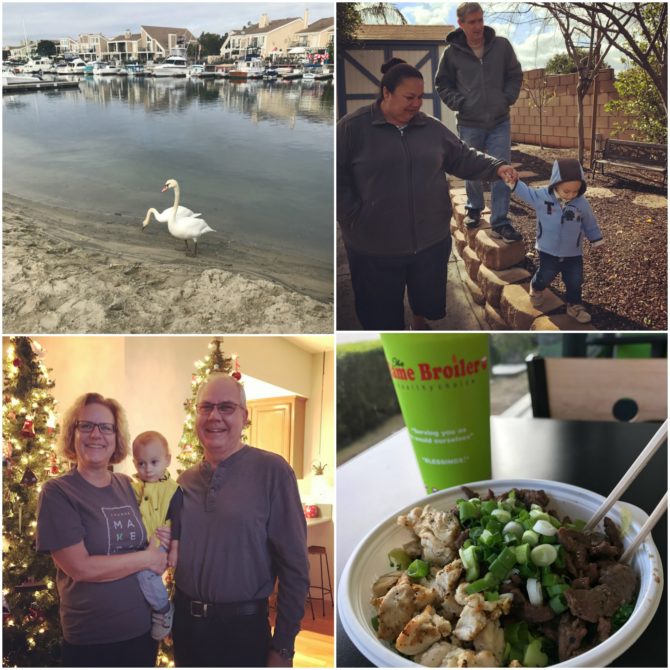 We celebrated Charlie’s SECOND birthday, though not quite as elaborately as last year’s festivities. The day before his birthday we took him to a local indoor play place, and he had a blast jumping in the bounce houses, diving into the foam pit, and sliding down the slide about a hundred times. Unfortunately most of my pictures turned out blurry, but I suppose that’s proof of just how much fun my little birthday boy was having! 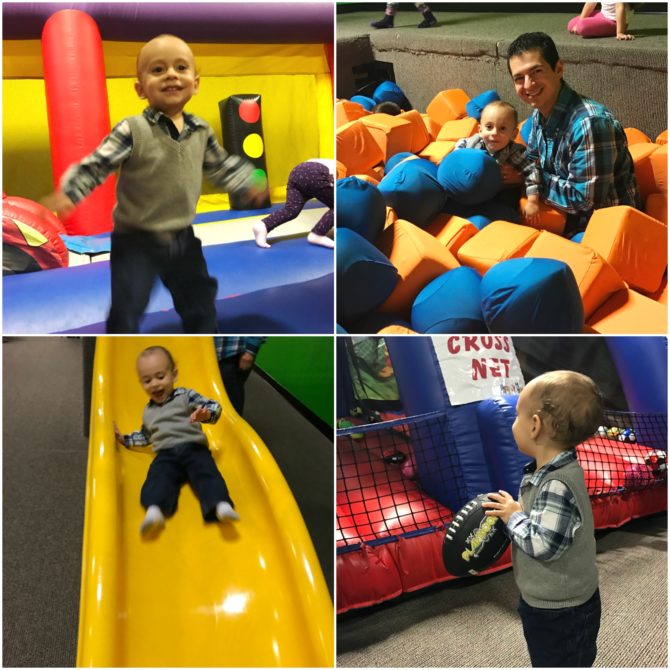 We kept things pretty simple for the day of his actual birthday: I decorated his play area with some fun Finding Dory decorations, let him pick out a balloon at the store, and had cupcakes for lunch. (He was so excited to blow out the candle on his cupcake, then burnt his lips on the flame, poor guy! All that blue frosting definitely helped him feel better.) His gift from us was a giant train table, which has proven to be one of the best purchases we’ve ever made—Charlie is in love! 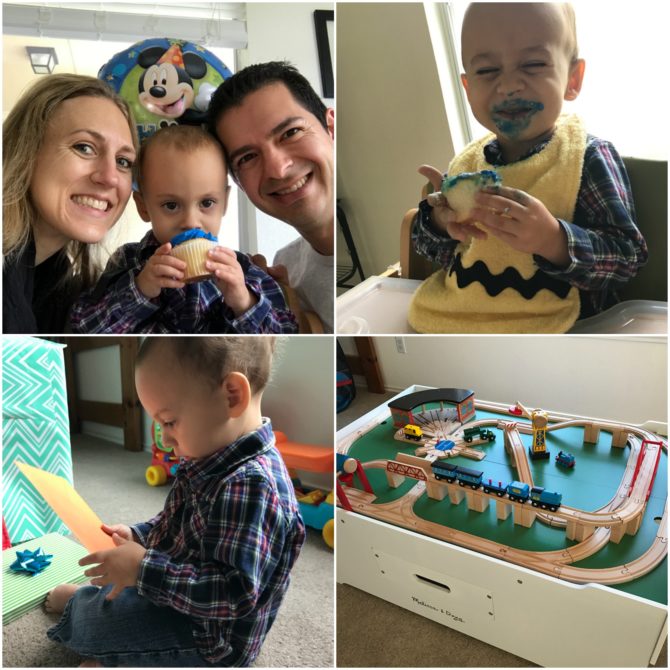 This past week my sweet Bible study friends threw a little birthday lunch for Charlie at Phil’s Icehouse. Despite temperatures in the 50s, we sat outside and let the kids play on the big playground while we moms chatted over lunch. Then Charlie opened presents, which led to a few meltdowns on multiple fronts—life with toddlers is always an adventure! I feel so blessed to be mom-ing alongside this great group of friends I’ve made here in Texas, and am grateful for cute little friendships Charlie is forming with their kids! 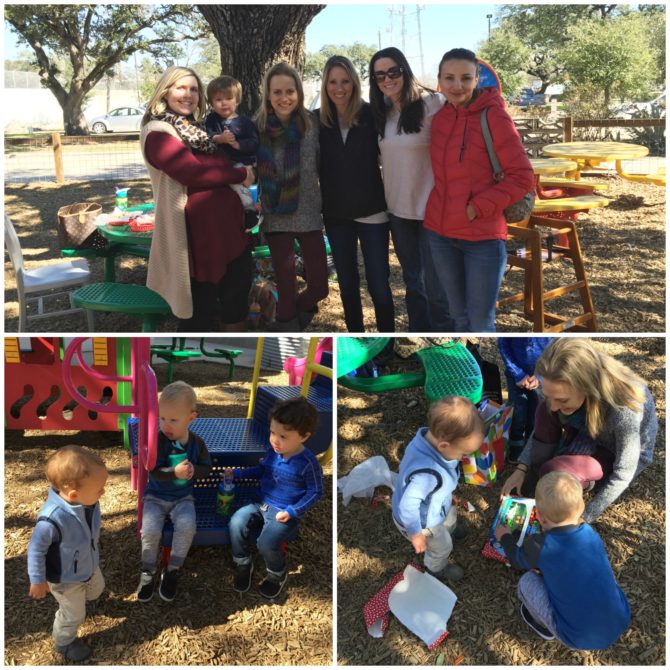 As always, I’m linking up with Leigh Kramer to share what we are into this month! What was the highlight of YOUR January?