This month has been pretty low-key around here, and after the jam-packed month we had in June, it’s been a welcome change of pace. These long, hot days have been filled with the usual errands and household chores, as well as plenty of playtime both indoors and out. Here’s a look at what summer has been looking like for me. 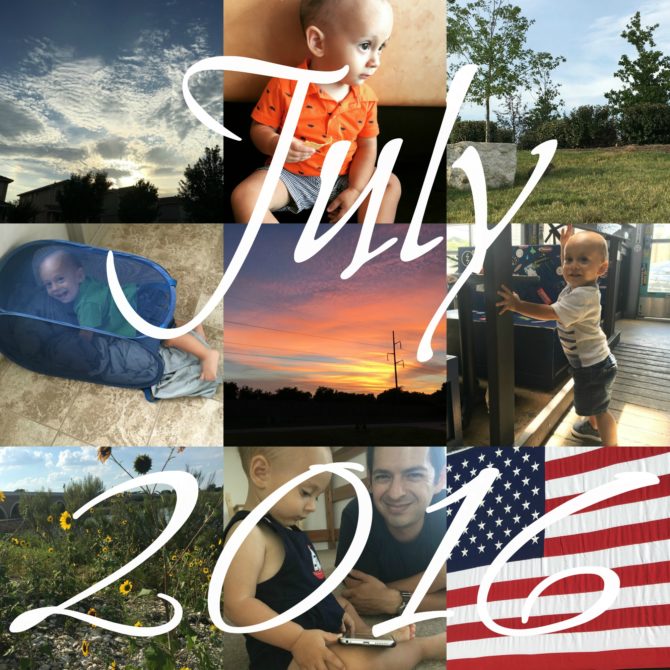 I often don’t get around to reading a book until years after its release, so it was fun this month to read a few books that were published within the last year. Each of these books—Smarter Faster Better, Be Frank With Me, The Royal We, and The Nest—surprised me in some way: three were unexpected let-downs, and the fourth proved to be much better than I had anticipated. I can’t wait to share my complete thoughts in next month’s reading wrap-up! Until then, I’ll let you guess which of these four was my top pick. 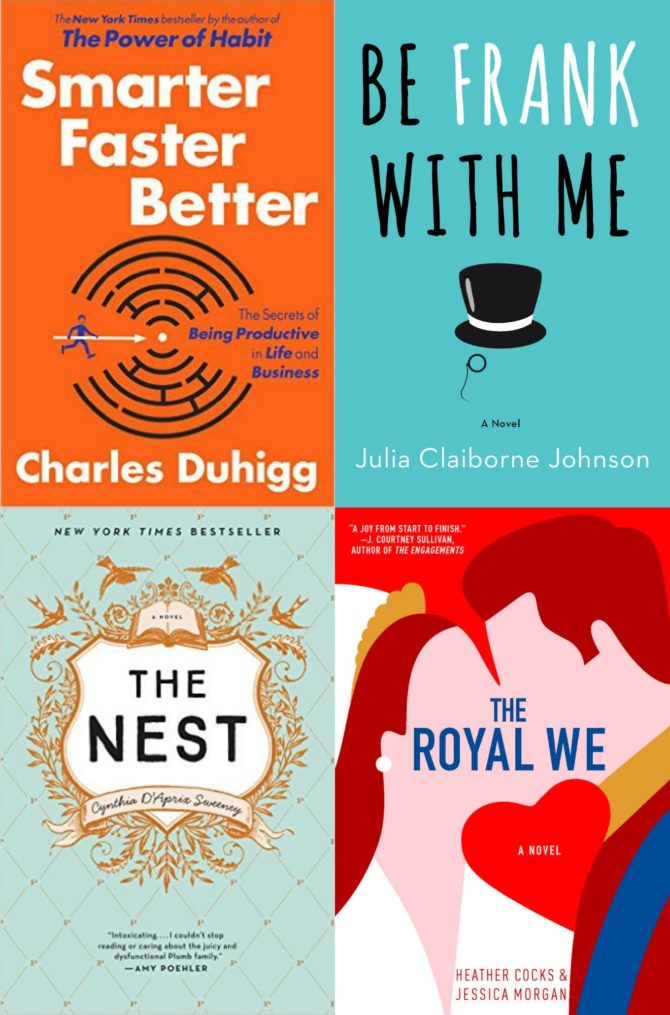 My mom and I enjoyed the first “meeting” of our Mother/Daughter book club and we are following up A Tree Grows in Brooklyn with Rebecca, another classic neither of us has ever read. So far it’s good, and very creepy.

I’ve been diligently working my way through the categories on my 2016 Reading Challenge. I just finished up Notes From a Blue Bike as my “book by a blogger I follow.” Up next I plan to read Elevating Child Care: A Guide to Respectful Parenting as my “book about parenting.” I love Janet Lansbury’s podcast, so I’m hoping her book is just as good. 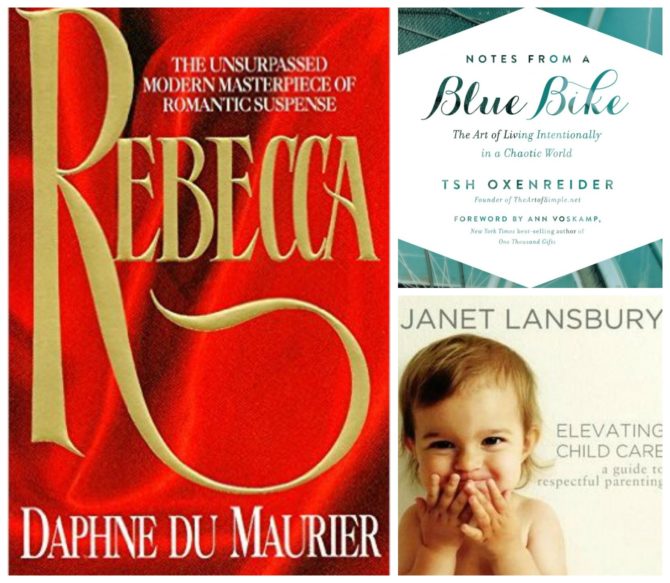 Downton Abbey: Luke and I decided to break out of our sitcom rut with something a bit weightier. We had watched the first two seasons of Downton Abbey a few years ago, and now that the series has wrapped up we figured it would be a good time to watch all six seasons. I had forgotten how much I LOVE this show! Complex characters, engaging plots, gorgeous costumes and scenery, and enough humor to satisfy our need for some nightly laughs. (Lady Violet seriously has the most hilarious lines! Luke and I now find ourselves reciting them to each other all the time!) We are currently midway through Season 4, and while I think I preferred the lighter tone of the first season, I have been impressed with the writers’ ability to deliver fresh, outstanding content with each episode. The episodes are so long that it takes us a couple of nights to get through them, but I don’t mind because it means our Downton experience gets to last a little bit longer.

Finding Dory: It had been more than two years since I stepped foot in a movie theater, so when my sister-in-law invited me to tag along with her and her room mate to see Finding Dory I couldn’t pass up the opportunity. (I assuaged my guilt over seeing a kids’ movie without my own kid by reminding myself that Charlie is way too young to go to a movie. . . one day, buddy!)

I’ve grown to expect nothing but the best from Pixar, and Finding Dory lived up to the Pixar standard: superb animation, clever story and dialogue, and more than a few tear-jerker moments. Finding Dory doesn’t quit have the panache of some of the other Pixar films, but it might very well be the most heartwarming. (Though my mama’s heart just about broke in a few scenes.) I also couldn’t help but notice some touching spiritual undertones: I doubt the writers intended Dory’s search for her parents to be viewed as a metaphor for our quest to find God, but a strong case could be made for such an interpretation!

{{A discussion of Finding Dory wouldn’t be complete without mentioning Piper, the short that precedes the film: those five minutes alone would have been well worth the price of admission—it was quite possibly the cutest thing I’ve ever seen!}} 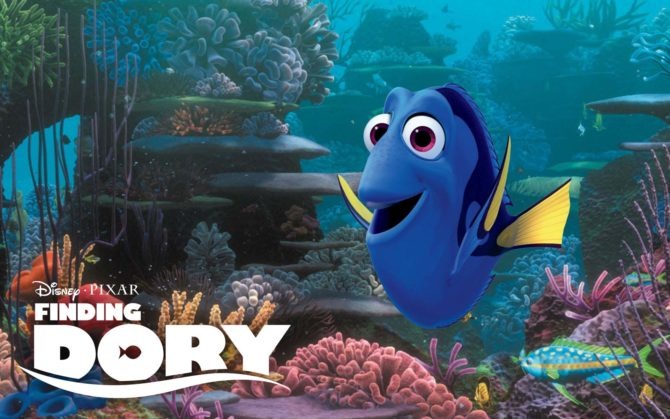 I usually get my music through the free version of Spotify. Earlier in the summer, Spotify had a promotion I couldn’t pass up, so I decided to go Premium for a few months. In addition to enjoying my weekly custom playlists, I—along with the rest of the nation—am spending quite a bit of time listening to the amazing Hamilton soundtrack. (By the way, if you are a fan of Hamilton you must check out this fantastic article: Hamilton is fanfic, and its historical critics are totally missing the point.)

I’ve also fallen in love with the music from The Civil Wars. Joy Williams’ recent solo album, Venus, is one of my favorite albums but I had never explored the music from her time as half of the popular folk rock duo; I’m loving their sound and am sad they are no longer making music together. 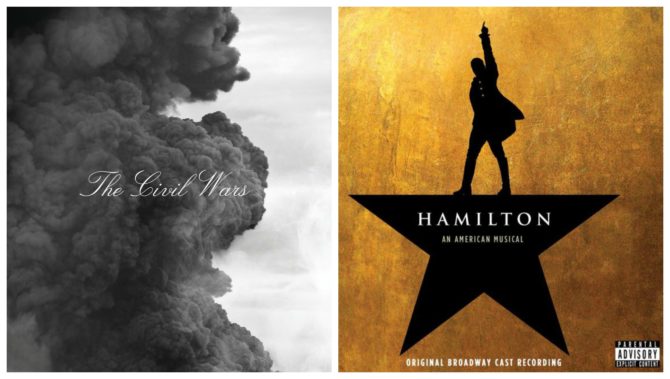 This month, in addition to my usual line-up of podcasts, I added a bonus episode of The Popcast that took a deep-dive look at the show Friends. With so many free podcasts regularly filling my feed, I was at first reluctant to pay for an episode, but the 75-minute show proved to be WELL worth the dollar asking price. I’m not the biggest fan of Friends (I’d never even seen it until last year), but I loved Knox and Jamie’s exploration of the show, which included a discussion on everything from its cultural significance to behind-the-scenes casting decisions, as well as their own favorite characters, episodes, and storylines. I’ve found that I sometimes like talking about a movie or show even more than watching it, and this fun Popcast episode brought me more enjoyment than Friends itself! 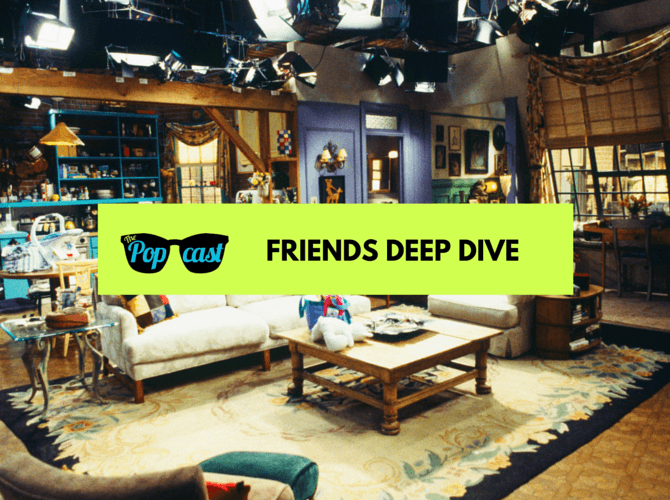 The WaumbaLand Parent Cue: I’m surprised by how much I have been appreciating the simple parent “cheat sheet” that is released on our church’s app each month. The Parent Cue fills us in on what Charlie has learned in Sunday School each week and offers ideas on how to reinforce these concepts at home. We passed out similar parent flyers back when I taught Sunday school at our church in California; I rarely gave them much thought and figured most parents just threw them away when they got home. But now that I’m a parent myself I am finding the simple suggestions extremely helpful. Luke and I have talked a lot about wanting to set a strong spiritual groundwork for Charlie, but not quite knowing how to do that at his young age. The Parent Cue gives us a great place to start! 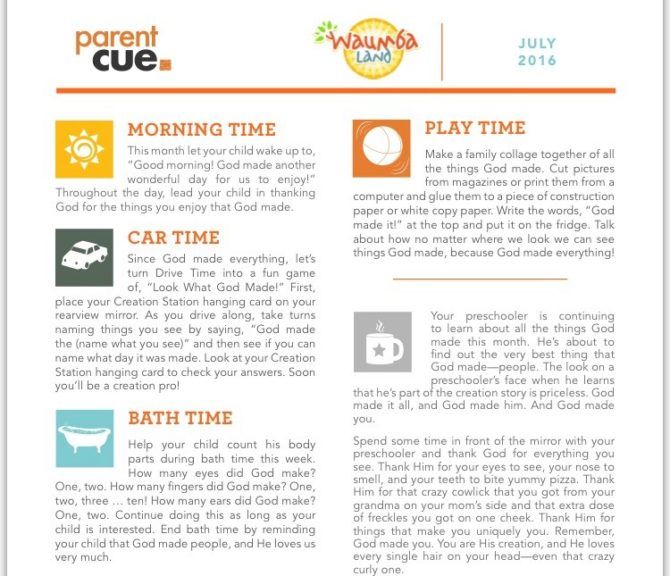 Chasing My Little Explorer: Charlie is at that age where he wants to explore everything around him, and all of it at once. He especially loves being outside, just running around and taking it all in, and I’m having so much fun being his shadow. We’ve been spending lots of time exploring parks, the statue garden outside our rec center, and even our backyard, and I’ve enjoyed letting Charlie take the lead while I tag along for the ride. It’s not always easy to set aside my own agenda for how our time might play out, or to relinquish my desire for Charlie to stay CLEAN, but those moments when I’m able to let Charlie be his curious self—and allow myself to be fully present with my son—are pure gold. 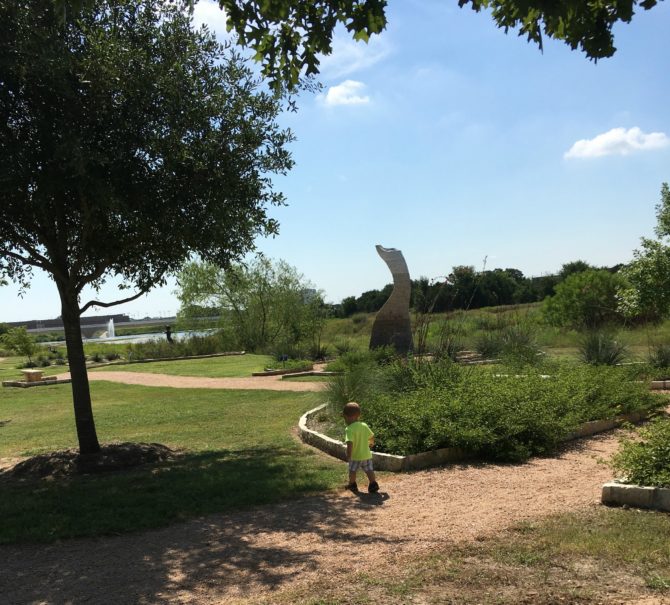 I’ve written before about my interest in using Pinterest to explore my Myers-Briggs type (INFJ). This infographic is probably the most insightful one I’ve come across. The traits and stressors describe me to a T, and I love the description of INFJ’s as walking contradictions who make sense out of things that defy logic. That’s definitely me! (I wouldn’t describe myself as a hopeless romantic with a dirty mind, though. . . just in case you were wondering.) The image below is just a screenshot of one portion of the infographic; if you click the image, it will take you to the full infographic, a must-see if you or someone close to you is an INFJ.

Have you seen this incredible video of Shawn Johnson sharing her personal testimony? In it, she talks about her devastation over receiving silver metals in the 2008 Olympics, and the ways in which her own perfectionism and public scrutiny nearly destroyed her. I was crushed to hear of the heartbreak she experienced at such a young age, but I am blown away by her courage to share her personal struggles. Her story of giving God her desire to be Number One is such an amazing inspiration. 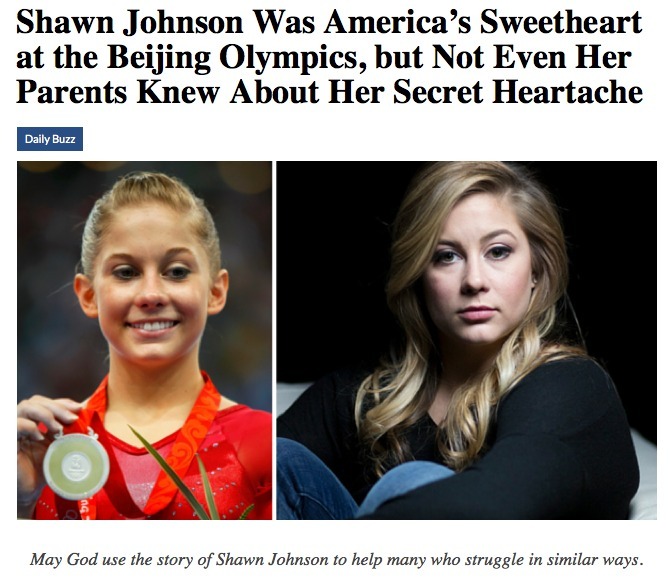 Like I said above, our July hasn’t seen too much excitement. The month’s biggest event was Fourth of July. It’s still a bit weird to spend holidays without extended family, but our little trio had a fun celebration of our own. We spent the morning at our town’s Independence Day parade; it was quaint, but the whole town turned out which made it a lot of fun. Later in the day we spent time at the pool, checked out the festival at our city park, and topped off the day with a barbecue at home. It wasn’t an earth-shattering way to spend the holiday, but it still felt special. 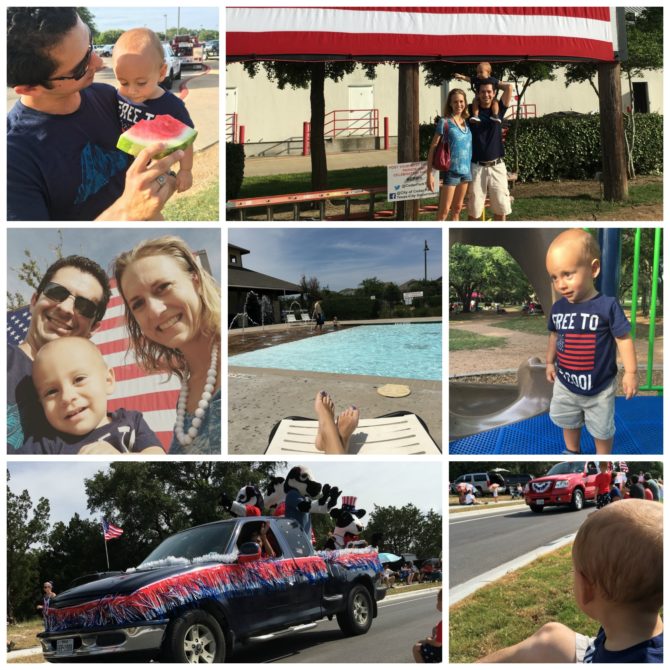 Of course, I had to dress Charlie up for the holiday. It’s amazing to look at pictures of him from last Fourth of July and see how much he has changed in a year. My little boy is all grown up! 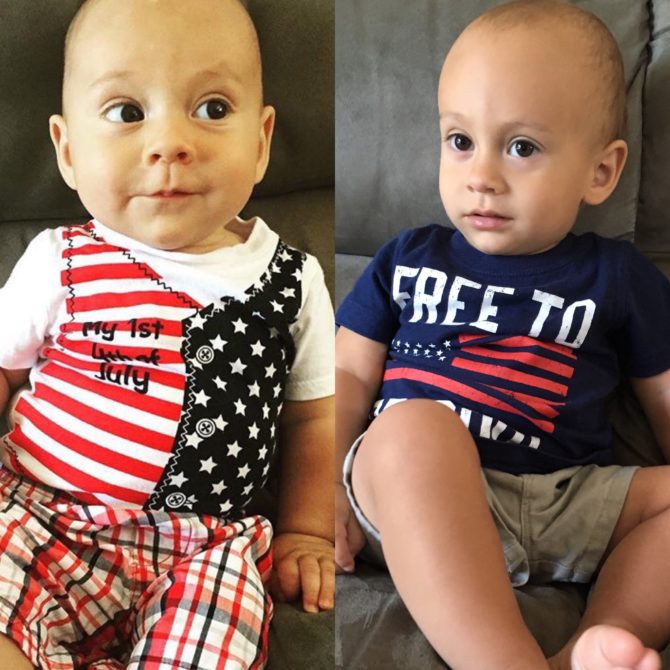 I’m linking up with Leigh Kraemer to share what we are into this month!