Welcome to Part Two of this month’s Quick Lit, with my wrap-up of the fiction books I read in the past month. My thoughts on these books were across the board, with a couple that I loved and two that I really didn’t. Here are my reviews! 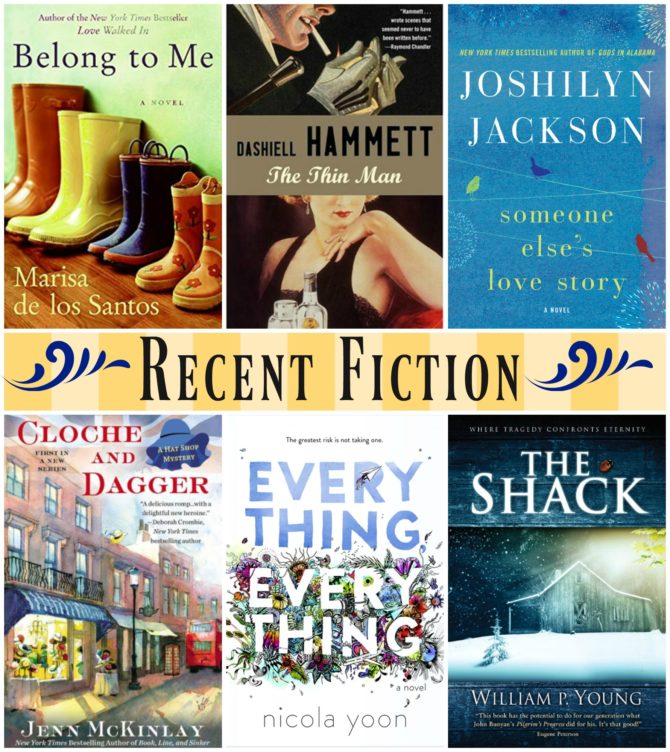 Belong to Me, by Maria de los Santos: Cornelia and her husband, Teo, are relatively newlywed urbanites who have recently settled down in suburban Philadelphia, where they hope to start a family. As a former city dweller, Cornelia finds herself out of place in her sorority-like neighborhood and has particular trouble with her overbearing and judgmental neighbor, Piper. Cornelia finds a solitary friend in Lake, another newcomer to town whose secret past keeps the two women from establishing the intimacy Cornelia desires.

As the story continues, the focus shifts away from Cornelia (whose chapters are written in first person) to those of two other characters: Lake’s precocious teen son, Dev, and Piper, the neighbor who seems determined to make Cornelia’s life miserable. We learn that, while Piper seems shallow and vicious, she is experiencing trials of her own, neglecting her own husband as she cares for the family of her best friend who is dying for cancer. We also gain insight into Lake’s past as Dev embarks on a hunt for the father who left his mom before he was born. These three main characters—Piper, Dev, and Cornelia—are all searching for the one person to whom they belong, but along their journeys they stumble into the messiness of relationship and discover that connection and belonging are hard to come by and are often found in the least expected places.

I was surprised by the depth of this book that I thought would be breezy chic-lit. The writing is strong and the characters are multidimensional and intriguing, as are their stories and relationships. There’s quite a bit going on in this book and though I didn’t care for the three different storylines at first, I liked seeing the ways in which they intersected and eventually came together. The novel raises a few interesting ethical issues and sheds light on personality traits/disorders (always an area of interest for me), and for the most part these weightier aspects simply move the story forward rather than dragging it down.

I hadn’t realized until after reading the book that this is actually a sequel to Love Walks In, so I’m looking forward to reading that one in the future. 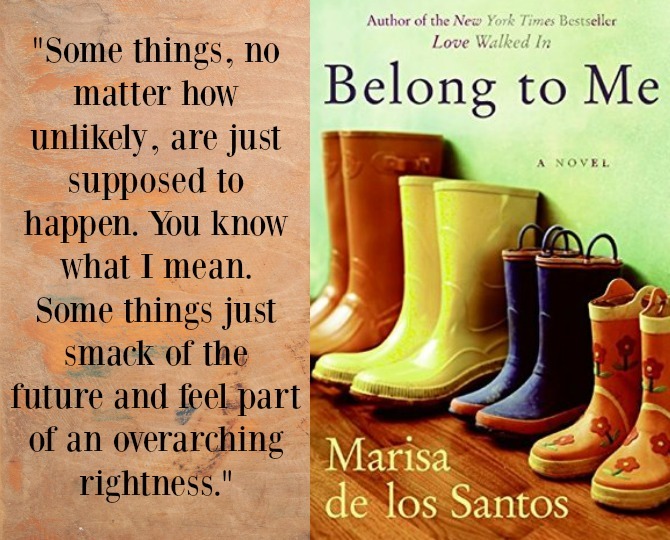 The Thin Man, by Dashiell Hammett: I read this book for my 2017 Reading Challenge selection as a book written during the 1930s. It wasn’t a favorite, but I’m glad I read it. I’ll be sharing a full review next week. 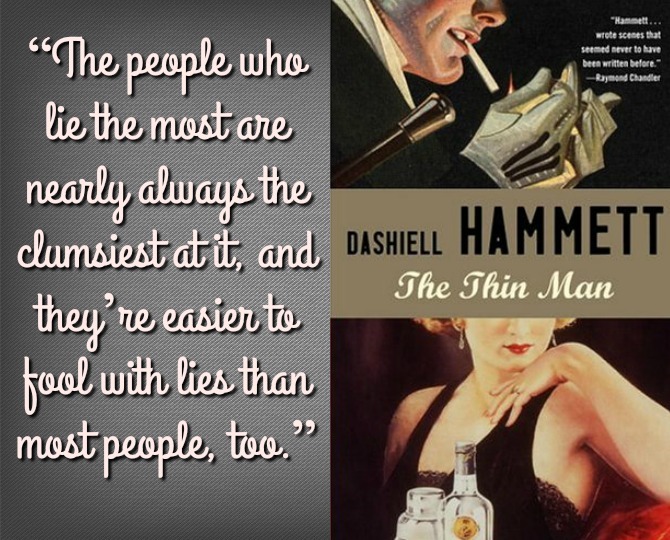 Someone Else’s Love Story, by Joshilyn Jackson: Shandi Pierce has never known true love, at least not the type she’s been looking for. Between raising her 3-year-old son Natty (conceived in a frat party rape [kind of] when Shandi was 17) and navigating complicated relationships with her divorced parents, she hasn’t had much time for a love life. But destiny intervenes when she finds herself staring down the barrel of a gun at a convenience store hold-up. Shandi and Natty are rescued by the handsome and brilliant William Ashe, and for Shandi it’s love at first sight. But William is a complicated individual: not only is he on the Autistic spectrum—making him difficult to get to know—but he is still mourning the loss of his beloved wife and two-year-old daughter, who died a year earlier in a tragic accident.

In the days following the hold-up, Shandi makes a back-door attempt at wooing her rescuer by recruiting William (a geneticist) to help her determine the identity of Natty’s father. Shandi hopes that the the project will jumpstart a relationship, but soon discovers that the love story she is stepping into might not be her own.

This book was not at all the lighthearted romance I expected. (For Belong To Me, that was a good thing; for this book, it wasn’t.) This is a complicated novel with some very mature themes (including autism, rape, relgion) and complex characters. The story is well constructed and refreshingly non-formulaic, with a good balance between backstory and present-day plot.

HOWEVER. I did not find this to be an enjoyable read. There is a lot of sex (both of the steamy and violent varieties), which is something I generally steer clear from in my books; I can handle a sexy scene or too, but when sexual themes fuel every storyline (as is the case with this book), it’s just too much for me. I’d heard such wonderful things about Joshilyn Jackson, but this one was such a letdown that I doubt I’ll be reading more from her.

Audiobook Note: This book is read by the author; I wouldn’t have selected her as a narrator (she has a great reading voice, it just didn’t seem to fit the book), but I do always enjoy it when authors read their own books and it seems especially unusual for fiction. 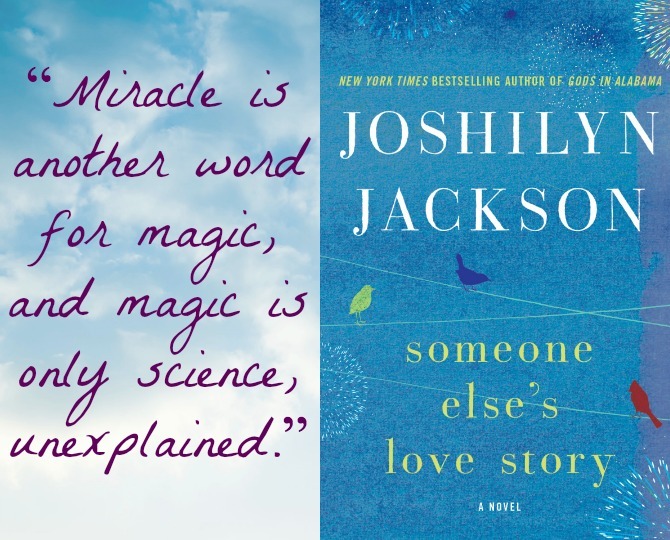 Cloche and Dagger, by Jenn McKinlay: When Scarlett’s love life goes down in flames (and the humiliating conclusion becomes a widely publicized scandal, thanks to an online video that spread like wildfire), she flees her life in Florida, hoping to find peace and solitude in London where her cousin Viv owns a successful hat shop. Scarlett arrives in London, where she is not met by Viv (who has gone MIA), but by the handsome Harrison Wentworth, a childhood friend who seems to hold a grudge against his old pal Scarlett. Then a wealthy client turns up dead and suspicion is cast on Scarlett and the missing Viv. What Scarlett had hoped would be a fresh new start turns out to be far from the adventure she had expected.

There is nothing too special about this cozy little mystery. It’s pretty formulaic, and the writing is just okay. But the story is cute and I enjoyed the characters. I haven’t read any of Jenn McKinlay’s other books, but she has quite a few of them and I’ll happily pick up another next time I’m looking for a light read to fill a whodunit craving. 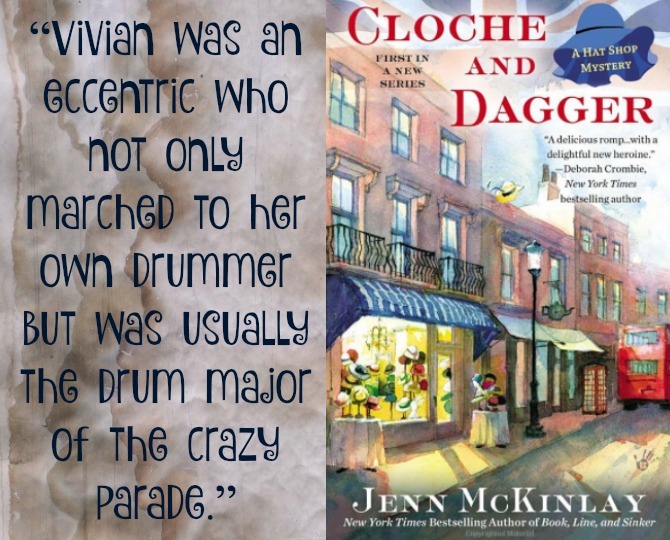 Everything, Everything, by Nicola Yoon: Maddie suffers from a rare disease that makes her allergic to nearly everything and has kept her prisoner in her house for the past 17 years. She has mostly adjusted to the fact that will never experience the world beyond the adventures she experiences in her beloved books. Then an intriguing boy moves in next-door, sparking in her a zeal for the life she never thought she could have. As Maddie and Olly enter into a forbidden romance, she begins to wonder whether she is willing to jeopardize her health and possibly even her life to experience life on the outside, if it means she can be with him.

Last month I read Nicola Yoon’s more recent book, The Sun is Also a Star; while I had issues with some of the content of that novel, I was impressed with the multifaceted characters, edgy themes, and unique narrative style, and was hoping for more of the same in Everything, Everything. Unfortunately, I was sorely disappointed. While some of the themes are similar (thoughts on the butterfly effect, a poetic protagonist, mixed-race couples, etc), the writing in this book (Yoon’s debut novel) is shallower, and the romance is trite and not very believable. The story has little of the originality or nuance I had anticipated, and I’m having a hard time understanding why so many readers whose opinions I generally trust rated it so highly!

To be fair, I did like a couple of things about Everything, Everything: Olly and Nicola have some cute online dialogue which I found sweet, and I (mostly) liked both of the protagonists, even though I didn’t care for their decisions. I also liked the twist ending, which I did see coming, but still found satisfying. However, these points weren’t enough to redeem the book for me. I realize I might not be the best or most impartial judge, since I almost always dislike teen romances. If this is your genre, you may very well love this book, but it just wasn’t for me. 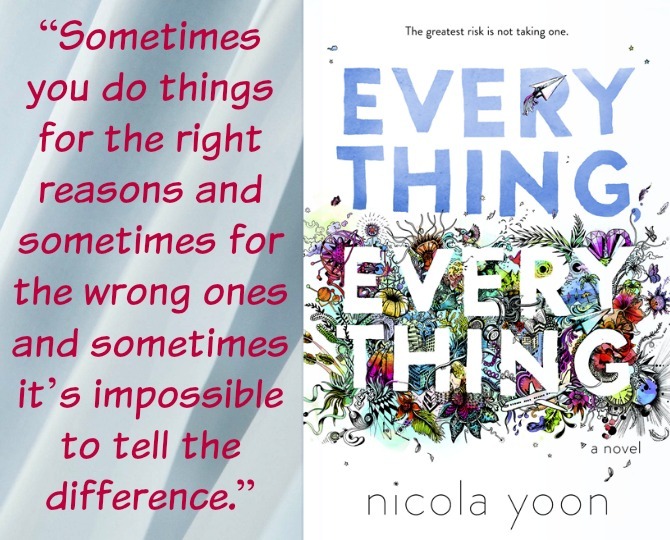 The Shack, by William Young:  The Shack is an old favorite of mine and after seeing the movie last month I was eager to revisit it. The book tells the story of Mackenzie Allen Phillips, a man with a broken past and a complicated relationship with God that grows even more strained following the tragic loss of his youngest daughter. Mack has suffered years of depression when he receives a cryptic message inviting him to the last place he wants to revisit: a shack associated with his daughter’s murder. Against all reason, Mack decides to follow through on the invitation, and is greeted by God. The experience transforms his life and forces him to reevaluate everything he thought he knew about God and faith, justice, and forgiveness.

I loved this book the first two times I read it, and got even more out of it now, after having seen the movie (which follows the book incredibly closely, though I prefer the book’s ending). I love the way Young couches difficult theological discussions into a story that is relatable and relevant. I don’t agree with every point of doctrine, but as I shared in my review of the film, The Shack has helped me understand some aspects of my faith that were confusing or unresolved. It also raises a lot of questions and reinforced the need to personally be in Scripture so that I can be certain of my core beliefs.

I would love to meet with a theological expert, or even just a group of fellow Christians, to discuss some of the trickier aspects of this book. But even without someone to walk me through it, The Shack is such a powerful book for me and an example of the power of story for offering insight into new ideas (and even old ones). 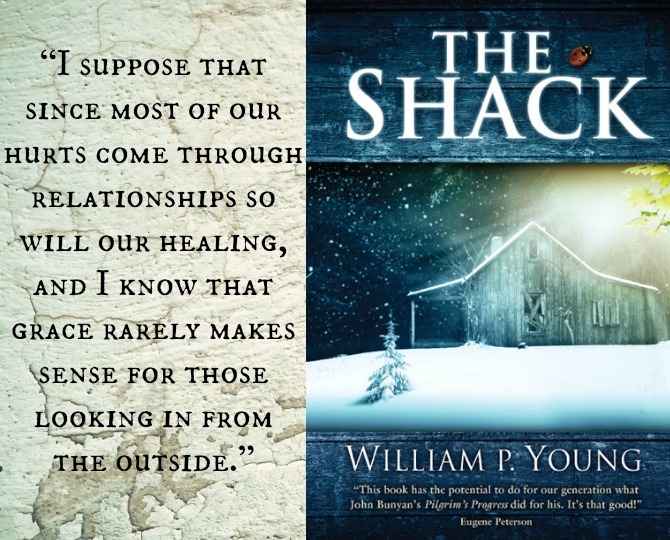 I’m linking up with Modern Mrs. Darcy to share what we’ve been reading lately. If you’re stopping by from the linkup, it’s great to have you here! Please be sure to check out Part 1 of this month’s Quick Lit for reviews of my recent nonfiction reads! 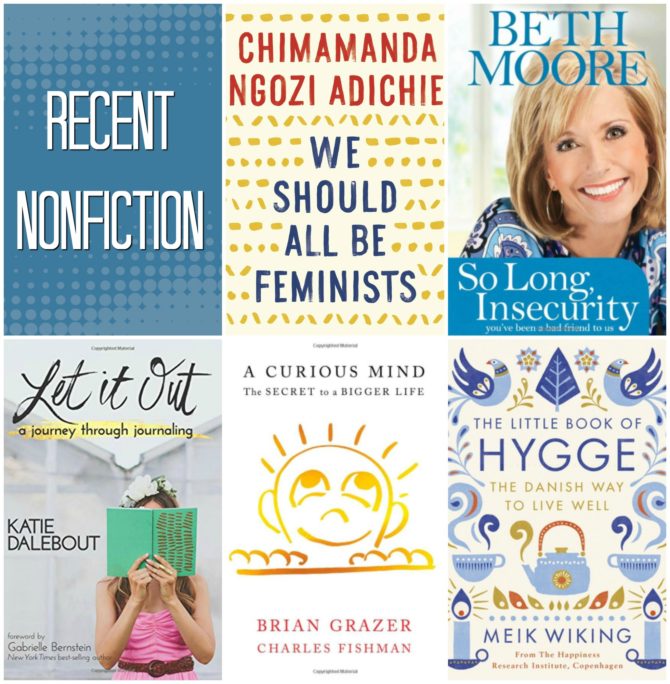