People have been talking about “summer reads” for as long as I can remember, but it’s only within the past few years that Fall Reading seems to have become a thing. It makes sense: fall weather is reading weather, and even those of us no longer in school are still likely to associate this season with a return to the books. Here’s a look at some of the books I’ve been reading this fall. 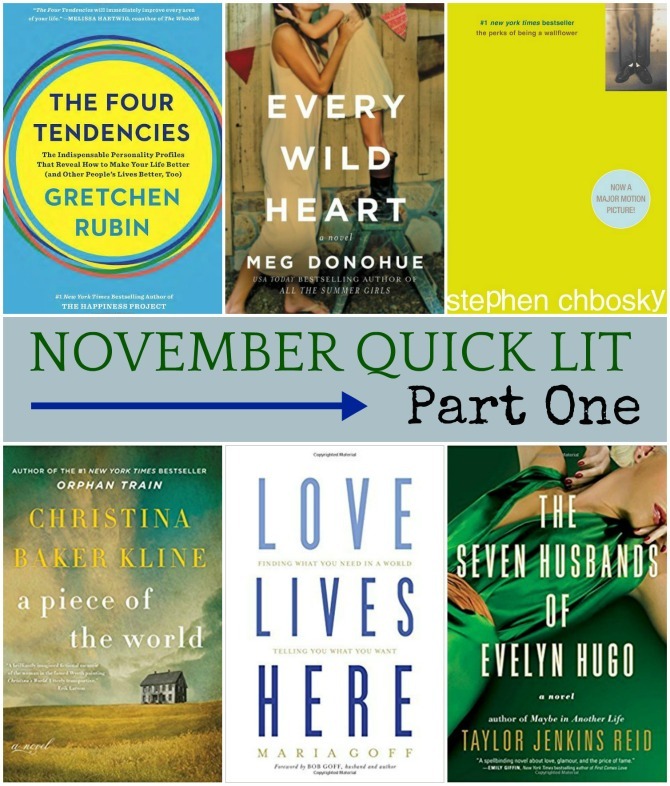 The Perks of Being a Wallflower, by Stephen Chbosky: I’m nearing the end of my 2017 Reading Challenge, and it seemed fitting to pick a book about highschoolers for my Book Written in the 1990s, since I was a highschooler in the 90s, too. Thankfully my high school experience did not mirror the ones described in this book! I will share many more thoughts in a full book review post later this month; all I can say now is that my reading experience was more than a little complicated. 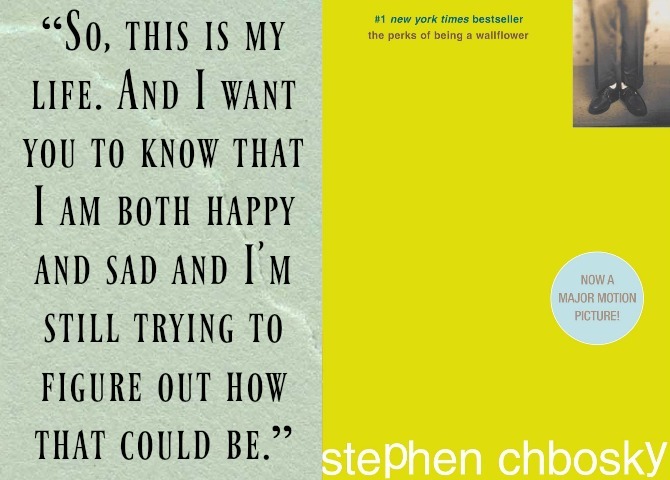 Every Wild Heart, by Meg Donohue:  Gail Gideon is a nationally-known radio personality who balances her late night talk show with single motherhood to her 14-year-old daughter, Nic. Gail’s career is on the precipice of launching to the next level—her own TV show—when she begins receiving anonymous threats from a disgruntled listener. Meanwhile Nic, a painfully shy teen who is struggling to make peace with the harshness of the high school social scene, is involved in a horseback accident that lands her in the hospital. When she awakens from her coma, she seems to have shed her social anxiety and emerged a new person. She begins to fall for the cute new boy at school, as her mother also discovers a new love interest.

Many reviewers commented on some confusion regarding the genre of this book, and I agree: it reads like YA but has the romance of a breezy chic lit, with a halfhearted attempt at mystery/suspense thrown in. I didn’t mind the light and fluffy nature, and I liked the mystery twist, but I do think I would have enjoyed the book more if the story had more substance and the characters were less one-dimensional (which is likely why the dynamic between Nic and Gail felt unnatural to me).

I’m not the biggest YA fan, but here, the high school plot line is the more compelling of the two. I found the descriptions of teen bullying via social media believable and utterly terrifying. The story wraps up well, and while the resolution is sweet, it’s more than a little cheesy and would make for better television than bookish fare. 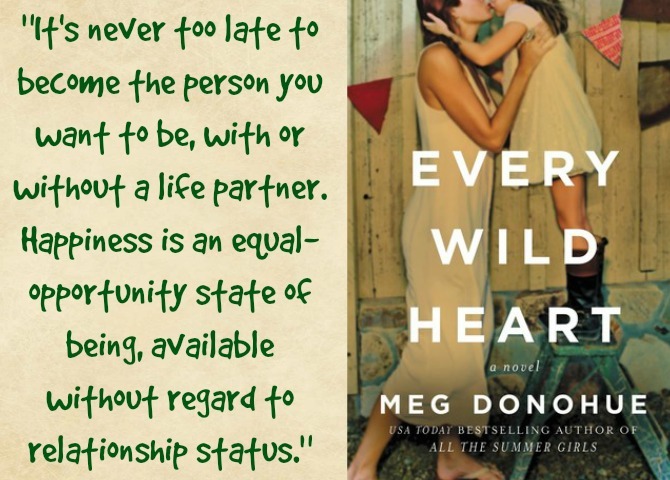 Love Lives Here: Finding What You Need in a World Telling You What You Want, by Maria Goff: I was introduced to Bob Goff a couple of years ago when I read his amazing book with my book club. I’ve been a fan ever since and often wondered what his wife must be like: who was the “Sweet Maria” who was able to tolerate his intense energy, enthusiasm, quirkiness, and antics? (As much as I loved reading about Bob’s adventures, I could not imagine living with him!) Many of my questions were answered in this, his wife’s first book. If Love Lives Here is an accurate indicator, Sweet Maria has earned her nickname. . . her sweet, gentle spirit oozes from every sentence. In many ways she is truly Bob’s opposite: calm, introverted, introspective, and reluctant to leave the comfort of her home, let alone her country. Yet I loved her book just as much as her husband’s, if not more!

Written in a warm, conversational style, Love Lives Here is comprised of quiet stories from Maria’s life and the lessons these experiences have inspired. There are a few interesting behind-the-scenes glimpses at the antics described in Love Does, but these are mostly new stories focused on what Maria has been learning from God (whereas Bob’s stories emphasize what he’s been DOING with God). She opens up about her struggle with insecurity and addiction, her journey of raising kids, and a few of the difficult events—past and present—that have rocked her world.

The book is heavy with metaphors and beautiful, thought-provoking quotes. I love the way Maria’s mind works, seeing God in every simple situation, drawing parallels to Scripture, and noticing the eternal truths within the everyday. She might not be gallivanting around the world with her husband, but her introspective truth-seeking is just as much a gift to the world as his energetic acts of service.

I began listening to this book in audio, but was having to pause every few sentences to take notes! I finally gave up on the audiobook and downloaded the ebook so I could highlight and notetake to my heart’s content. The gems in this book were too good to let them pass in and out of my ears without additional reflection. 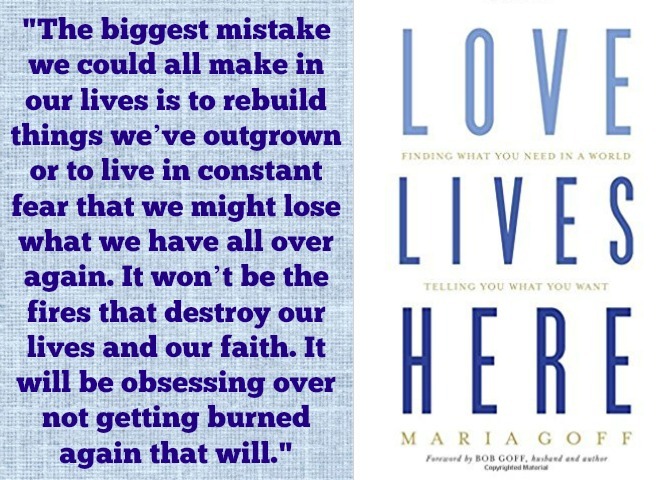 A Piece of the World, by Christina Baker Kline: This historical novel is based on the life of Christina Olson, the subject of Andrew Wyeth’s iconic painting Christina’s World. Told through Christina’s voice, the novel shares the painting’s origin story and also steps back in time to recreate Christina’s life on a remote family farm in Cushing, Maine. Though she is is middle-aged at the time of the painting’s creation, Christina has been confined to the farm for her whole life due to an illness that limits her mobility. Christina’s life has been marked by hardship and heartbreak, all of which Wyeth captures in his painting and which Christina Baker Kline has poignantly portrayed in this book.

I am a sucker for behind-the-scenes type stories like this one, and loved the ways in which Kline wove fact with fiction. The novel truly builds off of the painting, diving into its story and also emulating its stark setting and evocative tone. Christina is a complicated and compelling character, and I particularly enjoyed the dynamic she shares with Wyeth. However, I didn’t find the story itself very engaging: Christina’s life was a limited, somewhat unremarkable one, which doesn’t make for very stimulating reading. This is a quiet story, but still a worthwhile one. 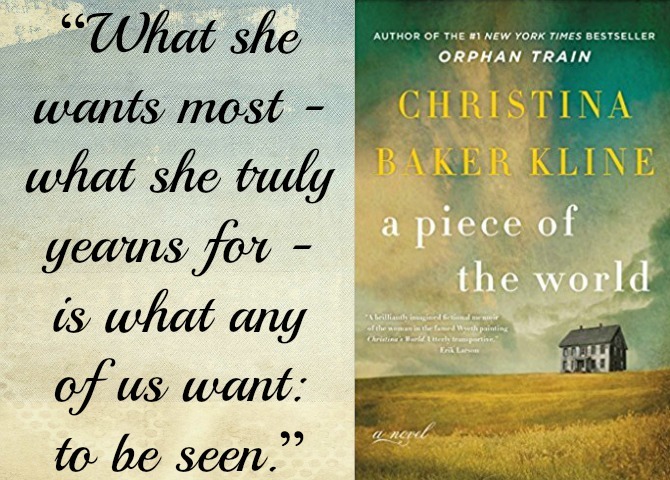 The Seven Husbands of Evelyn Hugo, by Taylor Jenkins Reid: Evelyn Hugo is an aging starlet who has been in the limelight for more than half a century. Born to Cuban immigrants in the late 1930s, Hugo was still a teenager when she made her way to Los Angeles and quickly became the best paid actress in the country. Her career spanned decades, and by the time she left show business in the 1980s, she had left seven husbands in her path. These relationships have been on the cover of every celebrity tabloid, but it isn’t until Hugo invites Monique Grant to her Upper East Side apartment that an outsider has been made privy to the full story of her romances and her life.

Monique Grant is an unknown magazine writer who is still waiting for her big career break. Nobody is more surprised than Monique herself to find that she has been hand-selected by a legendary Hollywood icon to be the biographer of a salacious tell-all about Hugo’s scandalous, glamorous life. As Evelyn begins to pour out the details of her love, Monique learns of the star’s ruthlessness, of the deeply held secret she has carried for years, and of the unexpected one true love of Evelyn’s life.

From its earliest pages, this novel emulates Hollywood’s glitzy, rapturous atmosphere, and I was immediately swept into the romance and intrigue of the story. I was especially captivated by the glamorous protagonist, whose story seemed so true to actual Hollywood legends that I had to resist the urge to look up her details on iMDB. I loved the novel’s unique structure, with chapters alternating between Monique’s interview conversation with the star and Evelyn’s first-person narration, with salacious tabloid headlines scattered throughout her biography.

The story quickly and unexpectedly veered into risqué territory that I found rather uncomfortable. I won’t go into detail, as that would give a lot of the story away, but this racy story thread kept me from enjoying the book as much as I would have liked. (I probably sound like a broken record with my too-much-sex-for-me line; I really wish books had ratings on them so that I could know ahead of time that a book will not be a Kendra-safe novel). I also struggled with the cavalierness with which marriage is treated in the book, though I suppose I could have anticipated this from the title alone; divorce is a sensitive subject for me right now (someone close to me is going through a divorce) and I doubt it would have hit such a nerve with me in the past.

Racy themes and sensitive issues aside, I enjoyed the premise of looking beyond the headlines to uncover the true story of a celebrity’s life. If you are comfortable with explicit content, this is an engaging and cleverly-told novel that is would make an  excellent beach read. 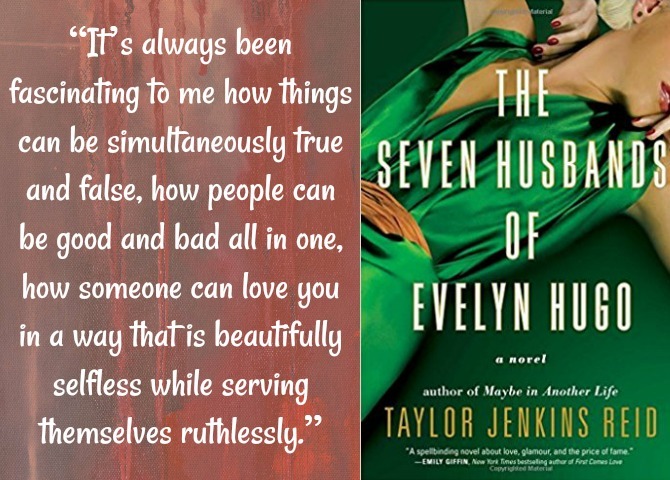 In The Four Tendencies, Gretchen describes each type, outlining strengths and weaknesses, explaining how they show up at work and home, and offering suggestions for living out the tendencies and for dealing with other people of each tendency. The descriptions include numerous detailed examples from her research and her own life.

I’m a huge Gretchen Rubin fan: her podcast is one of my favorites, and I have read, enjoyed, and liberally recommended her three previous books. I preordered this one as soon as it went on sale. That said, I shocked when the book didn’t live up to my expectations. I’m fully on board with the personality model itself and have found it very helpful in understanding myself and people around me; it’s less complicated than most personality models, but just as useful. However, I don’t know that I needed to read an entire book about the model, especially since I was already very familiar with the tendencies thanks to Better Than Before and the Happier podcast (where the Tendencies are a frequent discussion point). The Four Tendencies is unnecessarily heavy on examples, and the clinical writing style reads too much like a like a textbook to be truly engaging.

If you love personality models, I’d recommend this book, but expect to do quite a bit of skimming.

*For those who are curious: I am an Upholder, though I wish I was a Questioner (and I’ve started to lean more that way in recent years). To find out your tendency you can take the quick quiz here. 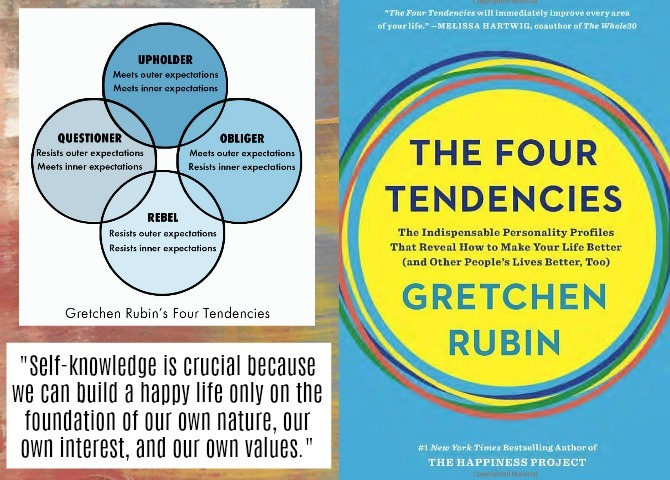 I’ll be back on Monday with reviews of six more books I’ve read in the past month. Have a wonderful (and, hopefully, book-filled!) weekend!