Wow, what a month this has been! If your November was anything like mine, I’m sure it was filled with some great moments, but also plenty of rocky ones; I think we are all ready to turn the pages on our collective calendars and start fresh with a new month. (Hopefully the arrival of the Holidays will help with that!)

I’ve learned a lot over the last few weeks. Much of it is better left unsaid, but here is my “okay-to-be-shared-publically” list of things I learned in November. 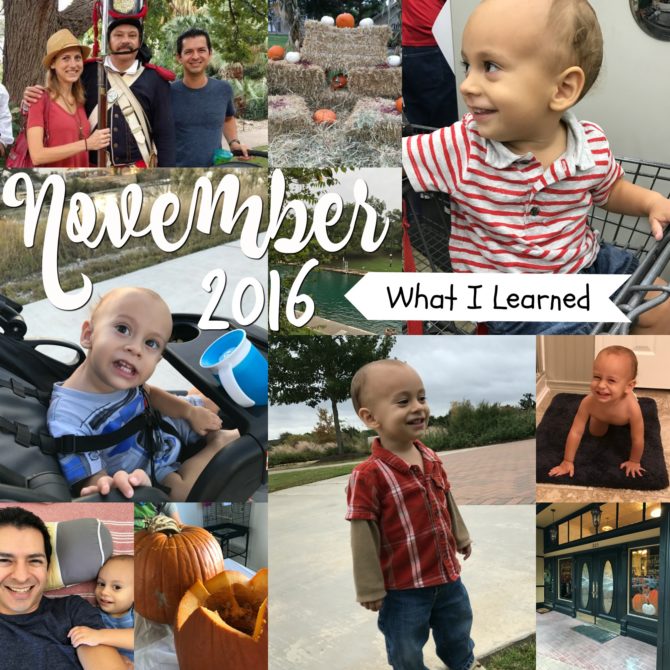 1. It is challenging to be completely authentic in these What I Learned recaps.

I do my best to be transparent and vulnerable in this space. These are qualities I value in other blogs, and I believe that such authenticity helps my readers connect with me in deeper and more meaningful ways. Being real in my writing takes a heavy dose of courage on my part, but it’s almost always worth it. That being said, I’m realizing that there are times when I can’t—or shouldn’t—bare my whole soul for all the world to read. Sometimes it’s because other people are involved, and their stories simply aren’t mine to tell. Other times, my thoughts and feelings are still in process and need further refinement before making their way into the public eye. I’m sure that there is a healthy medium between beneficial transparency and foolhardy candidness, but I have yet to discover that sweet spot with my own writing.

2. Children bring a lot of sickness into a household.

Before Charlie was born, it had been years since I’d had a cold or the flu, and Luke rarely got sick more than once per year. In the past several months, our family of three has been hit by more colds, flues, and stomach bugs than I thought was possible, and . (Update: In the time between my writing this post this past Monday and publishing it today, Charlie came down with another cold. I think I jinxed us!) I’m thankful we haven’t dealt with any serious illness, but I sure am hoping for some healthier times in 2017.

3. A baby porcupine is called a porcupette!

And it is seriously cute! 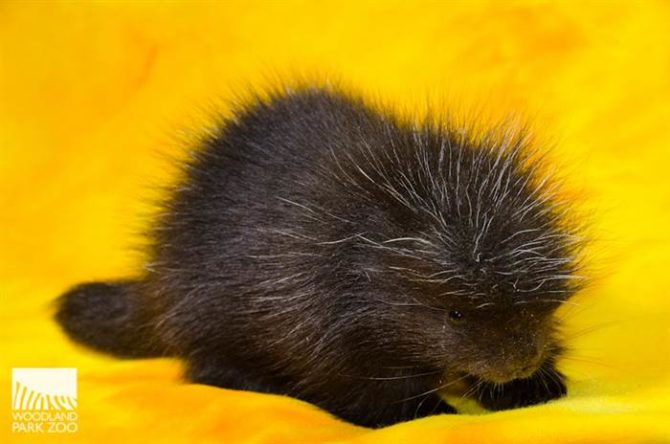 4. Bibliotherapy is actually a thing.

According to this article in The New Yorker, bibliotherapy “is a very broad term for the ancient practice of encouraging reading for therapeutic effect,” and the term itself dates back to 1916. Like all readers, I’ve relied heavily on books to get me through some difficult times, but I had no idea there was a term for this. Apparently there are book-centered support groups, one-on-one book therapy sessions, and a network of trained bibliotherapists working around the world. I would love to see a bibliotherapist for a session, or maybe even become a bibliotherapist myself.

5. The Intuitive part of my INFJ personality is constantly at war with internal and external pressures to be a Sensor.

(This is really getting into the weeds with Myers-Briggs stuff, but hang in there with me!) As an Intuitive (N), I am good with metaphors, reading between the lines, and big picture sorts of things. The attributes of Sensor (S) types, like paying attention to the facts and details of my present reality, are not my strong suit. However, about 75% of people in the United States are Sensors, which means that Sensing is the favored tendency in our culture. It also the favored tendency of my OCD, which drives me to hyper-focus on physical details. Not only does this go against my natural bent, but it makes me frustrated that I can’t just “think normally.” I’m not sure why it took me so long to have this “aha” moment about my type, but now that I am aware of it, I hope to make my strengths work for me rather than allowing my weaknesses to be my nemeses.

6. For a toddler, the simple things in life bring the most pleasure.

Charleston has tons of toys and gets to do lots of fun activities, but it’s the little things like playing with my makeup bag or constantly rereading a greeting card that make him happiest. His recent favorite pastime is riding in elevators. We have one at our gym, and he insists on going for a joy ride every time we are there. It literally only takes a minute to ride up to the second floor and come back down, but that minute is truly the highlight of his day. 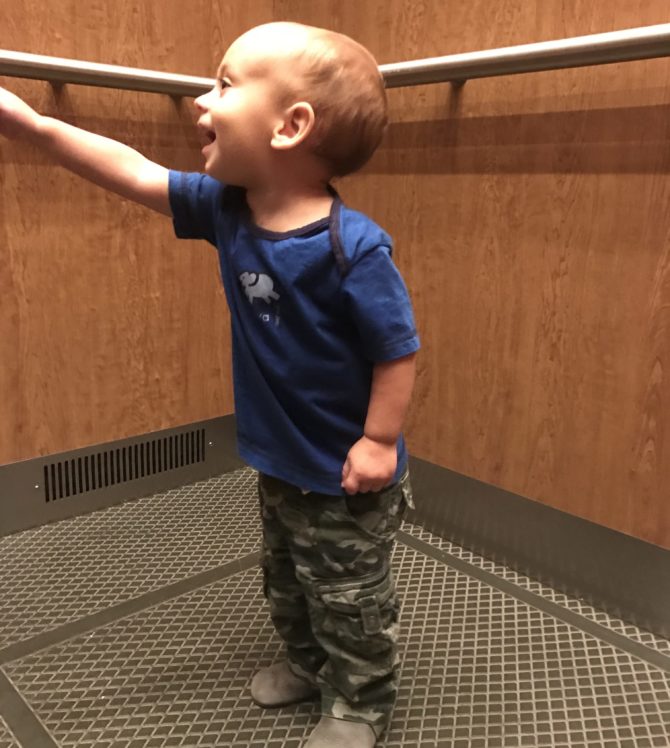 7. Waiting until November to schedule a family photo shoot in time for Christmas card pictures is a bad idea.

I let time get away with me this year, and before I knew it, Halloween had passed and I hadn’t lined up a photographer. A friend was able to refer me to a local gal who graciously found time in her schedule to fit us in (and even rescheduled us due to forecasted rain). We picked out outfits and scheduled haircuts and were all ready for our shoot. . . and the night before it was scheduled, I got a text from the photographer saying that her camera had had a disastrous run-in with her child and she would have to cancel. Miraculously, a photographer friend of hers was able to take over our session and it all worked out. The pictures turned out great, and we received them just in time to catch a Black Friday deal on our cards. But note to next-year Kendra: do not cut it this close again!

8. Shopping for a Thanksgiving turkey is oddly complicated.

For us, turkey on Thanksgiving is nonnegotiable, but since this was our first year doing Thanksgiving on our own, it was up to me to make sure that turkey made its way to our table. As I scouted out my options at HEB, I realized that purchasing a turkey was not as straightforward as I’d assumed. Did I want precooked or frozen? Prepared turkey dinner or turkey by itself? Whole turkey or turkey breast? I ended up going with an 11-pound precooked turkey that just needed a few hours in the oven once it came home. It was absolutely delicious, we were happy to have lots of leftover meat, and I feel zero need to cook my own turkey in the future.

9. Dumbo was the first Disney animated feature set in America.

10. Goodreads can help me get the most out of my audiobook experiences.

I love audiobooks, but I’m a visual person and sometimes find myself getting lost with audio narration. Enter Goodreads: I recently discovered that the app lets you preview the first several pages of most books. With my last few audiobooks, I’ve read along with the first chapter to help orient myself before listening to the rest of the book. With fiction books, this helps solidify the characters and setting in my mind, and with nonfiction, I am able to look at the Table of Contents which gives me a framework for tracking with the rest of the book’s content.

11. The presidential election really brought out the worst in people.

This election was indeed a fraught one and I think that many of us were disappointed by both of the leading candidates. However, I was shocked by the discourteousness and downright appalling interactions I saw taking place on social media, from people (including friends) on both ends of the political spectrum. I grew more and more disillusioned as the election approached, and even more so after the results were in. I chose to stay silent, largely because nothing I contributed would add to the conversations being had. I knew that my words would likely offend someone, and for me, it wasn’t worth compromising friendships or jeopardizing my Christian witness. I’m thankful for our freedom in this country to express our opinions, and I’m also thankful for God’s guidance in helping me know when to keep my own opinions to myself.

12. The election also brought out the best in me.

Disappointment with all-things election prompted me to be intentional with my own response. Where do I go from here? How can I transfer the emotion of election day into something productive and meaningful? Amidst the buzz surrounding the election, politics were at the forefront of my mind, but I’m realizing that I should be staying abreast of these issues all the time and not just during election season. I am committing to staying better informed about the state of affairs on global, national, and local fronts. For the first time, I am open to the possibility of running for local office (or supporting Luke if he chooses to do so). And I am spending more time praying for our leaders. Most importantly, I am recognizing that the biggest difference I can make is right where I am: in myself, my family, and people in my life who I know and love. 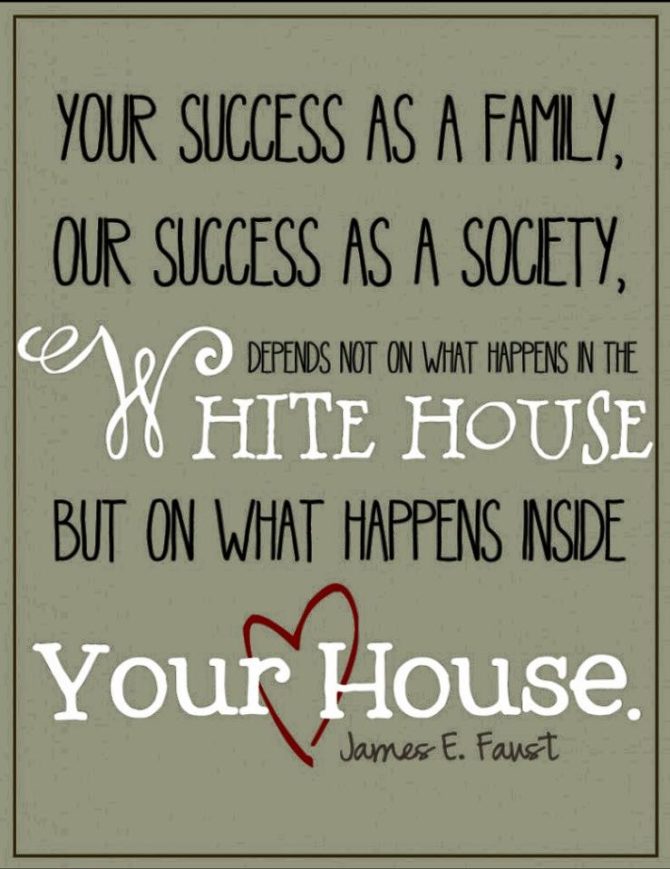 I’m linking up with Emily P. Freeman to share what we learned this season!