2016 Reading Challenge: A book currently on the bestseller list.

Despite my immense love of books, I have a hard time spending a lot of money on my reading habit. I tend to rely on the library and occasional purchases of discounted books to keep my nightstand and Kindle adequately stocked. One downside to my system is that I rarely read books when they are first released; by the time a book becomes available at the library or can be purchased at a discounted price, all buzz surrounding the book has died down and the rest of the world has moved onto something new. 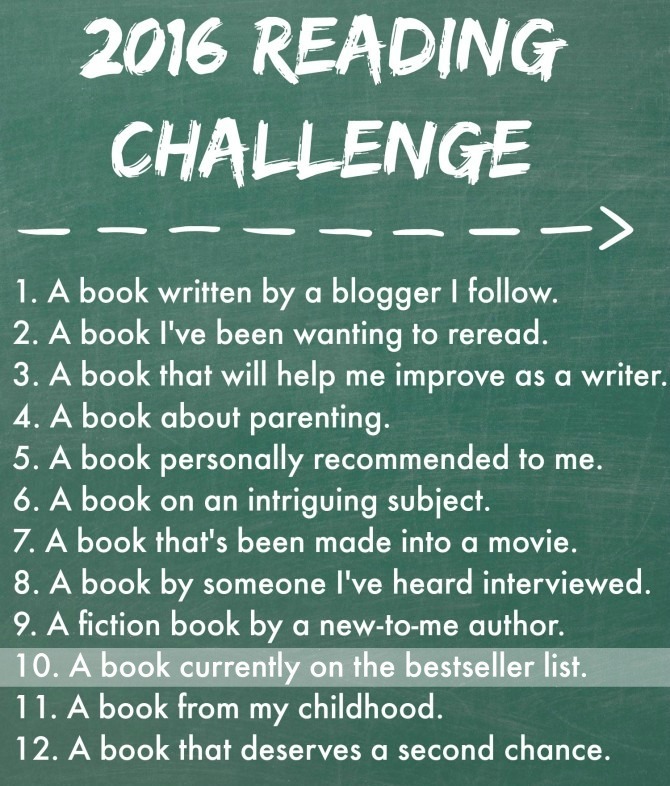 To prompt myself to read at least one book this year while it was still in the spotlight, I decided to include “a book currently on the bestseller list” in my 2016 Reading Challenge. While apparently straightforward, this category is actually quite broad: there are many sources of bestseller lists (New York Times, Amazon, Barnes & Nobel. . .) and each offers multiple lists (fiction, nonfiction, hardcover, paper. . . not to mention lists for each genre). I decided to limit my choices to books from the New York Times Hardcover Fiction list. I further whittled down my options by choosing to ignore “flash-in-the-pan” books, which is how I refer to books (like the latest James Patterson thriller) that debut in the top position but immediately fall off the list, and out of the forefronts of readers’ minds. I wanted my choice to be a novel with more staying power, one that was receiving a decent amount of attention and had spent more than a couple of weeks on the list.

I eventually settled on A Gentleman in Moscow. After its release in September, the book spent several weeks on the bestseller list and garnered quite a bit of attention within literary circles. Though it has since fallen out of the Times’ Top 20, it was still on the list when I read it. I know I would have read this title eventually, but my challenge gave me the nudge I needed to read the book while it was still hot off the press. 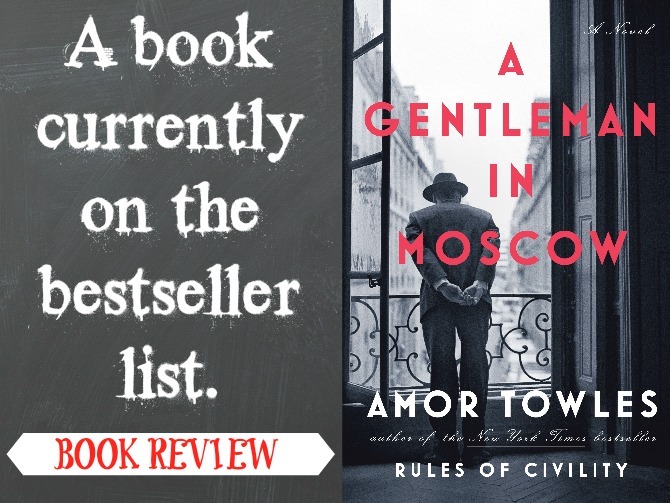 I read and was blown away by Amor Towles’ first book, Rules of Civility, just a few months ago. I was skeptical that A Gentleman In Moscow could live up to its predecessor but I was immediately proven wrong; Towles’ latest book is just as good, if not better!

Whereas Rules of Civility takes place in New York over a single year, A Gentleman in Moscow is set in Russia and spans decades. But despite these differences, the two books share much in common. Like Rules of Civility, this novel features Towles’ phenomenal storytelling and creative plot structure and touches on many of the same themes—most notably, the ways in which a singular event has the power to significantly alter the trajectory of one’s life. 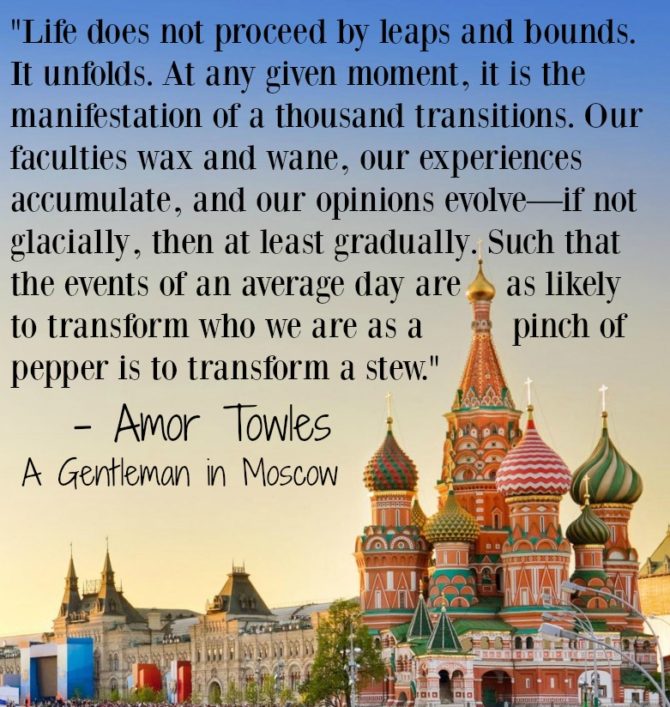 A Gentleman in Moscow tells the story of Count Alexander Rostov, one of the most endearing and memorable characters I’ve encountered in literature. In 1922, the Count is convicted by the Bolshevik tribunal for being an “unrepentant aristocrat” and sentenced to a lifetime of house arrest in the Metropol, a grand hotel located across the street from the Kremlin. The Count refuses to let his imprisonment put a damper on his humor, his zest for life, or his sense of propriety.

The Count makes the most of his captivity, continuing to pursue life’s smallest pleasures and forging new relationships with the hotel staff and guests, who include government dignitaries, Hollywood stars, political revolutionists, and a precocious young girl whose friendship transforms him. From his relatively small—albeit luxurious—prison, the Count manages to keep his finger on the pulse of Russia and the world at large, and through his experiences we, the reader, are entertained, inspired, and educated on an important time in history.

A Gentleman in Moscow has something for every reader: the book is brimming with humor—both blatant and more veiled—and filled with page after page of vibrant, sensory prose, powerful insights, and enlightening political discussions. It is not an easy read: some passages move slowly, and I had a hard time with the Russian names and historical references. But this layered and nuanced novel is worth the intellectual investment, and it has solidified Amor Towles’ status as one of my favorite authors of our day. 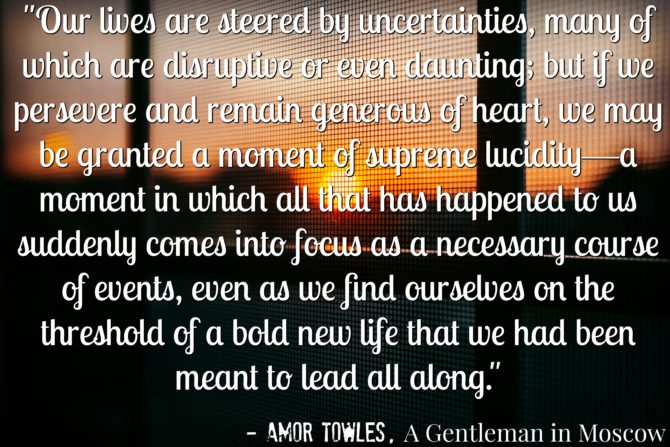 Though I didn’t specifically read them to satisfy this category, some fortunate timing with library holds allowed me to read quite a few current and/or recent bestsellers in the last few weeks. My reviews of three of them—including The Woman in Cabin 10, The Underground Railroad, and A Great Reckoning—are in last Monday’s Reading Wrap-Up. Below are five other books I considered reading for this category, along with excerpts from the publishers’ descriptions.

The Mothers, by Brit Bennet: “In entrancing, lyrical prose, The Mothers asks whether a ‘what if’ can be more powerful than an experience itself. If, as time passes, we must always live in servitude to the decisions of our younger selves, to the communities that have parented us, and to the decisions we make that shape our lives forever.”

The Whistler, by John Grisham: “We expect our judges to be honest and wise. Their integrity and impartiality are the bedrock of the entire judicial system. We trust them to ensure fair trials, to protect the rights of all litigants, to punish those who do wrong, and to oversee the orderly and efficient flow of justice. But what happens when a judge bends the law or takes a bribe? It’s rare, but it happens.” I’ve read every one of Grisham’s books and his recent interview on The Moment podcast has me particularly excited about his latest release.

Commonwealth, by Anne Patchett: “Told with equal measures of humor and heartbreak, Commonwealth is a meditation on inspiration, interpretation, and the ownership of stories. It is a brilliant and tender tale of the far-reaching ties of love and responsibility that bind us together.” I’ve been eager to read an Anne Patchett novel; this just might be my first!

Today Will Be Different, by Maria Semple: “Today Will Be Different is a hilarious, heart-filled story about reinvention, sisterhood, and how sometimes it takes facing up to our former selves to truly begin living.” If this is anything like Where’d You Go, Bernadette, I know I will love it! 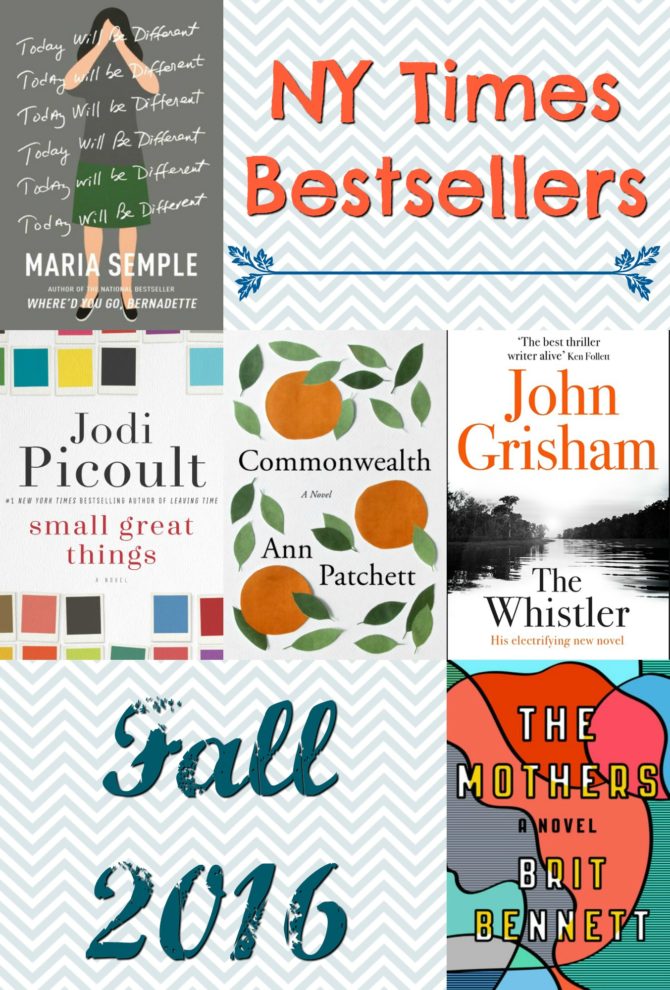