What I Learned in My First Trimester

It’s hard to believe that I’ve been at this blogging thing for almost a year now! If you’ve been reading my blog for a while, you know that I like to wrap up each month by sharing a few things I’ve learned over the past four weeks. This month, instead of sharing what I learned in the month of July, I thought I’d share a few things I learned during the first trimester of my pregnancy. It’s been so hard to keep from spilling our news to all of you over the last couple months, and now that the cat’s out of the bag (though the bun is still safely in the oven!), I’m excited to share a bit of our first-trimester journey! Here are a few lessons – the good, the bad, and the ugly – that I learned in my first three months of pregnancy. 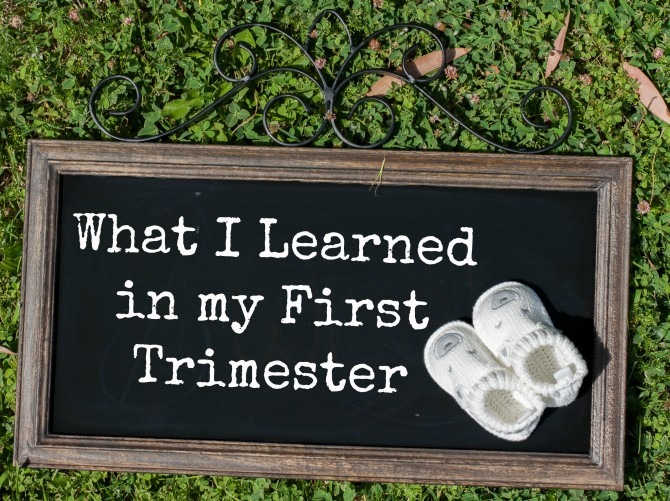 1. Perhaps the biggest lesson I’ve learned this trimester is that parenting is highly anxiety-producing, even when it’s just beginning! From the moment I found out that I was pregnant, I was terrified of having another miscarriage. For the first week of my pregnancy I lived in a constant state of panic that was so overwhelming, I could barely get out of bed. I kept thinking that I would feel better once we had our first ultrasound, or once I reached my second trimester, or once the baby arrived. . . . I finally came to the realization that I will likely be worried about this child, to some extent, for the REST OF MY LIFE, and that my anxieties would consume me if I didn’t give them up to God. I turned to prayer, knowing that God loves this child more than I ever could, and that He will be there for me AND my baby regardless of what happens in his/her life. I haven’t stopped worrying altogether, but I definitely feel much more peace knowing that my baby is in God’s capable hands.

2. Doctors can be wrong, and miracles CAN happen. When we had our first ultrasound at six weeks, the baby’s heartbeat was very slow (only 98 BPM), and our obstetrician gave us the worst news an expectant parent can hear: that our pregnancy was likely to end in miscarriage. We left the doctor’s office in tears, devastated at the prospect of losing another baby. However, all of my follow-up bloodwork looked positive, and an ultrasound the following week revealed that the baby was growing at a steady rate and that its heartbeat had picked up to a healthy pace. I cannot begin to express the feelings of gratitude and relief that washed over me when the ultrasound tech told us everything was going to be just fine.

3. The galloping sound of an unborn baby’s heartbeat is one of the most exciting sounds in the world. And after our initial scare, it is a sound that I now know should never be taken for granted.

4. I learned the hard way that sonograms should NOT be laminated. Because the pictures we received from our ultrasound tech were so flimsy, I decided that it would be a good idea to laminate them before putting them in our baby book. I took the sonograms from our first two ultrasounds to Staples and excitedly handed them over to the young girl behind the counter. A few minutes later, she came over to show me the sonograms, and asked if they had been so black before they had been laminated. I tried to hold back my tears as I told her that no, they had definitely held visible images pre-lamination. The sweet employee tried to rescue those poor sonograms by removing the lamination, but this only made things worse; the images were still blacked out, and now they were furled and torn. I could tell the girl felt horrible – the tears streaming down my face probably didn’t help – and I tried to reassure her that it wasn’t her fault, and I should have known better. Fortunately, Luke had scanned the sonograms before I went to have them laminated, so all is not lost, but I definitely left Staples feeling like I was completely failing as a mother. Yet another emotion I’m sure I’ll experience quite a bit more of in the coming years.

5. All those pregnancy symptoms that my pre-pregnant self was skeptical of in my pregnant friends? As much as I would have liked them to be a figment of their imaginations, I now know that they are very real. Nausea, fatigue, headaches, back pain – I WISH I was making these things up! At least they are constant reminders that my baby is healthy and happy.

6. On a related note, I’ve discovered that there is a wide world of smells that was going undetected by my pre-pregnant nose. Most of them are not very nice smells. I had no idea that my refrigerator, carpets, and even my own skin had such pungent odors. (I’m really hoping that last one is just my sensitive nose, and isn’t being detected by everyone around me; I’ve taken to bathing multiple times per day, though, just in case!)

7.  I learned that it is possible to have very strong aversions to particular foods, and even to all food in general. When I was in treatment for my eating disorder, I refused to believe the girls who claimed that they didn’t like food; I just didn’t think that was possible: I might not have wanted to eat the food that was given me because I didn’t want to gain weight, but I have always enjoyed food itself. . . until I got pregnant, and even all of my usual favorites (popcorn, frozen yogurt, smoothies, and roasted vegetables, to name a few) suddenly seemed disgusting. My food aversions are very slowly starting to subside, but I now have a deeper understanding – and compassion – for those who literally have a hard time stomaching food.

8. For me, pregnancy cravings thus far have had little to do with what I am wanting to eat, and everything to do with what I’ve been able to tolerate. My diet has largely consisted of popsicles, soup, rice bowls with LOTS of hot sauce, and bread (hence my newfound obsession with Canyon Bakehouse). The only food that I’ve had a strong craving for has been sushi, which is strange because I very rarely eat sushi when I’m not pregnant. Unfortunately this is one craving I’ll have to wait to indulge until the baby comes. Our baby is due two days before Luke’s birthday, and Luke has promised me that if the baby comes on time, we can celebrate his birthday with sushi – I can’t wait!

9. There are lots of great pregnancy apps, but nothing beats a physical book. I first discovered this book at the library, and liked it so much that I ended up ordering myself a copy on Amazon. It’s awesome to read about and see pictures of the baby’s development for every day of my pregnancy, and not just each week. 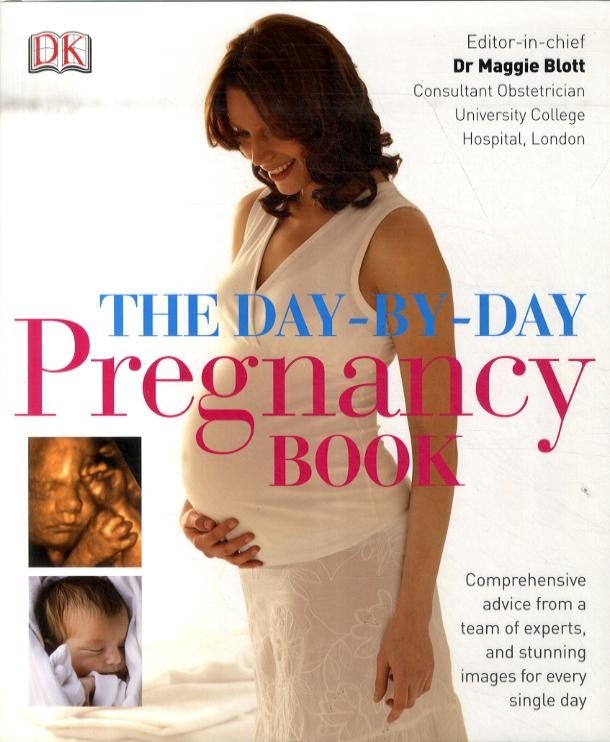 10. It’s okay to challenge the status quo and to explore your alternatives when it comes to prenatal treatment and birth options. I’ve known for a while now that I wanted to have a natural birth, preferably with a midwife and possibly at home, but when we got pregnant, it was just easiest to see the obstetrician referred to us by my primary physician. Though we were quite happy with our actual doctor, our first several appointments confirmed that the clinical setting wasn’t for me. We had heard good things about a local birthing center, and after going to check it out, I immediately knew that that was where I wanted to give birth. The setting was serene and friendly, and the midwives and other staff alleviated any remaining fears I had about having a non-hospital birth. I am thrilled with our decision to go the natural route – hopefully I feel the same way in six months when I’m pushing out a baby without an epidural!

11. It takes a bit for a baby belly to appear. I naively thought I would start showing sooner, so we began taking weekly belly pictures at seven weeks, just to make sure we didn’t miss anything. The first several pictures were definitely anticlimactic, but at eleven weeks, an actual (non-bloat) belly started to appear, and Luke joked that it no longer felt like our pictures were fraudulent. 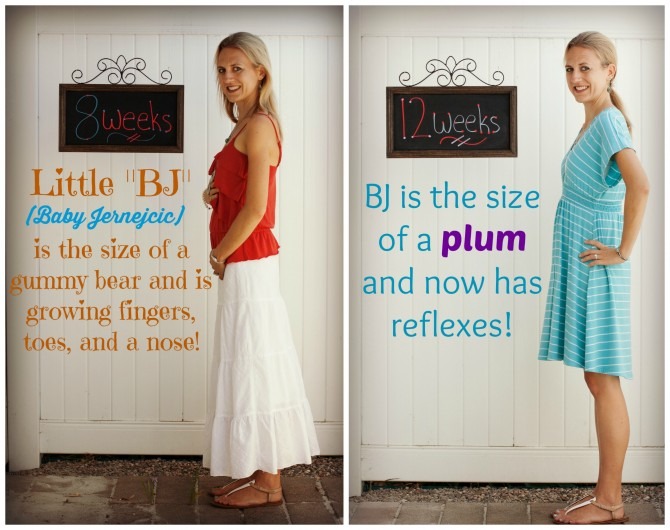 12. There are differing opinions regarding when the first trimester officially ends. I’ve read everything from 12 weeks to 14 weeks. I’m choosing to celebrate the 13-week mark (today) as the beginning of trimester #2!

13. These past few months have confirmed something I’ve long known about myself: I’m terrible at keeping secrets! I was able to make it to twelve weeks before announcing our pregnancy here on the blog, and on social media, but I couldn’t keep from sharing our news with almost everyone who crossed my path in real life – from family and friends, to the cashier at Flame Broiler! I’m so glad that I don’t have to try to keep the secret any longer!