The silence should have tipped me off to the fact that something was amiss. Every parent knows that a mysteriously quiet child is sleeping, sick, or up to no good. But to be honest, I was too exhausted to notice or care.

Charleston and I were less than thirty minutes into our morning, and already we had endured one meltdown, two power struggles, and more hurt feelings than I cared to count. So when my (reluctantly) dressed and combed child left my bedroom in a huff (presumably to play in his room), I took advantage of the momentary respite to get myself ready for the day.

When I emerged from my bathroom twenty minutes later, I felt like a new woman: teeth had been brushed, hair was straightened, and the morning’s bad mood had melted away. I was ready to tackle the day and went in search of Charleston to bring him downstairs for breakfast. 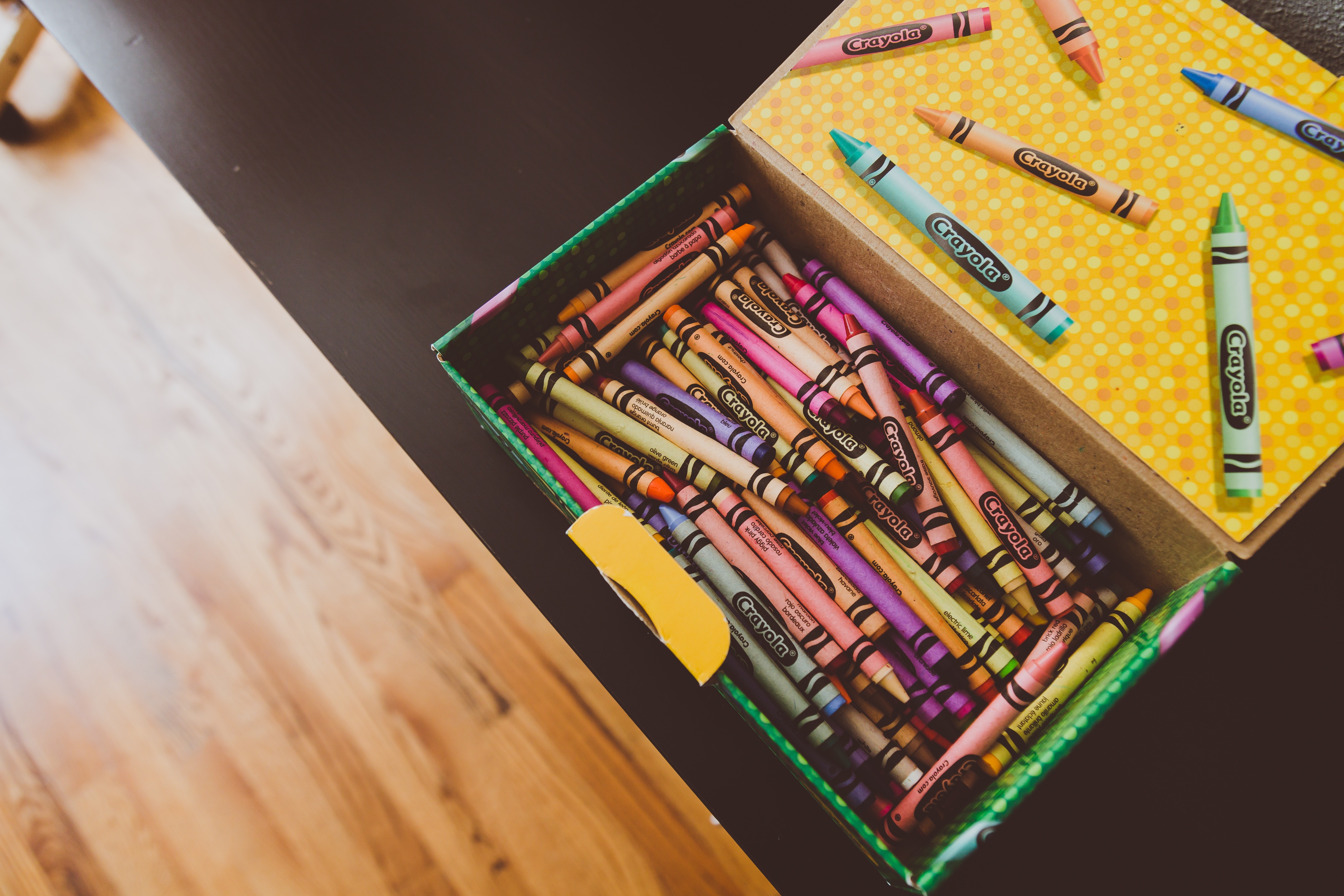 And there he was, sitting in my chair, coloring something at the desk. He looked up at me, guilty, then turned back to his ferocious penmanship. The dread increased, my stomach clenched, my veins turned to ice. Reluctantly, I peered over his shoulder to take in the object of his artistic endeavors.

My worst fears were confirmed. There, splayed open and adorned in a rainbow of 3-year-old scribblings, was my planner/ bullet journal. The journal I had poured far too many hours of perfectionistic efforts into making pristine. The ONE of my countless journals that I have strived to keep orderly and unblemished. The journal that was now, for all intents and purposes, utterly destroyed.

I can hardly bear to tell you what happened next, but for the sake of the story, I must. In a flurry of rage, I looked into my darling, sweet, angelic child’s face and I began to yell. The words poured out of me faster than I could get ahold of what I was saying. Horrible, vindictive, shaming words. And they kept spewing from my mouth until my son’s little lip began to quiver and his eyes welled up with tears. Only then did I see that he felt remorse for what he had done. Only then did I feel he had been adequately chastised for the wrongs he had committed.

Verbal annihilation complete, I picked up Charleston and moved him to time out so he could cry someplace where I didn’t have to hear him. Then I returned to the office to further inspect the damage. I have to give him full credit for thoroughness; hardly a page had been left unmarked. Including the first page, where—just three months earlier—I had boldly written the words, “Year of Grace.” 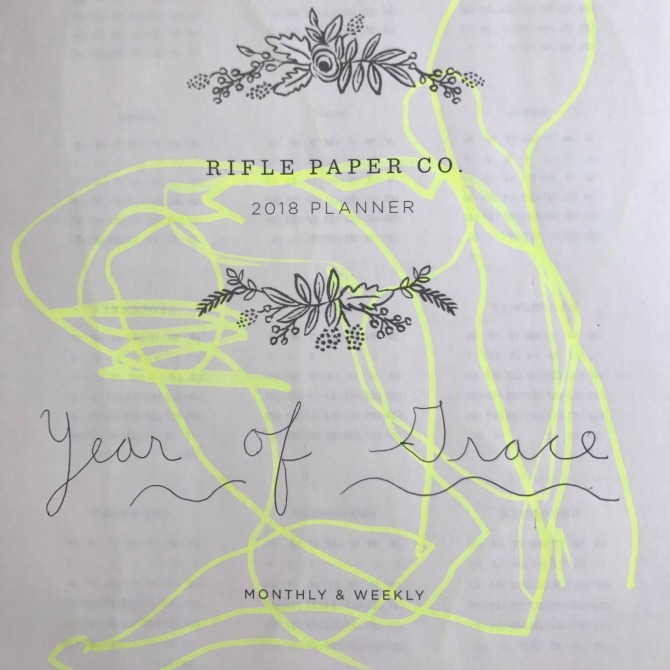 At that point, my own tears began to fall. There was no question that my son had done something wrong. But in the grand scheme of things, it was such a small act. How could I withhold grace from him in this moment? Especially with full knowledge of the copious amounts of grace I—someone who fails on a daily, hourly, minute-by-minute basis—have received?

That day proved to be one dominated by grace. I immediately went into the room where Charleston was serving his penance and I wrapped him in my arms. I was still furious—and there would still be consequences for his actions, discussed (in a calmer moment) with Daddy when he got home—but in that moment, I set my anger aside and told him that I loved him, that I forgave him for what he had done. And I apologized, profusely, for my unjustified reaction.

The theme of grace continued later that day, when I confessed my outburst to Luke. He did not shame me for my yelling or petty behavior. He hugged me and acknowledged that parenting is hard, that we all mess up. He offered me the forgiveness that I was having difficulty giving to myself.

And it has to myself that I have had the most difficulty offering grace. I am ashamed of my rash behavior, of my quickness to prioritize a physical item over my own child’s sensitive spirit. I am ashamed of yelling—something I almost never do—over something so inconsequential. Yes, Charleston knew that he was doing something wrong, but it could have been SO MUCH WORSE! And even the worst thing he could do would pale in comparison to the things that could happen to him. When I first caught him coloring my journal, the thought rolling through my head was, “this is an OCD worst nightmare.” But my true worst nightmare, one that terrifies me to even type, is something terrible happening to my child. And my treatment of Charleston in that moment WAS something terrible, and something I hope never to repeat. 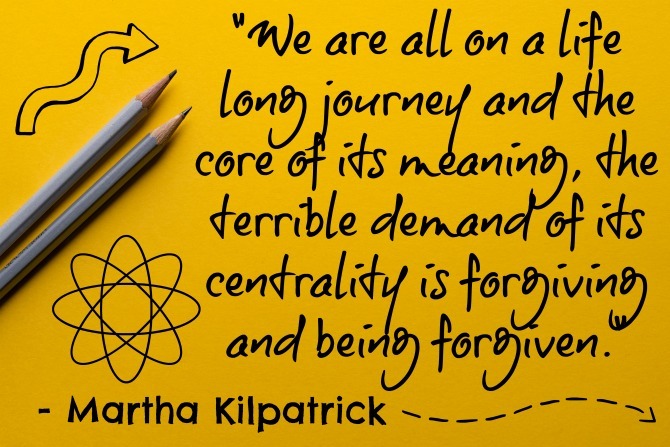 A month has passed since the journal incident, but not a day has gone by that I haven’t thought about it in some way. I’ve kept the journal, and continue to use it to document my life; it’s tempting to try to ignore the scribblings, to act as though they aren’t there, that the entire event did not happen. But I force myself too look at them and remember. Because it is a moment I want to learn from, and thereby redeem.

My therapist has helped me find some good that came from the moment. She pointed out that, while I did yell (something I am not at all proud of), I did not physically harm Charleston in any way.* Next time something like this happens—and there will undoubtedly be a next time—I can trust that I will once again be able to show (at least some) restraint. She also commented on the fact that I was quick to apologize, providing Charleston with an example of how to respond when we have acted inappropriately. These bright spots are helping me begin to forgive myself for what at first seemed unforgivable.

Charleston and I have had many conversations about that moment. We’ve talked about the lessons he learned (not touching Mama’s things without permission) and the ones I’ve learned (not responding in anger, using kind words instead of harsh ones, caring more about people than things). Part of me hopes that he will forget about this when he is older. But if he remembers, I hope that he can look back and see the beauty through the pain.

In 2017, my word for the year was LOVE, and God used that theme in some powerful and unexpected ways. He is doing the same for me during this year of Grace. I’m excited, and also a little terrified, to see what comes next. 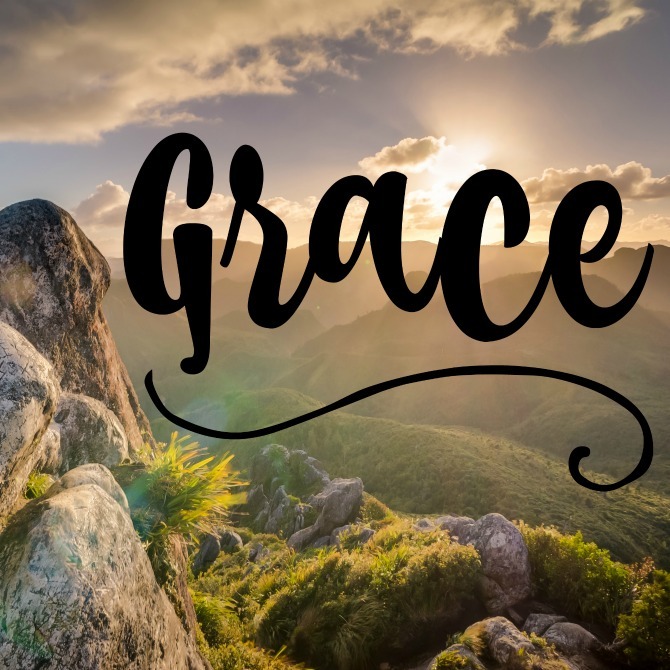 *I am not in any way criticizing parents who choose to use physical punishment, such as spanking, as a discipline tool, but it is one that Luke and I have decided against for our family at this time.