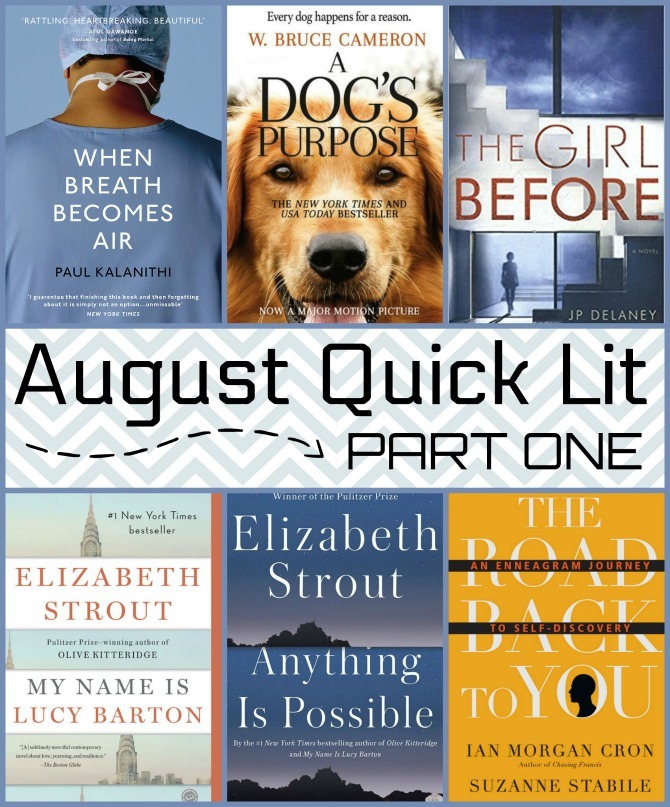 A Dog’s Purpose, by W. Bruce Cameron: I love a good animal story (don’t we all?) and this one is a delight! The story is told in the voice of a dog who goes by many names, and who takes many forms, but maintains the same joyous spirit as he journeys through many different lives. With each reincarnation he makes new friends and realizes a new purpose for his life, whether it’s offering comfort as a rescued stray, being a friend to an adolescent boy, or saving lives as a police dog.

Heartwarming and humorous, A Dog’s Purpose perfectly captures the canine persona in a way that is human enough to convey a story, but also so dog-like that I almost believed the book was written by a four-legged furball. From the very first lines of a puppy awakening to the presence of his squirming siblings, each emotion, attitude, instinct, and observation is exactly how I would imagine a dog to think or feel. Through the eyes of our canine narrator we receive a dog’s-eye commentary on the meaning of life, the bond between man and animal, and the power of a love that transcends life itself. After reading this book, I will never look at a dog the same way again! 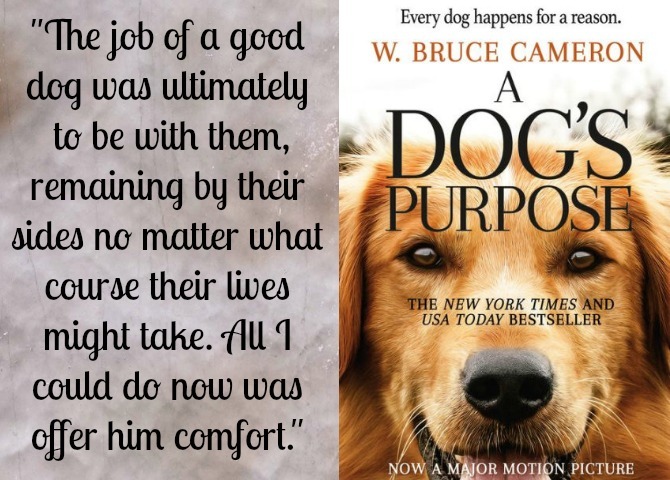 The Road Back to You: An Enneagram Journey to Self-Discovery, by Ian Morgan Cron and Suzanne Stabile: I’ve read a lot about the Enneagram model of personality (and even dedicated a post to the subject), but I’m always looking to learn more! I’ve been enjoying The Road Back to You podcast since its beginning and have been excited to read the book, but was waiting for an Amazon sale to press purchase. I finally got tired of waiting and paid full price—something I almost never do!

Like most Enneagram books, this one begins with a brief introduction to the model, followed by chapters dedicated to each type. The book is highly readable and not at all clinical, as some personality books can be. The authors use detailed stories and humor to describe the characteristics of each number, and they include explanations of how the types show up as children, at work, and in relationships. I found the explanation of each type’s wings and stress and security numbers particularly helpful, since these points aren’t covered in many Enneagram explanations. I also found the paths for transformation (type-specific ideas for self improvement) to be incredibly beneficial and a good reminder of how studying the Enneagram can help us become better versions of our true selves.

As someone who is well-versed in the Enneagram, I still had many great takeaways about my own type and the types of family members and friends. (I stopped counting how many times I thought “that makes SO much sense” when reading about Luke’s type [6]). But the book isn’t just for enthusiasts like myself; it would also be a great introduction for someone new to the model. It’s not a perfect book, though. The type descriptions are so detailed that they don’t allow for much nuance within each type. (For example, in reading about Type 1’s, I found myself second-guessing my number because not every aspect of this type applies to me.) One other caveat with this book is the included descriptions of types as they appear as children; most Enneagram experts warn against trying to find out your type until you are at least 30, so I’m wary of any attempts to put a child’s personality in a box.

These small complaints aside, I loved this book and have happily shared portions of it with many of my fellow Enneagram-loving friends! 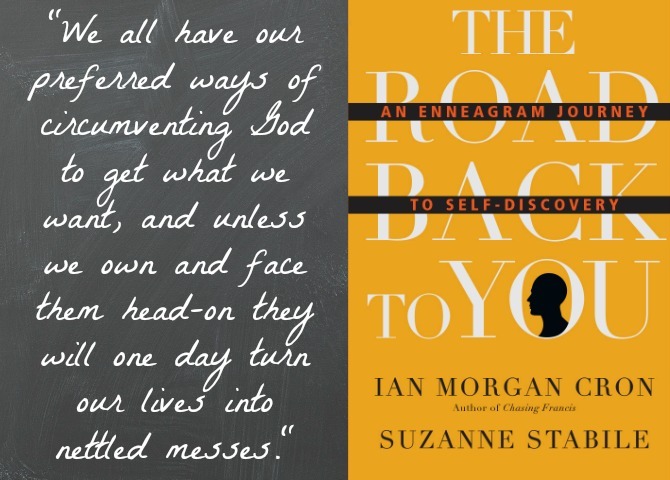 The Girl Before, by J.P. Delaney: The Girl Before layers the stories of two remarkably similar women facing an identical situation. In the present, Jane is suffering from a personal tragedy and looking for a new start when she is presented with a rental opportunity of a lifetime: the chance to live in One Folgate Street, an architectural masterpiece with a minimalist design, state-of-the-art amenities. . . and an eccentric landlord who requires his tenants to relinquish all of their personal belongings and abide by 200 strict house rules. As she settles in, Jane begins to uncover the story of a previous tenant, Emma, who had lived in the house after experiencing a tragedy of her own, and who had suffered a mysterious and untimely death. In back-and-forth narration between the two protagonists, we learn that both women were increasingly overpowered by the house itself and by its manipulative designer who wants more than just a landlord/tenant relationship.

The story itself did not disappoint: it is fast-paced and loaded with suspense as well as numerous twists that kept me guessing until the end. And while I was skeptical of the actions and motivations of nearly every character, I still found it intriguing (albeit repulsive) to get a glimpse into the mind of a (potential) sociopath and those who give in to or even feed off of this behavior. Final verdict: highly readable, but not at all my cup of tea. 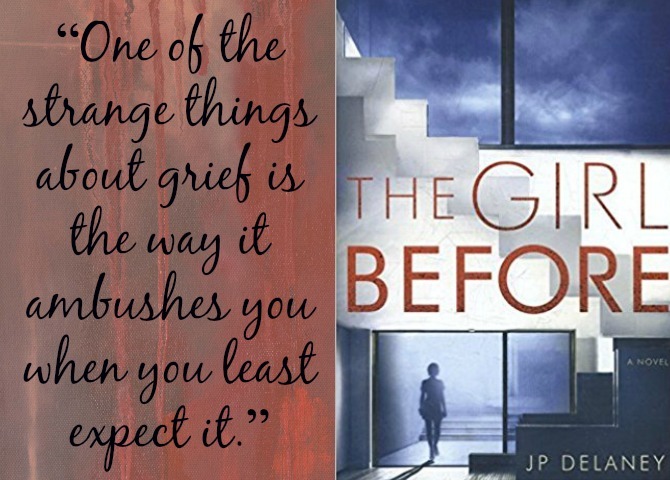 When Breath Becomes Air, by Paul Kalanithi: Death is something we all experience—peripherally always, and then, eventually, first hand. Yet it’s not a subject we spend much time thinking or reading about; at least I don’t. Perhaps we should. And what better guide into this delicate topic than someone who has witnessed death in a professional capacity and then, slowly and painfully, in himself.

This brief memoir chronicles the life of Paul Kalanithi, a neurosurgeon who was in his mid-30s when he was diagnosed with stage IV lung cancer. As Kalanithi makes the awkward and painful transition from doctor to patient, he begins to ponder life’s biggest questions: What makes a life worth living, particularly when that life is destined to be cut short? What are the best ways to compassionately assist others in the dying process? How do we die gracefully ourselves, and how can we make the most of the time we still have? Kalanithi also begins viewing his own career differently, feeling the gravity of his position more deeply than ever.

Much of this book is dedicated to medical-based discussions of Kalanithi’s career and his specific diagnosis. Not being a science person myself, these portions of the book were of little interest to me, or I found them disturbingly graphic/sad. However, the facts of Kalanithi’s life and death are interspersed with poignant discussions and philosophical musings that made the remainder of the book a worthwhile read. I was particularly intrigued by his thoughts on the intersection of science and the arts—of biology, literature, and philosophy—and how they converge to enhance understanding of each other and add meaning to life itself. And it was fascinating/terrifying to think about how we hand our futures over to medical professionals, and what that means for us and them. This is a must read for every doctor AND those who have been treated by one (which is all of us).

The ending of this memoir feels abrupt because Kalanithi died before it was finished. The afterword, written by his wife, is beautifully touching and was by far the most moving part of the book. Her words are proof that, though her husband’s life was too short, it was saturated with purpose and meaning, much like his book. 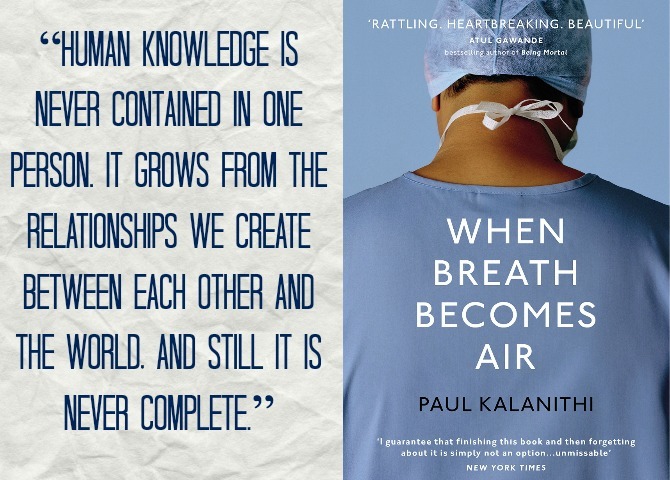 Anything Is Possible, by Elizabeth Strout:  Though I read it just last year, I couldn’t remember much about My Name is Lucy Barton other than the fact that I didn’t love it as much as everyone else seemed to. In my original review of the book I wrote, “I would have enjoyed this more if the essay-style vignettes and sketched characters had been fully fleshed out.“ Elizabeth Strout must have agreed, because that’s exactly what this book is: a collection of short stories exploring the lives of characters touched upon in Lucy Barton, including one story involving Lucy herself. From an elderly former janitor who demonstrates astounding compassion, to a mother and daughter who reunite after years of misunderstanding, the characters are unique, slightly humorous, lifelike, and memorable.

This is a quiet book but a powerful one. As I’ve gotten older, I’ve become more aware of how little I understand about the world and the people in it. Reading allows me to see it all a bit more clearly, lending words to the ideas and emotions that were hazy and unarticulated in my own mind. With the stories in this book, Elizabeth Strout has given clarity to the cycles and circles of life, helping her readers to make peace with the fact that our stories are always unfolding. Because of this, we are never able to know the full scope of someone else’s story, or even our own. This fluidity also means that anything is possible, and that even the most broken lives can be redeemed. Not every story in this collection has a picture-perfect ending, but all of them feature some semblance of redemption.

I enjoyed seeing characters from previous stories make cameo appearances in later ones. For this reason I wouldn’t recommend the audiobook: I actually did listen to it, and though the narrator was very good, I would have liked to be able to refer back to the earlier stories (easier in paper or on kindle than in audio). 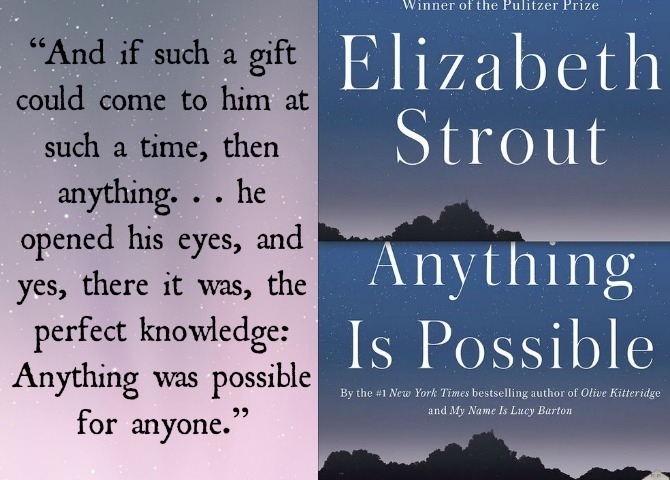 In the book, the narrator (a successful author writing about a long-ago hospital stay during which she reconnected with her estranged mother) says of a writing mentor “that her job as a writer of fiction was to report on the human condition, to tell us who we are and what we think and what we do.” Strout herself masters this with Lucy Barton. It’s true that the book doesn’t have much of a plot, and that the structure—made up of scraps of story, pieced together like a quilt—can be difficult to follow. But the character sketch of a broken woman, struggling to rise above an even more broken past, is simply remarkable; gut-wrenchingly heartbreaking, but so pure and simple and true. Strout amazed me with the ways she was able to capture the rawest, most primitive thoughts and emotions that most of us are too afraid or possibly unaware to acknowledge, let alone articulate. The narration is straightforward and not particularly eloquent, but this itself is an effective storytelling device and sets a distinctive and resonant tone.

I’m glad that I revisited this one after reading Anything Is Possible. It was interesting to see the snippets of characters whose lives are fleshed out in Anything Is Possible, and encouraging to know that their stories exist beyond the sad glimpses seen by Lucy and her mother. I also enjoyed spotting seeds of themes and emotions that are planted in My Name Is Lucy Barton and allowed to bloom in its sequel. I would highly recommend reading these back-to-back. 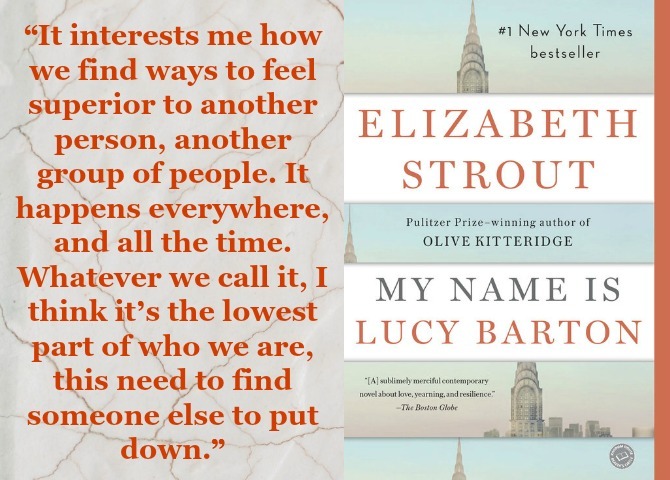 Have you read any of these books? I’d love to know your thoughts! On Monday I’ll be back with Part Two of my August Quick Lit, with six more books I’ve read this month. Until then, happy reading!