This post marks the two-year anniversary of my What I Learned posts! Back in January of 2014, I was inspired by Emily Freeman to write these monthly learning recaps, and since then I’ve enjoyed keeping an ongoing list of things that I’m learning, and then sharing those lists here with you. As a lifelong learner with a passion for teaching and sharing, these posts epitomize everything I love about blogging. Thank you for joining me in two years of sharing what I’ve learned!

For those of you who have been reading here for a while, you know that these lists can range from the obscure to the personal. My last couple of What I Learned lists have been on the introspective side of things, so this month’s list is pure fun (and by “fun,” I mean “heavy on the trivia”). Here is my totally random list of factoids, studies, and realizations that have crossed my path this January.

1. I might be sending off the wrong vibes with my texts.

Apparently, ending a text message with period makes it come across as cold and insincere, at least according to this study. I prefer to be grammatically correct with my texts, so if you have received a period-ending message from me, please know that it was sent with the deepest warmth and sincerity. . . I’m just kind of into punctuation.

2. The US Navy says that sit-ups are bad for you.

We’ve known for a while that sit-ups can cause lower back pain and that there are better methods for increasing core strength. Now the Navy is planning to revamp its biannual physical fitness test by replacing the outdated exercise with exercises that gauge the sort of strength and conditioning needed on the battlefield.

3. I’m part of the majority when it comes to my last name.

Only nine percent of American women keep their maiden names or hyphenate them with their husband’s last name when they marry. I never considered keeping my maiden name or hyphenating names; to me, that just seems confusing! I also don’t personally know any women who have chosen not to take their husband’s name, so this statistic is actually higher than I would have expected.

4. The number one reason that kids are bullied is for being fat.

I was never bullied as a child, but I do remember that the overweight kids in school were the ones who were teased the most. I’m sad (but not very surprised) to see that little has changed. 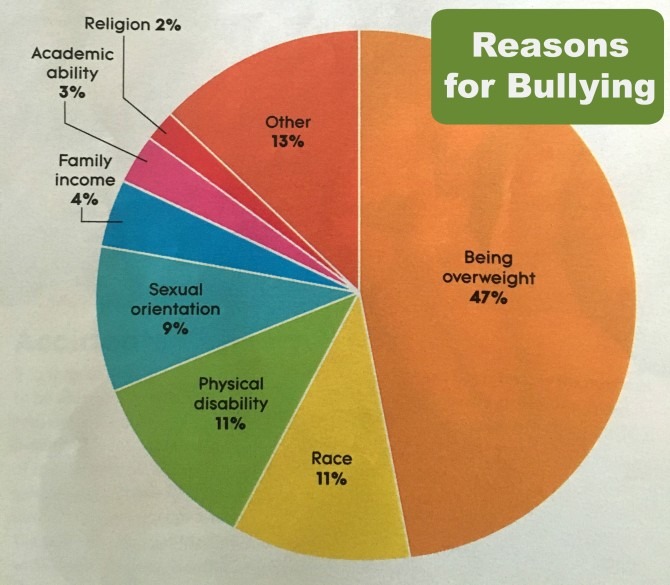 5. Walgreens has a photo center!

Despite the fact that I take dozens of pictures each day, I rarely have prints made. In the past, on the rare occasion when I did need prints, I ordered them on Shutterfly. This month I was thrilled to discover that you can order prints on the Walgreens website, and they are ready for pick up within the hour.  I am loving that I can save on shipping AND forgo the delay of waiting for my pictures to be delivered. Walgreens Photo even sells customized photo products like posters, cards, and gifts, and I used the service to have Thank You cards made after Charlie’s birthday party. I’m not sure how I didn’t know about this before, but I’m happy to have (finally) made this discovery.

6a. A Christmas birthday doesn’t limit your chances in life.

I’ve always thought it would be horrible to have a Christmas birthday, but even though December 25 is the least common birthday in the United States, a number of famous individuals were Christmas babies. The list includes Clara Barton, Conrad Hilton, Humphrey Bogart, and Isaac Newton.

6b. Some obsessions never change.

I just realized that I wrote about common birthdays in my very first What I Learned post!

7. Do one thing every day that can’t get undone.

I read this advice a few weeks ago from a blogger who has four young boys and finds herself in the endless cycle of laundry and meal prep and cleaning up after little ones and all other manner of mundane tasks. To help improve her daily outlook, she makes an effort to do at least one thing each day that will last, whether that’s creating something new, writing a blog post, or simply moving one step closer to a goal. I, too, have felt bogged down by the monotony of stay-at-home mommyood, so I am taking this advice to heart, and it has helped me to feel so much better about how I spend my days.

8. Breakfast cereal is due for a comeback.

When cereal was formulated at the turn of the 19th century, it was made to deliver to Americans their daily dose of fiber. For decades it served its purpose, but with the latest shift away from carbs, cereal consumption has rapidly declined in the US over the last ten years. As a result, Americans are not meeting the government recommendation to consume between 20 and 35 grams of fiber per day (the national average is just 16 grams). Reintroducing high-fiber cereals would provide an easy solution. 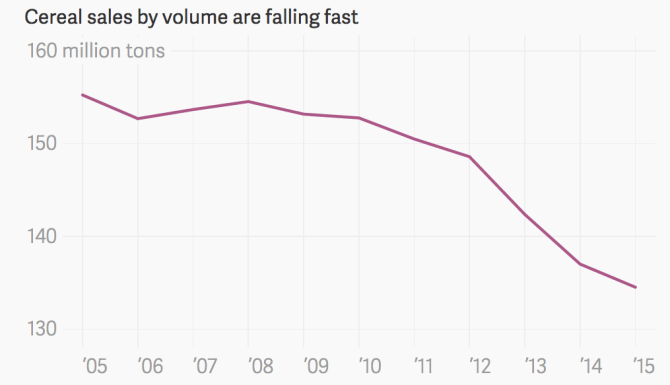 9. Procrastination is not a new phenomenon.

Human beings have been procrastinating for centuries. In fact, Greek philosphers had a special term for this form of acting outside of your better judgment: akrasia. One reason for akrasia is something called time inconsistency, which refers to the fact that we tend to value immediate rewards more highly than future rewards. I appreciated this article’s suggestions for combating procrastination. . . but I might put off trying them for just a bit longer. 😉

10. I’m in good company when it comes to tough mommy days.

A friend shared this awesome article on the 13 types of motherhood days, which includes everything from How Come She Has it All Together?” Days to Throw Out All the Parenting Book Days. A number of these were uncomfortably accurate, but it’s good to know that I’m not the only one who finds things tough sometimes.

11. I read a lot more than most Americans.

One survey found that the average American reads twelve books per year. So even though I didn’t reach my (informal) 100-book goal last year, I am still ahead of the curve.

12. My love for Myers-Briggs knows no bounds!

The more I dig into the Myers Briggs personality typing system, the more my appreciation for it grows. I’ve been listening to back episodes of the Personality Hacker podcast, and I loved their in-depth discussion of some of the more complex aspects of the system. My biggest insight from this episode was their method for distinguishing extroverts and introverts. According to their definition, “for extroverts, their outer world is the real world, and for introverts, their inner world is the real world.” This explains why introverts need more alone time: we need space to reconcile outer-world feedback with the way we feel internally. I would never have recognized this on my own, but find it is totally accurate for me. 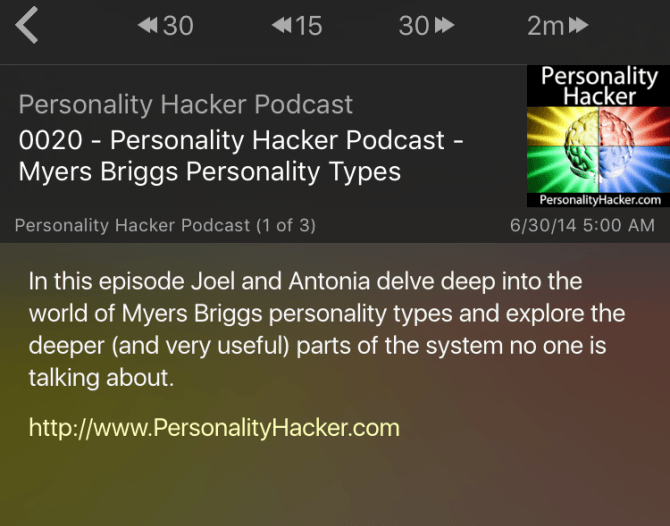 I saw an ampersand symbol on an advertisement recently and thought, “huh, I wonder why it’s backwards.” Then I started seeing it backwards elsewhere. . . including on my computer keyboard. It took me a bit, but I realized that I was the one who was writing it backwards! I’m not sure if I’ve always written it backwards, or if I had it correct at one time and somehow flipped it. Either way, it’s kind of an embarrassing mistake!

In 2013, Time magazine descriped Europe as the world’s spiritually darkest place. This year, our church is focusing all of our missions efforts on this “dark” continent, and between now and November, we are sending 25 teams to Greece, Ukraine, England, and other European countries to run English camps, distribute Bibles, and serve in many other capacities. To kick off this year of “Love Europe,” we’ve been learning about the dire state of the church in this part of the world where Christianity once flourished. I’ve been saddened to learn that 80% of French people have never read, held, or seen a Bible; that less than 4% of Euoropeans attend church regularly; and less than 2% of the European population claims to be evangelical Christian. I am glad that our church is doing its part to bring God’s love back to a people who have all but forgotten Him.

15. I’m fortunate to have a middle name!

I was surprised to learn that middle names haven’t always been standard issue in English. The aristocracy used them first, but it wasn’t until the twentieth century that they became common for everyone else. I had a hard time settling on two names for our Charleston Michael; I can’t imagine if I’d only been allowed to pick one!

16. Yellow makes everything a little better.

I hate the rain. I mean, I REALLY hate it! It’s cold. It’s wet. It’s dark. So basically, it’s all of my least favorite things rolled into one. But here’s the catch: Luke absolutely LOVES the rain, and it makes him sad that I don’t enjoy it. A few weeks ago we had some heavy rain in our forecast, so Luke had a package delivered to our house while he was at work. He texted me telling me that there was a package on our doorstep and that I needed to open it ASAP. Inside was an umbrella, and not just any umbrella: it was a YELLOW umbrella, just like the one the mother carries in my very favorite show! The umbrella also has the awesome feature of an automatic collapse button, which makes it easy to close while carrying Charlie. I still don’t like the rain, but my snazzy yellow umbrella does a lot to perk up my mood on the rainiest of days.

What is one thing you learned this month? Leave a comment to share it with me! And as always, check out what others have been learning over at Emily’s monthly “What I Learned” link up.