C is for Charleston: A Baby Naming Story

It’s no secret that I have an obsession with names. I’ve been compiling name lists since I was a little girl, always in eager anticipation of the day when I would one day christen my own child. Not surprisingly, my husband doesn’t share my name enthusiasm. At various points during our last six years of marriage, I would bring up the subject of naming our future children, but Luke was always clear that he wasn’t ready to commit to a name until there was an ACTUAL child on the way.

When we found out that we were pregnant with Charlie, I brought up the name discussion again. Much to my chagrin, Luke decided to postpone our conversation even longer, telling me that he wouldn’t fully indulge my name talk until we knew whether we were having a boy or a girl. FINALLY, when I was 18 weeks pregnant, our suspicions were confirmed: we were having a BOY, and we could now get serious about choosing his name! 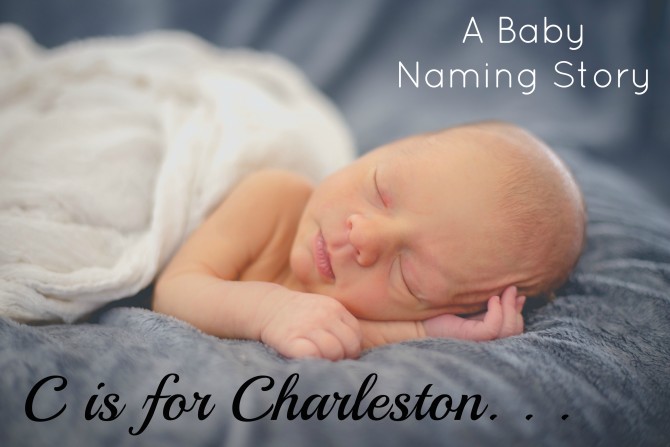 As we began discussing names, Luke and I quickly discovered that we had very different tastes and opinions. Luke has always loved his own name and wanted to make our child a Luke Junior, or at the very least, christen him Lucas with “Luke” as a nickname. I, on the other hand, have never been fond of the idea of giving a boy his father’s name: it seems unnecessarily confusing to have two people with the same name in one household, and with so many great names out there, why on earth would we reuse an old one?! Though disappointed, Luke agreed to branch outside the family pool to pick a name for our boy.

Before trying to pick a name, we settled on a few guidelines. I wanted a name that wasn’t very popular (another reason I vetoed “Luke”), but not totally obscure. Though we liked the idea of choosing a meaningful name, it wasn’t a priority; the sound and flow of a name would take precedence. I didn’t want a name that started with a “J” because our last name begins with a J and I didn’t want our child to have double initials. Also, the name had to work with the middle name “Michael”: it’s my dad’s first name, and the middle name of both of our brothers, Luke’s dad, and his grandpa. With a name that could honor so many family members at once, it was an easy choice for the middle spot!

Because I had a whole slew of names that I loved, and Luke didn’t have any, we came up with a strategy. We set up a shared list on the Trello app on our phones. I added all of my favorite boy names to that list, and then Luke would move the names he liked over to an “approved” list. This narrowed our pool considerably, but we still weren’t particularly excited about any of the names on our list. I was disappointed that Luke had bypassed my personal favorites (Levi, Lincoln, Dixon, and Zyan), and even the names that met with his stamp of approval (Corbin, Colin, Zander. . .) weren’t particular favorites of his.

One day (I think it was after watching “Charlie Bit Me!” on YouTube for the umpteenth time) Luke commented that he really liked the name Charlie. I agreed that it was a nice name, but wasn’t sure I wanted to give my child a “nickname name.” I also didn’t care for Charles, the natural formal name for the nickname Charlie. I filed the idea in the back of my mind, though, and a few days later I was driving along and the name Charleston came to me. I immediately liked the sound, but was it even a name? I looked it up on a Baby Naming site, and sure enough, it was a bona fide name—and a rare one, at that! (Charleston has never ranked in the top 1,000 names in the United States.) It didn’t have an interesting meaning, but I could live with that. 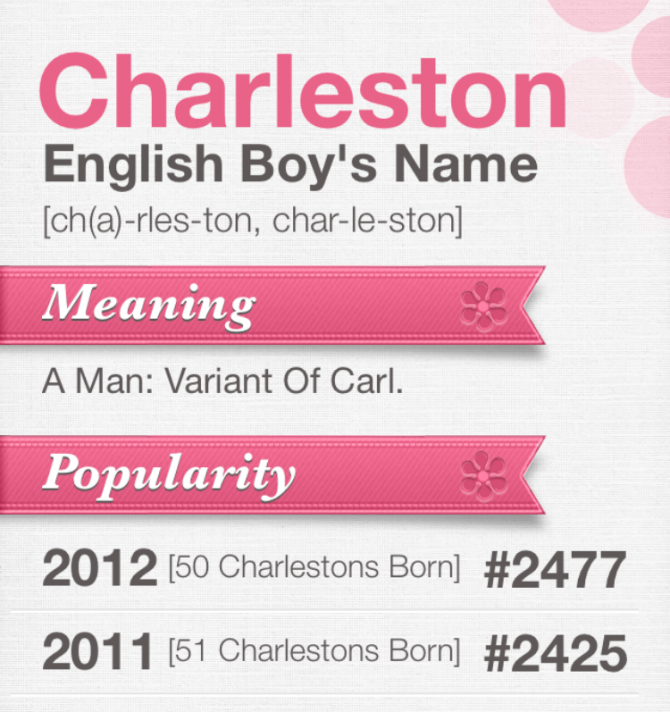 I was sure Luke wouldn’t go for such formal sounding name, but I decided to bring it up with him anyway. Much to my surprise, he said he liked it! We didn’t want to rush into such a big decision, though, so we decided to sit with it for a bit. We gave “Charlie” a trial run, referring to my belly as Charlie to see how it felt. At the end of the week, we new we had our name; after calling our unborn baby Charlie for seven days, no other name felt right!

Once we’d settled on Charleston Michael, we began sharing our name selection with family. . . which is when we ran into a bit of a speed bump. My sister-in-law immediately told us she was going to call him “Chuck,” a name which I hate! Could I really subject my baby boy to a lifetime of being called Chuck by his aunt? I decided to take us back to the drawing board, but we really couldn’t come up with another name we both could live with. So . . . Charleston Michael it was, and poor little Charlie (and his mommy) would just have to deal with the sometimes-nickname of Chuck.

I’ve heard that many parents regret their children’s names almost immediately, but I have to say that I am still completely in love with our name choice. We’re calling him Charlie right now, since Charleston is a pretty big name for such a little boy, but I like that he’ll have options when he gets older; I tell people that “today, his name is Charlie, but I’m sure he will go with Charleston when he runs for president!”

I know my opinion might change in the future (perhaps when five-year-old Charlie is struggling to write out Charleston Jernejcic!), but I can’t imagine being happier with any other name. My only problem now is that, if we ever have another boy, I don’t know if I’ll be able to find a name that I love just as much! If only I could get my husband to start brainstorming now. . . .